“She’ll be like an apple tree among all the ash-colored buildings of that granite city.” 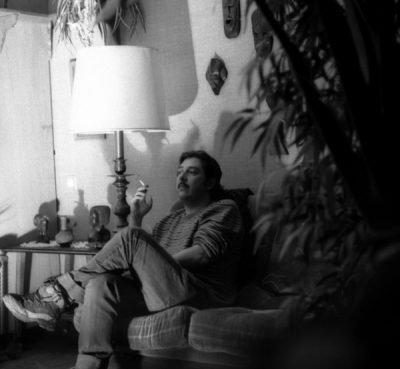 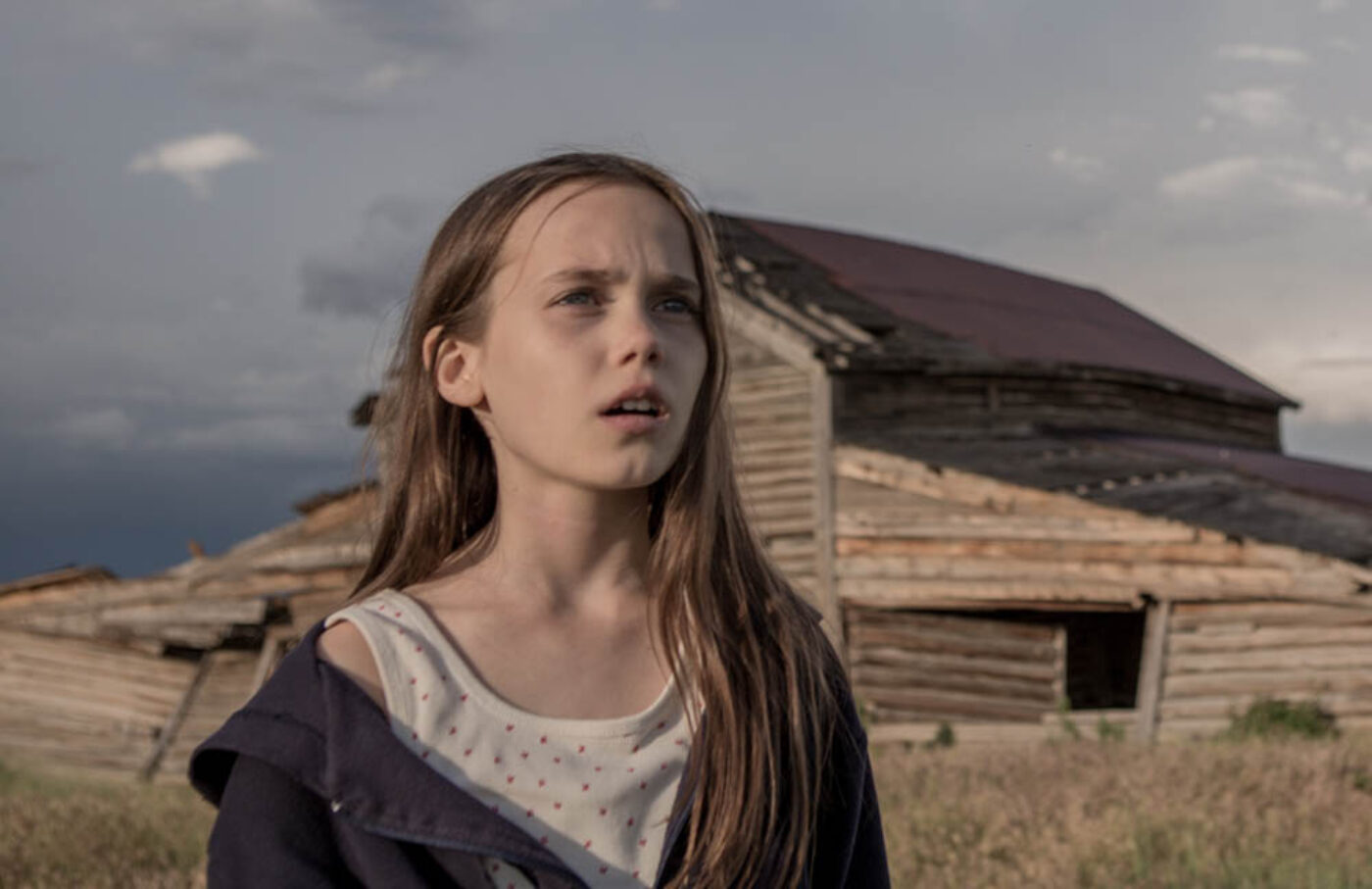 Ross Partridge wrote, directed, and stars in Lamb, an adaptation of Bonnie Nadzam’s celebrated first novel of the same name. The film chronicles an abnormal relationship that develops between David (Partridge), a forty-seven-year-old man, and Tommie (Oona Laurence), an eleven-year-old girl. An ostensible love story, Lamb describes a peculiar platonic bond. Both David—whose father has recently passed away, and Tommie, whose parents may as well have—are depicted as lost, lonely souls, looking for any sort of human connection possible. They find it, of course, in each other. When David takes Tommie to his family’s cabin in Wyoming, the trip reveals psycho-emotional volumes. Their seemingly inappropriate pairing generates a strange power—one cast over the film’s audience.

Partridge, a character actor best known for his collaborations with the Duplass Brothers (Baghead, Do-Deca-Pentathlon) and in the underseen comedy, Treatment, takes a sincere yet distanced approach to this material. He never exploits or sensationalizes.

Gary M. Kramer The relationship between David and Tommie seems somewhat taboo. But it’s handled very carefully and deliberately. How did you approach this unsettling material?

Ross Partridge It was written that way in the book. Reading is always a more intimate experience. In the book, the relationship is never sexualized, but it is so intense, and it’s just hard to consider it cinematically—how far do things go? Your mind wants to identify the relationship immediately, and make sure it’s okay. What I had to do as a filmmaker was not worry about the preconceived notions of the tragedy and psychology of these two people. It’s a “love story.” It’s about the love you didn’t get as a kid, and how that affects you. As rare as it is to put two people like these together, I believed in the goodness in their hearts. They get into complicated situations, but David was never logical. His need was greater than his logic, and that was fascinating to me. That’s what made it “safe.” I found empathy for him in the book. The flaw is what made it real.

GMK Lamb is going to polarize audiences. How do you relate to the characters?

RP I believe that we seek out independent films to truly experience people. Someone at a recent festival said to me: “You can’t put these messages in the world!” And I replied, “These messages? I don’t know what world you live in…” Humans are doing things to one another I can’t comprehend. Where our empathy lies is a great conversation—you can selectively empathize with some things and not others. You can watch entertainment that is far more devastating, where you can tolerate people shooting each other. But I relate to these characters and to the disconnection they feel, even though I might have a better life than theirs. What we want is to be better. The characters are constantly in an existential quandary. That’s why self-help thinking is huge. David wants to be better, but he doesn’t know how to be better. He still wants to obtain it, and that process is what’s most interesting and real to me.

GMK What decisions did you make about the film’s tone in terms of the storytelling?

RP The fact that David’s intentions are so far from reality becomes uncomfortable. The things he does are wrong, if we judge him as an adult. But he’s working through his life as if he’s still a child—it’s an act of make believe. He’s spinning a tale to calm his own dilemma. I’ve been around a lot of alcoholics, and the tailspin of their lives… Well, they are like a bowling ball plowing through everyone. They weave their tales. I’ve listened to them. I love them. And yet, I can’t believe the stuff coming out of their mouths. How will people like these ever find a way out?

GMK What can you say about the way the film portrays loss? David is coping with a lost parent; Tommie is experiencing a loss of innocence. Why does this bond them?

RP Everyone wants to talk about David’s loss, but here’s a little girl who’s also neglected. She stole her own mother’s shoes and purse, and walks over to David in them, asking for a cigarette. She’s looking for attention as an eleven-year-old.

GMK I see David as being in denial-land, as suffering from arrested development.

RP Absolutely. There’s a moment in the film that breaks my heart. David’s holding Tommie and telling her the story of his brother and their neglect. He says, “Please promise me that you’ll always call me ‘Gary.’” It’s indicative of the state of being of the person that he’s not. He never grew into a man because he was so traumatized as a child. He can’t get close to anyone and knows he’s going to destroy everything.

GMK As an actor, how do you play someone like David? He’s both the responsible adult and the kid out for adventure, making a game of things. You tend to do comedy. Was this a stretch for you as an actor?

RP I’ve been playing so many screwed up characters lately; it’s nice that you remember my comedy! Comedy or drama, it’s just playing honestly to the situation and circumstance. What I didn’t want was to focus on David’s deception. I had to make sure he was honest and okay, and doing things for good reasons. You never have a moment where he is sinister. Even the most sinister characters aren’t attempting to be sinister; they just are. But they are other things, too—humans, not caricatures. They are real people. Everything David says, he believes. You have to play that small, and simple, and natural, and stay neutral, not putting a spin on it. I wanted the simplicity and smallness of their lives and the nuance of their psychology.

GMK Do you think David corrupts Tommie or saves/protects her?

RP That’s the question! Is he a pedophile? My own thought is that this situation is so wrong; it’s like Lolita. My immediate response is, “If this is a film about a pedophile, the film would be over in ten minutes. Why would I want to show that?” The odd part is that it’s a Rorschach test in how people react. I don’t think I would have made this film if I thought he corrupts her. When we auditioned Oona, her mom read the script, and she called Oona’s dad, saying: “She has to read this! I know she’s going to play the role.” Her mom understood it. I was worried that the parents wouldn’t understand the approach, the intent, and why we were telling this story; it gave me a lot of confidence when they did.

GMK Do you think David is fearful of the consequences of his actions? Why do you think he behaves the way he does, and why does Tommie become his co-conspirator?

RP I do think he is fearful. Again, he’s caught between logic and need. It’s like pulling a muscle—the pain throbs, you forget it for a minute, then it hurts again. He’s aware that this is not right. It’s a pact. He tells her in the first hotel room, “You need to think about your decision to stay.” It’s manipulative. He needs it so badly that he is willing to risk anything. What happens in the end? His life is changed. He’s hoping it’s a healing process. But he knows it’s not for him. It’s for the innocence of the childhood that could have been.

GMK The language in the film is very precise. How did you think about the text in adapting the novel?

RP David’s doing what he can to make things possible. It’s manipulative. It’s not a logically correct thing to be doing. It’s his salvation, his last attempt to leave something behind and do something—though how he goes about it is skewed and wrong. He says: “She is beautiful and strong, and she’ll be like an apple tree among all the ash-colored buildings of that granite city.” His language is so above the world he lives in. The beautiful things he finds are in his fantasy of the life he wants—the essence of the blades of grass and what he shows her. All of that aside, it just doesn’t matter. He can identify these things for someone else—some other life. That’s the tragedy. But we’re stuck in ourselves, and we can’t appreciate all those things all the time.

RP I think I’ve had a lot of perfect moments, but the most perfect is when you can be content with your perfect moment and not look for the next one or have that angst of having to find it.

RP At this point—I’ll take any excuse to get rid of my phone. I grew up in upstate New York, and my best friends and I, to avoid our households, used to run away and go camping and fishing. We’d hang out and try to steal beer. So I love the outdoors. And Wyoming… My fiancé and I were driving through Wyoming on our way to Sundance one year. I got out at a gas station in January, near where we ended up filming Lamb, and I got outside and thought I’d never felt anything like this before—so open and vast and beautiful. It went on forever. I love it. Those landscapes! I couldn’t shoot enough B-roll!

GMK What’s the benefit of making a low-budget film on a difficult topic?

RP It’s great to get a reaction that incites so much conversation. They’re stunned and can’t deal with it—and a week later they email me. I made another film, Interstate 84, which was like my film school. I pieced together the script quickly. And it was a hard lesson—but film is a powerful medium. What do I want to say? People might argue that Lamb has no great message, but I felt it instinctually. These characters and their love are so damn complicated. I knew I had to do it. It’s one of the few places and times in my career I was without fear. It’s crazy to put this out there, in the indie landscape, but it’s a journey of daring to create art. The higher the mountain the greater the view. Good small films are small because people regard them as small.

Gary M. Kramer is a freelance film critic and the author of Independent Queer Cinema: Reviews and Interviews, and the co-editor of Directory of World Cinema: Argentina.