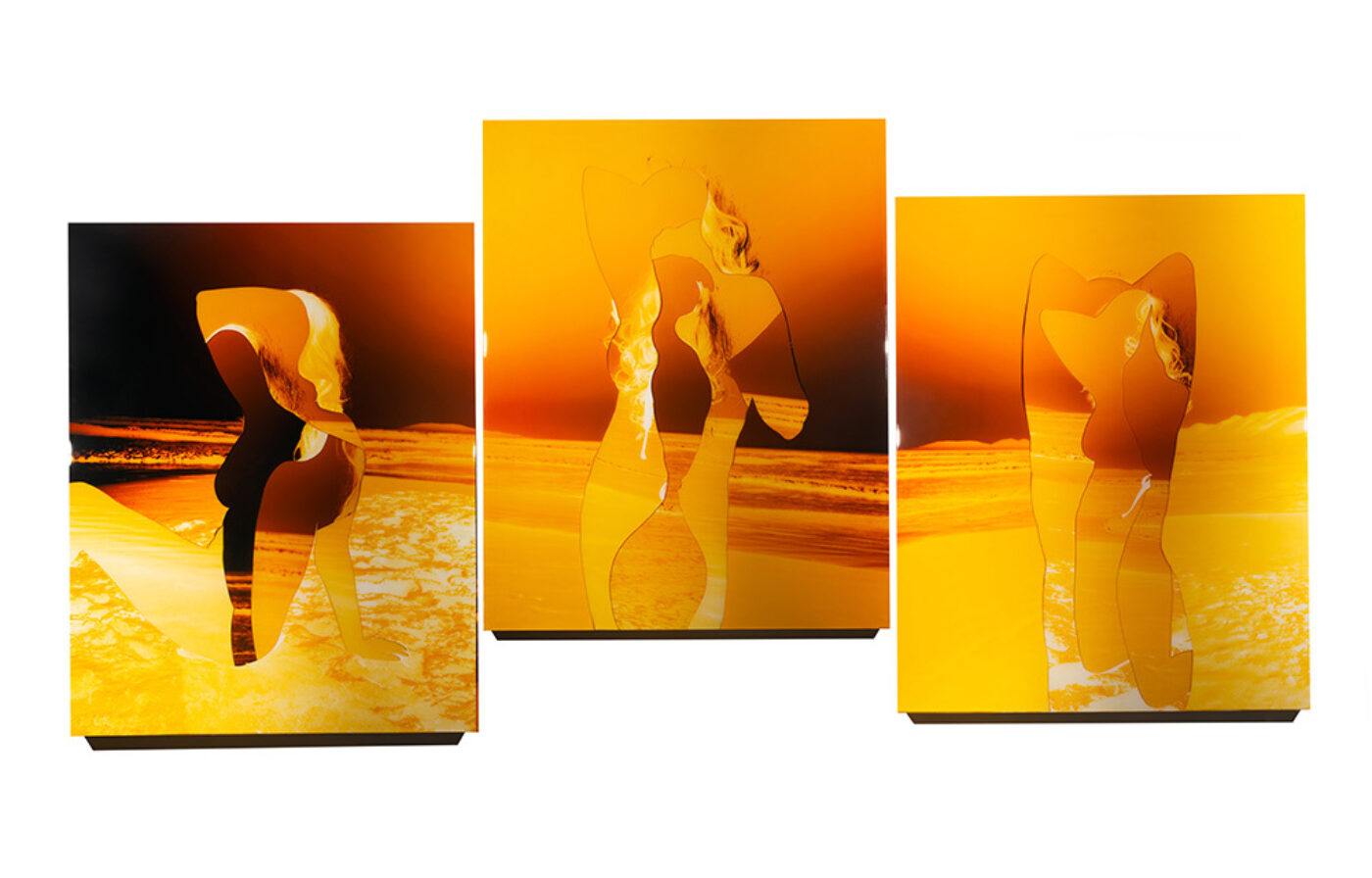 Natalie Krick is a photographer based in Seattle, Washington. She won the Aperture Portfolio Prize in 2017 for her series Natural Deceptions in which Krick photographed her mother, her sister, and sometimes herself in poses inspired by fashion and celebrity photography. Krick also restages her own family photos, giving visual expression to that uncanny experience of seeing oneself in one’s ancestors. She flips the script here, too, casting her mother to play Krick’s younger self, highlighting cultural prohibitions surrounding age and the performance of sexuality. Krick’s photographs often incorporate optical illusions, sometimes created in the studio and sometimes in Photoshop, which further defamiliarize these popular photographic tropes and the cultural assumptions they reveal about women’s sexuality and beauty.

Kim Beil I don’t usually ask artists about what images they looked at as children, but it feels relevant here because some of your work references your earlier awareness of photography. Some of your work takes your own photographs, made as a teenager, as models or inspiration.

Natalie Krick My parents were pretty strict, and I wasn’t really allowed to consume a lot of popular culture. But I still had an understanding of female beauty. I remember really wanting blonde, curly hair! It’s like the late ’80s, early ’90s idea of femininity. There was definitely a shift once I was a teenager, and then, all of a sudden, I had access to popular culture that was off-limits before. I made a notebook full of pictures of Leonardo DiCaprio.

KB Pictures you ripped out of a magazine and pasted into a notebook?

KB Wait, you had binders full of men?!

NK Just a binder full of Leo! But of course I was also looking at pictures of women. I must have been thinking, Oh, in order to be desired by this heartthrob, I need to be desirable in this way.

Britney Spears became popular when I was twelve, and I remember poring over these images of her. They were shot for Teen People by Jill Greenberg in 2000. I don’t think I really understood what retouching was, so I was like, Wow. How is she so perfect? How can I be perfect like that? And so I made pictures of me posing after pictures of her. I was obsessed. I didn’t really care about her. I just wanted to look like her.

KB Did you make those pictures by yourself?

NK Me and my cousin, and me and my friends; we would have these little photo shoots in my bedroom. It definitely wasn’t snarky or ironic. It was just really trying to be this thing. But then in high school I was like, Fuck that! And then, you know, I went to art school and obviously my perception of all of that changed. 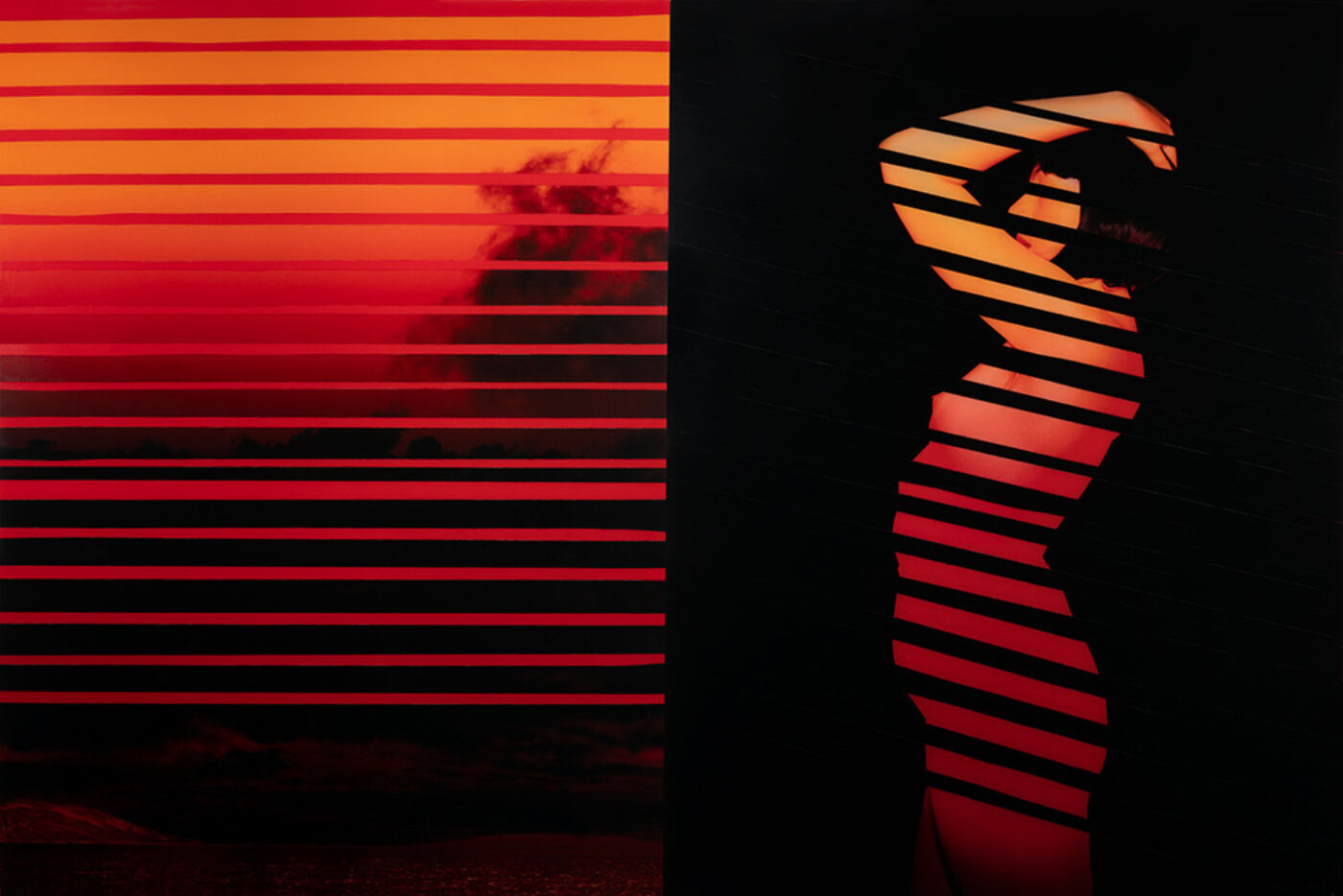 KB Some of the pictures you’ve made over the past few years actually reference those images, right? Or, perhaps this reveals my credulity when reading titles! If those titles are forthright, how do you feel looking back at the source pictures now?

NK I do have an image called Mom As Me As a Teenager, and that is based on a specific image of me as a teenager. I must have just gotten out of the shower, and I’m making this trying-to-be-sexy-face at the camera and partly hiding my face behind my shoulder. For me, when I look at these old pictures of myself at that age, I can see myself trying on these identities that didn’t really fit. It’s really playful and performative, but there’s also an awkwardness to it.

KB I’ve heard you in the past describe your affinity for camp aesthetics. I’m quite taken with Susan Sontag’s argument for the importance of camp—and this was in the mid-1960s. She wrote that “the traditional means for going beyond straight seriousness—irony or satire—seem feeble today.” That feels like a good diagnosis now, too, and one that seems to resonate with your work. You’re never just ironic or satirical. There’s none of that nasty edge. Your critique is powerful, but it’s also playful.

NK Yes, playfulness is really important to me. For a long time I was interested in hyper-femininity and artifice. So I was interested in images of women that I thought were easy on the eyes, but I wanted to create a viewing experience that was more complicated. I was starting to make some collages, and then I started to put some of the pieces of the magazines that I was collaging in front of the lens. I think that’s when I became interested in this idea of making an image that was a little bit confusing to look at. 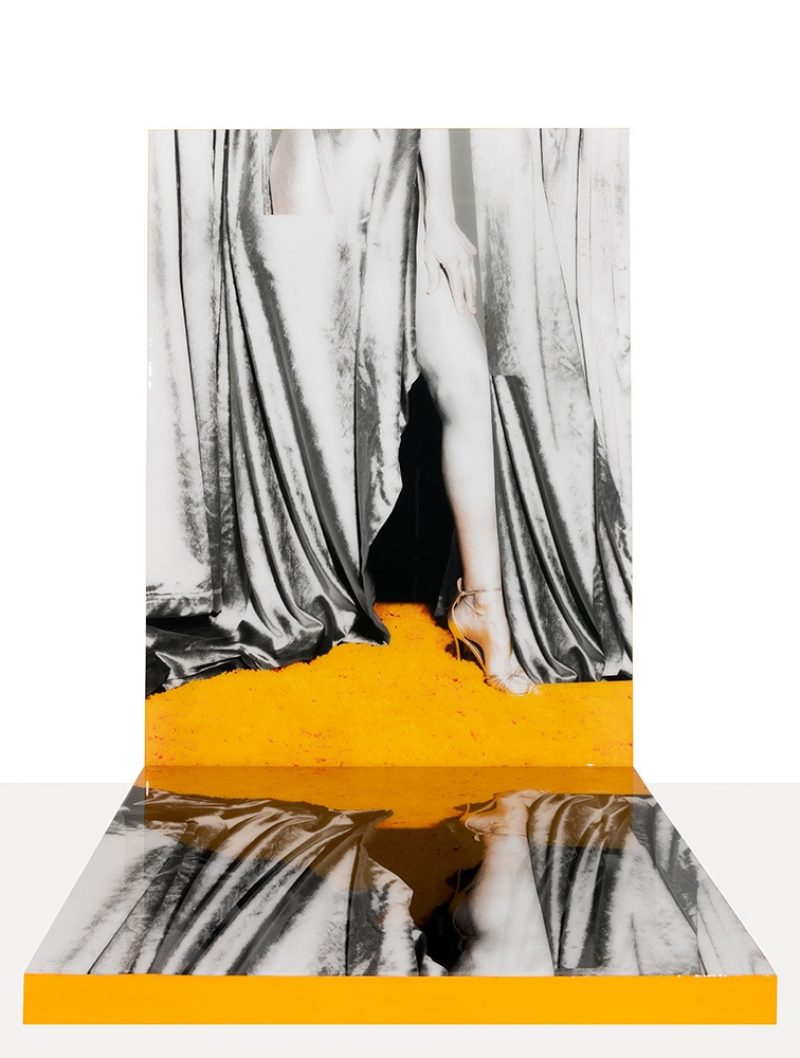 KB Yeah, that makes a lot of sense. When you photograph another photograph as a three-dimensional object, it’s no longer clear what’s flat or what’s a representation of depth and where the depth actually is in the original scene. Can you tell me a little bit more about how you work in the studio?

NK I almost always have an image that I’m referencing, frequently from culture, but occasionally a family photograph. Then I’ll remake that picture, usually using my mom, or myself, or my sister. I look at a lot of images. I save them and return to them over and over. I print them out and put them on the wall of my studio. And then there are the images I see that float around in my brain and end up coming out in my work in a way that isn’t intentional. A piece always starts with a reference image, or often I’m pulling from multiple images. I make photographs based on the image, trying to disrupt it on some level through making my own version of the picture. Then I play with the resulting image, sometimes digitally, sometimes rephotographing the image, sometimes physical collage, sometimes all of the above. Lately I’ve been interested in creating layered illusions, pointing to the trickery in different layers of the picture-making process.

KB Some of your illusions in Natural Deceptions are so complex and convincing, like Spread. Is it hard for you to see illusions in an image that you made yourself? Do you have to involve other people and ask them if the illusion works for them, too?

NK Sometimes it is hard. But I get really happy when someone says, “Oh, I thought I knew what I was looking at. And then when I looked at it longer and closer, I realized it wasn’t that at all.” 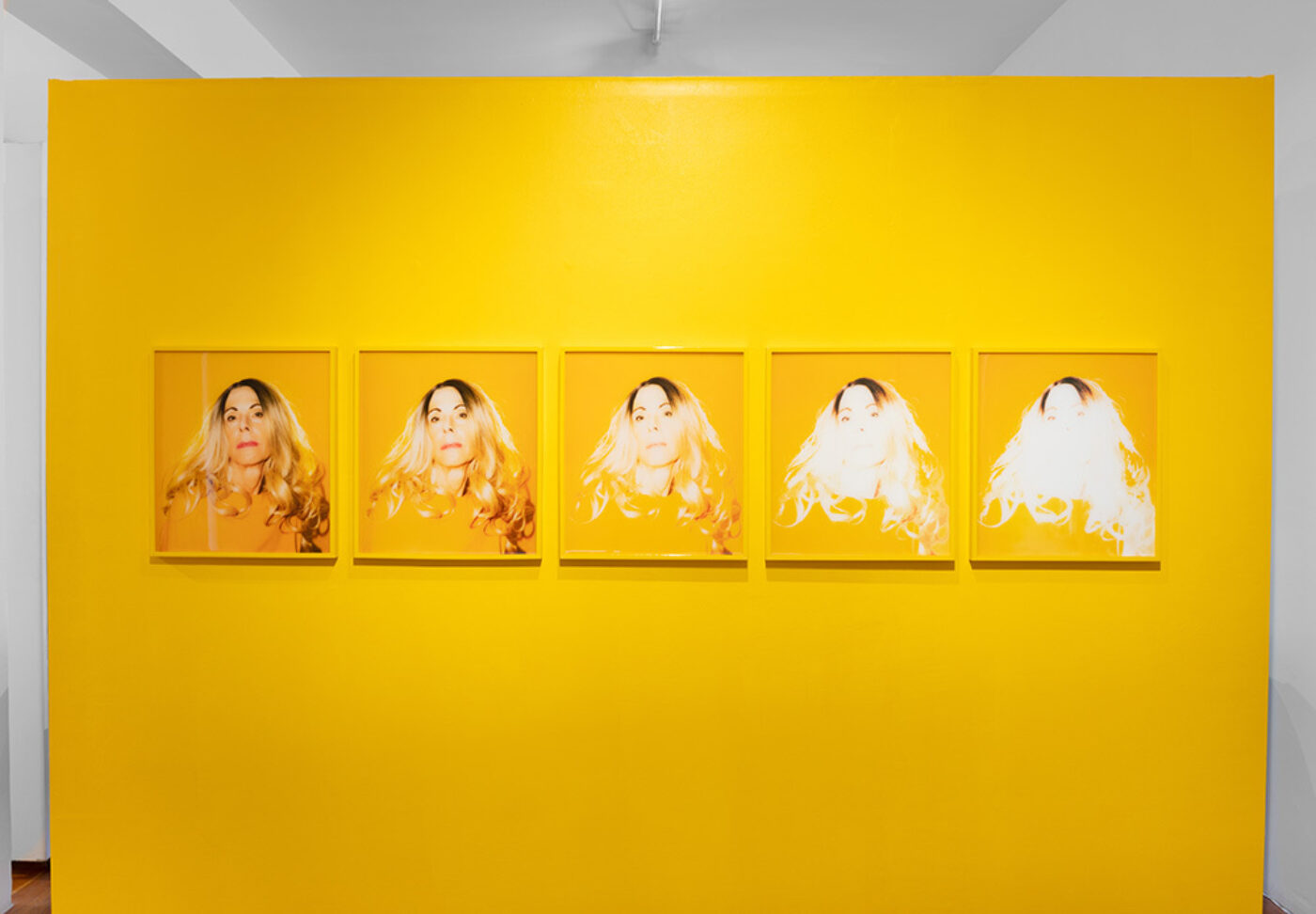 KB I think that’s what makes your pictures playful, but also subversive. They are traditionally alluring, with their bright, saturated colors and their glossy surfaces. But they seem to do their real work once the viewer is already engaged in the picture. As a viewer, you get a double shock from realizing that the picture is not what you thought, but also that the person you’re looking at is not who you thought. In a lot of cases, this comes from posing your mother in a sexy pose that is often reserved for younger women.

NK Yeah, I have this picture Mom with Skittles in Her Shirt, and I made it because there was an episode of Sex and the City in which Samantha has these fake erect nipples, and she uses them to attract men. And I thought it would be funny to make that image with my mom using Skittles. It’s meant to be kind of ridiculous and show that sexuality is a performance. But I remember this man viewing the image, and he told me, “She should be embarrassed that her nipples are hard.” Which is so ridiculous! He was obviously made uncomfortable by the image. Maybe by the fact that she’s older? Or because erect nipples are supposed to signify that she’s turned on? But nipples can get hard when you’re cold! He’s making all sorts of assumptions about the image—and about the model. I know I’m provoking that response, but sometimes it can really throw me when people feel it’s okay to say those things about the images.

KB Your title reveals the jokiness of the situation, even if it also reveals more information that makes a viewer like him uncomfortable: these are pictures you made of your mother. They challenge our understanding not only of who gets to be sexy, but who is allowed to see them that way.

NK Right. I don’t think the fact that I’m a woman photographing women through my female gaze is enough. That’s why I’m trying to make these images that are complicated to look at.

Natalie Krick: Rhymes of Confusion is on view at SF Camerawork in San Francisco until March 14.

Kim Beil teaches art history at Stanford University. Her book, Good Pictures: A History of Popular Photography, will be published in May 2020.