Redshift at Galapagos by Jeremy Mage 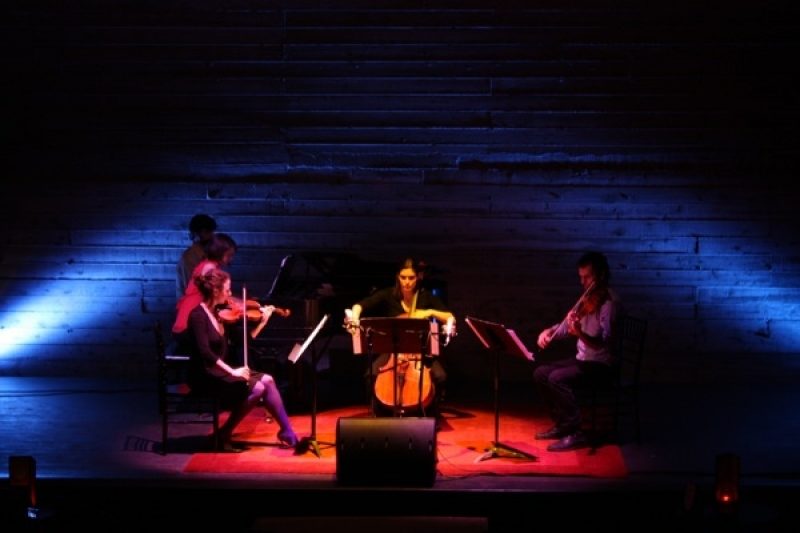 On February 19th at Galapagos Art Space, bicoastal chamber ensemble REDSHIFT gave their New York premiere of Natural Vibrations: Music Inspired by Nature, a program of music by contemporary young composers. The group was cohesive and powerful, coming off a one-week rehearsal retreat in San Francisco, culminating in performances there and in New York.

Beginning with the rumble of the lowest notes on the piano and evolving into rhythmically cycling ostinatos in the strings, the work alternately evoked tectonic movement and the burbling of a stream. Jeff Myers “Vertigo” for solo violin employed complex harmonics on the instrument. “Evening,” by James Holt, opened with cello and bass clarinet chasing each other’s short patterns in unpredictable and compelling rhythmic bursts, and working towards a profound, potent stillness. The growth of plants, seemingly haphazard, but ultimately governed by laws of attraction, was conjured brilliantly by the fractured polyrhythms and multiple focal points in Max Stoffregen’s “The Delicate Flow of Vines.” Mason Bates (aka DJ Masonic) “Red River” was executed with stunning accuracy and fluidity, as the ensemble played along to a prerecorded track of electronic glitch beats and sounds from nature. Ian Dicke’s “White Parasol” for solo piano was a powerful, dystopian take on the spectre of global warming and melting shelf ice. I talked to Dicke afterwards about the virtuosic interpretation by REDSHIFT’s newest member, Kate Campbell.

Ian Dicke She’s an incredible pianist, because not only is there a technical, virtuosic preciseness to it, but she is able to get, at least I heard, four or five different colors out of the piano. Whereas when I hit the piano, I hit a note, and it sounds the same every time. But you can tell not only did she spend time getting the piece down, she spent time like an impressionistic painter, with a different color for each layer. There are a total of four layers going at one time at certain points, and each one of those layers had a different color!

JMThe independence of the timbres was really striking. It started out with the left hand in this sort of quiet zone and the right hand kind of strident. To me, that section felt like the left hand was this sort of fairy tale we’re telling ourselves, that everything is going to be okay.

JM Or sort of the narrative of a benevolent planet. And the right hand was sort of a nightmare of where things could be headed…

ID And then the beginning is just a descent, going lower and lower and lower, scarier and scarier. And the way she does that is just incredible, too, how much faster it gets…I wasn’t even expecting anyone to ever play it that fast, but she did, and it was great.

JM In terms of notation: the rhythms of the right and left hand in the opening section seem so independent.

JM Is it rubato, or is it a specific polyrhythm or…?

ID Another thing I could tell you about her playing that’s great…It was very precise with everything that was happening, but she also did take liberties here and there where it fit. But the rhythms themselves are actually written out exactly, so it’s not rubato. I probably could have done some of it that way, but I actually wanted specific interplay between the layers, so that involved using quintuplets, and triplets, things like that…

JM Is there anything else you’d like to say about the piece?

ID I just hope that we hear it thirty years from now, and we think, ‘Oh yeah, that was when we were having that problem’

JM “That was a scary time!”

ID “That was a scary time! And that piece is reflecting that scary time.” Not that we hear that piece and we think, “Oh…” Or…actually, we don’t hear it cause, it’s already over. 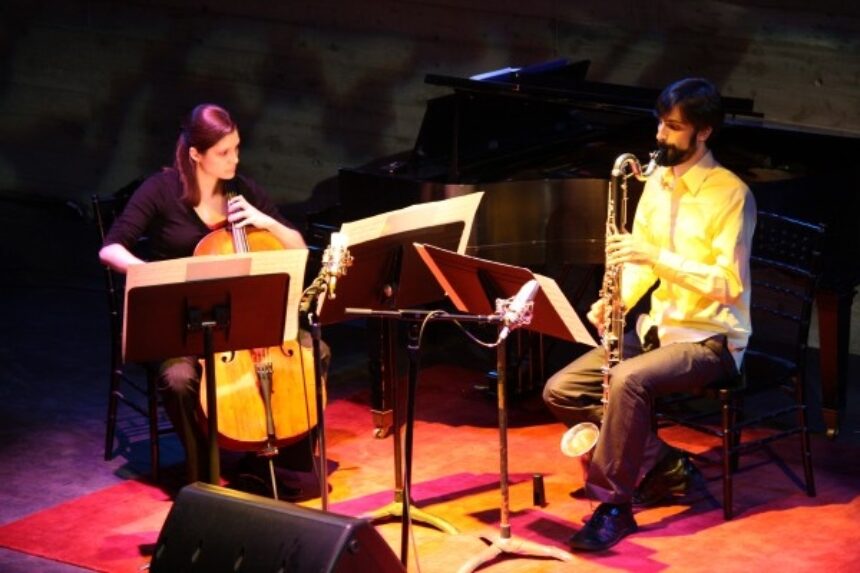 I spoke with Rose Bellini, a founding member of REDSHIFT and the ensemble’s cellist. We began by talking about the air of exclusivity that the ensemble strives to transcend.

Rose Bellini There’s definitely a new music scene that we feel we have a lot in common with, we have similar interests, and we collaborate with a bunch of those people, but we really just wanna do our own thing… We don’t want to make it about the scene, but about what we happen to be doing.

JM Yeah, I sensed that. And I was really struck by how vital, and how…unapologetically epic a lot of the material was tonight.

RB Epic is a word we used to describe the first piece (“Valley of Fire”).

RB And it’s a shame that that piano is so small.

JM Well, you know what? It sounded great in the room.

JM Yeah. I mean I’m sure, the resonance of it….

RB Yeah…you can imagine on a nine foot Steinway, though.

JM Especially the very low notes that start the piece.

RB We were spoiled because we were actually rehearsing on a nine foot Steinway, and then we show up to perform on a relatively tiny baby grand.

JM I can see that. I mean, the lowest notes on this piano, they’re barely even notes.

RB They don’t have much meat, you know?

JM But, it’s kind of more dissonant, in a way…

JM That kind of has it’s own appeal.

RB Yeah, but epic is a great word.

JM I felt that way about a lot of the material.

RB I think that the inspiration…

JM …lends itself to that.

RB From nature and the environment. That is epic.

JM Most of my own writing comes from that.

JM Yeah, when I write instrumentally, definitely. What was the genesis of the nature-inspired program?

RB It came from the group’s joy in discovering the music of composer John Luther Adams, a native of Alaska (as is our violinist, Andie Springer). Adams’ music often confronts environmental or specifically Alaskan themes; but unfortunately, none of his works are scored for our ensemble’s instrumentation. We toyed with the idea of finding a way to adapt Adams’ music for our group, but ultimately were dissuaded by the composer himself. Instead, we plan to feature his music (hopefully a commission for REDSHIFT) on a future program. But in considering Adams’ music, we discovered some other works with nature and environmental themes that sparked our interest. Even though Adams’ music was ultimately postponed, we stuck with the theme.

JM It seems to resonate with the ensembles sensibility. Are you going to pursue the theme further in the future?

RB We have a program in the works for 2011 that will involve newly-commissioned works in conjunction with field recordings of Alaska arctic animals. Andie Springer (our violinist) has been searching for a way to connect her love for Alaska with her work as a musician, and ultimately the project will turn this pursuit into reality. All of us have a more than friendly attitude towards nature, green living, and the outdoors, so these kinds of programs might become a regular priority for the ensemble going forward.

JM So, is there a recording to come of this material?

RB I will most likely put some excerpts on the website from tonight. If we like it.

RB Oh, that’s inevitable. We would much rather play in a venue where the audience is more comfortable, and they’re not aware of this wall between us and them so much. And they should feel free to have a drink, enjoy themselves! We’ve played in a lot of galleries, in San Francisco and New York, and it’s so much more fun because we actually walk around and talk to people, and then we just sit down and play! And we’re this close the audience. That is our favorite thing. To get rid of those stuffy barriers between the audience and us…as if we weren’t regular people too!

JM That’s great! It just sometimes leads to a ‘Ka-ching’ of a cash register during the decay of the last note of a piece!

RB Sure, why not? And the fact that Galapagos Art Space is a “green” building was a happy coincidence that inspired us to designate a charitable component to the program, namely planting trees following the performances in both cities through www.mybabytree.org.

JM Right, “A tree for every twenty names on the guest list”.

RB Yeah. The other thing that we feel really strongly about, other than having less boundaries with the audience, is picking music that can be presented to audiences that aren’t necessarily fluent in new music or in a scene…that maybe have heard new music before, and they’re scared of it, or they have pre-conceived notions about it being ugly, or not being enjoyable. We try to present programs of music to convince them otherwise, or at least give them a positive experience! You know, if they like one piece on the program, that’s great. If they like even more, it’s a total success.

JM Well, it was certainly accessible music tonight, as new music goes. I mean, a lot of melody, a lot of rhythm…

RB I mean, we don’t play ‘all pretty music all the time’, you know? But if it isn’t immediately accessible, we’ll try to say something to give the audience an inroad into appreciating it in some way. And then maybe they’ll go to see more new music, not necessarily us, but it will change their attitude…

Next up for REDSHIFT: an appearance at the Soundwave ((4)) Festival: Green Sound, reprising their interpretation of Mason Bates’ Red River, at The Lab in the Mission District, San Francisco, CA on July 16.

Jeremy Mage is a composer and musician living in New York City. Check out his work at http://myspace.com/jmagemusic.