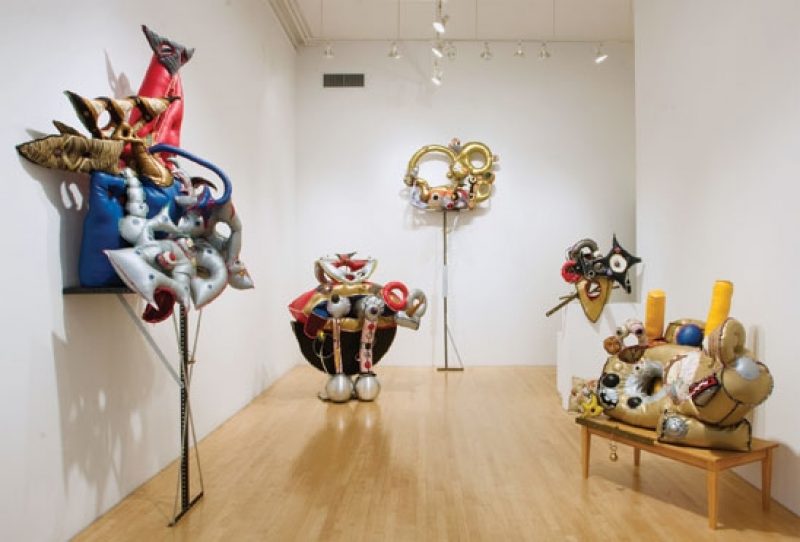 R. M. Fischer, the sculptor known in the ’80s and ’90s for creating lamps from wholesale kitchen equipment and various fasteners, has more recently started making work that is wild and funky—vinyl cloth sewn together with ever-so-visible seams. Work that was once Art Deco flavored, Flash Gordon futuristic, and highly symmetrical is now floppy-marionette cock-eyed, with a tinge of an outsider’s naiveté.

Every piece begins not with an abstraction but a face, loosely. Granting Fischer’s assemblage some of the intrinsic meaning the face has gained through its aeons of depiction, this is a good place to start, an excellent way in. His faces feature cartoon eyes popping out of the head in surprise, or frustration, or amazement, or longing, and tongues lolling out of the mouth in nauseated disgust, or lustful desire, or sloppy exhaustion. 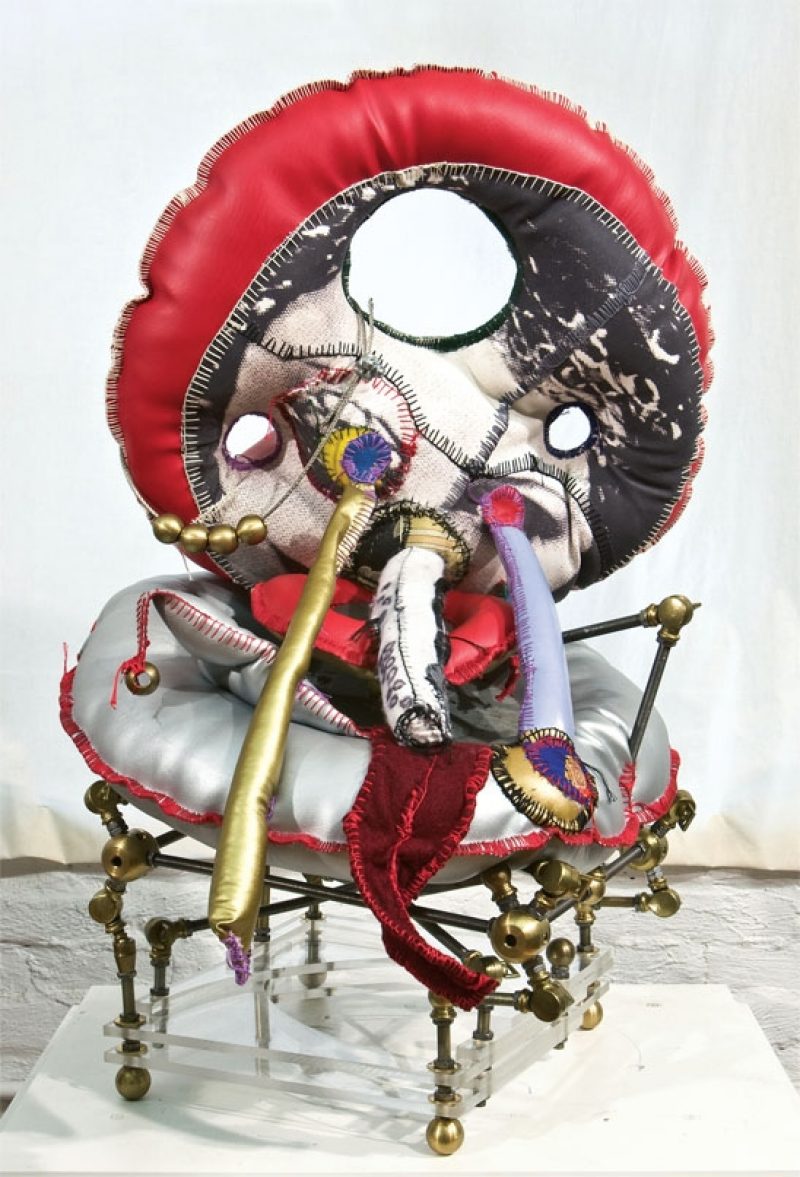 Hard and soft, industrial and playful, in Fischer’s sculptures disparate textures are whimsically fused. Brightly colored fabric polygons are stuffed and sewn together, then combined with washers, bolts, yellow tubing, and coiled gold wire. Some are given legs of steel or cement; some are hung on the wall by their extremities. The result is a cast of characters that could star in a modern-day commedia dell’arte. Well, almost, because these characters aren’t exactly stage ready. In their lopsided, awkward, and gangly forms, it looks as if their felt flesh can barely contain what it covers. Each stitch is a poem to bad sewing, as if made by a giant who was all thumbs.

For the most part, I have been bored by the current prevalent ways of making sculpture—the assemblage of everyday detritus and lowly construction materials. After dozens of years in dozens of galleries, the slapdash aesthetic of the glue gun fails to spark interest. But after years of constructing more disciplined, formal pieces, as well as numerous major commissions, Fischer knows the ins and outs of fasteners, cables, plastic tubing, nuts, bolts, washers, and of thumbscrews, threaded rod, flanges, U-bolts, rope clips, eye bolts, you name it. He is inside this kind of work in a new and possessive way. He uses a plethora of techniques to join things—industrial, handmade, domestic, ad hoc, jerry-rigged, MacGyvered, conventional, or improvised out of necessity—and thus their inventiveness feels complete. 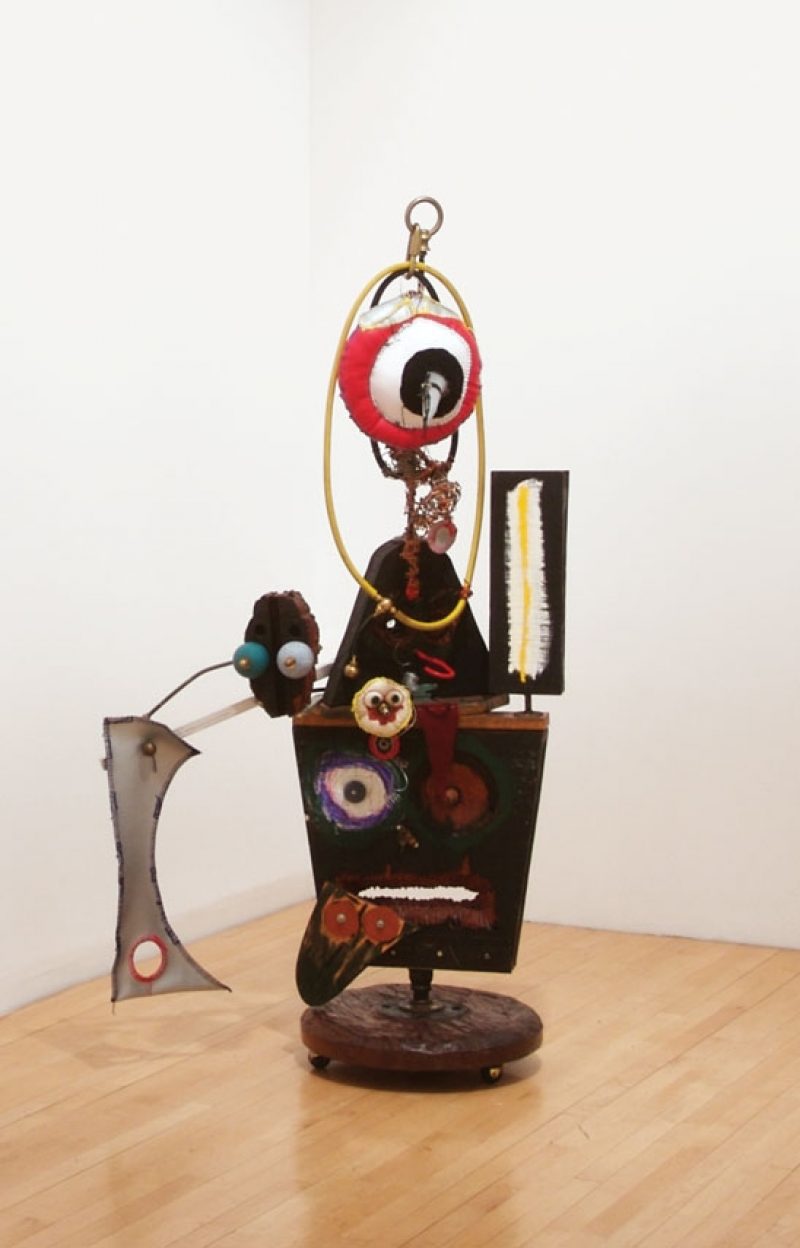 It moves me to see a mature artist reinvent his studio practice after a long and productive career. As an artist, I don’t look at artwork like a critic analyzing it in reference to a history of art—I look for what I can use. This may seem an overly selfish perspective on art, but I find it analogous to a good conversation when another’s comment provokes a suddenly clarified response. Fischer’s work makes me want to respond in kind—to match his intensity of invention, to tap an equivalent urgency to push sculpture forward, as if he were telling me, Don’t be so uptight, let go and see what happens as it unfolds in the studio. And so it is the spirit of the work that matters as much as anything, as it inspires and gives me hope for the future of sculpture.

Daniel Wiener is an artist living and working in Brooklyn. Known primarily for sculptures, he also works on watercolors, 3-D animations, and website design. His sculptures were recently exhibited at Lesley Heller Workspace. 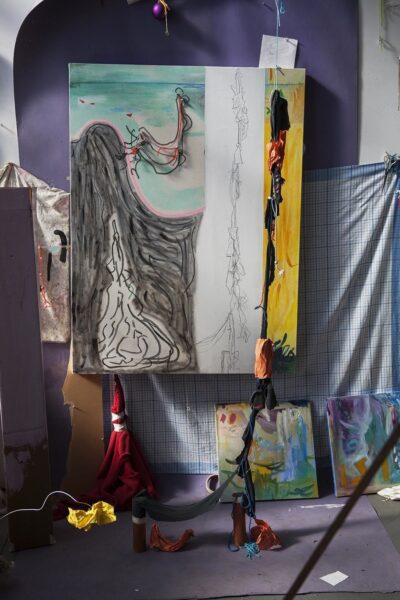 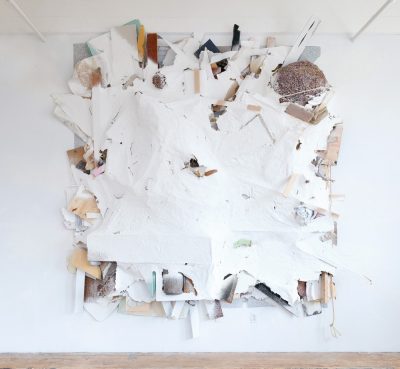