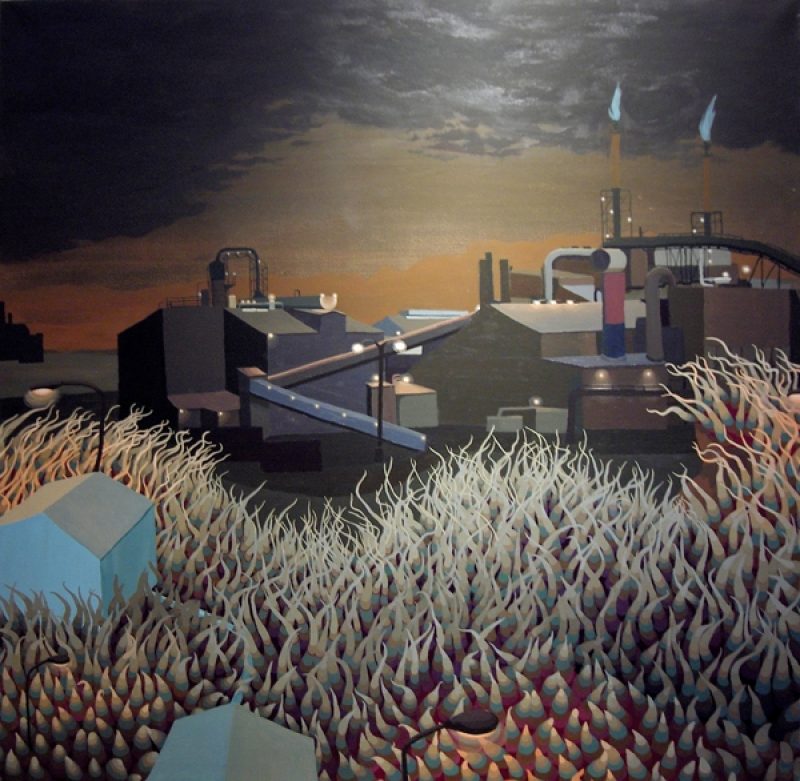 We leave the back door open even though we ain’t supposed to. It gets hot as hell in here with the machines runnin’ all day and night. What we’re doin’ is makin’ brake hoses for hogs, so I’m runnin’ one machine while Terry’s to my left, only a few inches away, runnin’ another. He does his thing, passes the part to me, I do my thing, and pass the part to Sam, who’s behind me at the next machine. From where I am, I can see the back door perfectly. It’s only about 30 feet away.

Sandra’s right by the back door bendin’ tubes on the bender. She does this so they’re the right shape before we get ‘em. Anyways, her back’s to the door, and y’know I always figured we’d have an animal come in, like a dog or cat, or even a coon or squirrel. Most of the time it’s bees or wasps in the day, and moths or mosquitoes at night. And they say there ain’t bears ‘round these parts, but that just ain’t true, cuz I’m lookin’ at one right now.

Terry’s lookin’ down at what he’s doin’ and don’t notice a thing. “You ever think about how the hottest chicks—I mean the hottest of the hot—are named Cindy?” he says. “Cindy Crawford. Cindy Margolis.”

Usually I’d nod and agree. This time I’d smile, picturin’ the women in my head. But I can’t. I can’t move. I can’t say anything.

Finally I hear screams, over the roar of the machines, after Sandra’s layin’ on the floor not movin’ while the bear chews on her. Screams after her blood coats the floor like spilled paint. Terry and everybody else ‘round me sees what’s goin’ on and runs away.

I stay and keep makin’ parts. I shouldn’t, I guess, but Terry’s got a pile waitin’ for me and I’d like to catch up. And they want a hundred an hour, so I gotta hit my quota so I don’t get in trouble. I talk shit to my friends in here, but when it comes down to it, I’m a big chicken when the bosses are around. I don’t wanna get in trouble. Eventually my boss John comes back and yells at me to come on, to go to the break room where they’ve

locked everyone in, but I say no, that I gotta keep makin’ parts to hit my quota.

And it ain’t too much later when animal control comes and shoots the bear with tranqs, but it’s too late to save Sandra. It’s too bad, cuz I liked Sandra. I really did.

Amy Casey has exhibited regionally and nationally, and her work has appeared in publications such as New American Paintings, The New York Times, and Juxtapoz. She has enjoyed a fellowship at the Vermont Studio Center, a summer residency at the Fine Arts Work Center in Provincetown, and Ohio Arts Council Individual Excellence Awards in 2007 and 2011. Casey is represented by Zg Gallery, in Chicago, and Michael Rosenthal Gallery, in San Francisco. She lives in a little blue house in Cleveland.