The filmmaker on her latest work, Terra Femme, made up of amateur travelogues by women in the 1930s–50s. 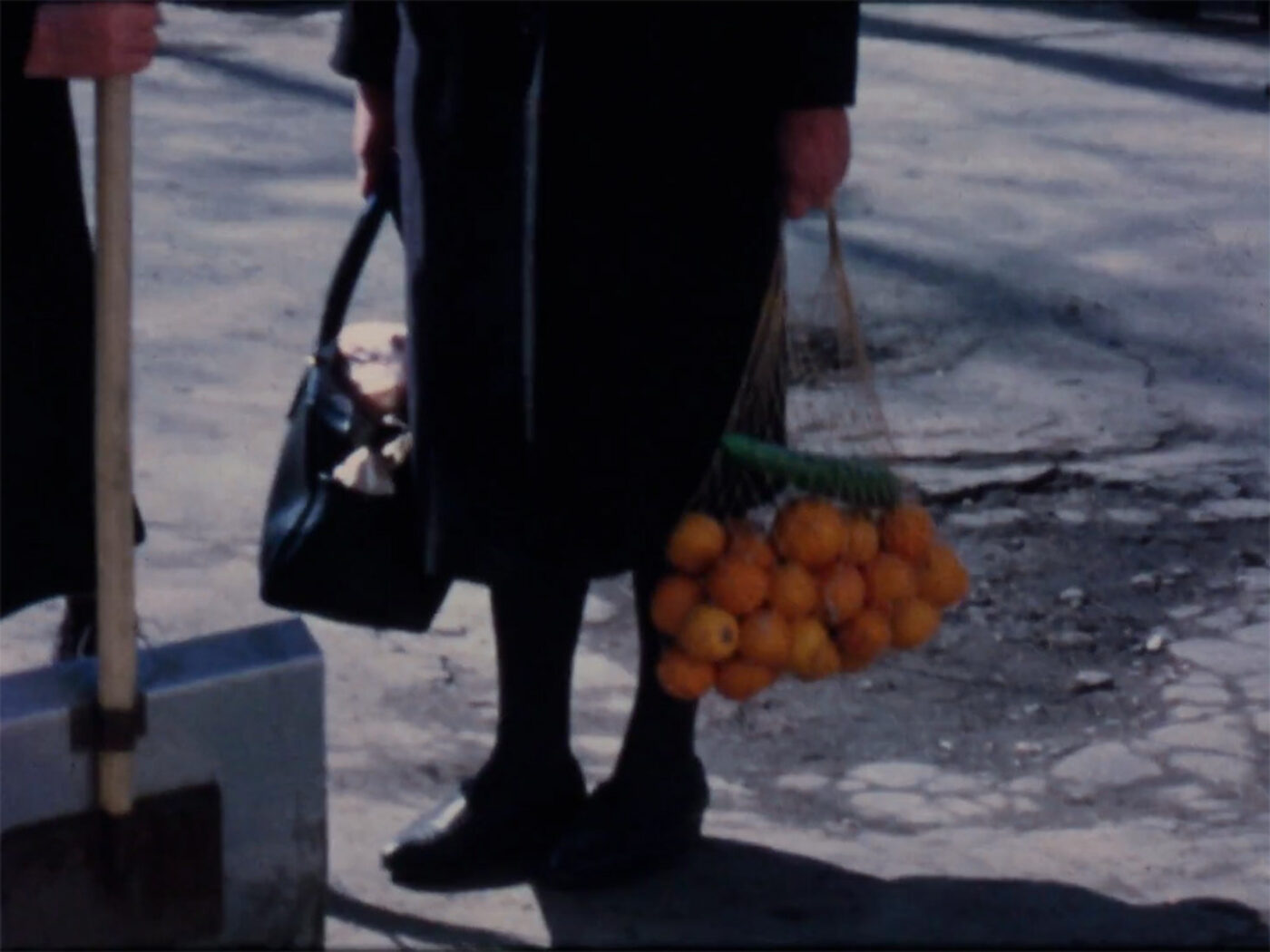 Courtney Stephens is a filmmaker, a programmer, and an educator. Her multidisciplinary projects (experimental shorts and feature documentaries, curatorial series, and writings) reflect a creative engagement with the materiality of film and the act of looking. Like many of her short works, her latest hour-long film,Terra Femme, explores female self-representation through amateur travelogues shot by American and British women in the 1930s–50s.

In 2016 I invited Courtney to be one of my guests for the screening and performance series about spectatorship “What You Get Is What You See,” which I was then curating at UnionDocs. Her presentation, in the form of an illustrated lecture, was the seed of what would become Terra Femme. Collecting and incorporating a wider and wider array of archival films over the years, she continued to present the materials in various iterations, at venues ranging from anthropology museums to the Royal Geographical Society. When the pandemic hit and prevented in-person gatherings, it became a non-fiction feature.

There is an obvious irony that a project about mobility should find its form in a period of severe immobility. After a year of global confinement, presenting Terra Femme as a film, accessible virtually across borderlines, confirms that our sense of place has become deeply mediated. However, the film speaks to much more than the dissemination of media, or even travel itself. By weaving together these archives, Stephens reveals the private yearnings of subjects seeking their place in the world, and the yearnings of a filmmaker seeking these subjectivities. Terra Femme captures a double process of self-learning, making it a perfect reflection of what museum curators like to call time-based media. Lyrical and searching, its layers of reality and thought accumulate, like sediment, into new formations of knowledge.

Courtney and I spoke on the occasion of the premiere of this film at The Museum of Modern Art’s Doc Fortnight, where it will be screening March 29–April 3, 2021.

The first time you presented this travelogue material was at UnionDocs in early 2017, more than five years ago now.

Yes, that event was the origin of the project, making you its godmother!

As the first programmer of the work?

And the person who encouraged me to think about the films through the lens of spectatorship. I had been gathering them as materials to transform, and you helped me see them as documents to decipher. 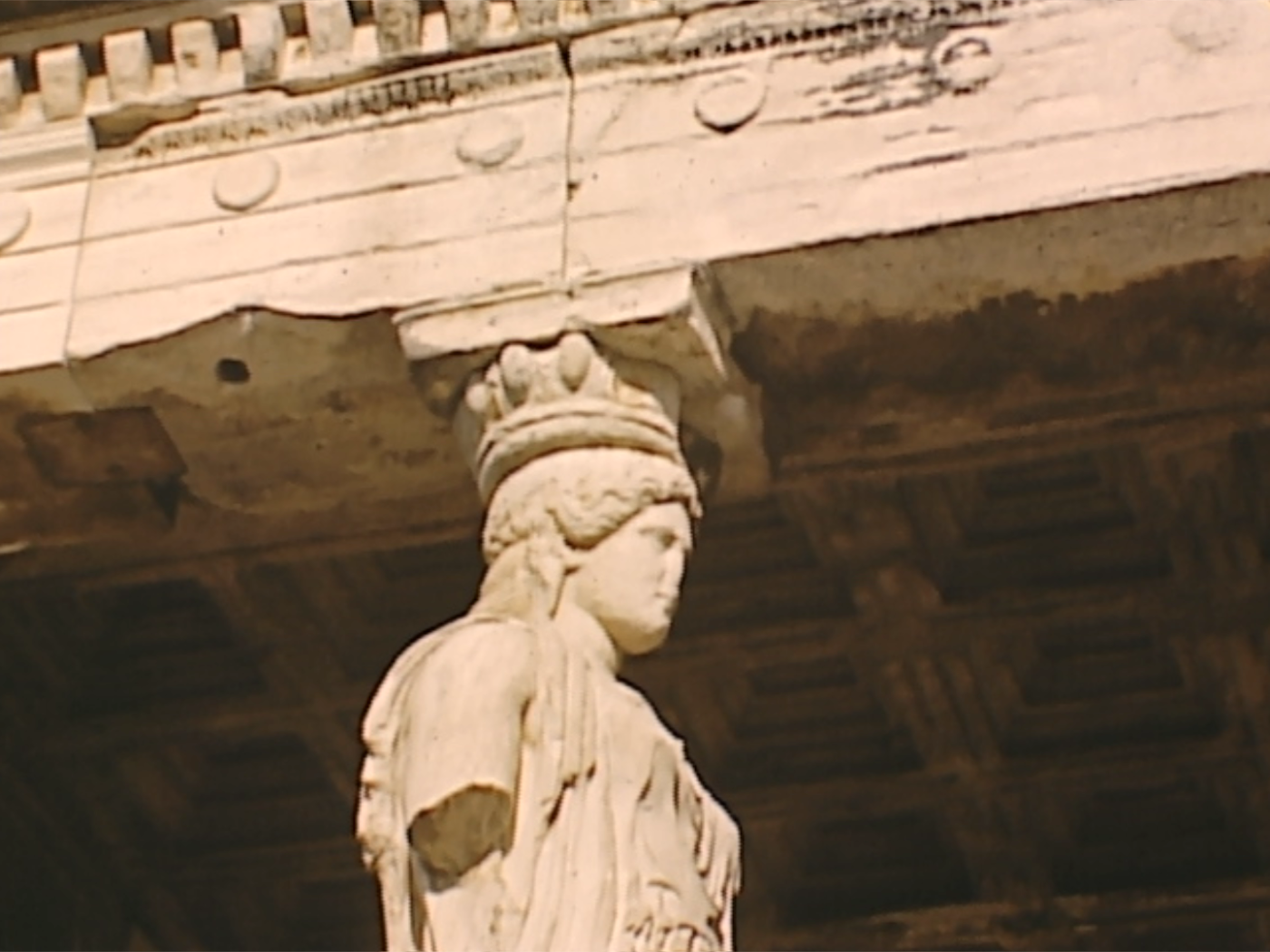 MWBHow has the work has changed since this first iteration?

The first presentation included the films of three women, and the current version has expanded to include about a dozen, but it’s also expanded the scope of what can be considered a travelogue, from anonymous road trip footage to colonial home movies. Presenting the material to different kinds of audiences over time was, in retrospect, a kind of protracted editing process, not the usual editing process. I learned from the audiences, but much of what I learned wasn’t factual information; it was what these films meant or seemed to represent to people, which differed hugely between an audience of older women versus a group of academic geographers.

I hadn’t initially set out with the idea of finishing it in the form of a film, and enjoyed keeping it provisional, of not having a single “take.” The various takes I did have seemed to me irreconcilable. Like, these films are intimate documents of self-discovery, and these films are full of clichés. Or, they are made by low-status makers, but they also reflect an imperial gaze. Those are the tensions that make this collection interesting and challenging. In the end I tried to build something that could hold these paradoxes.

Perhaps not finalizing the film allowed you to acknowledge that you struggled with the materials, like “we are going to look at this together.”

Yes definitely. I like that mode. It must be my California upbringing.

Can you talk about the formal elements of what has become a heteroclite collection assembled by you over these past five years?

They are essentially home movies, and home movies are a known site of early female filmmaking, but these films are ontologically different in that they are outside the domestic sphere. In fact, travel can be seen as the opposite of domesticity, and these amateur films might happen to include the crowning of a Bahraini Sheikh, footage of bubbling lava; they might inadvertently document a now-vanished landscape. Additionally, many of the filmmakers did not have traditional families: one was widowed young, one was likely a lesbian, and so on. So while they are in the format of a home movie, they present the world in lieu of the home, or as a corollary space of self-definition.

It is also—as tends to happen when you drill down into a niche—a surprisingly varied collection of makers: a Jewish merchant from the Lower East Side looking for jewelry to sell in her antique shop, a British mother living in India and hoping to advertise her daughters for marriage through her film portraits, a Black couple traveling around the country by rail during segregation. All the films were originally silent, but many feature intertitles, homemade maps, shots of tour brochures, and other kinds of travel ephemera, which provide a form of loose narration. A few of these makers were active in amateur cinema clubs, and at least one gave public screenings in the town where she lived, accompanied by live narration—something I am paying tribute to in the live version of the piece. 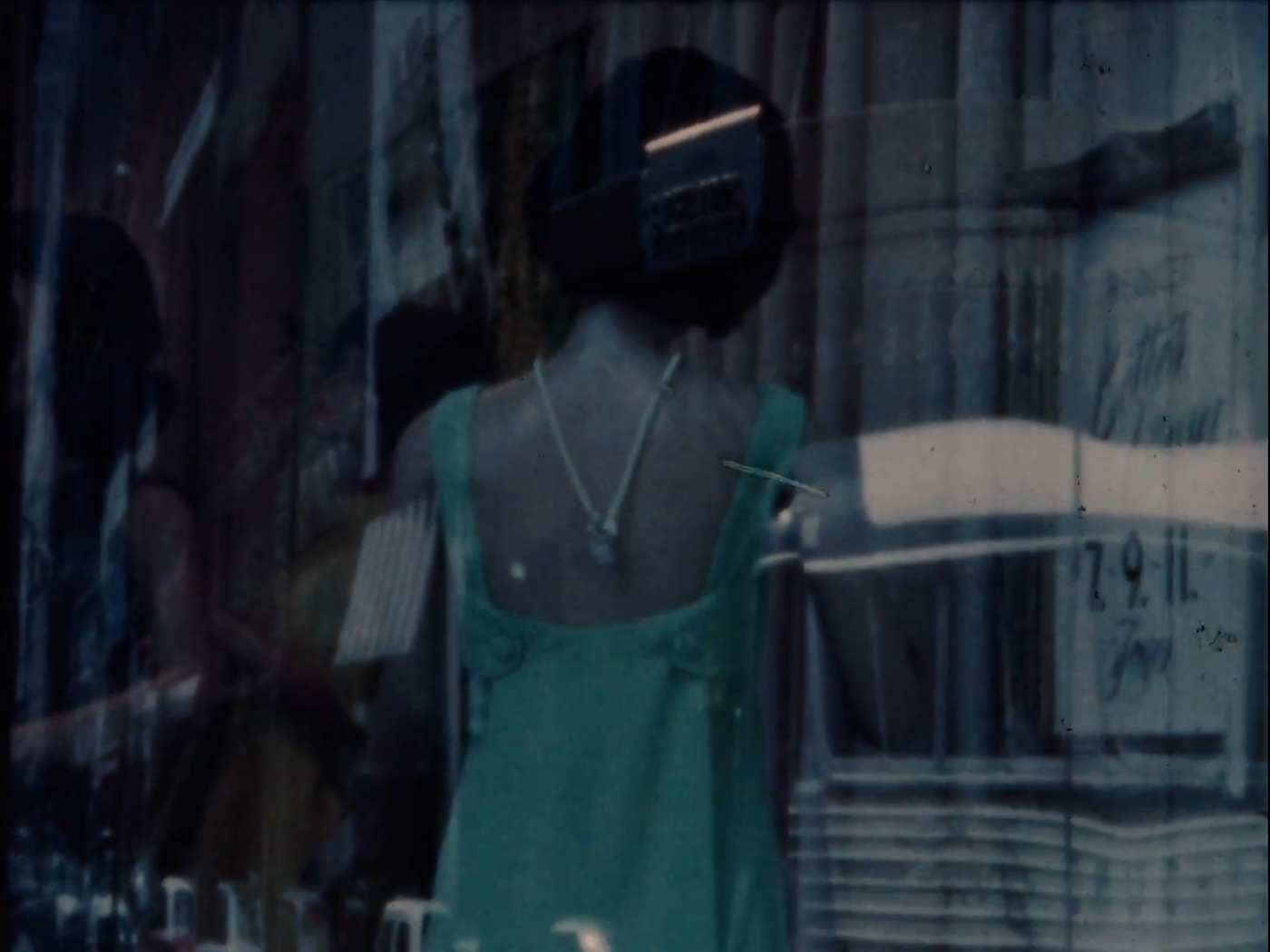 MWBDid these women see themselves as aspiring filmmakers?

CSIt’s safe to assume that most of these films weren’t intended for public view, and fit more into the tradition of the scrapbook. Though they certainly cross into the territory of accidental ethnography, with huge historic tides running casually in the background of the frame. Sometimes you have very beautiful shots which, in the very next frame, reveal the depravity of the tourism apparatus, the exploitation and artifice around it. To me the films speak to something very current as people reckon with the complexity of their own inheritance.

MWBThat’s what makes these personal films so equivocal and complex: the private and the public intersect in direct, confrontational ways.

MWBYou seem to welcome this lack of an authoritative voice in the films by being very transparent about your own learning process, by dwelling between forms and genre distinctions. The finished film is factual but also personal; a collage, but one that is sometimes speculative. It feels like an attempt to occupy the gaps between the materials and their meanings. There is room for doubt.

CSIt’s inconclusive as a stance. Trying to do an authoritative reading of them would have been throwing away the spirit of them, which is an amateur spirit, with everything that amateurism suggests. These women would have likely called themselves “hobbyists”—a category that doesn’t really exist anymore, because as a culture we’ve become so “prosumerized.” But it’s a mode without the anxiety of professionalism.

MWBI think at the heart of the project is a delicate activity: wanting to honor the work, labor, and contribution of women while also recognizing the invisible and almost reticent forms of their contribution as a historical fact. Still, you’re spending all this time digging in archives and pulling all these threads of meaning out, which of course reflects your engagement with feminism and feminist historiography.

CSI am doing excavation, but not with the intention of raising their individual names and legacies exactly, like “these are the real auteurs.” The film is ultimately a container for the materials to remain as they are—beautiful traces of innominate lives—even divorced in some cases from the names of their makers. What is being offered is time with their eyes. History is full of anonymous contributions, especially by women to the visual world, and these films also speak to that. We can call them trailblazers in a minor form, but, perhaps more evocatively, they suggest all the other individuals who lived and saw and experienced and had a lovely aesthetic and whose films did not survive, whose films were never made, who lived before the technology, who never had the means. So maybe it’s actually an attempt to decenter the idea of the artist. The center lies in anyone. 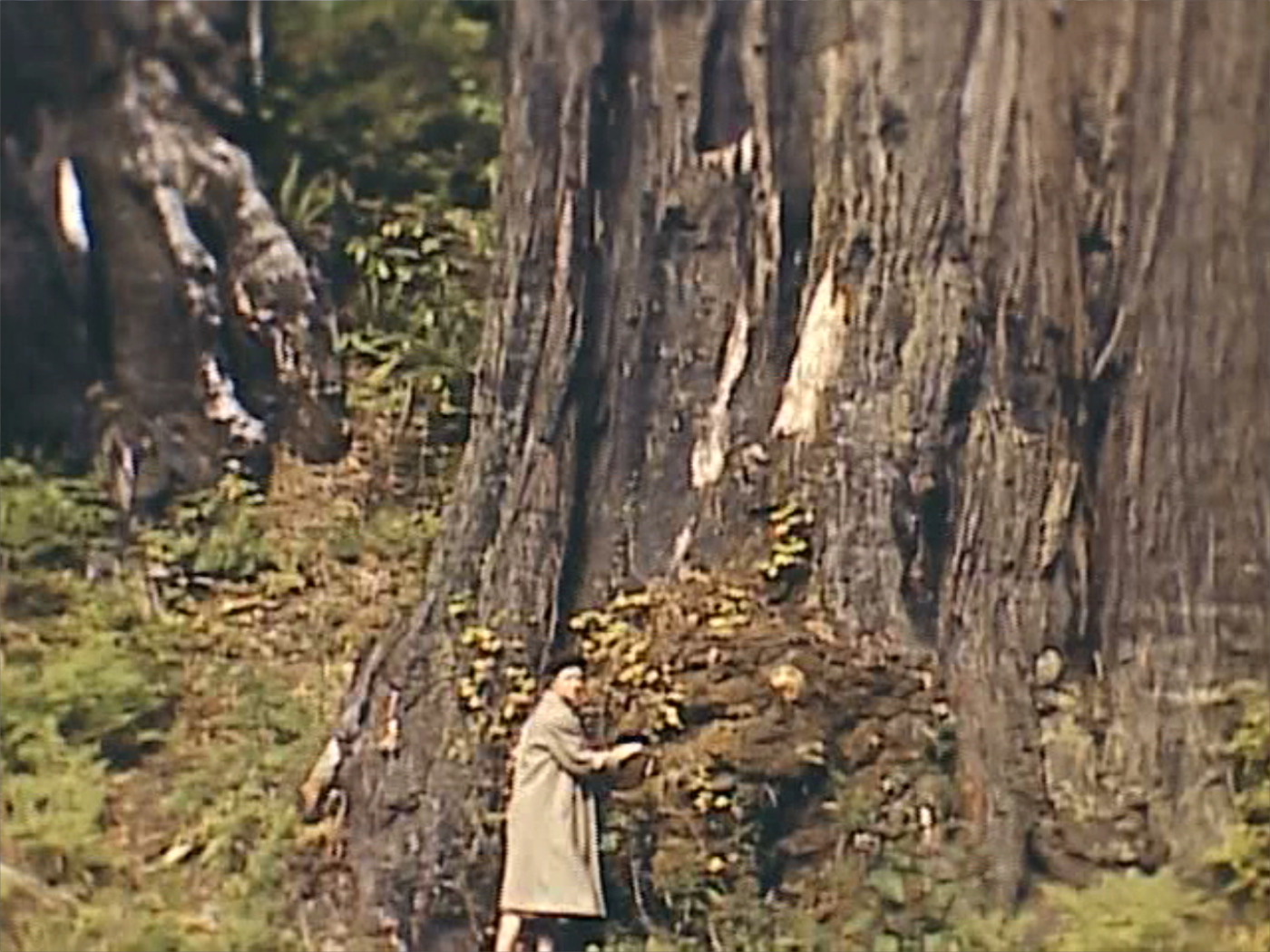 MWBThis feels like a way of opening up how we read archives, or value them—as part of something continuous rather than simply historical.

CSYes, well it’s a question of what to do with the absences in the historic record. One remedy has been the act of “retrieving” women whose lives and contributions have been erased, and to reassert their stories. Another one is to lift the dignity of anonymity.

MWBAt the end of the film you quote the Ursula Le Guin’s short story “She Unnames Them.” Can you talk about the powerful way the films assert perspective in a mode outside of language?

CSThe Le Guin story is short and beautiful. In it, Eve goes around Eden and unnames the animals. In only four pages or so, it takes on everything from the Judeo-Christian view of nature and gender, to the legacy of the Enlightenment. There was a belief among feminists of this earlier time that amending language was critical to changing consciousness. You could invent new languages or ways of using the language, and this would in turn create new structures of thought and value. I remember a professor in college, a wonderful French feminist who repeatedly circled the word “seminal” in my papers, and in the margin suggested “germinal?” In the story, Eve liberates the animals from the inheritance of names and classification systems, from the baggage of civilization.

MWBThe way feminists were messing with language feels so relevant today. It is a crucial tool to undoing traditional systems of representation.

CSYes, though they say images are rapidly supplanting language. How to rephrase time? How to unname the image?

Courtney Stephens’s Terra Femme and Perfect Fifths will premiere at The Museum of Modern Art’s Doc Fortnight, where it will be screening March 29–April 3, 2021. This screening is free to the general public. Please email terrafemmefilm@gmail.com for complimentary tickets.

Mathilde Walker-Billaud is a curator and cultural producer based in New York City. Recently, she organized the exhibition The World Is Gone, I Must Carry You at Bonniers Konsthall in Stockholm, Sweden.