Influenced heavily by the figure, her background in architecture, the suburban swamplands of Lafayette, LA, and most recently, the dilapidated houses of Queens, NY, Lauren Bordes’ paintings present an alternate reality rooted firmly in our own. 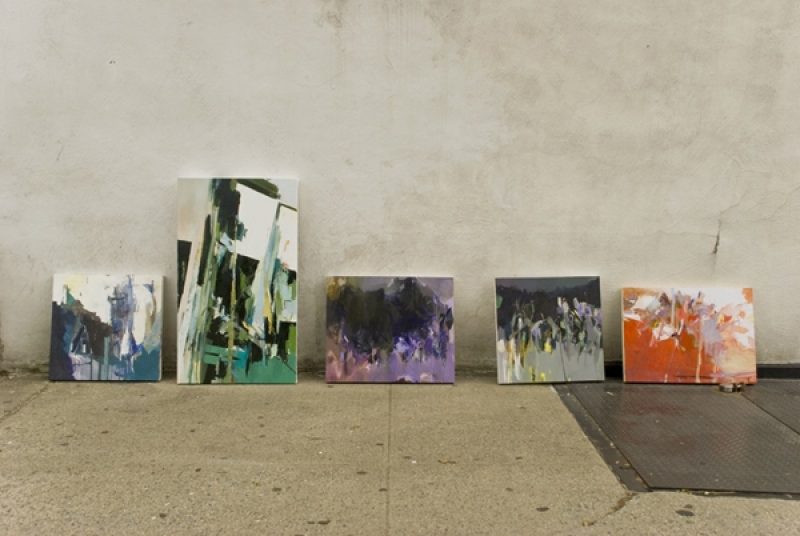 Lauren Bordes’ granulated dystopias emanate from escapist ideals. Her earlier work fluctuates between the figure and abstraction, engaging hallucinogenic daydreams of organic flux. Reality’s tangents are pregnant with conciliatory intentions, providing reassurance in her altered universe of semi-recognizable forms. Her works are imaginary and welcoming, coaxing viewers into residence within her sensationalist biosphere.

Lynn Maliszewski What has been your most recent inspiration?

Lauren Bordes Recently I was taking photos of abandoned houses in Flushing [Queens, NY]. I really sink into all these forms taking over. It was mostly to explore how painting can exist. I’ve always been between realism and abstraction. I’ll purposely make something flat right in front of something that’s kind of more realistic, for instance. I don’t always know why I do that but it is kind of a push and pull between the two.

LM Did anything in particular influence this juxtaposition?

LB I grew up in a sort of suburban city, Lafayette, LA. There’s a college there, and on the college is a swamp. It has really strange landscape, it’s suburban but a lot more rural than other places on the east coast. There are a lot of small towns that make up a big parish and its all swampland around you. The landscape was influential, I didn’t realize it until I left and all of my work tended to be sort of nostalgic and fantastical. My mom is also a portrait artist. Her work is hyperrealistic but stylized. She does portraits of a lot of random people in the area. They’re really technically well done. Throughout childhood I would watch her, and I think that’s probably why I stick to the figure. I always go back to it.

LM You’ve traveled all around the world in your brief career. Which exodus was most inspirational?

LB I went to Washington University and got my BFA in painting there. I applied for this residency that they give to one graduating senior of the art school. It’s a Paris studio right on the Seine facing Notre Dame. It’s called the Cité Internationale des Arts. At the time I was looking at the work of Henri Rousseau as a type of juxtaposition to mine. His stuff is a lot of urban landscapes. He was painting 100 years ago in Paris, he had never seen a jungle and all these things where nature’s kind of foreign to you. He would go to all the ecological gardens and hot houses all over the city and study those forms and then apply them.

LM Your work with the figure is a mainstay but sporadic, serving as a compliment to the abstraction of your landscapes. Are you figures sinking or swimming?

LB I guess I use the figure as the centerpiece of some other world. The key there is the other, exploring a more surreal environment. It’s always about creating an alternate environment to the one that we know and somehow introducing it as one we know. I’ts kind of like how we have realistic memories but we also fictionalize them. There’s always that blur between fiction and reality.

LM How did you get involved with architecture? How has that influenced your practice?

LB I took a day job in an architecture firm in graphic design and marketing. I ended up being really interested in architecture and they moved me to the studio to work with the other architects. I was there for a while then had to go to school, I’m actually starting this year. It sort of got me back to thinking about the basics of painting. Trying not to be conceptual and trying to think about light, form, space…all the things that an architect professes, these really basic things. It’s gotten me to minimize my color use. The idea of the most basic shelter has always been interesting to me.

LM Are you engaged by any other media?

LB I draw as part of my process. I’m always drawing and painting, I don’t think there’s a specific order. I don’t necessarily do drawing studies for a painting, but just the act of drawing for me is very much about basic depiction, memory. Loose doodling is really important to me and these paintings. I always have a little notebook and am drawing.

I’ve been learning more about photography because it’s a big component of my process. I always use images that aren’t found but created by me. It’s sort of theatrical in that I’m directing and composing it.

LM Who or what inspires you?

LB I always look at De Kooning, Jenny Seville, Cecily Brown, for how they paint but also the content. I think in general that shift into architecture has definitely added some restraint but at the same time there’s a boldness. There is strength in the limitations of depicting things. I’ve also been painting a lot more with a palate knife recently, the brushstrokes are way more forceful and varied. When I’m living in a place that’s really dense with lots of people and not much green space, it makes you want that. Every New Yorker is itching to get out of the city. That’s a big part of what I’m doing, I want to give people another version of their environment that’s not too cheesy. I don’t necessarily want to fix anything but rather preserve what’s good and change what isn’t a positive element.

Lauren Bordes can appreciate the surreality of nature’s whisper within a metropolis. To remedy her frustration with the lack of wildlife in New York City, Bordes fixates on the mental and physical bounty of nature. Collide-oscopic (2009) is a Camelot of a scene: homes are submerged in the uprising of nature’s embrace while the viewer recoils beneath a brilliant landscape of moss-green hills and fuschia florets. The megalopolis exhales the buds of spring within the organic sanctuary, devoid of walking civilization. Sumaya and the Alligator (2007) positions the viewer at a slightly more aerial post, glancing upon a fantastical violet alligator stalking through the brush. Obscure shapes and loose shrubbery relay the energy of the flowerbed rather than replicated fauna. Bordes announces the glory of nature, of the intermingling between man and Mother Earth. Her earlier work encourages viewers to attach to the resounding rapture of nature.

Experienced in architecture, Bordes understands the value of positive adjustments to the skyline and their range of effects on the nature’s sphere. Her drawings reflect the specificity of her passions and serve as spatial experiments. The House that Sits Alone (2007) presents a figure study of two buildings rendered in a pink blush with teal, black, brown, and forest-green accents. Variation in line implicates assorted weights of the chimney, windows, and doors. Diluted hues grace the interior of the primary building in atypical blobs, extracting the last bit of realism. The empty background of the white paper presents the home as a symbol, an elastic doppelganger of the real inspiration. It is confident and eccentric outside the confines of its neighborhood. Maine Dandelions (2007) empowers Bordes’ imaginative strength to manifest immersive worlds out of hardly any imagery. She challenges her audience to connect the dots she provides. The flowers are graceful and strong, providing a perch for a butterfly. The negative space places viewers alongside the flowers in the dirt, uncertain whether nuclear power plants or a dandelion field would have expanded beyond the plane. Bordes’ drawings elucidate the weight and poise of nature and invite viewers to partake in the grandeur of its environs. She is transfixed upon the natural world and its singularity within urban regurgitation.

Her newest slew of work expands upon her architectural inspiration, negating the domination of her more literal depictions. Based largely upon dilapidated brownstones in Flushing, Queens, the new series focuses on culling aesthetic forms from mayhem. She has taken up a palate knife and stark gestural line in exchange for her preceding sensual forms. Her process is “about having control and then losing it, and then gaining control again.” Broken Mansion on Flushing Drive (2010) has a particular gloom not found in her earlier work, with striations of pigment and harsh angles. Her palate is unrecognizable from her earlier work, leaning toward darker demons rather than evocative sunshine. Tautly secured within her thematic subject, her loops and lightheartedness have morphed into subterranean, austere scrapes. Murmurs of nature’s sentiment have crossed over to the dark side.

Bordes places emphasis not on shape but on layering of color, creating heavier and often indecipherable forms. Imagined Norwegian Forest (2010), for instance, presents an ominous eggplant wilderness at dusk. Various hues of violet invade the foreground and accentuate the frightening, bleak wasteland. The colors are defiant, the gesture outright. Nature triumphs as an imposing and unforgiving warlock rather than inviting pacifier. The harmony of nature is lost, no longer presenting the playful twirl of the breeze. Her technique imposes a breakdown in visual communication, looking to lead the viewer astray into the hollowness of nature, into its parasitic qualities and eventual domination over civilization. Bordes’ images threaten to engulf viewers in the fold of the ever-powerful and overbearing clutches of nature.