Building a possible portrait of Chelsea Manning from DNA. 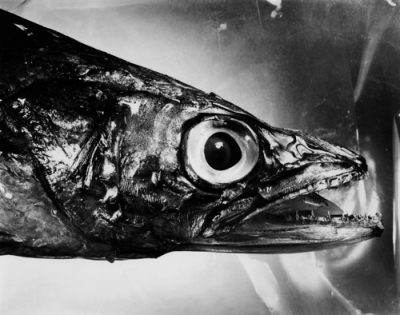 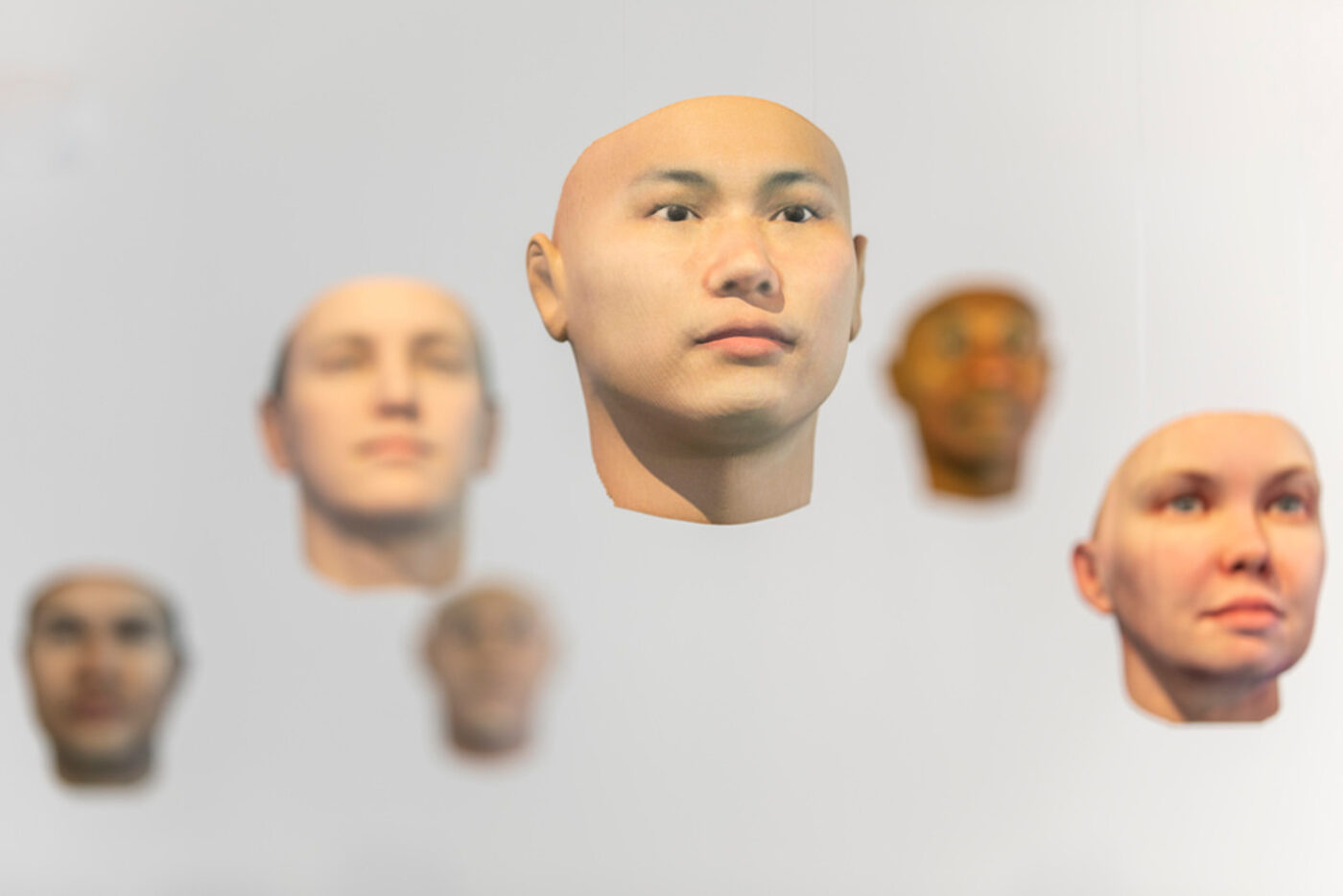 Six years ago, you were as likely to find Heather Dewey-Hagborg collecting discarded cigarette butts and chewing gum as you were to find her in a lab sequencing DNA. These two activities were the foundation of her Stranger Visions series, for which she made 3D-printed portraits based on the DNA she extracted from anonymous strangers’ trash. Fast forward to 2014, when Paper Magazine was planning an interview with then-incarcerated Chelsea Manning. The problem was that no images existed of Chelsea Manning, who transitioned from male to female while in prison; there were only pictures of Bradley Manning. Because Chelsea was under strict regulations that prohibited her from having her picture taken or released, Paper invited Heather to produce a DNA-based portrait of Chelsea. Chelsea’s only worry was that her portrait would look too “male,” so they decided to make two portraits, one parameterized to be “female” and another parameterized to be gender neutral. Heather and Chelsea expanded the resulting portraits to include thirty different variations of how Chelsea’s DNA could manifest, each entirely unique and equally possible. The group of portraits was the focal point of their exhibition A Becoming Resemblance at Fridman Gallery in October 2017. Heather and I recently spoke on the phone about the work and its broader cultural implications.

Amelia Rina I thought your decision to suspend the faces in A Becoming Resemblance was so effective—they would sort of quiver as people moved around the room, which gave them a startling sense of life. Then, being able to see the inverted faces from behind, which made them look like masks, emphasized the idea of identity as performance.

Heather Dewey-Hagborg Yes, I was surprised by how much came of that experiment. I love the connection that you make with performance. Some people came into the gallery and actually performed with the portraits, finding their favorite face among the crowd to take a selfie with. People were, in a sense, taking a picture of themselves wearing this other identity, this permutation of Chelsea, which is something that could never happen if the faces were on the wall.

AR Sometimes the hanging faces would match up almost perfectly with people walking around them. There was a sense of somebody walking through these identities, and sort of slipping them on and off.

HDH I think it does point to this fluidity: you can walk through the crowd and through different identities. I was really pleased with that unexpected discovery. The movement that you mentioned also was so nice—the way they could breathe and almost appear to be even more lifelike. 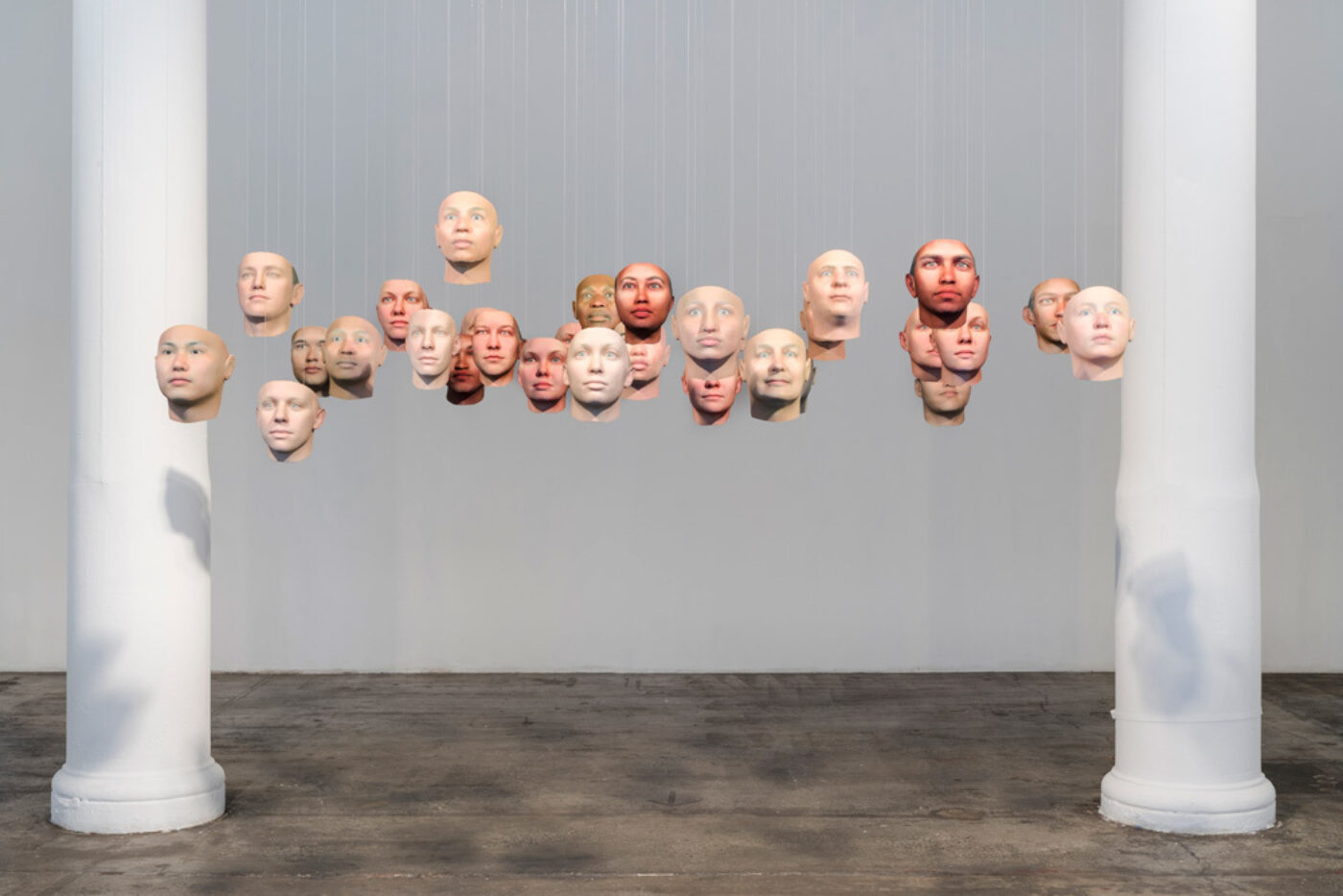 AR I think an interesting difference between A Becoming Resemblance and Stranger Visions is your different treatment of privacy and visibility, and the different ways they can manifest as either a voyeuristic intrusion or a radical visualizing of a person who can’t be seen. With Stranger Visions you made portraits without the DNA owner’s explicit consent. With Chelsea, you were able to give a face to a person who was forcibly being made invisible. There’s a beautiful relationship between those two conditions, and the different situations in which our biological identities can be simultaneously something that we want to protect and something exploited by other people.

HDH Definitely. The work really sums up all of the contradictions and conflicts I encountered going through this whole body of work. I didn’t really realize it until after I had been working with Chelsea’s DNA, but it had become this incredibly intimate process. There was this transition from working with sets of anonymous strangers I would never know: working with them en masse, really as specimens. Then, suddenly, I was working with just this one person’s DNA, and it was this real person I knew of but had never met or spoken with by the time I received her cheek swabs and hair clippings. I really got to know her first through this act of profiling—through extracting her DNA, sequencing it, sifting through it, and interpreting it.

AR You could say that DNA is the most intimate thing you could know about a person. It’s our essence, in a way. It’s what makes us who we are, but it also makes up all possibilities of who we could be.

HDH Exactly. It’s this kind of algorithm for making a version of a person. Also, most people don’t have access to genetic information about themselves. So when you profile another person, you potentially know these aspects of them that they don’t even know about themselves.

AR Like you could find out that somebody has a genetic predisposition for some sort of disease.

HDH That’s something that I’ve mostly kept out of the work that I’ve done with the portraits. It appears a little bit in the new project I’m working on, but with the portraits I really drew a line and decided that I wouldn’t analyze that aspect of strangers’ or Chelsea’s DNA.

AR Why is that?

HDH I saw it as an ethical boundary. Obviously, Stranger Visions was meant to be provocative, and it was meant to get people to think about these vulnerabilities for surveillance, so it’s not as though I was trying to portray myself as a nice person or something. I’m clearly putting myself on the line already. But for myself I felt that that was an element I didn’t want to examine or make public. 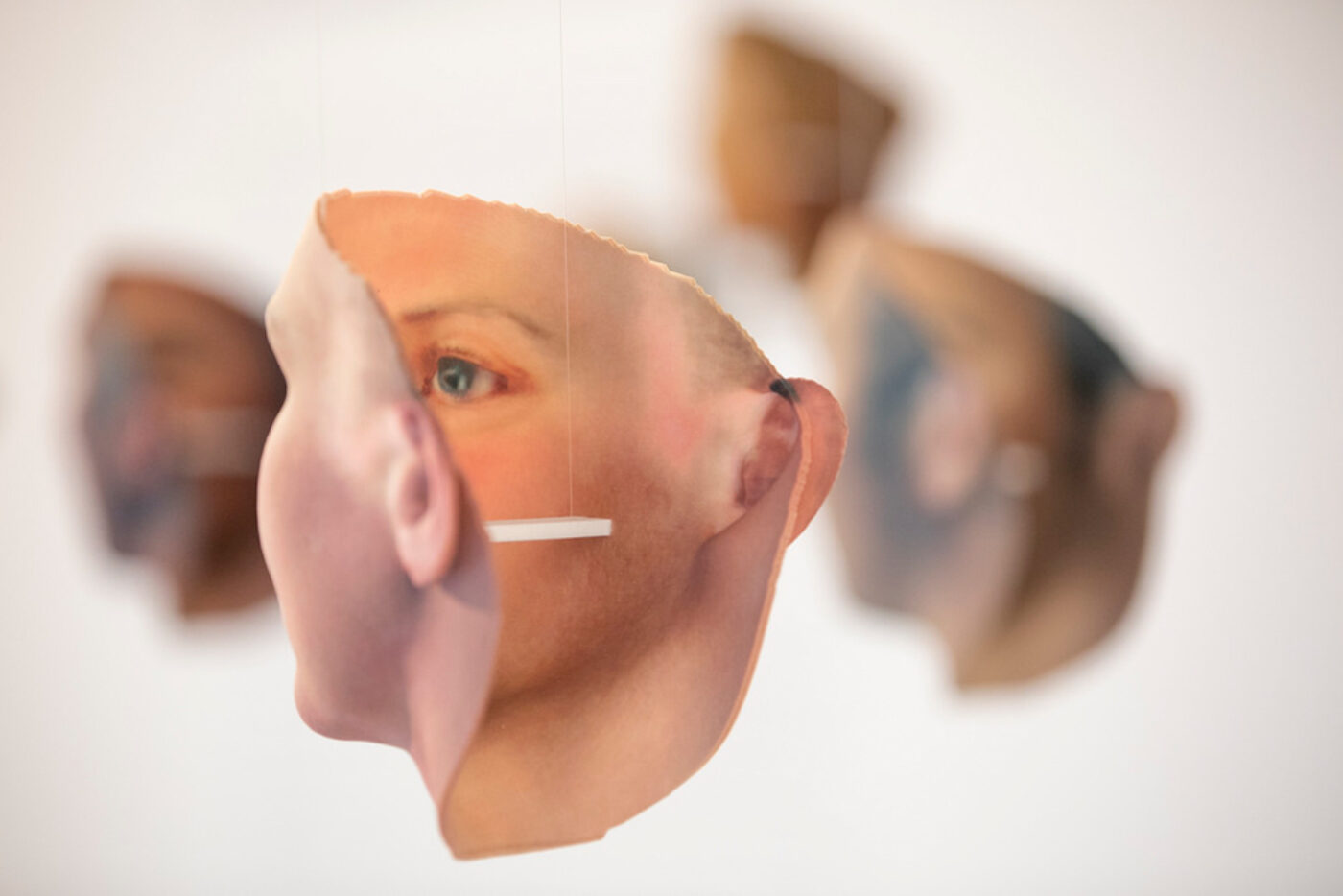 AR Especially in a time when the health-insurance industry can exploit people through the data we put out into the world, whether it’s biological or digital, and use it to discriminate against groups and individuals.

HDH That really is the ubiquitous genomic, ubiquitous data future that we’re walking into. In a sense we’re already grappling with this abundance of data about ourselves that we have so little control over and that follows us everywhere. If you start thinking about what it means to put that together with blockchain technology and the management systems where you have some form of immutable identity that you can never change, it becomes really concerning. That’s another thing I’m beginning to research and think about—the biopolitics of blockchain.

AR It just goes to show how little we understand and how much we underestimate new technologies. When I read about gene editing, for example, it’s almost all the same promises of medical advances and eliminating disease-carrying genes from embryos, and positive spins to prep us to accept the terrifying future of designer babies. I worry that people haven’t taken the time to think about the potential risks to this technology that corporations are dumping money into.

HDH I think that’s true. Because the critical conversation has this tired form that we’ve heard a million times and that doesn’t really impact anyone. I mean, thinking about designer babies and this kind of neo-eugenics program, there are very real risks, but it’s hard to move the public by invoking these mantras over and over again. There is a need to think deeper, do more imaginative experiments, and discuss new topics. There is also a need to show what these risks are, with art, for example. But it has to be in a way that doesn’t feel cliché. It has to feel like it’s showing us something that we haven’t already been thinking about.

HDH When thinking of new ways of showing things that we’ve already thought about and dismissed, the most important thing is to make people feel them. Because it’s one thing to listen to someone say something and dismiss it; it’s another thing if you really feel implicated in it, or if you see yourself in a work of art. 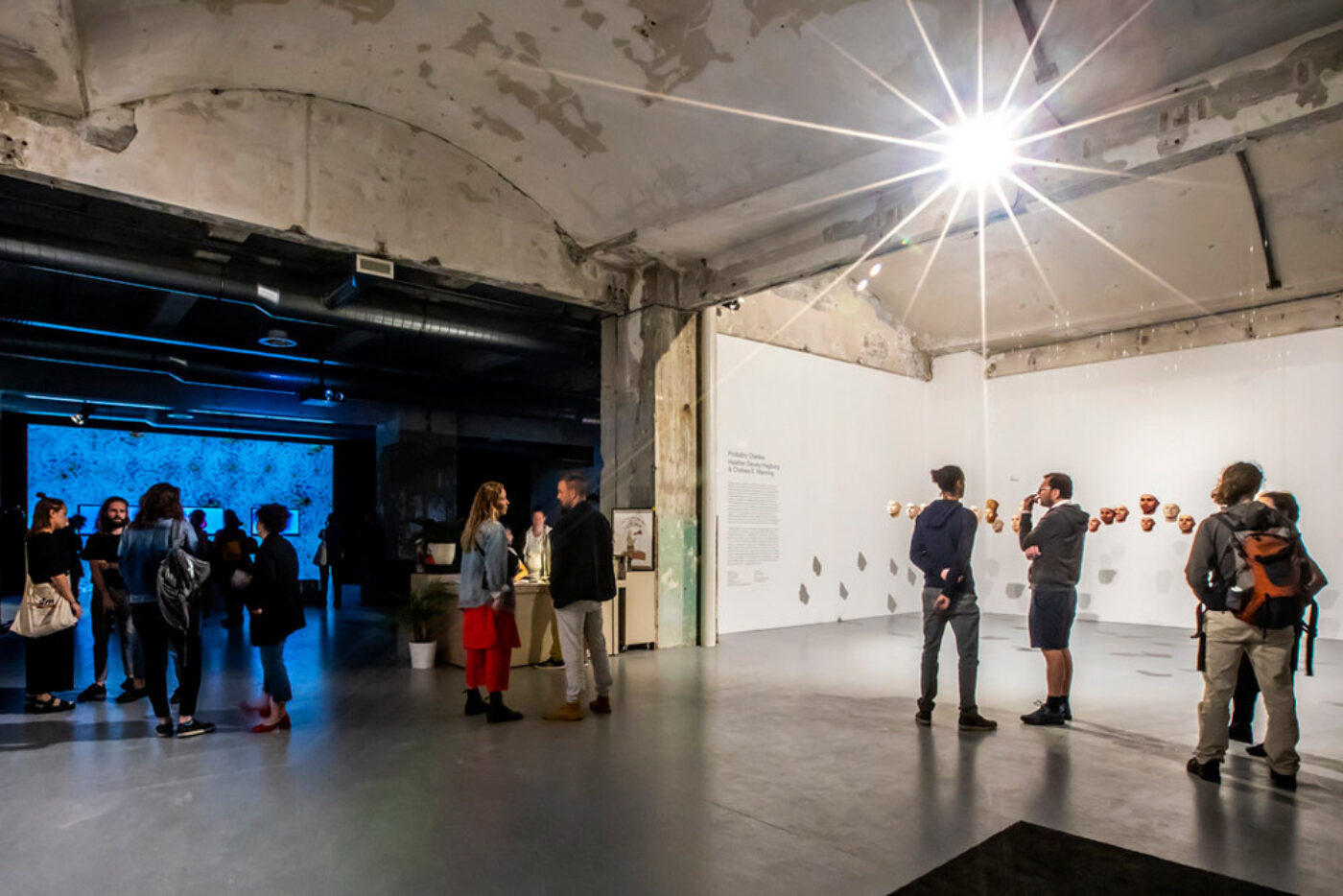 AR I think that’s what’s so effective about your work and about this project: it makes real and makes physical the possible outcome and implications of this type of technology in a way that people can see and relate to. I think that we need more work that creates a visceral response in people’s understanding of how data is being used.

HDH The other thing that comes to mind is the question: What kind of world do we want to live in? We will be shaping that world with our tools, our technologies, and our science. We’ll be constructing these different ways of forming, expressing, and allowing for change and continuity, or pushing against it and making it into the immutable inscribed categories. I think we’re at pivotal moment right now. We need people to think in a complex and radical way about how identity is involved in the creation of tools and in the scientific research around them.

Heather Dewey-Hagborg’s portraits of Chelsea Manning are on view in the solo exhibition Genomic Intimacy at MU artspace in Eindhoven until July 8, and in the Future Starts Here group exhibition at the Victoria and Albert Museum in London until November 4.