From a styrofoam egg carton to scenes inhabited by ancestors, Aaron Gilbert’s work brims with a continuity in life force that eerily bridges traditions of painting and spirituality to the present. He discusses the philosophy and politics of his work with Mary Jones. 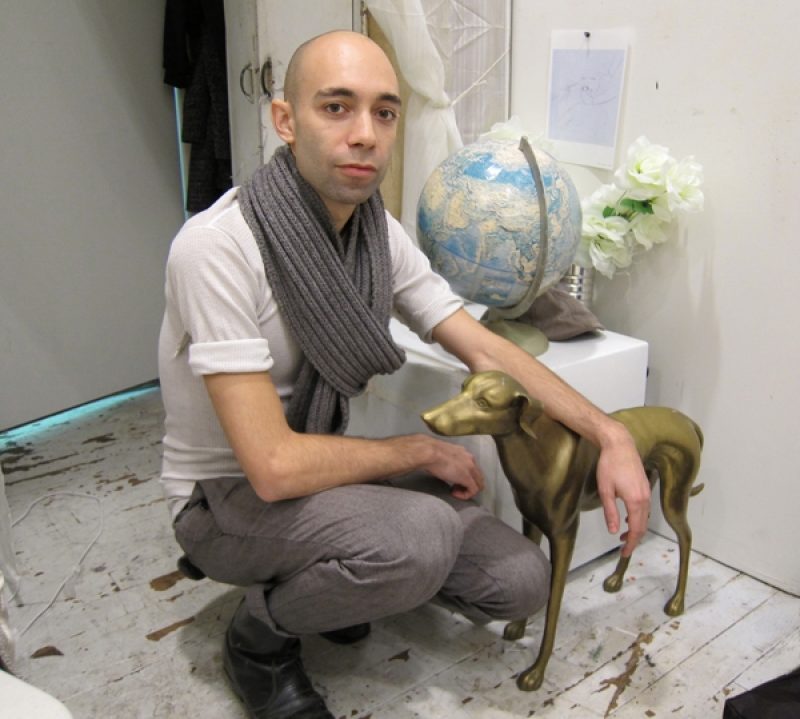 Aaron Gilbert makes paintings that eerily suggest the space between being and nonbeing, something like a dream of hovering over our own bodies. His work is deeply personal, often unsettling and unsentimental in its Gothic approach to humanity, but this dark take is also imbued with luminous beauty and a painterly tribute to centuries of accumulated vision and purpose. Aaron graduated RISD in 2005 and Yale in 2008. He’s recently been included in the collection of the Brooklyn Museum, and in 2010 was awarded the Rosenthal Family Foundation Award in Painting and the American Academy of Arts and Letters Art Purchase Program. I interviewed Aaron in his Brooklyn studio.

Mary Jones An intriguing part of your work references a mysterious relationship to consciousness.

Aaron Gilbert I look at early Renaissance and other forms of devotional paintings, like Mexican Retablos and Byzantine Icons, even the way I lay out narratives comes from Miniature paintings. But your question is partly about my approach to my craft.

First, I really believe more than anything else, it’s an object that I’m making, and its final merit is about how much transformation happens with the materials. I feel at odds with American culture at large. The entire architecture of our society is based on veneer: vinyl siding and Walmart. Things are made just good enough to be just pleasing enough on the shelf to sell, past that there’s no craft. I think that carries over into the mentality of the way a lot of artwork is made. For me, it’s a result of the Enlightenment and from the Renaissance that there’s no belief in the transformation of objects. Puritanism finds it’s way into our practice: You shouldn’t be too fancy, we should be suspicious of anything that’s too fancy or seductive. The minute we’re seduced by it, it’s no longer an intellectual pursuit.

MJ But do you think your work posits the possibility of transformation?

AG When I’m making a painting, I’m thinking mostly about tuning the frequency of the composition and color, but it’s in the belief that a transformation can occur. In a way, painting is a way of freezing a certain frequency. You can orchestrate something that’s emitting a frequency that effects whoever views it. That’s a mechanical way of explaining the ambition of the work. I think everything we make has the residual energy of our ambitions and intentions in making it. So when you buy something off the shelf, you feel its effect. I think the same is true for the art we make. 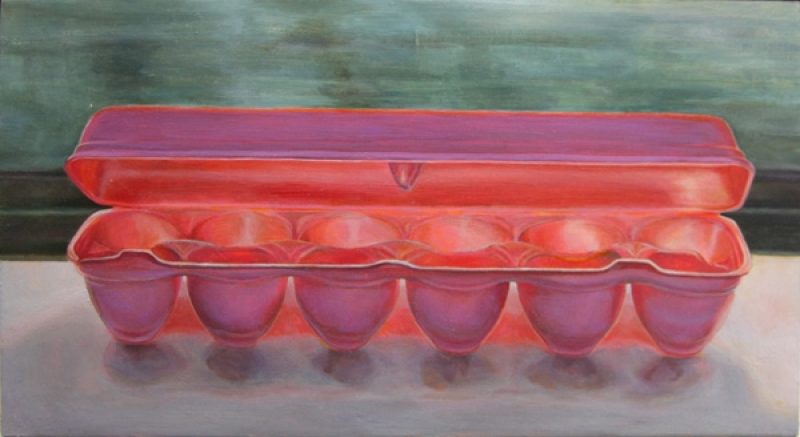 MJ Can you talk about the painting of the egg carton?

AG There’s something so synthetic about them. It’s the in-between space where the chicken’s life force is held in suspension, like a synthetic womb. It’s also a commercial product showing all the agendas for the society; it removes all the organic messiness from the pedestrian’s life. On a serious side of things, when you think of ourselves as part of the earth, we are all animals. I always carry around this notion of the boundaries between ourselves and animals.

MJ Your work is very emotional and first hand, you don’t observe a critical, postmodernist distance.

AG You’re kind of asking how I validate what I’m doing. I validate it on a human level. I think I’m more interested in people than in art, and I’ve always wanted to clearly communicate with the people who formed who I am. I want first and foremost the message to be conveyed, and then after that any aesthetic goals are secondary. If the work fails in any level it’s not going to fail in what I want it to be about.

MJ Political work has to continually evolve. If work looks like it’s using political content to find form, the politics can seem disingenuous, the forms and images for political work have to keep changing.

AG In a lot of ways the rules have really changed. People are recognizing on a large level that the illusion of us existing in the empire is irrelevant. There’s a feeling of impotence. We recognize the life span of the empire in a way that we didn’t before. I think what it comes down to, and one of the major shifts in art right now, is that people are realizing that there’s too much at stake at the moment, and that work has to address or account for that in some way. For work to do that it doesn’t have to be heavy-handed or didactic, but the realities that people have to live through have to be embedded in the work. We have the same needs that we’ve always had, there’s an emotional element to that that’s pretty profound. When I need art the most, it’s when I’m completely alone in a situation that’s hard to navigate. I think that if our work is entirety intellectual, then it’s limited in its usefulness. I believe that’s only one aspect of who we are.

MJ You use your family very literally in your images.

AG If the work doesn’t reflect my experience, it can’t be coming from the right place. I can speak about my life with the most specificity and the most nuance and I think that’s how we live experience. We’re all very complex; my family and myself, and it’s the most immediate way for me to access some of those different levels and have them be in the painting simultaneously. I think the nuance and poetry of the images can exist in the subtle secondary actions, in a lot of ways that’s where the actual story plays out.

MJ I think of Kafka when looking at your work. You seem to address the uncanny. Are there specific influences?

AG I try to have brutality and tenderness exist simultaneously. I think if there’s a complete absence of either then it’s untrue. 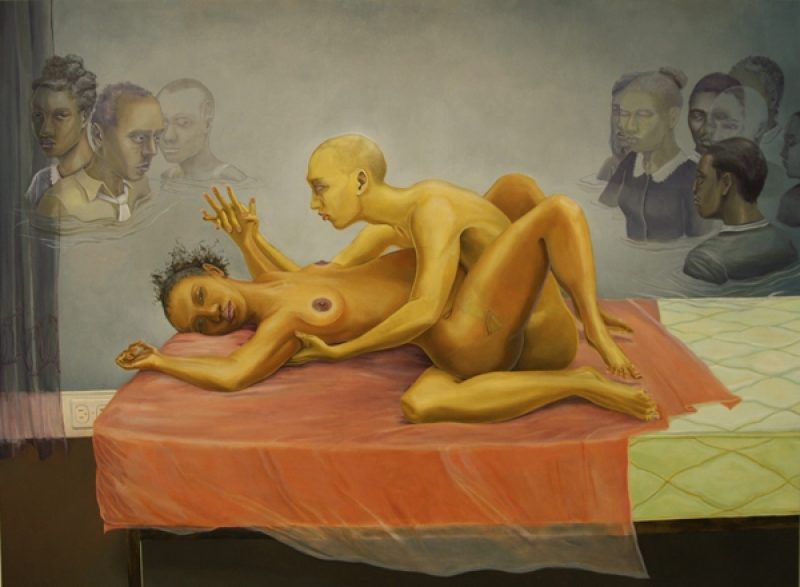 MJ The feeling is that the figures are not quite inhabiting their bodies. They could be embryonic, or maybe dead, the past and future hovers above them. Can you talk about your painting The Ancestors?

AG I think of it as a pollination painting. A man and a woman have intercourse, but present in the room are the ancestral lines of both, and our tendencies. My tendency is to think that sex and who I choose to pass my seed on with have to do with my own agendas and inclinations, but I was thinking that on a cosmic scale, the people who have the most interest in this are our deceased ancestors, because we’re the possibility for their line to be passed on on this planet. There was a while when I thought our children were who matched us up, that they’re the ones who steer us, and that’s how they bring themselves into existence. The Ancestors presents a more likely, or more potent myth. It’s also about dissolving the self. A society that holds the concept of individuality and self as unique is an anomaly of history. A lot of societies have tied that understanding into a continuum, that we’re part of a continuum, instead of an isolated entity. In a way this is taking away the free will and individuality and insisting on a cosmological narrative.

MJ And the drawing of the Father and Son?

AG That’s a patricide image. The father image is a combination of my father and myself, and the child is a combination of my son and myself. Metaphorical for the idea that in order to be balanced or healthy we have to surgically remove a default part of our parents, which is a painful and difficult thing to do, but it’s a reality. I also started thinking of it in terms of a metaphor for revolution, particularly in reference to Latin America, where there’s a narrative of overthrowing a corrupt or dictatorial figure, a patriarchal figure; a parallel of larger historical narratives that continually recur in family narratives.

The knife blade in the painting is gold leaf. With a lot of Medieval annunciation paintings there’s Mary and a dove representing the Holy Spirit, and a thin line of gold that that runs from the dove into the womb of Mary, a pathway for the extraterrestrial spirit to enter the earthly body. This is an opposite, the gold of the knife blade is the pathway where the spirit of the man exits the body. It’s playing off that painting history but in reverse.

MJ The paintings ask philosophical and psychological questions. What is a man, what is a woman, a father and son? You don’t seem to have a comfortable answer.

AG I would just say I don’t have an answer. These are all profound questions. There aren’t easy answers. One of the beautiful things about figurative painting is that you’re continuing a conversation that’s been going on so long, and contributing to it. Two years ago my wife and I were in Pompeii, and looking at the erotic frescoes I was really stunned. There was something so immediate and such a vitality to the figures that they seemed completely contemporary. It’s really the same actions, and the same subject matter that occupies our minds now. Looking at those images erased any distance between me and the people who made them and the people depicted in them. That was such a beautiful moment. To have that distance erased, to be in the same conversation, painting really reduces those barriers.

Mary Jones is an artist living in NYC and an adjunct professor at RISD and SVA.