For this installment of Post Impressions, Kanishka Raja takes the scenic route from Kashmir to Switzerland in conceptualizing his latest series of paintings. 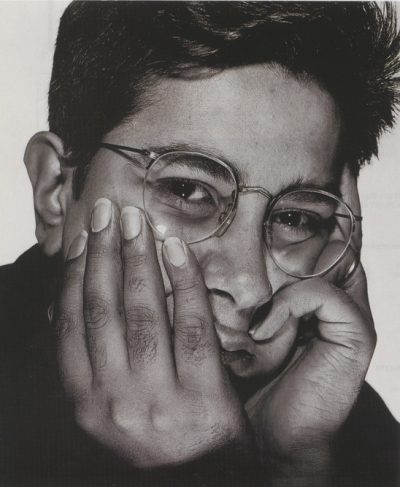 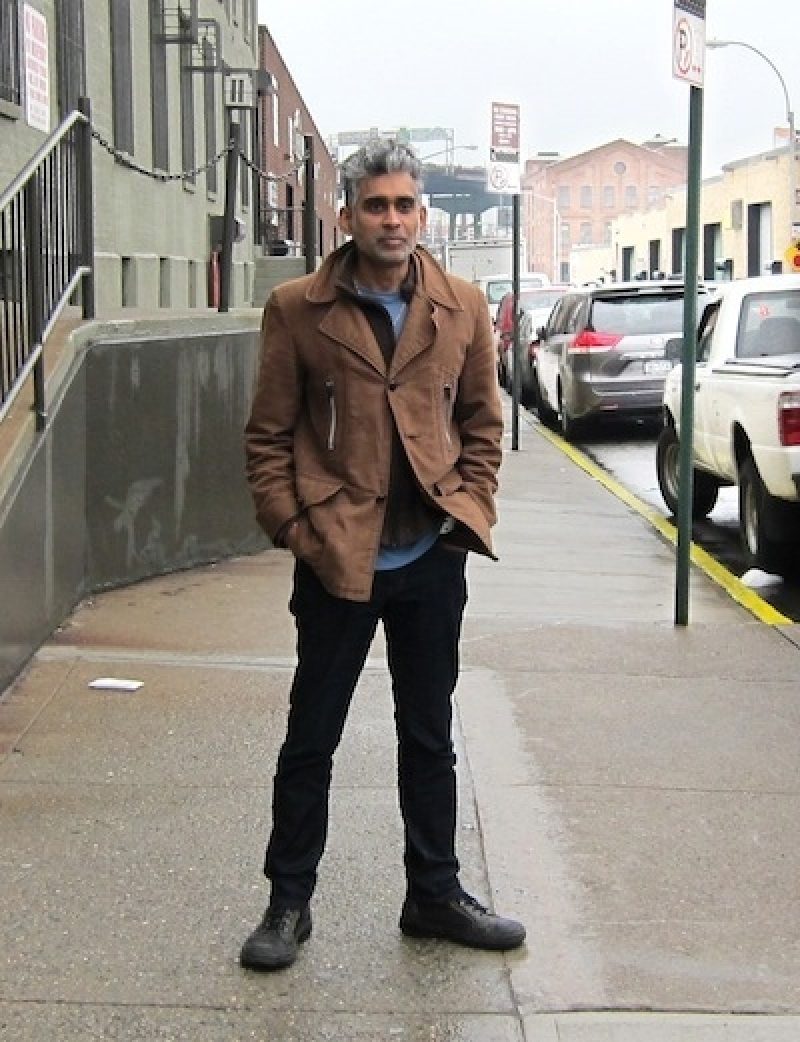 Kanishka Raja’s colorful, complex paintings collapse and compress associations of space, perspective, and time to reflect the megacity experience. Ideas of movement, migration, and pattern are all considered in the density and structure of these contemporary images. I interviewed Kanishka in December in his Brooklyn studio as he prepared for an installation representing his gallery, Greenberg Van Doren, in the upcoming Armory Art Show (March 8–11). Kanishka Raja is a recipient of a 2011 Joan Mitchell Foundation grant; the 2004 ICA Artist Prize from the Institute of Contemporary Art, Boston; and residencies at the Lower Manhattan Cultural Council Workspace Program, the International Studio and Curatorial Program and the Civitella Ranieri Center. His work is included in the collections of the Fogg Art Museum, Harvard University, Cambridge, MA and the Meadows Art Museum, Texas.

Mary Jones You grew up in Calcutta and your parents are respected textile designers. Does a philosophy of the decorative arts merge with the fine arts in your work?

Kanishka Raja Dinner table conversations in our house usually were about what colors were working together, like “Did you see that rust and olive green that was made today? That looked pretty great today.” My philosophy has been that everything is completely valid source material. Part of it comes from my father’s way of working. He designs saris, which have a whole set of traditional codes that you have to adhere to, but source material that is amazingly diverse and cross cultural. One day it would be Egyptian scrolls and the next ’60s Pop. A fluid connection between high and low-level source materials is something that I naturally absorbed. In a larger scale, the culture of India that I grew up in was driven by a Pop cultural landscape, a culture that was Postmodern long before it had a chance to be Modern.

MJ Can you describe that?

KR India is a young new country and a very old culture. The process of self definition in an urban context, which is the context I know most, involved picking and choosing from every other model that existed in the world in a very non-hierarchical way. Both the vernacular pictorial language and music, which is a big influence for me, reflect that deeply.

MJ How does your work reflect these ideas?

KR The density of an urban experience has always been important to my aesthetic. An integrated harmonious existence seems to be the model for an urban society, at least the ones that politicians talk about. But the evidence of the city is something quite the contrary, and shows that things are fighting against each other to find a way to coexist and integrate. This idea has always interested me. I think in a way a lot of what I do, especially now, takes this as a model very directly.

MJ Let’s talk more about your current installation. You work from a large collection of images collected from around the globe; often large public spaces that evoke the disembodied imaginative space of the cinema. Yet these experiences have until now been entirely unpopulated, now for the first time you’re including images of people. What’s changing?

KR I became interested in images of crowds of people staring at a light in the distance, and how it’s used symbolically to represent godlike belief and the notion of the ideal. For example, I recently saw a vernacular political poster from Iran, where it’s very common to see the Ayatollah portrayed with an emanating light. It’s an overused, cheesy idea in one context, like a Hallmark card, and in another context it means something entirely different. My project begins with an image taken from a newspaper from Kashmir and it ends with a picture from Geneva, both with crowds of people staring into a light in the distance, all these competing ideas of perfection. They will meet in the center with the image of the Hadron Collider machine. It’s searching for the God particle that will unlock all the secrets of the universe, which is another belief system. The machine itself is so extraordinary. I couldn’t resist it.

MJ What led you to research images of the ideal?

I had a show at Greenberg Van Doren, and thinking through some ideas after the show, I came to the notion that the images that I use to begin my work were just preloaded with too much content, my struggle was to rid them of content and it felt like a ridiculous act. I just wanted images that were neutral, and I thought of Switzerland.

But, as soon as you think about Switzerland it’s not neutral, it’s the opposite of neutral. Of all the nations in the world it’s as complicit as you can get, they’re the largest money laundering scheme in the history of civilization among other things.

MJ It’s interesting that you’ve gone from images from Kashmir and ended with Switzerland. What’s the connection?

KR Switzerland is an ideal in the developing world. It fulfills this imaginative space, not only is it beautiful but it’s efficient and clean, everything works, everything’s on time, and they make perfect watches! And they have for hundred of years.

Switzerland represents an important imaginative model, when you live in a condition or place where these basic things are constantly in flux, where your entire day can be reorganized because the train doesn’t actually come—forget about being on time. This was very much the India that I grew up in. It’s also true that you could go to many, many countries in the world, and while traveling in some town you could go into some dusty, crappy roadside café and there’d be a fucking poster of Switzerland! I guarantee you seven out of ten times. My intuition is getting more and more confirmed as I look into it; I found a reference to it in the book Snow by Orhan Pamuk, where in a remote town far away from the grandiosity of Istanbul, a guy walks into a café completely covered with posters of Switzerland.

MJ How has Switzerland worked its way into popular culture?

KR I started thinking about the Hindi movies I saw when I was growing up, and how often the song and dance scenes in the main event of these movies—when the hero and the heroine cut away to a fantasy sequence, where their love is proclaimed or consummated, when they leave the reality of their everyday lives and go into a symbolic landscape—are always in Switzerland. There are more Indian movies shot in Switzerland than any other foreign location, so much so that now the Swiss Tourism Board puts out a brochure aimed at attracting the Indian movie industry.

Let me backtrack for a moment. Kashmir has always been known as the Switzerland of the East, and a popular destination for the these filmmakers for the same purpose. But sometime by the mid-’80s it became politically untenable as a viable location, too dangerous because of the history of the conflict between India and Pakistan over Kashmir, the central narrative of the subcontinent’s politics, and Switzerland became the Kashmir of the West. It’s no revelation to any one steeped in Hindi movie culture.

MJ Your research is clearly becoming a much more active, accessible part of your work. You’re using it much more directly. Your journey through this material has become part of the piece itself.

KR It’s true, the rabbit hole gets deeper and deeper. On a blog about South Asian politics that I look at every day, Chapati Mystery, I followed a link to a Flickr page and discovered these little portraits that I was very drawn to. The characters were major political characters and one-percenters, painted in a lurid way reminiscent of the Bollywood movie posters and hand painted billboards that I grew up looking at. They were clearly made by someone well versed in South Asian politics with a sophisticated visual sensibility, but with the pseudonym lapata, that to me just said anonymous. At this time I was already thinking about working on a tourist brochure of my own that would accompany the paintings for the show. When I found these paintings I thought they would work beautifully with the context, so I contacted this artist. It turned out that she’s not only a Hindi scholar, and an American, but also Norman Rockwell’s granddaughter! So imagine me on the phone just saying, “What just fucking happened?”

MJ You’ve created your own brochure, Switzerland for Movie Stars as an inextricable part of the paintings. Can you talk more about it?

KR I found the original Swiss Tourism brochure Switzerland for Movie Stars online. It’s an attempt by the Swiss to attract Indian business, it’s all about how great Switzerland is, but toward the end there’s a two page section called “What To Do And What Not To Do In Switzerland,” which is clearly an etiquette guide for Indian travelers. I left this section entirely in tact. It’s full of tips like, “Prices are generally fixed in shops and bargaining is not possible” or “In Switzerland, like the British, a man’s home is his castle. This includes his well tended garden and fruit trees. Plucking of these is not welcome.” All the rest of the text I’ve replaced with blog entries by Indians traveling in Switzerland, many in Europe for the first time. I found their descriptions really fantastic. I’ve also replaced all the photos of Switzerland with similar photos of Kashmir, and I’ve added Daisy Rockwell’s paintings. It’s not illustrating the experience, it’s another component that you carry away with you, the way I’ve structured the brochure it requires some reading; it’s a funny and interesting little document. The brochure will be alongside the paintings, they must always be shown together. It’s like a tourist brochure, like something you can take away from a tourist site. It’s an independent related object, another way to explore the same ideas that are in the paintings.

MJ You told me how beautiful you found the Google directions from Kashmir to Geneva, all the languages and cultures that are included in this journey. How did you find a way to include them in your installation?

KR The trail is a linear traversal that runs from the first panel to the last. It connects the paintings to the brochure, where the entire walking directions are printed along the bottom of each page and run like a ticker throughout all the pages. It goes through Afganistan, Iran, Iraq, into Turkey, Greece, Italy, and it’ll end in Geneva. The politics of the entire world are in this line—a 57 day, 5,000 mile endeavor that begins with Turn left here.

Mary Jones is an artist in NYC and an adjunct professor at RISD and SVA. 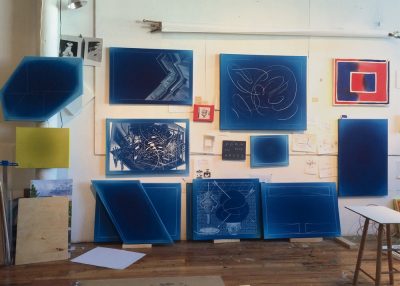 It starts, of course, with water. A bath for the newborn, a baptism for the blank canvas. 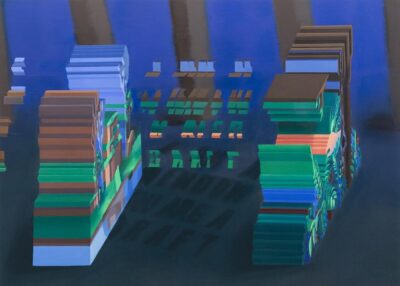