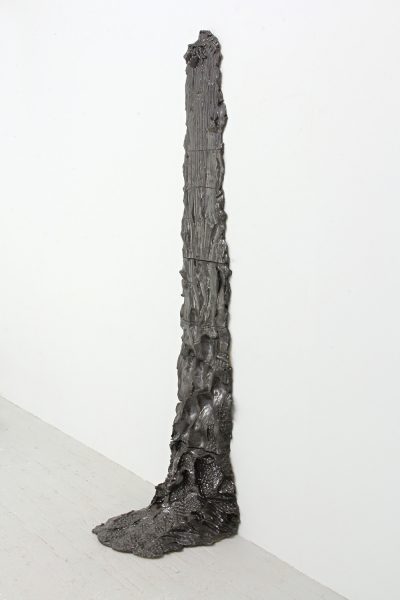 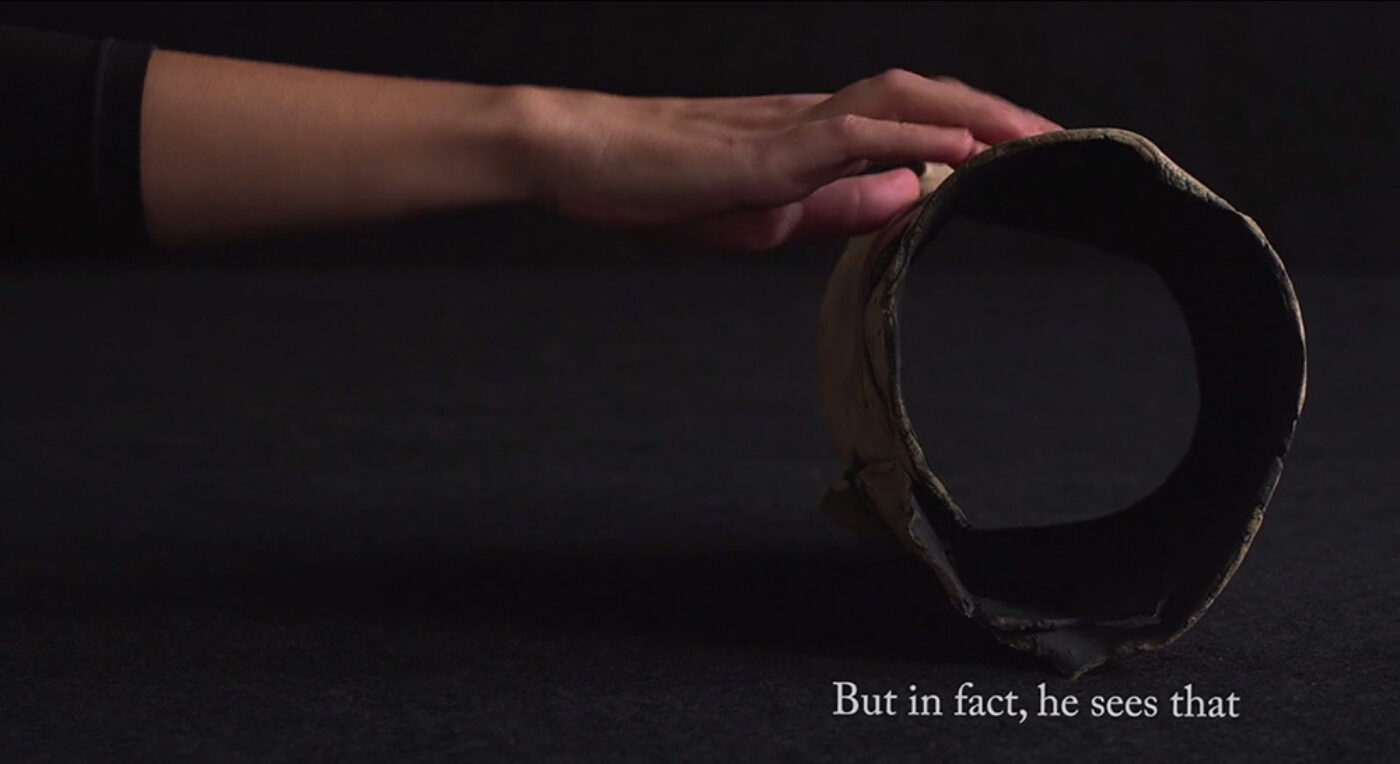 Gabriela Vainsencher, Negative Capability, 2016 (video still). All images and videos are courtesy of the artist.

“At once it struck me, what quality went to form a Man of Achievement, especially in literature, and which Shakespeare possessed so enormously—I mean Negative Capability, that is when man is capable of being in uncertainties. Mysteries, doubts, without any irritable reaching after fact and reason.”

Gabriela Vainsencher’s Negative Capability begins with a rather ugly sound, a guttural “Eh…”; a pause. Or rather, it begins with a silent image sequence, which this “Eh…” interrupts: A full-frontal, two-handed slow-mo rotation of a rough-hewn, hollow, ceramic cylinder—hands above and below the empty circle described by the cylinder—which blurs and sharpens and fills much of the frame, intermittently revealing an expanse of neck and chest against a black ground—no head, no face, no breasts. A Vanna White pose, minus the ear-to-ear grin. The voice that interrupts this manual meditation is clearly not the voice belonging to the pictured body parts; it conveys a maturity at odds with those tentative hands, even in its mono-syllabic “Eh…” Or perhaps we sense the presence of an elder, because this vocalized pause is immediately followed by an eloquent disclaimer, an explanation within a conversation we seem to have entered mid-stream.

The value of suddenly understanding something, of suddenly realizing something for yourself…
has a different emotional impact than if I give you something like an explanation.
Even if it’s the truth.
(Image goes blank here.)

It took me a long time to get to this.
Because at first it means so much…to be important;
to be efficient; to give people their money’s worth.
[The speaker laughs.]

I don’t mind. I’m not the protagonist of this film. 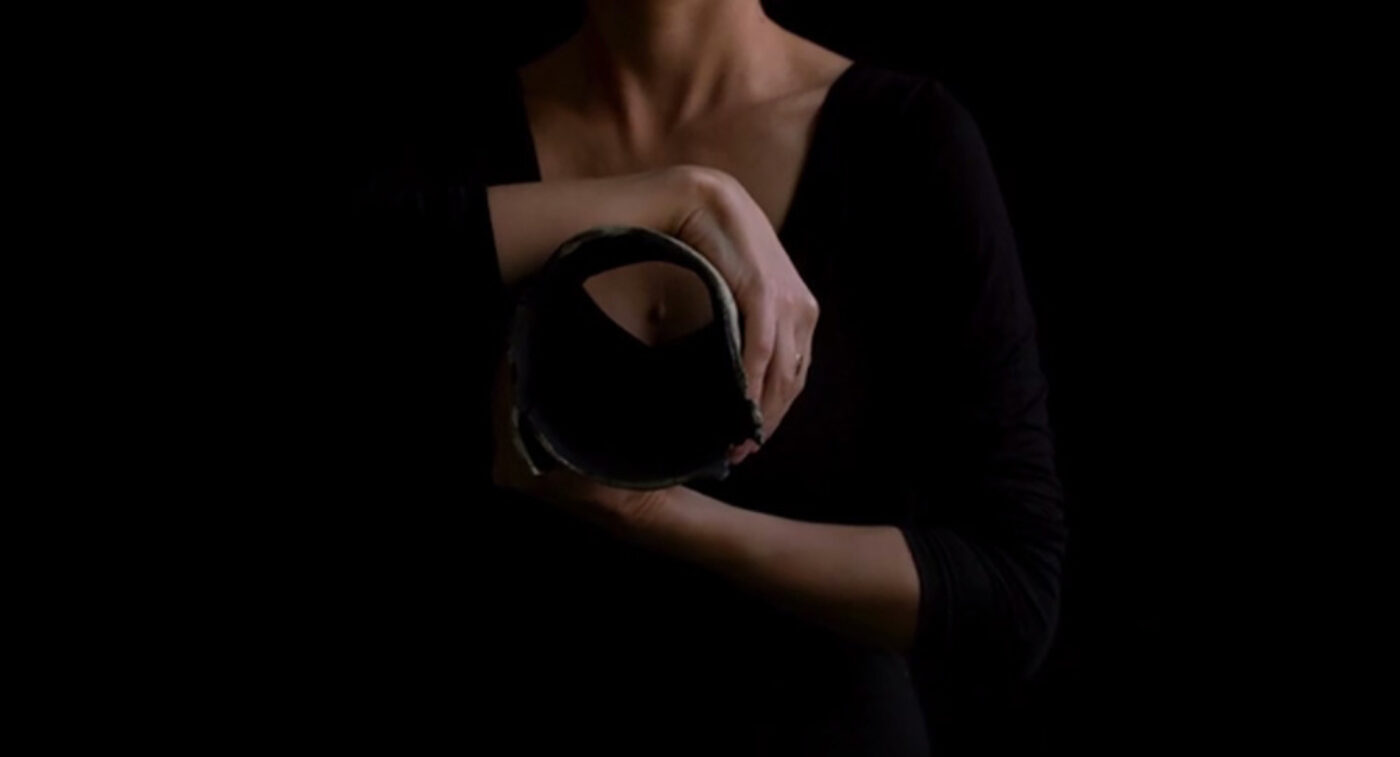 That first minute and a half, in a video that runs eight-plus minutes, sets out the terms of what’s to come: a conversation between a mother and a daughter, and between spoken words and carefully choreographed images. Vainsencher’s mother does the talking, here; Vainsencher listens silently, playing with her props. Vainsencher is indeed the protagonist of her video, but a reluctant protagonist, it seems at first. Her mother’s voice and wisdom are the project’s engine.

Recorded over many long-distance phone calls, re-cast as monologue, and edited with terrific aplomb and oblique humor, Vainsencher’s invocation of Keats’ poetic epiphany on the value of “being in uncertainty” betrays both a request for and an ironic un-readiness to embrace her parents’ love-shot wisdom, which is delivered with its own sort of groping uncertainty, via the disembodied voice of her psychoanalyst mother—born in Uruguay, now in Israel—who’s at pains to tease out her daughter’s need. The parental insights, offered in answer to questions we’re left to surmise, are also hilariously at odds with what Vainsencher gives us to look at as we listen, and render the construct of the conversation a baffling, but also unexpectedly resolved, artwork.

Vainsencher’s mother’s voice has the authority and articulation of a minister or rabbi or teacher, or parent…or psychoanalyst; of someone concerned to say something useful, and to say precisely what one means. It’s a voice that melds patience with doubt and has the comforting quality of one who has spent many years listening—as much time listening as talking. There’s also a certain nasal raggedness to its edges, which augments the performative quality and makes the listening at once more irritating and more vivid. Somewhere around the sixth minute of the video, Vainsencher amplifies these abstract aural qualities, splicing together a barrage of those unappealing “Eh” sounds, as if to make material the admission of doubt. Or perhaps, to attempt to acknowledge the difficulty of real silence and empty space. This sequence is emotionally at odds with the simple, dumb gestures of rotating, rolling, setting things out and removing them, or covering one’s face while hearing out a parent’s enlisted wisdom, which can seem to mimic rather than embrace her mother’s earnest conjectures. Vainsencher’s parallax approach, however, serves her subject of Negative Capability—the space Keats so keenly identified as antidote to any “irritable striving after truth”—terrifically. 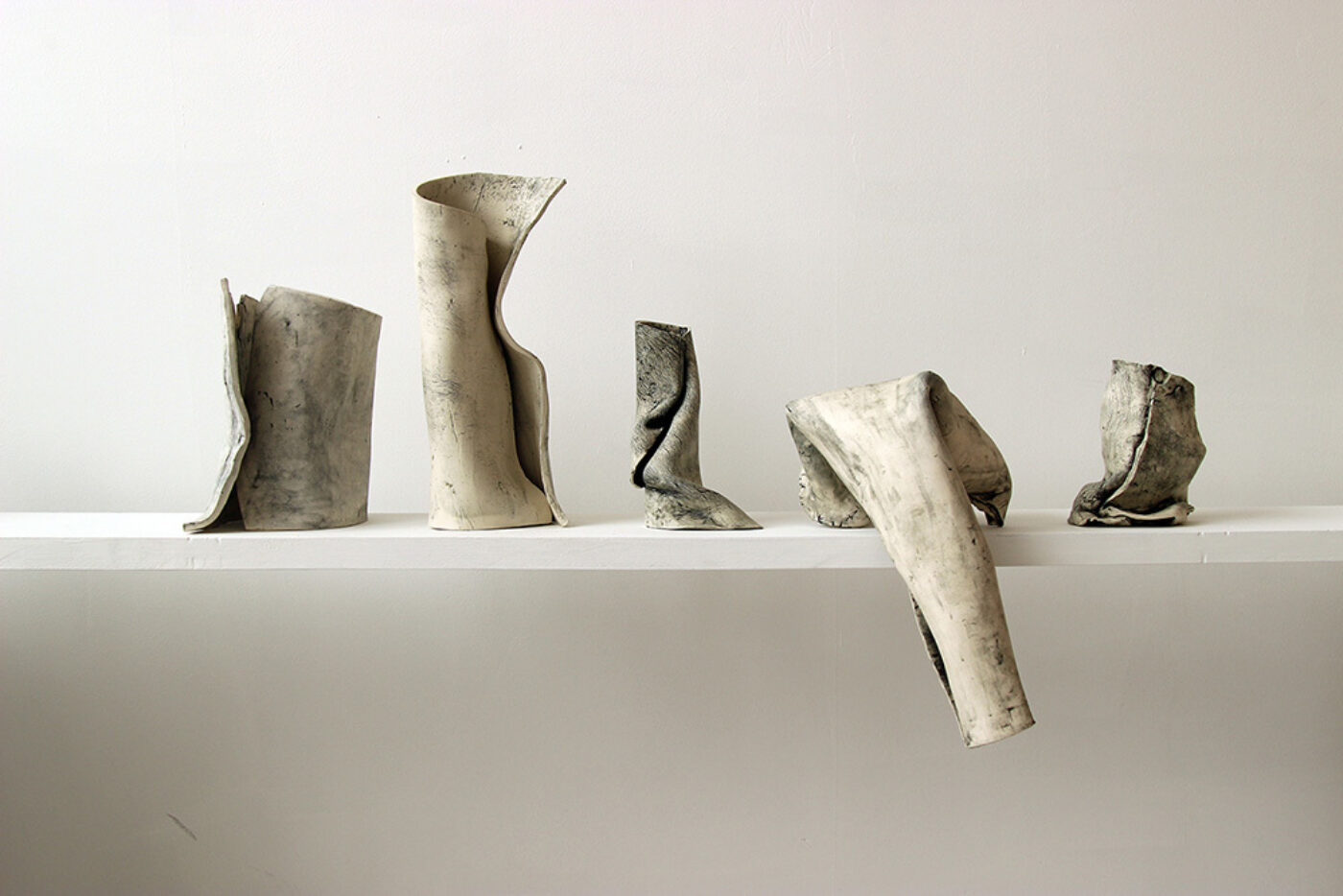 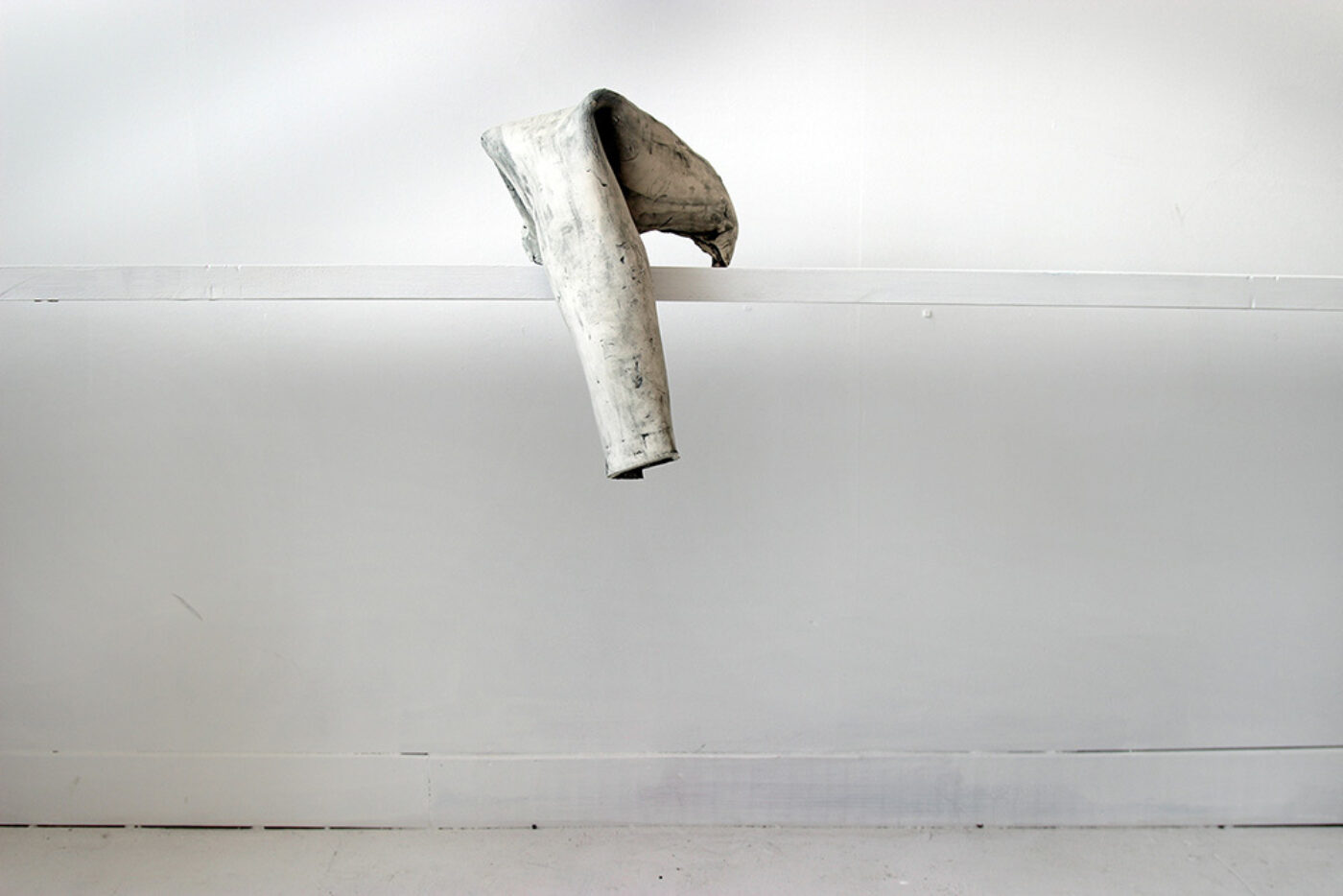 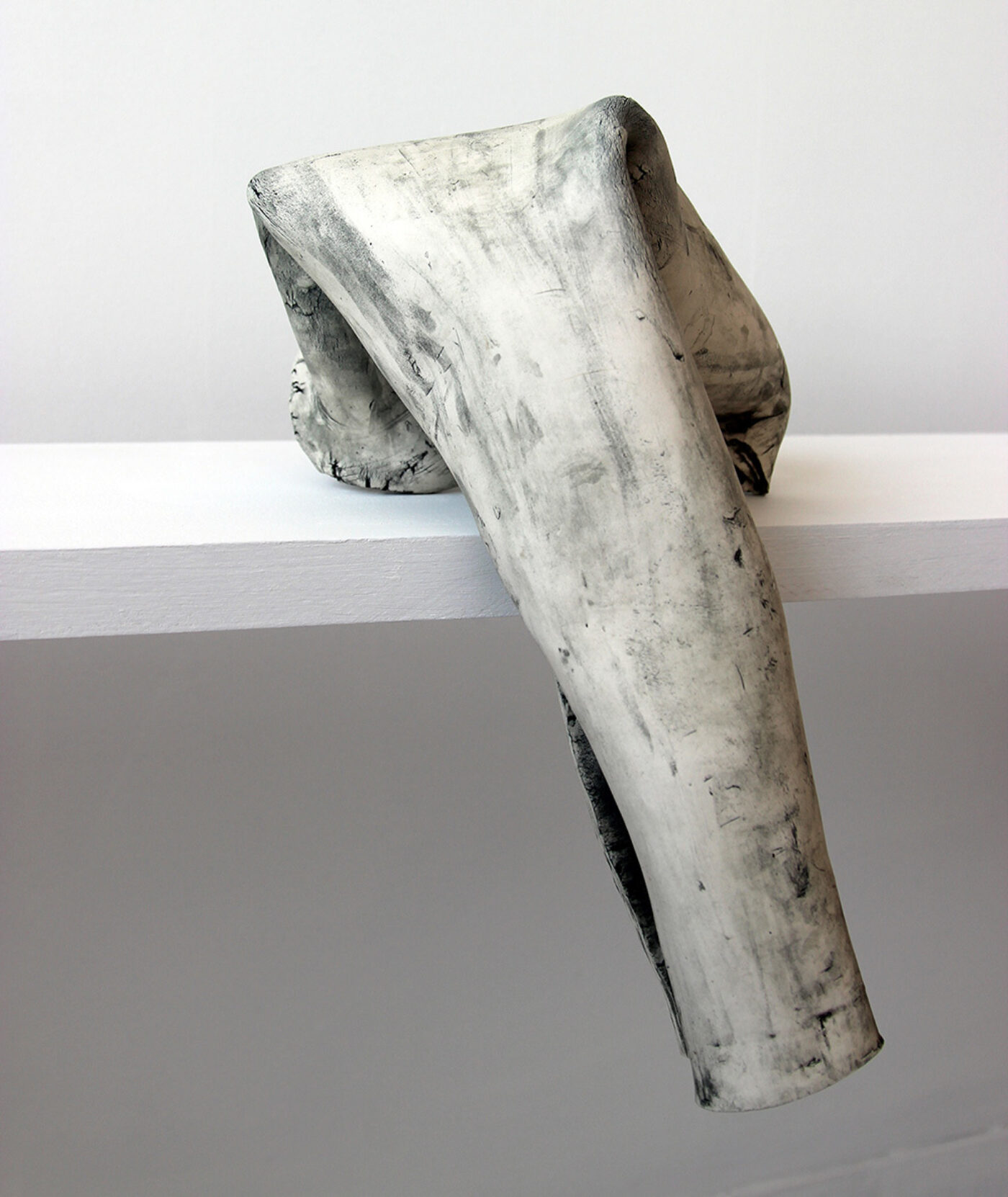 The ceramics Vainsencher makes, used as props here, are expressive but inarticulate, anthropomorphic, animated volumes. Outside the video, they have lives of their own and onomotopoietic titles like Maw and Jumper that allude to spaces that precede not just language, but fully formed thoughts, while giving aggressive shape to emotive proto-thoughts with remarkably distinct contours. Positioned on shelves, as Vainsencher installs them, they threaten to inch and even snort their way over its edge. The attenuated ambiguity of these limpid objects offers an expressive range that Vainsencher’s earlier videos—which focus on tightly controlled movements and retrievals of lost civic histories, respectively—seem just a smidge too tightly conceptualized to allow. During her eccentric, ventriloquized video exchange with her mother, Vainsencher deploys these objects and exploits their expressive capacities ironically; the quiet disconnect between voice and image, parent and child, analyst and artist, yield something even stranger and darker and funnier. 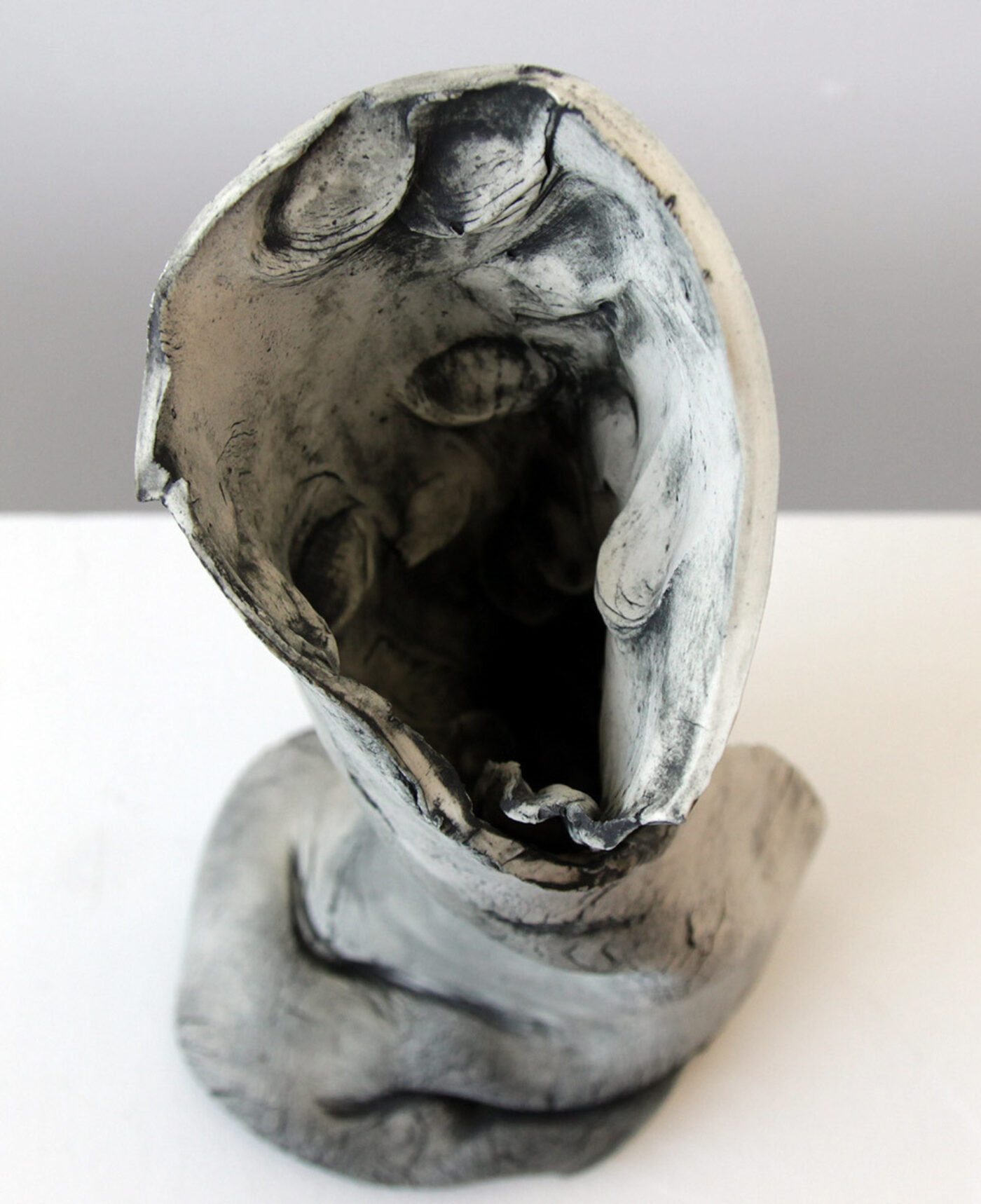 “What’s this all about, Gabriela?” asks her mother, toward the end of the video. “What’s it for? I don’t get it.” She laughs. But the artist-daughter seems to have taken from her mother’s efforts to answer her unanswerable questions the psychoanalyst’s recognition that one can’t access the unconscious by design. In Vainsencher’s Negative Capability, as in her Maw and Jumper, we are drawn into the space described, and we’re free to laugh, not just to learn. 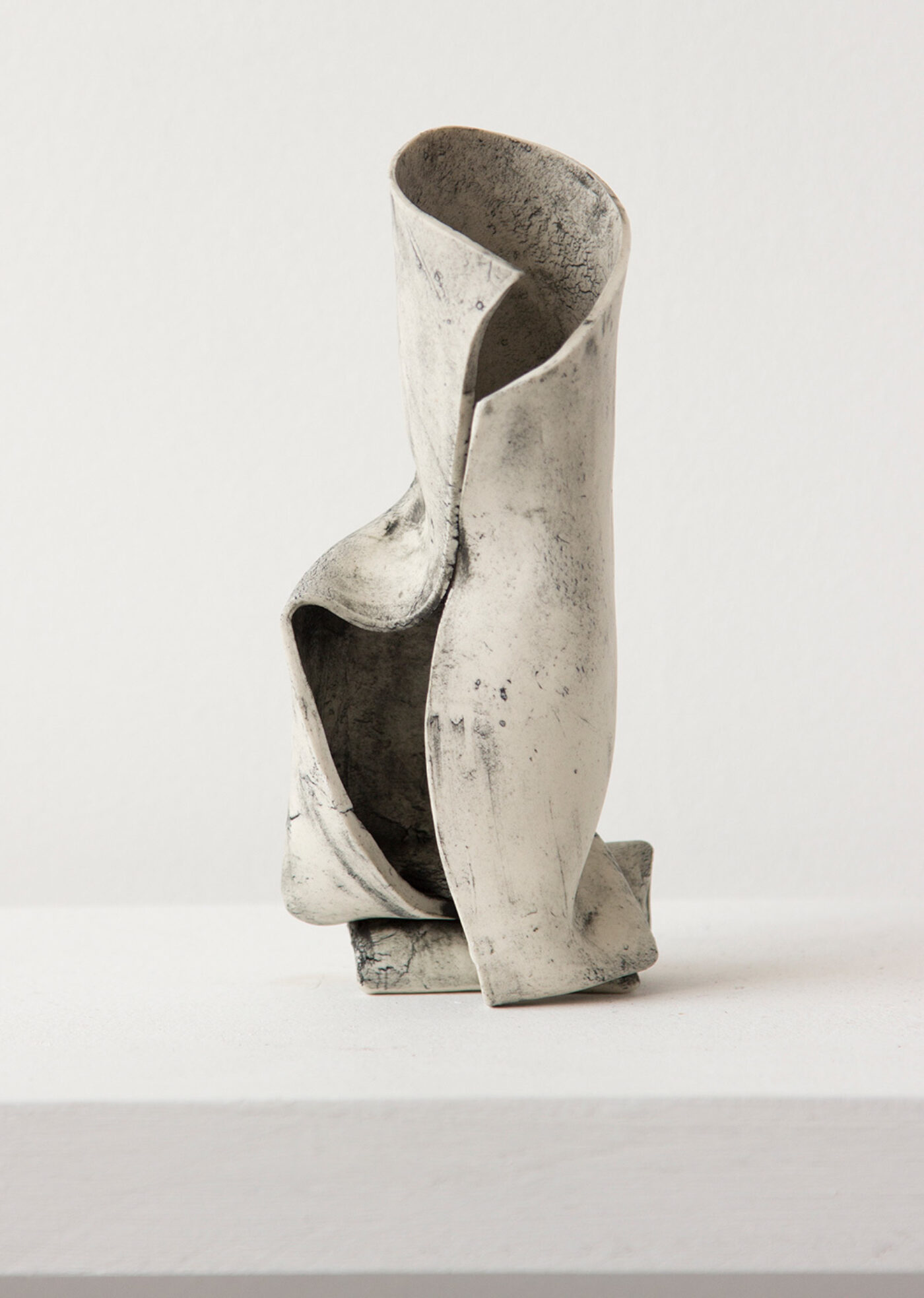 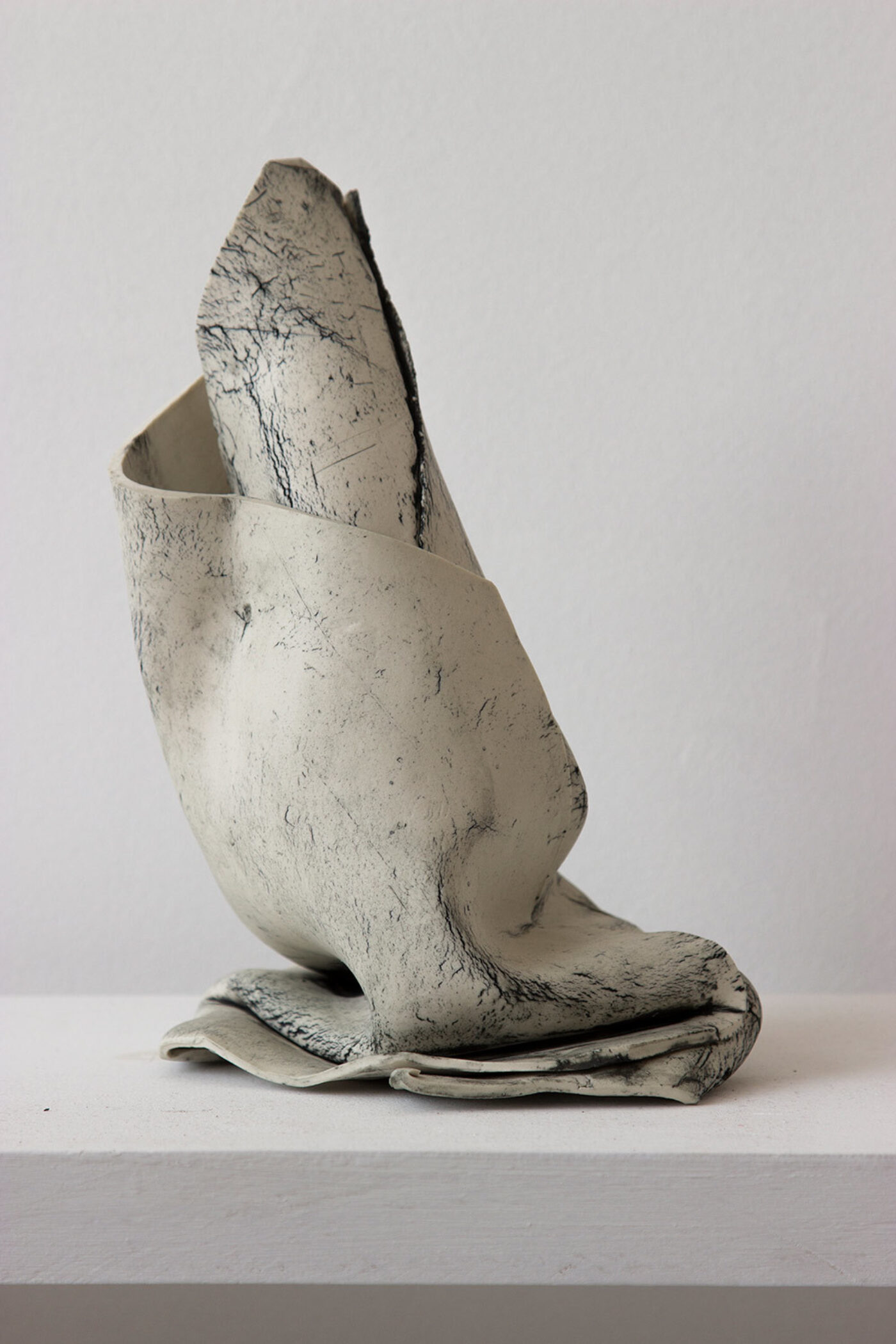 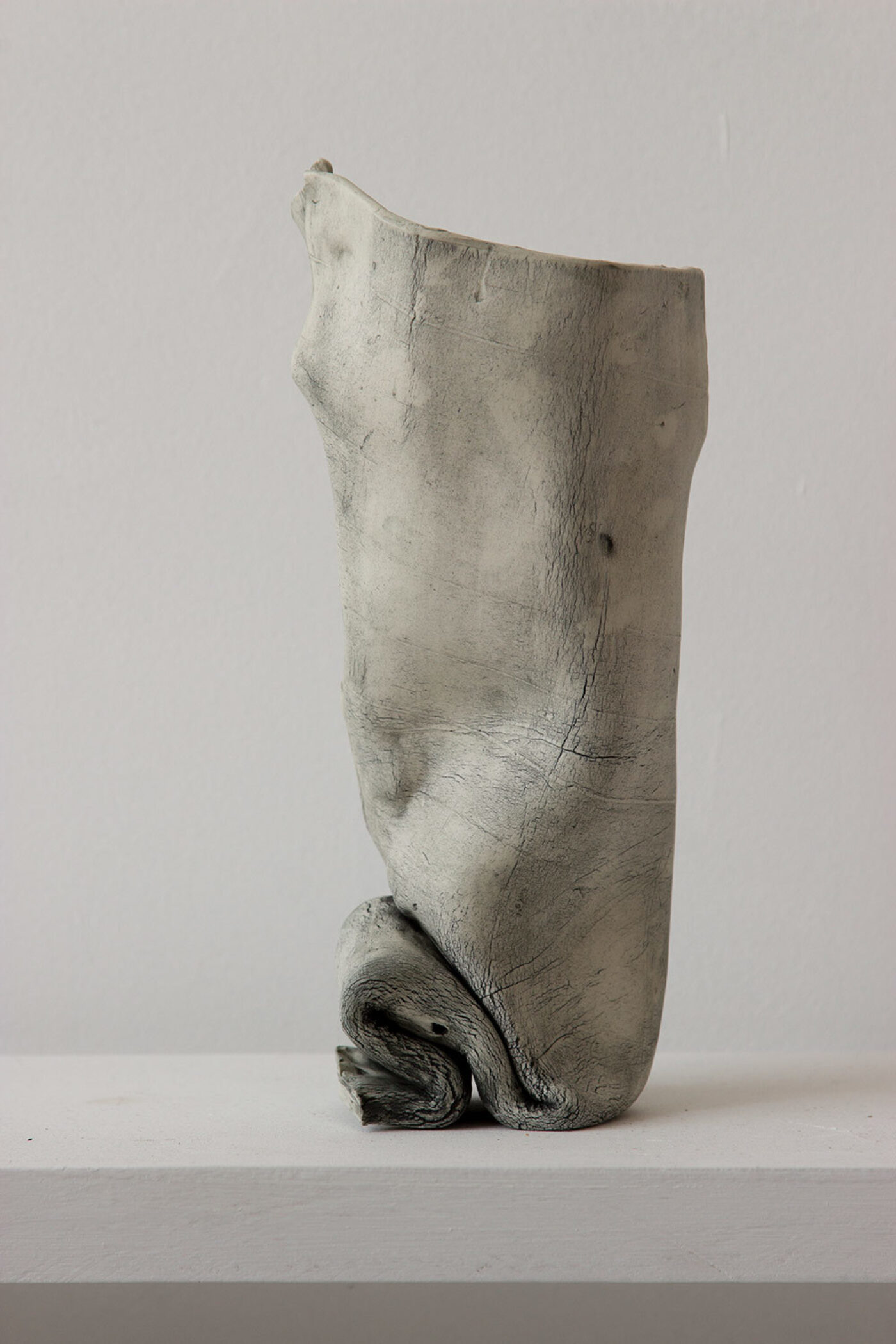 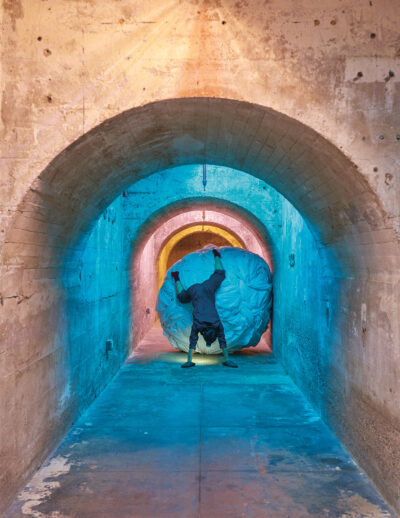 With charmingly deadpan humor, Aki Sasamoto’s performances and installations tease out just how small human existence is; despite our more evolved intellect, advanced motor skills, and ability to read and appreciate Proust, we’re all basically rats at heart, just with the added bonus of self-reflection and a love for rosé. 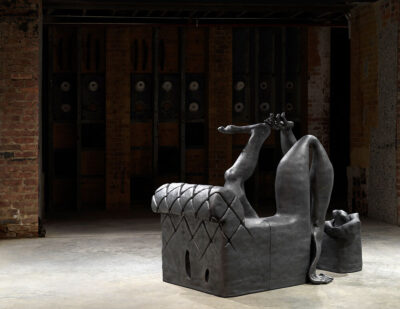