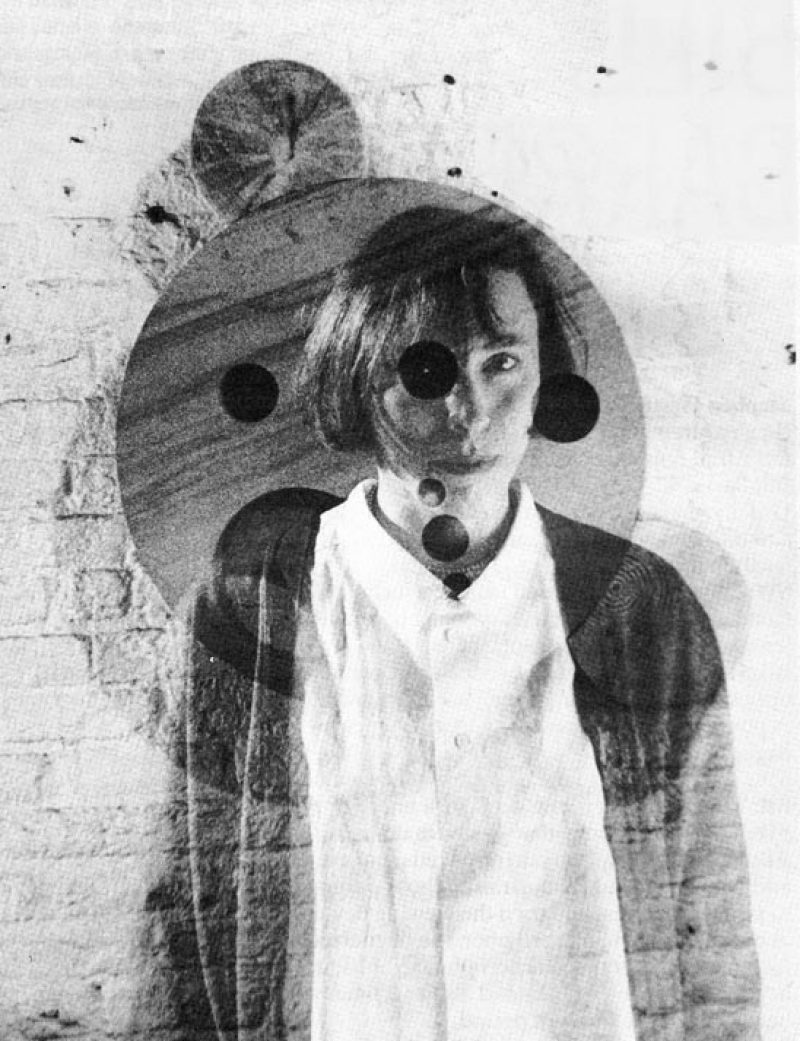 What unites the work of Polly Apfelbaum, Bill Barrette, and Nancy Shaver is their incorporation of objects and images that have a history of prior use, “found” objects and images, if you will. These interviews underscore that the haunting, magical quality in their work has as much to do with the clarity of their presentation as it does with any patina of age that has accumulated around their treasures. And it’s important to note that whatever common grace their work shares, their motives and intentions are highly singular.

Stephen Westfall You’ve talked before about simplicity, how your pieces are geometric shadows of things, how clarity is extremely important. Now, it has always seemed to me that where such formal values hold forth, the title of the work becomes more incidental. Yet, the importance of titles in your work, for instance the title of your last show, The Somnambulist: When Objects Dream, suggests that all that is there is not simply “concrete” or retinal.

Polly Apfelbaum There’s a split between the very formal and then the narrative. It’s the narrative that gives the work a push. In Tristram Shandy, there’s a line, “It’s not things themselves, but opinions concerning things which disturb men.” It’s the story which gives objects a history, another meaning. I want to give the formal clarity a push too, but I like to have that narrative layering.

SW Your titles, in a sense, supply the text. Or, if not the full explicative text, they supply a headline that serves as a springboard to ambiguity, which allows the viewer to spin out possible narratives.

PA I think the formal clarity is probably the easiest thing for people to see. The new piece, the dress with the souvenir Hopi Katchina patches, A Dress of Many Colors, plays upon Joseph’s dreams and Joseph’s coat. Joseph’s coat of many colors was soaked in the blood of a lamb to convince the father of his son’s death. Joseph was actually saved from death by his ability to interpret dreams. But for me, it’s also my coat; it’s my dress. You see the formality, that it’s a very formal piece. There are a lot of givens there, too. I want you to see the layers of meaning—my culture, the Hopi culture, the Hebrew culture; all touching in the moment of this piece.

These patches are wonderful things. They’re not really Katchinas, themselves. They’re not holders of the myth. But in a sense they become that.

PA Dreaming on a coat goes back to the Lorca poem, The Somnambulist, and to Joseph’s dream.

SW In The Somnambulist, Lorca writes, “Friend, I want to change my horse for your house, my saddle for your mirror, my knife for your blanket.” One of the things that strikes me about these lines is the proposed exchange of nomadic tools for domestic utensils and domestic furniture. Knife, horse, saddle are all …

SW Yes, they’re real objects, but they are also tools that are essential to a more nomadic way of life. House, mirror, blanket, those things imply a more stationary, more introspective existence. Do you understand what I’m saying? And that struck me. I’m not even sure whether I’m prepared to make a larger connection to it, although it’s certainly intriguing. One of the things I find curious about art in general is, I guess, there’s a reliance on place.

PA Well, it’s funny, because the earlier work goes much towards the utilitarian. I think of the Indian objects, the ornaments, of the useful tools that have lost their meaning. And what’s left. I’m getting more domesticated as I go. A Dress of Many Colors, specifically, is about making an altar out of the everyday objects of our lives, from dislocated objects from different parts of my life. It goes back to a Tristan Tzara essay, “When Objects Dream.” When objects dream, when we dream, things come together in strange ways, without surface logic. 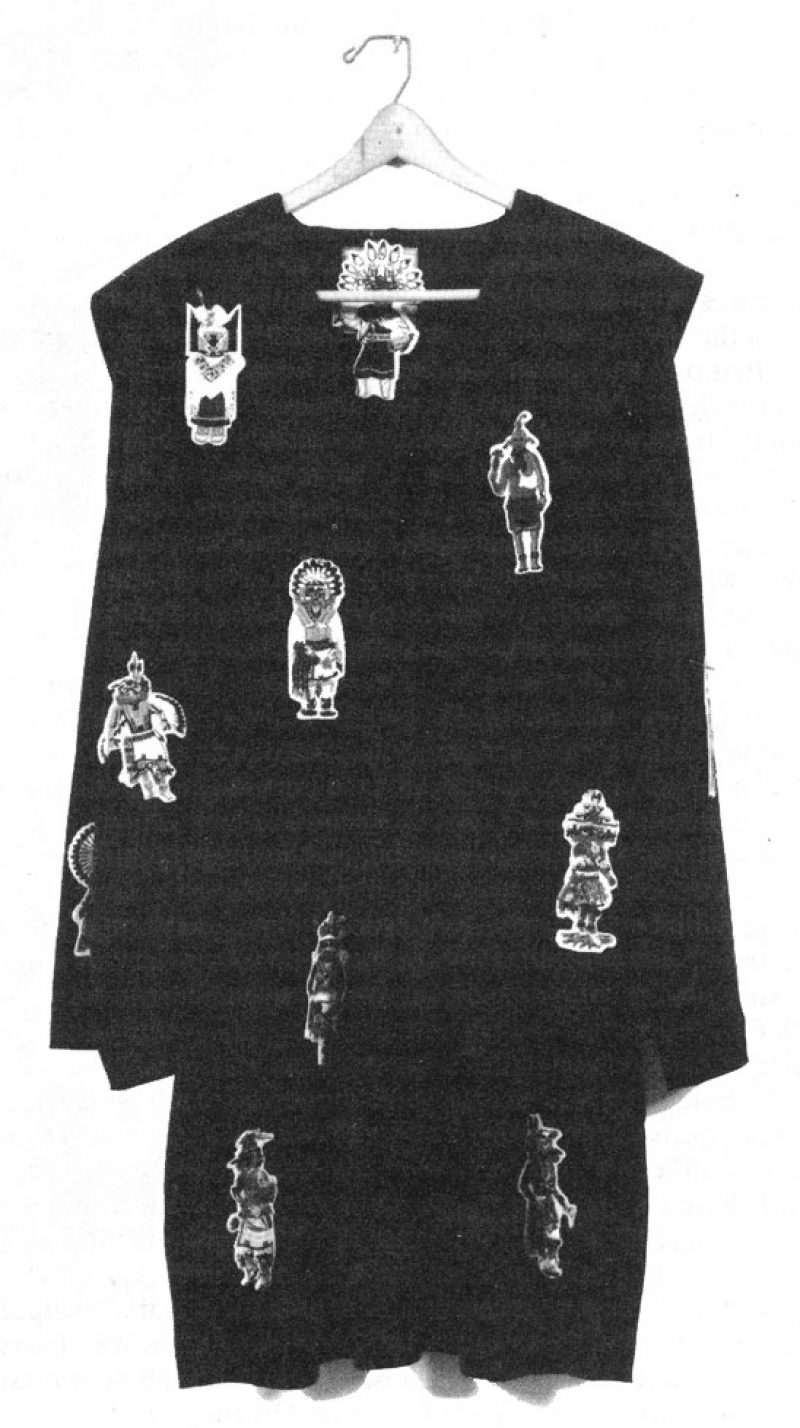 SW In your show, for instance, you had the copper-plated wishbones on the wire, you had the bored-out hatbox-thick circular wooden “templates” (for lack of a better word), resting on the steel beds. And then you had objects that were “found” or created by someone else before you. Chicken bones weren’t fashioned by someone else before you, unless you can say they were fashioned by God. Or fashioned by the chicken. But certainly the Adirondack souvenir canoes and the folk chair made out of horseshoes were. What bound all these objects of such different character together, it seemed to me, was a sense of precise intervention. As you noted in one of your statements, you give them a geometric clarity of presentation. And you brought this show of objects with so many different origins together under an umbrella of this title.

PA Under an umbrella of what happens when you dream. Because all these different things come together. Every part of your life. When you dream, things are dislocated. Your cultural associations are dislocated. So were parts of that show. More dislocated now than ever. So you take these canoes, which are so austere; casting them in iron changes their meaning. Then you take the wood objects that relate in another way—to all the formal clarity that I’m interested in.

The single piece I called The Somnambulist, the four circular discs, is the key to the show. The pattern on one disc is about the mapping of the stars; that’s one way the spiritual concerns come in. Then there’s that fabricated part of the work, the impersonal and industrial concerns. And finally, there’s the formal relationship of the whole—big to small. So while those four discs are just four discs; they are also compartments of my interests. In the canoes and wishbones, there’s another dislocation. They have their obvious identities, but they are also souvenirs and good luck charms. There’s also the formal sequencing, the movement from small to big. They dream. The fans play the same game. The Fan Dancer, an industrial object, as decoration, also goes back and forth between that.

SW I could imagine that in dreams, sometimes, functional utensils take on a decorative aspect.

PA The fan is a clover shape, a sign of good luck; it’s also an industrial fan, a fabricated part. It also relates to Matisse’s flourette; it’s a flower; it’s decorative. The fan also reminds me of Kounellis’s steel flower cut out with a blow torch. It’s menacing and it’s kitsch. So there’s this industrial kind of menace, but also this romanticism.

PA Another example of the same idea, an industrial form; it alludes to the flower; but in the end it’s just a piece of wood with holes cut in it.

SW I’m looking at the copper skates, which have that wonderful little club or clover silhouette cut out in the front.

PA That piece was basically about making a good luck charm. By copper-plating it, I made it more precious in a superficial way. For me, it was a special piece because of that clover. There’s the kind of cliché idea of good luck which ran through the whole show. Then there’s the notion of that ritualization, what we do to make objects important. Like bronzing baby shoes.

PA I am superstitious!

SW Okay. I was trying to make you say it before me.

PA Of course I am! Because that work, you know, led to all the others. That’s the first of the copper good luck objects. There are certain objects in which a part was missing, so it became an object about a missing part. When I plated the skates they lost a part. I searched all over the city for one like it and finally found one by accident. And the clover was its trademark! Which was perfect, right? So then, later, I was walking down the street and I found the chair that was made out of horseshoes and was missing one horseshoe. So I thought, it goes back. Because of losing the skate. I found the chair that was missing a piece, and it was also about good luck; it was horseshoes! If something’s perfect, it’s not good luck, right? So I wanted to add the luck.

SW Is that one of your superstitions?

PA It is true in most cultures. If you look at the Navajo rugs, they’re never perfect, there’s always a mistake. Because man isn’t perfect.

SW A soul line. If the design is really good, a soul line is woven into the rug so the design can escape.

PA So this sculpture wasn’t perfect, it was missing a part. But now that it has the missing part, it’s still not perfect.

SW And of course, they’re aiders of luck, too.

PA They’re angels of luck. The bone’s still in there. Because a lot of work with found objects is about the manipulation of the objects. With the canoes, I lost the canoes. There was something very sad about that. With the wishbones, the wishbone is still there. So there’s still the possibilities.

SW You lost the canoes by burning out the material and replacing it with iron?

PA Right, which was a very different act. I think it was a very sad act. For me, to lose the canoes, they were very beautiful. And I wanted to do that, and I think it was necessary to do that. And the sculpture became about that loss, too. And the metal has certain qualities. So obviously iron means something to me; like a copper penny for good luck. Iron for its weight, coldness, and the black color, the color of mourning. That’s what’s interesting about Calvino, which I wanted to bring up. Because I read Calvino for you!

SW That’s funny, because I brought Six Memos for the Next Millennium down. Did you read the essay on multiplicity?

PA Yes. I read for you “Lightness”, “Multiplicity” … I haven’t finished one of them because I wanted to get to “Multiplicity.” What was wonderful for me about “Lightness,” was his going to the moon, talking about the moon. Because I have two pieces about the moon: The Copper Moon, The Moon of 100 Equal Faces. He has a wonderful quote about the moon from Leopardi. This is the moon speaking, “I’m sick and tired of hearing all the clever things that scientists say about me. They seem to have nothing to do but poke their noses into my affairs. They’re always wanting to know who I am, what my measurements are, why my figures keep changing.” This is really wonderful.