Do I have one in me? Usually I can feel it. Now I feel nothing. But look, my fingers are moving. They’re pushing in keys like Glenn Gould at his first piano lesson at, like, two. God, that seems old for him somehow. He must have already been peaking at two. Gee.

So I’m not entirely brain dead. Though I did blank just a minute ago on my zip code while trying to purchase Amtrak tickets online. And I accidentally put a dot between my first and last name in my email address, which I’ve had since the Internet’s day one. I like to call it the haystack, not the Internet.

I asked Andrea if I should keep paying a hundred bucks a year to keep my Me address. I think being JeremySigler@mac.com makes me seem cool, like I’m a first generation Mac user, you know? She was entertained, enough to stop chattering her keyboard for a second. That’s all that matters.

Do you think the @ key has gotten more use lately? Quiz: Yes. This key was like a wallflower in the old days. On most keyboards the @ key has been worn down like the old wooden steps leading to a subway-tiled men’s room with ice in the old porcelain urinal and you on my buckle.

Maybe the title of this poem should be the “@ in Demand”

You know, I didn’t realize that the Apple Store’s genius bar was meant as a joke. Who are they making fun of? Themselves? I mean, I really believe in the concept of a genius. Who’s to say that some day I won’t get this call  while I’m at home watching YouTubes of the Cheetah Girls with my daughter.

“Excuse me, Mr. Sigler. I hope this is not a bad time. I’m calling to inform you that you are the winner of this year’s MacArthur.”

But those computer geeks really do know something. They really are smart little fuckers. Maybe Apple wanted to say, “Let’s get over ourselves. We’re not geniuses just because we’re … um, Geniuses.” Right? That’s the problem! It’s disingenuous. I say if they want to be that way, I’ll buy a Dell. I’ll make Dell the New Left. It does take a genius to troubleshoot a computer. I don’t take it for granted. I don’t think I can do it. Basically I only know how to turn things on and off.

Actually I don’t even know how to turn something on. With girls I say too much. I once sent my computer back to Apple in a padded box to have it worked on in a shop somewhere in, like, Cincinnati, and the diagnosis three weeks later was that my hard drive was perfectly alive. “Your computer started right up like normal,” cheerfully. “In the future, when you try to turn on your computer, I’d suggest keeping the button pressed in a bit longer.” Like you have to hold the thing in for a second. You don’t just touch it. Ugh. What a hassle.

But really, Genius is not a joke, so when they say, we’re, like, kidding with you, pulling your leg, we’re not really geniuses, we’re being sarcastic little fucks in your face, I say, back off! Wouldn’t Clint say back off? Or maybe he’d be more pent up, and click back his trigger, and growl through clenched teeth, and lock his jaw, and squint, and say, neither of us is exactly walking off with a MacArthur. That’s a genius line right there! I could direct Clint. Maybe I’ll cast him as a brooding poet with a chip on his shoulder. Or maybe finally this is the roll that could bring Andy Kaufman out of retirement, or death, whatever you want to call it.

There was a student who presented his Mensa test scores as his senior thesis project. James Kafader. There on the wall, all by itself, hung his framed certificate that had just arrived in the mail, and it read, “Genius.” It really did. We crited it all morning. (Wait, why does crited have a red line under it? I guess it isn’t a word. Fuck you! You fools! Nazi programmers! I say it is a word! Ever stepped foot in an art school?) But the kid would have made a much better piece had his certificate read, “Not even close.”

I held the back of my two fuzzy fingers up to Cole’s cheek and pinched her dimple ever so slightly and said, “Soft scissors, soft scissors,” and she said, “Dad, stop.” But my eyes grew plump like ripe grapes. That’s how they felt, because if I bit into them at that moment I’d have tasted the jellied memory of whatever that feeling is. I said to Marcella that she should come down to join me for lunch and that I’ll show her the Parkett that just arrived with the interview she did with her mom, and we’ll pretend we’re ’80s poets working for art magazines having a company-card lunch in SoHo. We’ll pretend we’re in a booth at Jerry’s. Back when the Mac store on Prince was a sad, old sack of bulk mail and grumpy men licking stamps behind bulletproof plexi.

Annina right across the street. She asked me to hook up a garden hose in the bathroom and carry it dripping over the lap of those squeamish Venezuelan collectors on the sofa in her office who were there to snag the last biggish Basquiat. And out onto the fire escape up in my Adida (a better name for the brand, I think) high tops to the glass roof to spray off the last autumn leaves. And then they left, and it was just her and the lights went out, one little leaf still holding on against the spray.

Today I’m dressed like the guy from Human League with his reddish lipstick and long brown hair shaved on one side and swooping to his shoulder on the other. I’m in a seersucker with white bucks, no socks, collar turned up, and a blow-dryer in my book bag. Tomorrow I’ll be Buddy Holly in a J. Crew sweater.

But, really, I do want to do a Johnny Cash, painfully churning, downshifted cover of that rapid pulsing song by Human League. Or is it The Human League? I heard the song cranking through the tinny AM/FM radio in the campus shuttle the other freezing morning, breath in the bus, both hands wedged in my one remaining glove.

“Don’t you want me baby?” In the elderly baritone with sympathy for the baby who by then shouldn’t want him, or me, any longer.

My cassette tapes were all stolen out of my rusted out Honda Accord and that’s the last of them. Tattoo You gone. Gone for good. Good for gone. I mean it.

Same with my bike. When it was taken I never replaced it. The cop on the corner told me the lock wasn’t even cut and that I had locked my lock, but not the bike. A case of what might be called “giving my bike away.” I never did ride a bicycle again. Rule in life: never replace a lost or stolen thing.

My massage last night, a good one. After the flip, I do enjoy a Chinese foot in soft socks sliding up onto my foothill. My body is right at this point. Any day I will be over the hill, but it all comes down to one day. I can’t stand here like a waiter with pigs in blankets forever. Or a butler politely trying to keep the muses from getting out and getting away.

And they all seem to have left today.

Jeremy Sigler is the author of numerous collections of poetry including Crackpot Poet, Math, Led Almost by My Tie, Mallet Eyes, and To and To Is For. He is the senior editor of Parkett.

This issue of First Proof is sponsored, in part, by Amazon, the Bertha and Isaac Liberman Foundation, and the Thanksgiving Fund.

Additional funding is provided by the New York City Department of Cultural Affairs and readers like you. 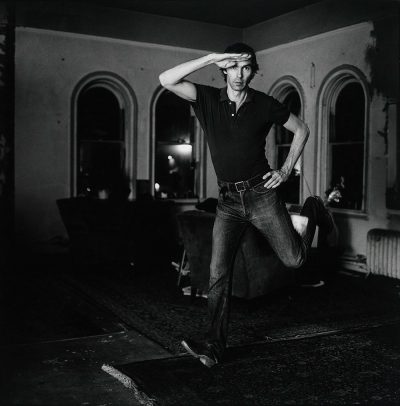