On the corner, herd of statements:
children of doubled-over socks, they don’t know it, they run
against time,
chew the doorjambs cornered in the town in the afternoon,
the rubber cheeks between the grass fling and sprout and don’t
recite,
they look—biting the mother’s breast—a history
(a filly is born beneath the foliage, is born splendid and rises
staggering
with unused eyes, is born below the mestizo grass of the earths)
and the smile to the childish way to be happy
and the sea, wave that invades the earliest dream of night.

They stop unarmed    they kneel,
they finger of the tree the branch lines over the lawn, the color of
the abstinent principles
in the attempted coup, sowed, of the elements,
then all of infancy burns in the dryness of its weeds,
in the edges of the capes, of the crosses,
like sponge cakes inflamed by the range burner, lifting smoke of
corpses,
like quaking portraits blue of mud, of cheeks quickly
brined,
and your stunned tongues small lizards and labile.

From supposing a day remembering it:
the pimienta tree expired, of meat stamps canceled,
between the chatter of old age over the table, they concentrate on
their relaxation.

Your eyes came when the wicked incalculable geometry opens,
they toss intonations of the mystery of me leaving yes,
deep figures my lines, iris furrows that still don’t understand
the irony of springs. It didn’t clear. Seated outside a palm-
thatched hut,
backs against the trunks, we looked to the uneasiness to erect,
with such cadence, the border
of the nanny on raising the ribs and lifting stabbing the moon’s
plant,
to register the damp leaf below the rigid raised-relief of the
grandmother,
between the prisoner suit’s caracoles of tones and notices;
missing the mango’s crest as the fruit falling against the floor
banging, compressing its kidney-shaped days over the yellow
smell of skin submerged
in bluish dust of Monday outside a palm-thatched hut.
Between daily tasks and cures
we heard the river knock its locomotive of water between the
hill’s rocks,
its ground, between the bramble that chokes the view and greens
—the cascade hits the mountains anguished and always cold—.
We expounded histories as the skirts fall, appear, rosy, from the
legs, drowsiness
on seeing the meat of the muscles, the spilled knees, the profuse
torrent of water,
coins of sap, when the dawn untangled in the bodies.

A dog shouts in the corner of the shack to not kill him.

The girls of Craitzen, better not even talk about them. They suck
up tunes
through the bridge’s crevices, heat up even without sun and with
saying
that dark-haired and prisoners of the trees, of the summer and the
unreal skin
over its waters.

The moon falls asleep between their legs and the night gushes, not
gold not mint,
a colt fatigued between dreams.

A dog shouts in the corner of the shack to let him in.

Asphalted the moons corner in city shadows
and volcanic voices, open-air cafes with colorful awnings all day
they crackle,
murmur
strings, splintered slots,
instruments scorched to the chairs on arriving

and not finding even a sparse language
to unname the wait or the melancholy,
I didn’t find a corner exactly where to cast the old incidents,
nor rigging to abolish useless and sad topics,
to look with eyes smoother than the plains.

But they are there fools the topics nestled in the root of the nerves
lowered toward the floor, breathing, and the nights or mornings in
the bottom
of the sea having accidents without significance; distant event.

With tongues in the muddle of the read mouths, emotion in lines
of cloth
scissored, we said centuries fallen since love and writing,
centuries fallen from
the gravestones and the dead and repentance.

The tamers of tears didn’t arrive before words and topics that
wait in the boxes,
but they are there.

The pimienta tree near the window yawned,
I opened my mouth as if I did too,
as if devouring the strained breeze, as if I wanted to strain myself
through today’s breeze, toward tomorrow or toward you,
toward yesterday, infant tree inserted in the flesh of my
time.

I stretched and fused the dream of the dangling branches, green,
sweet-smelling,
with my memory’s thin branches,
with the old ways of celebrating the first bird
in my earshot,
the first trill coiling in my eardrum,
lulling the deep dream of waking.
The pimienta tree entered through the window when the sun.
The two over my bed, the two with low voice scratched
the tiny graze, distant, the days already almost forgotten
of socks over the ankles.

Rubbed the mangrove swamp, the balance of the ballads,
the tones of the bogs, the words that together were born
when the waterfall falls, lead, over the altars and the scattered
alphabet
succumbs
to the uncorking of the landscapes, to their channel
through the sunlights of the vocable jungle
and the mountain peaks of the words sea, ditch, hollow.

Because the moment arrived in which it doesn’t fit in
with a third of blue phrases ringleted on the palate of the nights,
friend
the estuary inserted itself in the flesh with the clear cipher of the
secrets
and hiding it from the insatiable hunters
of arguments.

In the first frame of daybreak: the tip of the tongue on the nipples,
the lips stirred between the other’s saying without rush: let’s
hurry.

Time is the mast with eyes of the dead,
turned vessel and it empties itself and puffs out and what little it
lacks
and how much remains to do on deck:
we should sweep the wood, paint it and nail the loose planks,
we should wash the ropes and the rudder, clean the sailors’ backs,
tear out our eyes or cry less so as to look farther and farther,
walk running on the planks of the ship, on the planks of life,
because what little lacks to see the mast a vessel,
to see the vessel without water,
to see of the vessel the mast without time.

Salt on the tongue and stiff, quartered and with humiliation
between the legs, drains.

Made skein, the knees hugged, to the limit of the ship,
to the sea we became that afternoon and we said the body:
nerves thronging in our sexes,
and the wounds: salt on the eyelashes,
glow in the leg doubled back and blue.

Your profile fractures the horizon
and the green bird in the hilt of the ship,
blind and waiting—oh sea, we too—
for the moon so as to turn toward night and the tides.

Your voice without course, untethered tempest on the margin of
hours.

Translated from the Spanish by Krista Ingebretson.

Krista Ingebretson studied comparative literature at Brown University and the University of Chile. Her translations have appeared in Connecting Lines: New Poetry from Mexico and CIRCUMFERENCE. She lives in Brooklyn.

the rue of alch by Pablo Katchadjian 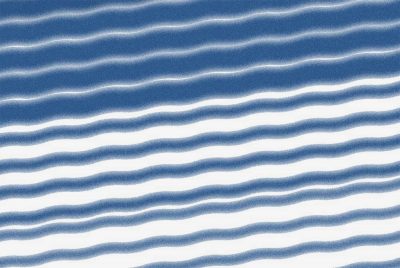