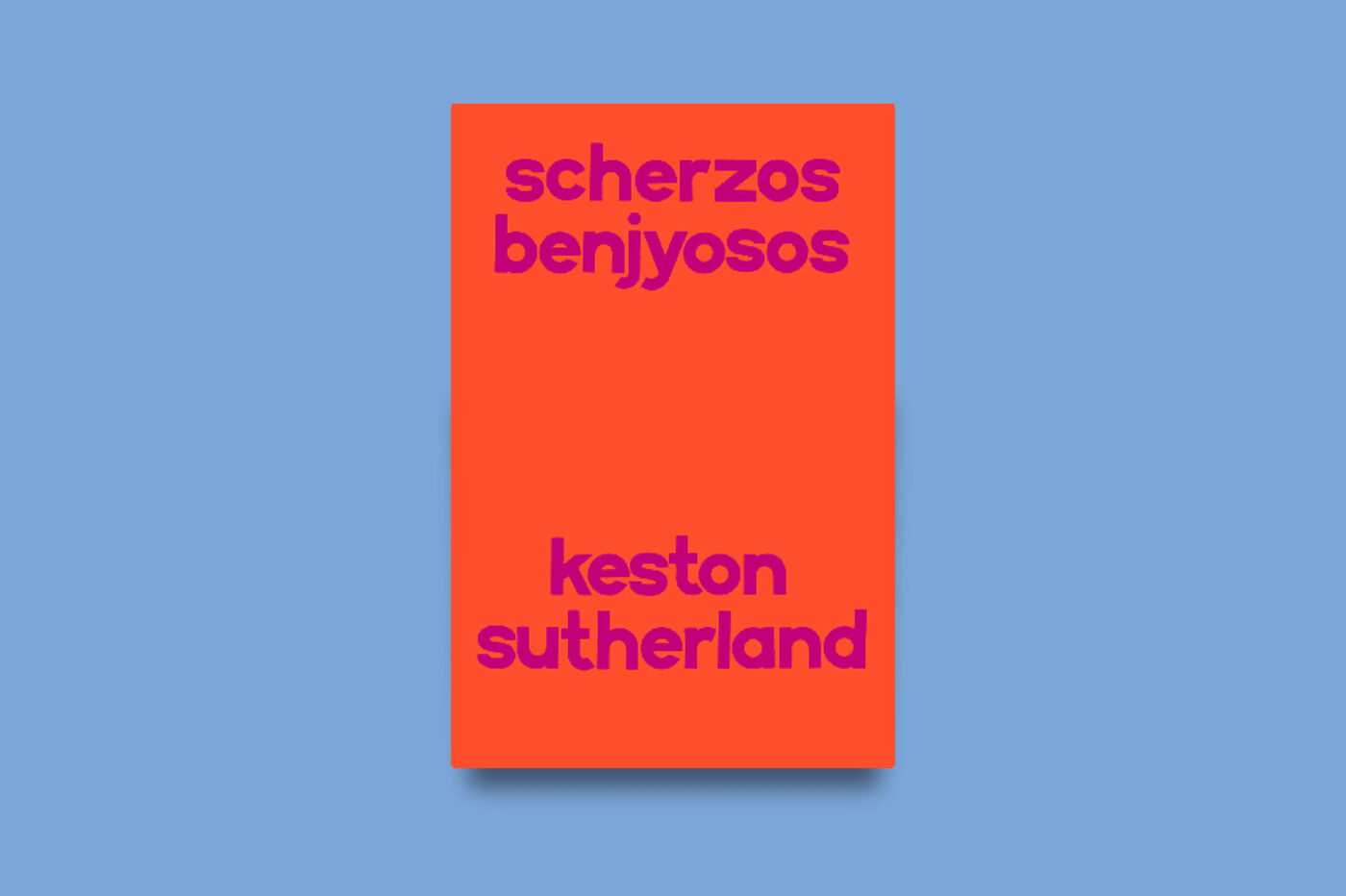 Keston Sutherland, a poet among the forefront of Britain’s avant-garde, is the author of the relentless and virtuosic Scherzos Benjyosos, his first collection of new poems since Whither Russia (2017) and The Odes to TL61P (2013). Any new work of his is greeted with high interest by many of us in the United States, not least because it comes out of a different trajectory than the experimental poetry being written here. In time perhaps this gap will be further bridged. Certainly there is much for poets to gain from engaging with this unique and unusual work. Those wanting to hear the latest sounds, in a complex music by turns nightmarish and rhapsodic, won’t want to miss it.

Robert Crawford This new book is exceptional in its propulsive energies and pulsating music, as well as its combination of stylistic variation and imaginative invention. Often there is the sense of a dreamscape, an internal symbolic world, and of images bubbling up into a void, which is the stage of the mind. The book is comprised of two long poems, “Sinking Feeling” and the title poem, “Scherzos Benjyosos.” What can you tell us about the process of writing these poems?

Keston Sutherland I’m pleased that the book’s music made an impression on you. Poetry is too often described by some jumpy synopsis of whatever story it’s meant to be telling about itself. Short-cuts past the obscurity of sensation. It’s unusual to start with the music. But I’m glad you do, because that’s where a lot of the work of this writing is, or anyhow I hope so. Before anything else it’s an attempt to find new sounds. For me, that’s where a new work has to begin: with the hardest thing, to make an unheard sound. John Milton said his new sound was for judicious ears; mine is for maladapted, paranoid ears. There’s a letter by Friedrich Hölderlin in which he tries to describe to his friend Christian Ludwig Neuffer his vexation as a poet, how difficult it is to get it right and true, and he talks about the tension between what he calls the “Hauptton” or “fundamental tone” and the “variously patterned tones” closer to the surface. I can never believe I have really started a new poem unless I think I can hear some new tension like that in the sound of it. That’s where it starts, with the problem of the sensation of truth, how to feel it, how it is when it can’t yet be felt, and how it stops being felt.

But you ask about process. Besides just beating my head against silence and solitude until the stuffing poured out, I tried to find ways through language into various states of immersion: immersion in anxiety, fear, regret, desire, hope. Often this meant cutting away at a passage of writing repeatedly, for nights or even years on end, until the whole thing was a knot of scar tissue and there was nothing left to open up or find; and then if I was lucky, right at the point of giving up and just amputating the whole thing, some new sound would ring out, and I’d keep that: a few words, normally. It also meant—and this is a problem that the book confronts directly and even ventures to narrativize—sounding out by a kind of echolocation the limits of whatever refuge or retreat for thought and sensation I was stuck in at the time, some sanctuary for paralyzed life where I was hiding out without knowing it, mutely screaming about how I couldn’t get out. There are probably lots of places like that where I am still stuck, but the book was, among other things, meant to be a sort of shoehorn for flipping me out. You mention dreams. The book is in some ways dreamlike or even dreamy, but if the comparison isn’t too incredible I would say it’s not a straightforward dreamy elsewhere, not an idyll or nightmare, but somewhere like the worlds in Franz Kafka’s stories, a dislocated reality structurally adjusted by a comically inexorable logic. It’s also like Kafka in that it’s a comedy that takes a long time to laugh at.

RC Kafka is a helpful touchstone for this work, as is Samuel Beckett, whose fiction you’ve previously discussed. The use of narrative in this book, which is mostly written in prose, is very interesting. A narrative may progress somewhat linearly, or it may be punctured by a whirlwind of images and considerations. Also, many of these narratives make evident use of “fictional” or invented scenarios. What role does narrative play in these poems, and how important is it for the reader to follow the narrative? How would you characterize the affinities and contrasts of this work in relation to experimental fiction?

KS I don’t read or haven’t yet read experimental fiction, unless that category can be stretched to include economics research, policy briefs, and the weekly roundup of good news from senior management. If you mean experiments in contemporary novels, I haven’t got to them yet; there’s too much old stuff I’m anxious to get through first. I find it more nutritious, not to say emetical, to my poetic imagination to read Thomas Hoccleve, Heinrich Heine, or John Donne. Scherzos does look like prose, mostly, and maybe it really is. But I don’t think so. I’d say it’s at best prosimetrical but with an oblique or delusive prosaic tendency. I’ve tried a few times to think out loud about what kind of writing this is, this text clamped between hard margins, as if the outer limits had to be defined half at random by the width of a tunnel or pillar. I think you were there one of the times I had a go at this, at New York University back in 2015. At that talk I called poems that get crammed or crushed into this sort of semblance of prose, or dissemblance, “blocks.” The scherzos are partly blocks in some new variation on the sense I tried to develop then. But all the poems I have made in block form do something different with the block; they are all blocked, blocked in and out, differently. The scherzos work over a lot of experience and in particular a lot of pain that was until now blocked out of my head, or rather, it couldn’t be heard there with a clarity that I believed in or could trust or care about. That’s something that happens in these poems that I think has not happened in the same way in anything else I have written. They end up making things clear.

But I’m conscious as I say this that it’s liable to create a false impression. The clarity of the book isn’t easy, or easygoing, not at all. The clarity it ultimately finds a way out into, the clarity of the fourth scherzo, does feel, to me, like a rare moment in what is otherwise a madly congested and contorted book: really, I think at points a book that is, or that has gone, mad; and most of the narrative, if we do a basic count by number of words, is obscenely disjointed. A “whirlwind of images” would be putting it very politely indeed.

RC The fancifully idiosyncratic title Scherzos Benjyosos, which might be paraphrased as “Songs of Benjy,” introduces the title character. First seen as a boy celebrating his birthday, Benjy quickly comes under threat, as the speaker divulges a plan to lead him into a trap. Could this be dramatizing the dangers that face anyone in growing up, as a corrupt world greets the vulnerable? How would you describe the relationship between Benjy and the speaker and the way the themes raised here fit within the poem as a whole?

KS I’ll have to demur at this description. The title can’t, I think, be paraphrased like that: the scherzo is not a song, and benjyosos is not a genitive, but a musical direction, like arioso or dolcissimo. The earliest scherzi I know, Claudio Monteverdi’s Scherzi Musicali a tre voci (1607), are indeed works for voices that were and are sung, but they’re not songs, exactly. The question where Benjy is first seen is not easy to decide, anyhow not for me. Following a preliminary request not to be tortured until the end of life, the third section of the first scherzo proceeds to a patient explanation that there needs to exist a “polymorphously ordinary” corner, one that “you once hid,” and that this “has to become a name.” The poem then busies itself with determining what this name should be, why and how it should be accepted, etc. Fortunately one of the options is “Ben.” Benjy is then caught evacuating his phospholipids in scherzo 2, among other trespasses. His persecution is in full swing by the time we get to the start of scherzo 3 and the happy announcement that today is his birthday. I don’t want to say too much about the birthday party, in preparation for which Benjy is instructed to barge through a wall of presents and fly out the window into a bush of pampas grass, but I will say, because it’s a pleasure to talk about it a bit, that like—again I’ll have to ask you to forgive the farfetchedness of the comparison: deep breath—Dante’s Vita Nuova, this is a book that switches between prose and verse and is about the birth of a life and the power of death to abruptly determine what that life means and is for.

The scherzos are prematurely elegiacal or, rather, propaedeutics to future mourning. They are also poems about class and about poverty. Benjy later shows up as a zero hours delivery driver in an automated message confirming that your order has just been picked up—this among loads of other disfigured visions and avatars. The poems are about the torture of poverty, in childhood especially, and the crazy, violent fantasies of escape that people always have and sometimes act on when they’re paralyzed in states of deprivation. The meaning of fantasy and projection is quite different when you are poor from what it is when you have money and freedom.

One last demurral. I have never much liked the fallacy that poems have “speakers.” I think it tends to work as a surreptitious naturalization of poetic language, which ought first of all to be felt in all its force as basically not in the mouth. There is plenty of orality in the scherzos, lots of it sadistic. But I can’t find a speaker. In some passages the language does briefly get a phantom speaking part, but I couldn’t tell you anything useful about the casting decision or what is on the other end. 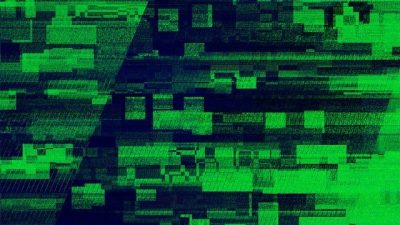