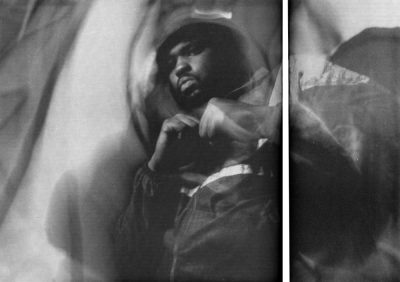 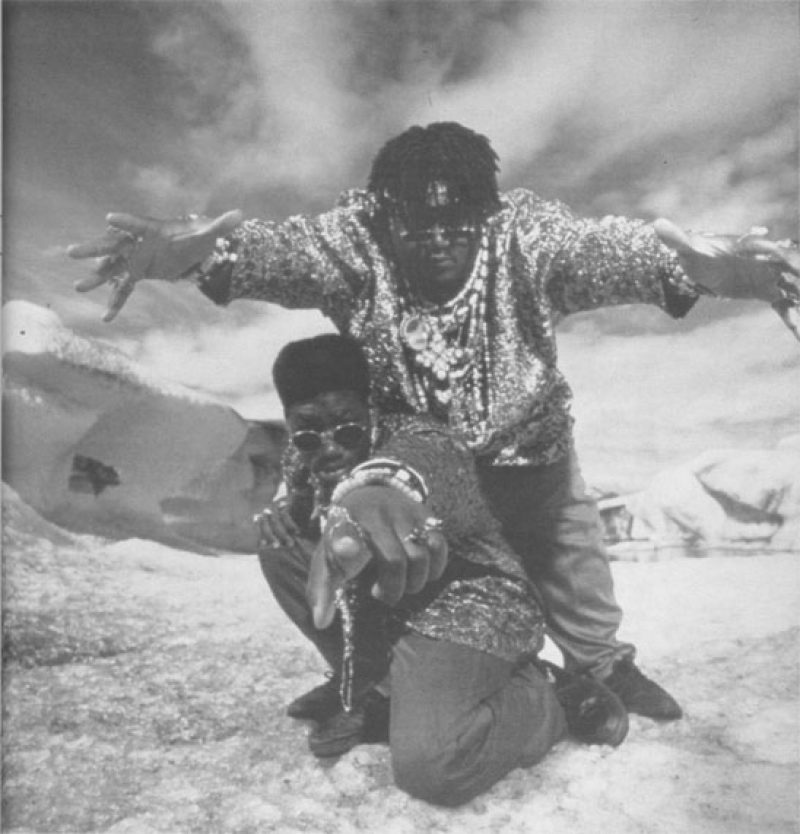 I was walking in the East Village when I ran into an A & R (the guy who signs the acts) friend of mine and let it slip that I was carrying an advance copy of P.M. Dawn’s debut album. He tried everything from wheedling to actual physical assault in an attempt to wrest it away from me. Finally, he got hold of it himself and remarked, “Boy, there hasn’t been a buzz like this about a new act since … the Sex Pistols.”

Produced and sung by brothers Prince B. (21) and DJ Minutemix (19), who hail from Jersey City, Of The Heart, Of The Soul And Of The Cross: The Utopian Experience was recorded and released first in London, where the second single, “Set Adrift In Memory Bliss” zoomed up the charts and sent reverberations stateside equivalent to a sonic boom. In their work, you can see a throughline from the ’60s harmonies of Crosby, Stills, and Nash to the romantic melody riff of “True” by Spandau Ballet (sampled in “Set Adrift”), through the lushness of “West End Girls” by The Pet Shop Boys. If you’ve ever sat in your room contemplating infinity and discovering it had a beat, then you’ll understand why this record is being hailed in some circles as “the future of hip-hop.”

I asked my friend producer/writer Mazz (Malcolm McClaren, The Breakfast Club ) to accompany me when I went to meet the brothers at Noho Star for an interview.

Lynn Geller When did you start doing music?

Prince B. Music was just a family thing we always did. My father did it, my mother does it, my uncles are DJs in New Jersey, and my little brothers are doing it. My mother sings gospel in the church and my father started off playing congas with Kool and the Gang in the clubs, before they got big. He’s going to make a special appearance on our next album.

LG Were you listening to rap growing up?

LG There’s something I’ve been thinking about. I have a theory that if kids hear a music sample in a current rap single, like “ABC” by the Jackson Five in the song “OPP” by Naughty by Nature, then they might go out and buy the original record it was sampled from, in this case, the Jackson Five. Would you?

DJ Minutemix Yeah, I think I would.

LG A lot of rappers use other singers on their records, but you sing the choruses yourself.

PB That’s one way of getting my point across.

DJ We used to sing in church when we were small and we had this group—me, Prince, and my younger brother. We didn’t sing hymns, we made our own stuff up.

LG Can we hear any of that?

PB All the songs on the album have a spiritual aura about them. It’s better to feel spiritual then to act it. I never loved God until I left the church. In every religion there’s a phrase that says, “Do unto others as you would have them do unto you.” If people acted on that it would be a better life. Be excellent to each other, you know what I’m saying?

Mazz Your record uses rap to spread that idea.

PB It doesn’t use rap at all. I’m just feeling my own thing and it comes out so close to rap because it’s talk, it’s conversation. But it’s the lyrics that separate us from the whole rap vibe.

Mazz So you don’t consider it rap at all?

PB No, I haven’t written a rap song in a while. When you do rap, you have to condition yourself to a certain frame of mind. Up-front, in-your-face, laying-it-on-the-line type of sound. Delivery is what I find interesting about rap. The wholeheartedness of it. The words, I don’t really listen to anymore because they’re sadistic.

PB Yeah, that’s how it started out. There were a lot of rappers who were black and trying to prove their manhood, but it’s beyond all that now. It only makes things worse. I think Public Enemy makes mountains out of molehills; N.W.A. don’t say anything at all. The only one I say tells the truth is Ice Cube. He tells it exactly like it is.

PB “Paper Doll” is basically a song of unity. I used paper dolls to demonstrate how I think we should be … like the little cutouts that are holding hands all the time.

LG You mean the little ones you make in school?

PB Yeah, I just used that image to show how people should be. No one thinks they’re prejudiced.

LG Do you think you have to admit to prejudice to get over it?

LG What have you been prejudiced about in your life?

PB I guess a lot of things, though I’m not really racially prejudiced. More emotionally prejudiced, not caring about anyone except myself most of the time. It isn’t all that great, but it’s a way to cope without being constantly affected by everything.

LG You mean otherwise you might feel overwhelmed with responsibility for other people’s states of mind?

PB Everyone and everything. (Holds up a shrimp on the end of his fork) I mean, here’s something that was alive. If I think about why this died, or why that died, I’d go crazy.

Mazz There are many references to death in your lyrics. Do you think about death a lot?

PB I don’t. At least I don’t think of it as everyone else does. If I die, or someone around me dies, I’d be sad because I’d miss them. But basically it’s no big deal. It’s like graduating from school and you can’t see your friends. It’s a part of life, a big part.

LG Do you read poetry? Your record is so poetic.

PB No, I read a lot of metaphysical stuff.

LG Your songs sound very dreamy. I mean, they have the logic of a dream, you know what I mean? Are you inspired by music or do you write the lyrics first?

PB I hear the music first. How ever the music makes me feel, I take it from that.

Mazz I find so many singers and writers can’t actually write their lyrics to preexisting music, but have to do it the other way ’round. They come in to the studio with the vocal idea and then the music is written to the vocals.

DJ We usually do it from the sample, or we write our own track.

Mazz Do you have home studios?

DJ Not anymore. We go to London and use Gee Street Studios. It’s real cool, man, we can get our ideas out real quick.

LG For the benefit of the readers who aren’t musicians and don’t know much about a recording studio, how do you make your music in a studio?

PB Well, first we sit there for about three hours listening to our favorite records, right, and then when we come across a musical idea, we sample it, loop it, and then play it back. You get your own vibes to write the lyrics.

LG You even sample the Beatles. Are they a favorite?

PB The Beatles, I never liked the Beatles ’til I heard their later albums.

DJ “Lucy in the Sky with Diamonds.”

LG You liked them after they took LSD. (laughter)

Mazz How much are drugs a part of what you do?

Mazz I don’t know if I believe you. What about lyrics like, “Reality used to be a friend of mine,” and “everyone get out of your bodies”?

PB Well, I just think like that all the time.

LG Do people always ask you about drugs, since your work is so psychedelic?

DJ All the time.

PB People constantly tell me that I should take them.

LG You obviously like ’60s music—Crosby, Stills, and Nash, Beatles, Joni Mitchel. How do you find that stuff, radio? Old record stores?

PB From our father.

DJ Every year he comes up with a different group and we go, “Alright.”

DJ When I was young and my dad used to play guitar, all he could play was “Lay, Lady, Lay.” I thought he wrote the song, ’till I heard it on a record.

LG That’s so cute. Pretty good writer, your Dad. Besides classic pop songs, what else do you listen to, jazz?

LG I think a lot of the songs on your record are romantic.

DJ All the women say that. They go, “I love it.” So, I like to carry it around with me.

LG Do you have a romantic idea about love?

PB Yeah, that’s what “Set Adrift” is mostly about. But it deals with different levels and types of love.

LG I read an interesting quote of yours. What do you mean by “Everyone’s female inside and out?”

PB Everyone is male and female inside and out. You’re conditioned by what chair you are sitting in. Every guy has something feminine about him and every woman has something masculine about her. That’s just the way it is.

DJ I get PMS every month. Every month I get mad for a week.

LG Really, good for you. I’m glad to hear a man admit that actually. (laughter) My mother once gave me a button that said, “Beware, I have PMS and I’m armed.” But to get back to the work, Prince B., you were saying that you’re going to move to England, why?

PB I like the vibes; it’s a totally peaceful aura around the whole place. New York is really stressed out.

LG (to DJ) But you’re going to stay in Jersey City?

PB He misses his girlfriend.

LG I knew there was a woman in the picture. But then how do you work together?

LG Well, it’s a gorgeous album and it’s hyped to be mega successful. A lot of musicians admit that they want to be the most successful, play the biggest stadiums. Do you have any goals?

PB I’m doing what I always wanted to do. I’m a musician. I have to gather other information from other music to make my own. But when I write lyrics, that’s a different story. That’s what I do regardless of whatever else is happening. Doing so cancels out a need for people to listen to it and understand it. It’s more like writing footnotes for myself to live by, rather than for other people.

Lynn Geller is a writer and music supervisor on films.