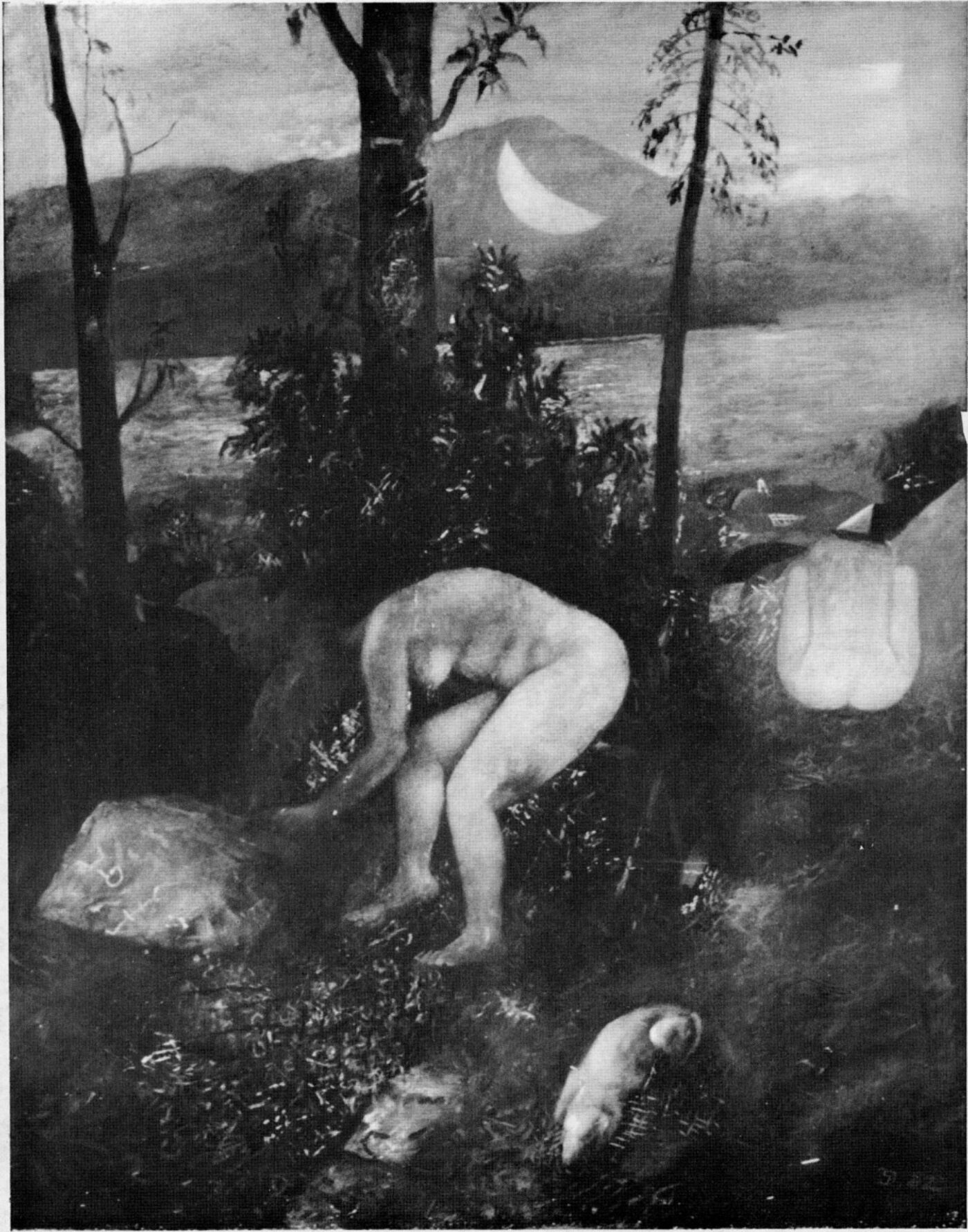 I am a creature come out of its shell, half dead, half alive; half stone, half man. If I were a seal, or rather, had the body of a seal, I would dive with my sleek seal’s head into the sea beside which I now walk, seize an oyster from its cold bed and crack it on these stones, eat it in a cool wet gulp. And dive again, frugally picking and swallowing in my game. But such a creature of the cold north I have only heard rumors of. It may not exist.

Man is so frail. No graceful seal’s warm waterproof coat nor oyster’s hard shell and resilient membrane to grip the rocky edges of the sea. An awkward, vulnerable piece of flesh is man, prey to the elements and to his own inner turbulence. For all the examples of my illustrious lineage, I alone must learn and relearn all that a man may suffer in this world. I have been slighted in every way. By the elders for my youth; by youth for my presumptions to authority; by my companions for my love of the company of women; by women for my involvements in nightly debates with my companions over policies of state. The treats at Syracuse were small matter. And yet, to sacrifice all that makes daily life worthwhile in efforts to secure a future … what utter waste.

To be misunderstood, that is the greatest waste of all. To be ostracized, as I am now … Am I not a man, the most perfect, the most godlike of creatures? No, godlike only in the ability to conduct a city-state, a protection against both nature and his own kind. Man is a poor imitation of the invincible gods who may suffer emotion but are out of nature. Caught in the middle, between gods and nature, man alone has knowledge of his own imperfections and can build an Athens, pearl of city-states, to belie his frailties.

Oysters, the lowest of creatures, are frugal animals, filtering the limitless sea, making pearls out of irritations. So with me. Irritations attract themselves to this vulnerable flesh as surely as grains of sand lodge themselves in the soft oyster-maw. But I may speak out for myself, having still a tongue in this parched throat … Stoma … Anastoma … assuming there is anything of interest left me, an unobserved observer at the edge of the sea, cast out from the world of men, a bit of flesh drying in the sun.

It is easy to crush a man. The murderer and the murder victim marvel alike at this knowledge. The crayfish, the serpent, they can abandon their shells or skins and grow another, as they grow. What is man when forced to abandon his city-state? Shall I grow another Athens around me? Create temples of shining cut stone to be inhabited by me alone? To what purpose …

Man needs his own kind in a labyrinth of streets and buildings that lend a concrete form to the convolutions of the mind, as the perfect spirals of the conch define to sight and touch the chambers of an unfolding universe … irrefutable image in palest pink stone of shell, image of the movement of all generation. Chaos becomes cosmos in the artifice of even the lowest of creatures.

I am cast out of my shell, spiralling beyond form to what perdition?

But I am free, newly emerged from my manmade shell, my Polis, pearl and protector. When I saw that the shells were cast against me, what was my first thought? One ostrakon, and my life is altered. Anything is possible! Anything may be expected from the free, the unfettered, having less to lose. Those who live outside the law may not be bound by them. Is that the truth? Do I not carry within me the law … lex scripta and lex talionis … that has so coldly cast me out onto these hot desert cliffs at the edge of the dark sea? Am I then truly free?

The wolf that is caged is crueler than the wild one. So, was it true that I was cruel in my confinement? Being thus a bearer of the law, I’ll secrete another city … but how, without the hard compression of the jaws of state and religion? I wanted to break that political turbulence down into a perfect balance, what the wild creatures know. Now I must dream a new shell that will grow in proportion to my lone body politic.

Now the dust lies thick about my ankles on this road to nowhere, beyond love or ire. I walk upright along the sea cliff like a man, unable to fly through the blue glittering air or swim the deep green waves, being neither bird nor fish. My women and my woven cloaks I no longer possess to comfort this roasting flesh. Here, there is no proud architecture, no smoothly dressed paving stones, no murmuring fountains or public wells for gathering gossips. Those black birds circle above discreetly, my only attentive companions, waiting for me to stop. I shall soon be their public gathering place, my bones the steps on which they’ll perch, my blood their fountain. Why do they not kill me? They wait for Death’s own time.

What is murder but anticipation of the inevitable, seized? A civilized act; animals do not murder. What is death? An outrage against the sacredness of life … or, rather, against the idea of the sacredness of life. Since each man knows that he posses it—and for those whose possessions are great, so does the value of his own life increase in proportion—each man wants to protect his life in the face of inevitable loss. Hence these laws and prohibitions; sometimes they squeeze a man of great energy and spirit. “Therefore choose life.” Who needs to be told that? But if one life outrages another’s?

The trouble stems from this old combination, body and spirit … or material shell and airy inner substance. You crush a shell with your heel, the oyster dies, its gelatinous mass, deprived of its watery element, desiccates, becomes air. Where does the little wet, dark, private being—that which gave it its oysterness—where does it go? Did it get its being from the sea itself, does its tiny life ascendinto clouds and rain down again into the sea? Is there a finite number of oyster-spirits in our Cosmos? If so, perhaps man, too, or the number of men’s souls, is finite, reusable. You crush the life out of one, it springs up anew in the womb of some unsuspecting woman who carries her own little ocean within her belly. Out of the great seas, a tiny creature; out of the small seas, a noble man. Is not the underworld but the womb of the earth? Is this heresy against the gods?

Everything is begging to resemble everything else in this heat. The reeling white gulls, those black shapes above and all that lives under the sea are at home in their element, air or water. Only I am drowning in sunlight, inhaling the dusty earth, swimming in heat. Even this breeze is an inferno. So, I crushed the life out of Archilochus. What of that? Even now he is no doubt encased, fishlike, in some complacent belly. Cool, dark, floating. Soon he will be clinging to a marblewhite breast, sucking the sea like some oyster …

Only his name is real to me now and what is a name without a body to attach it to? A sound: ARCHI LO CHUS! I shout out the sound of you and the cliffs echo all that you now are: empty air.

And yet, in naming you the memory of your form begins again to palpitate. The desiccated oyster moistens and swells, about to receive the wound again, a new life begins, again, out of old flesh. There is no escape. I cannot murder you out of my memory, the shell of your name will be filled with your being, fixed now for all eternity in this endless cycle of fertilization, irritation, destruction … Memory condemns us, for I am out of time and nothing new will ever happen to me. In this perpetual union you live in the pulp of my mind; the shell of my skull also shelters you for how can I murder your name which has no substance?

My head swells in this heat on these white cliffs of undressed marble, my head swells and palpitates like the belly of a woman soon to give birth. I shall crush this shell as a seal cracks an oyster, here on these white rocks, and cast it into the sea, dive into the green depths after it and hide your name among the sea stones forever. You, paragon among men, are about to be no more, an abstraction, a forgotten idea.

Time reverses itself for the redemption of guilt. Kill another man and he lives for ever to haunt your exile. The seed-pearl of redemption lies in my ostracization. Strange, is it not, how sin is the irritant that creates wisdon, pearl without price. I can sharpen my wits upon paradox. I restore my rights. I destroy the man in whom the murdered one lives. Further obstruction of justice is thus impossible. I will not disagrace myself by going away without having done something.

Alison Armstrong’s book, The Joyce of Cooking, will be published mid-October by Station Hill Press. On the faculty of the Humanities Department at Cooper Union, her fiction has previously been published in BOMB and Exquisite Corpse.