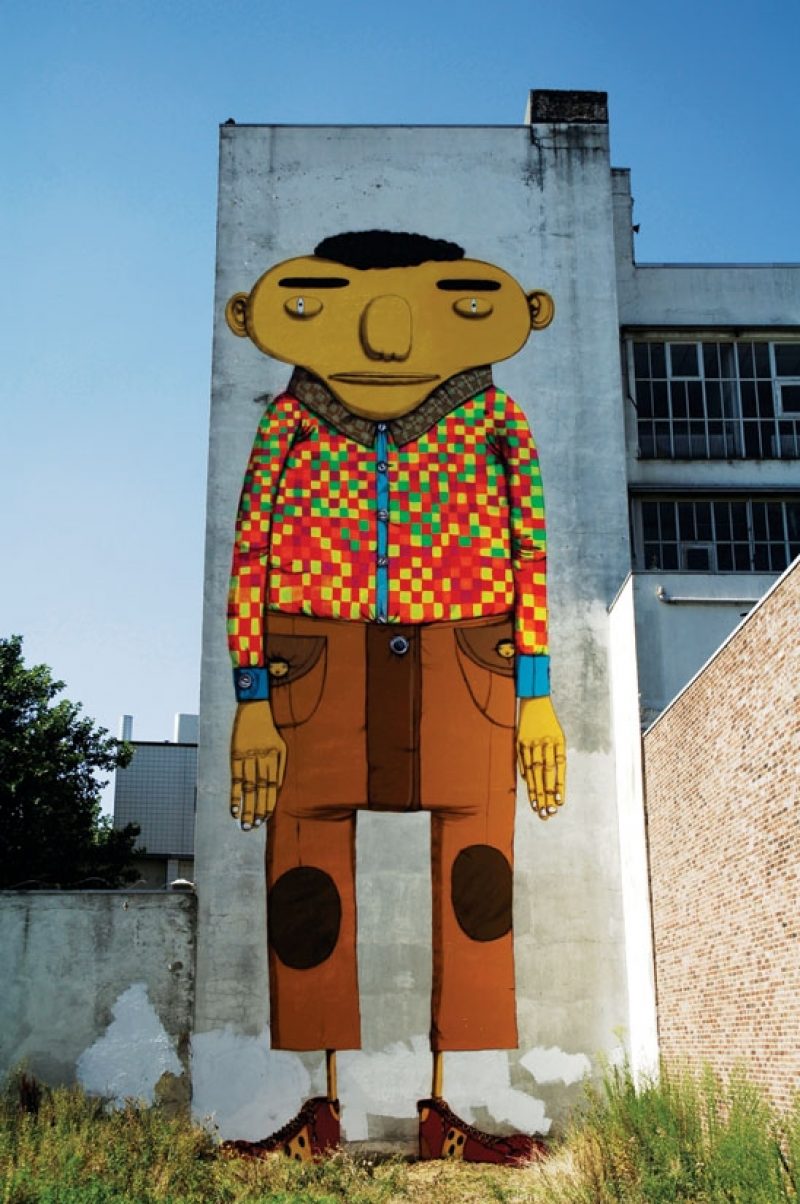 Otávio and Gustavo Pandolfo, aka Os Gêmeos, are identical twins whose work one might have come across without knowing it, on one’s hurried way somewhere else. This is not a hyperbole; graffiti and murals by Os Gêmeos exist around the globe: in their native São Paulo, Athens (where they created a mural for the 2004 Olympics), Berlin, Barcelona, Scotland, San Francisco, Los Angeles, Coney Island, and even Williamsburg. OsGemeos sidestep the trappings of street culture by not discriminating amongst indoor and outdoor walls. They’re as comfortable leaving their imprint on the streets as they are making paintings on wood and canvas to be shown in galleries, and cull their imagery as much from outsider art, Brazilian folklore, and global hip-hop culture, as from their own private mythology. Their multifaceted output, which includes sculptures and installations, makes all the sense in the world: theirs is an artistic practice times two. 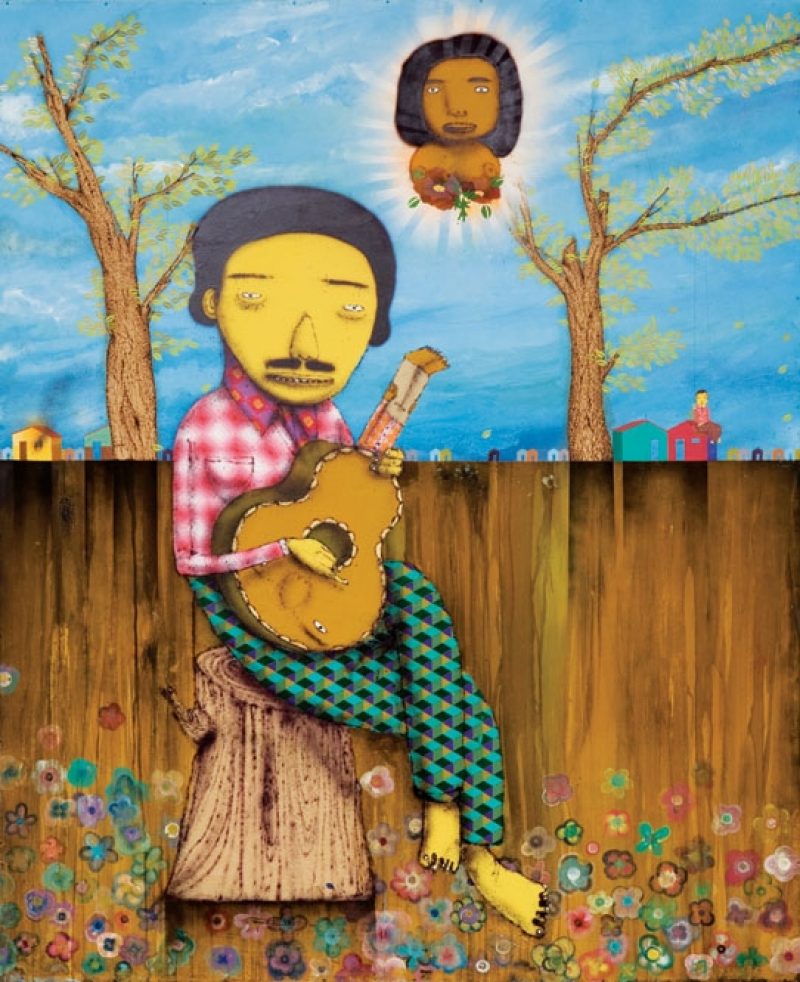 BOMB Did you study art? How did you begin making graffiti? Did a particular context incline you to intervene in public space; in other words, did you intend to engage in a form of social critique?

Os Gêmeos We had a formal education up to high school and began studying art on our own when we were five years old. It was the way we would amuse ourselves in the street, the way we would play outside. Everything was always very intense and vibrant. Using public space was our way of dialoguing, directly or indirectly, with other people. The mere act of interfering in public space already entailed a critique, changing something. No one had to tell us what to make or when and where to make it. It’s that old story, if you don’t use the street it will end up using you. In Brazil there are a lot of things that need to be said and exposed: there’s violence, corruption, lack of security. Very little is done to change things. It seems as if people in Brazil either accommodate themselves to reality, flee, or pretend not to see it. To intervene in public space was our way of speaking out. 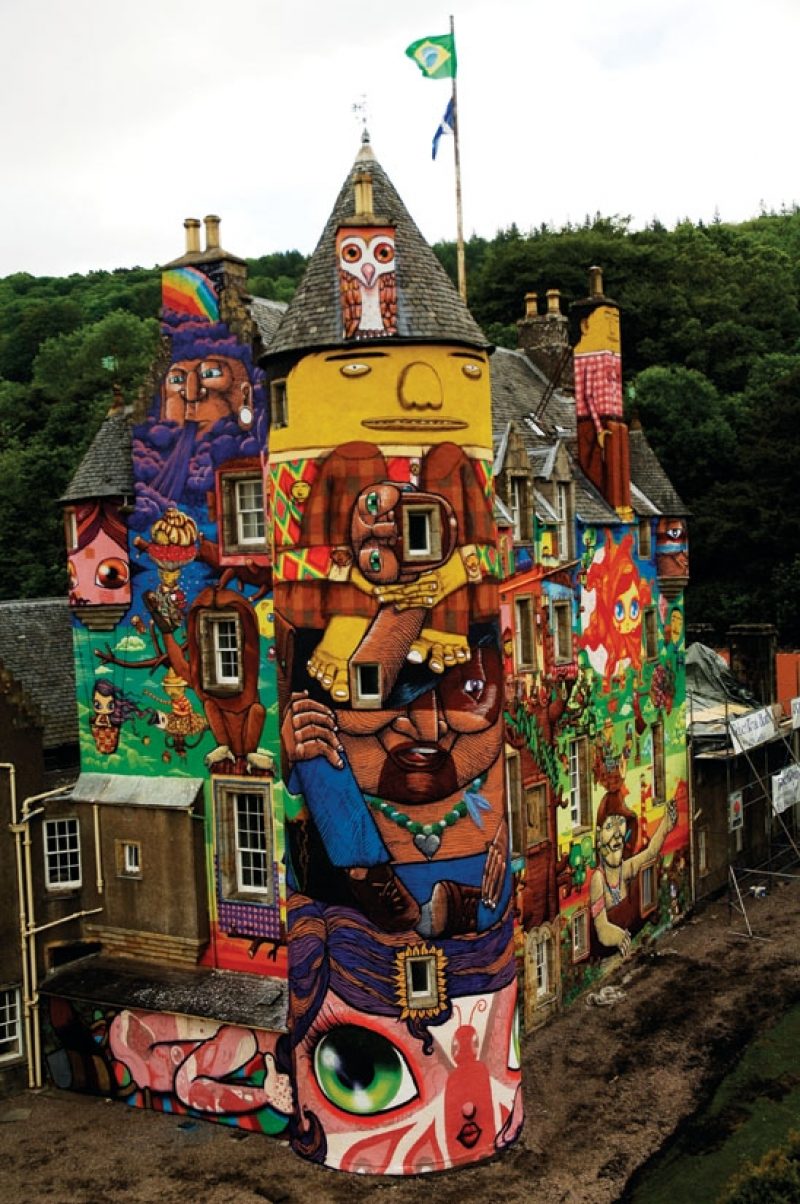 BOMB There is a great tradition of mural painting in all of Latin America. Can you tell us about the iconography you use, the representations of Brazilian folklore in your images? How did you arrive at your vision?

OG Brazil is a country that has not been totally discovered yet. Today it is still being plundered, used, sold. In the midst of thousands of problems, people learned to be happy, to accept certain conditions and reject others, to be radical with regard to some issues and keep quiet about others. Brazil is a hot-blooded country where, as they say, “one doesn’t need much to be happy.” In keeping with this way of life, we learned to improvise: a serious problem can turn into a joke, jokes can turn into problems. Ours is a country in which people have learned to do much with very little. To improvise is the best way to make art. South America thrives on improvisation. Brazil is a country of great miscegenation of peoples, races, beliefs, folklores, popular cultures, foods, et cetera. It’s as if there were many worlds within a larger world called Brazil. 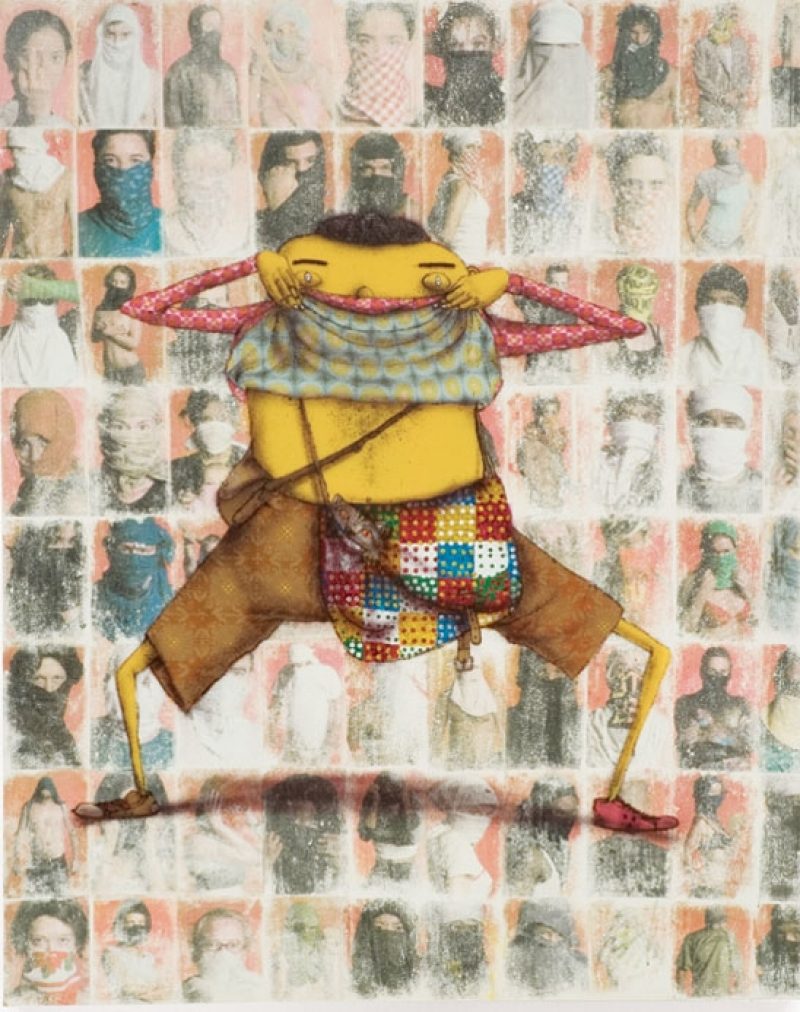 BOMB In many of your paintings, instead of finding the great heroic figures of traditional murals, we encounter rather diminished masculine figures. Why?

OG You know how before bedtime you open your diary and you write down what you did, how your day went, your thoughts, your wishes and sadnesses? You leave it on the pillow and fall asleep. The next day you decide to open your diary and show everything you’ve been feeling to your entire family, your friends, acquaintances, and strangers. Thankfully, every day that goes by is another day in that diary called life. We believe in the path we decided to follow. It’s as if we were living within a play 24 hours a day. 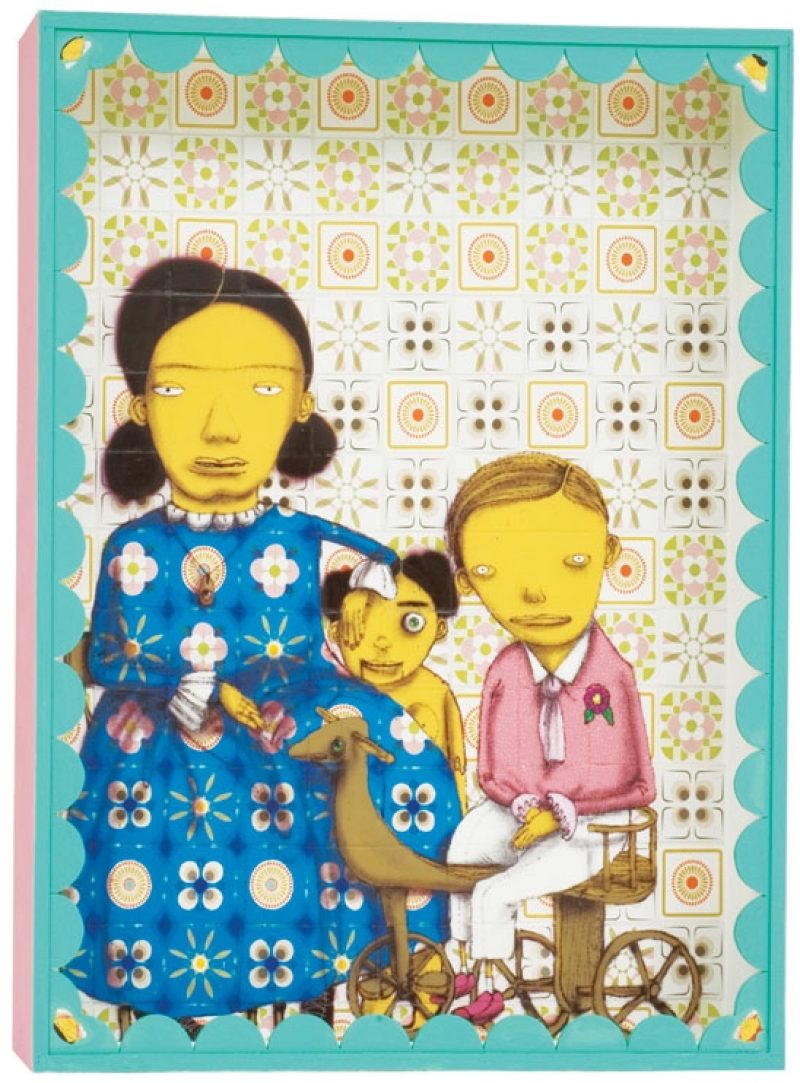 BOMB Do you read comics? Your images bring them to mind, although they also relate to vernacular culture.

OG We have thousands of influences. Every second of every hour of every day we’re presented with information: films, scents, tastes, et cetera, that inspire us. We’ll tell you a story: one day we were in our studio waiting to see some sort of light, and we saw, from the window, this light coming to us and getting nearer. My brother grabbed my hand and said, “Let’s go.” We opened the window and saw a path and knew we had to follow it fearlessly. When you actually believe you can fly, you’re able to fly! 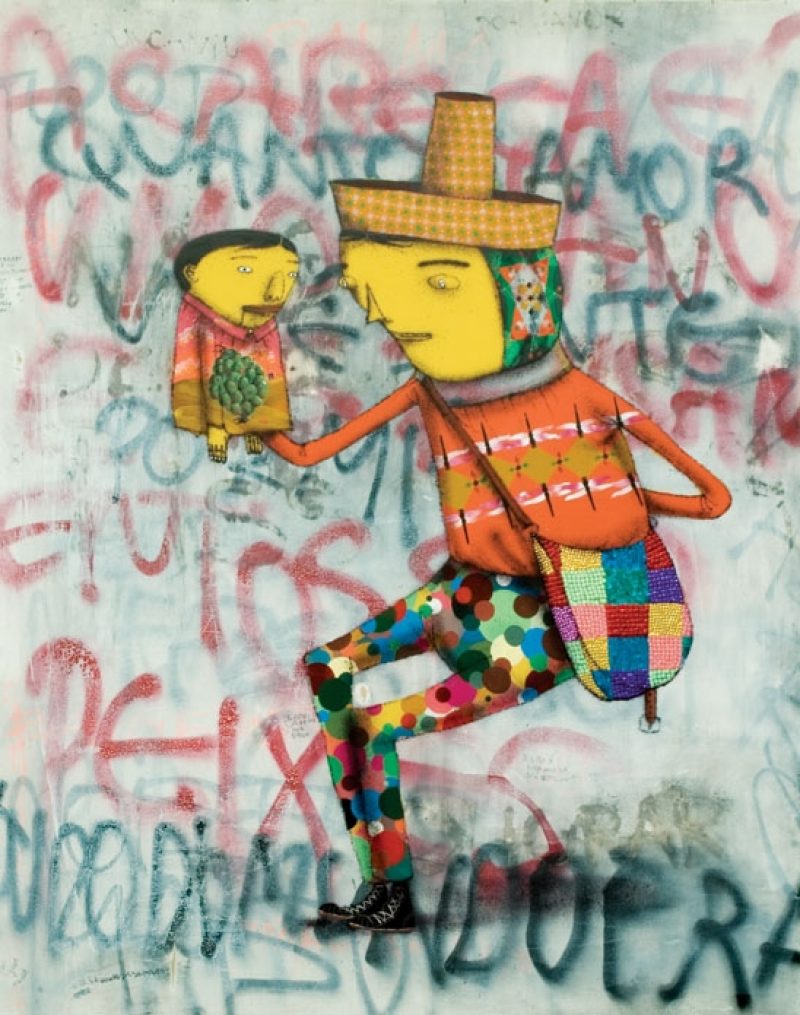 BOMB As Vik Muniz said about your work, through displacement, it challenges notions of what street and fine art mean. It seems to sprout from an intense interplay between high and popular culture as well as from a need to bridge perceptions of class, culture, and aesthetic value. You seem to be as comfortable in the street as in the commercial gallery circuit. Has there ever been any debate around your exhibiting actual paintings in galleries? Are you still making graffiti?

OG We’ve had the opportunity to learn, see, and reflect from both sides; we can arrive at our own conclusions. We’ve learned not to delude ourselves and others with eye candy—not to idolize our own art. We’ve learned to search for a balance in our production so that our work can participate in these two extremely different worlds. For a long time our graffiti was part of the urban scene and was always amidst people: poor, rich, happy, sad, distracted people. People passed by our paintings and sometimes noticed them but often did not. To enter the contemporary art scene was fun, maybe more so because our first show was with a US gallery, Deitch Projects in New York. A few years later we had our first show in São Paulo, at the Fortes Vilaça Gallery. People from all social classes visited our show. Kids came by. It was fun and good to be near and experience things closely, from a distance… .

We’re thrilled with everything that has happened to us. We know how to keep things separate. The universe of the street cannot be compared to that of the gallery in the least. It’s like a scale. We’ll give you an example: it’s like scuba diving without an oxygen tank. You dive into the water and find an entire universe waiting to be discovered, and a myriad of beautiful, mysterious, and dangerous things, but your body needs some oxygen so you rise to the surface and look up and encounter another beautiful, mysterious, and dangerous universe to be discovered. We have lots of ideas and things to say, and we’re gradually discovering different ways to express them. 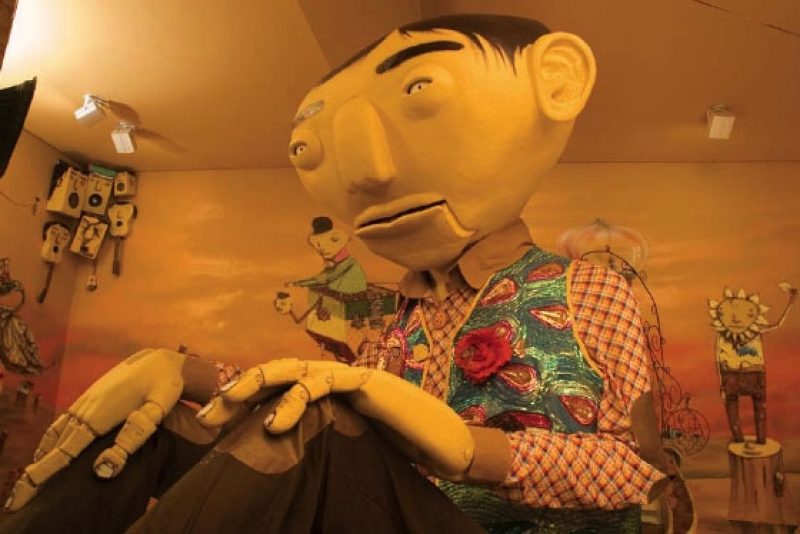 BOMB Vik observed that there is a perfect communion between the two of you. What do you each contribute to the creative process? Do you think differently? Did you ever want to work on your own?

OG We each have our privacy, sometimes our different tastes and ways of going about things, but when it comes to Os Gêmeos we’re a single person: We’ve created a parallel world and living in it, for us, is completely natural. We’re in synch 24 hours a day. 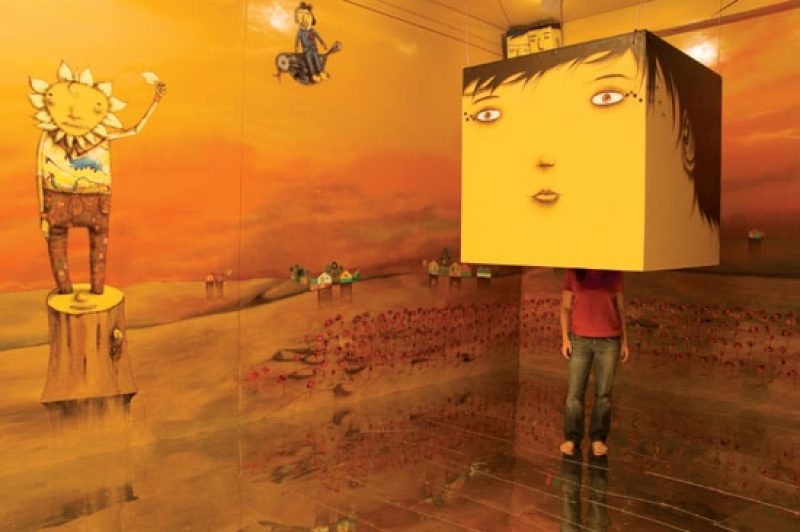 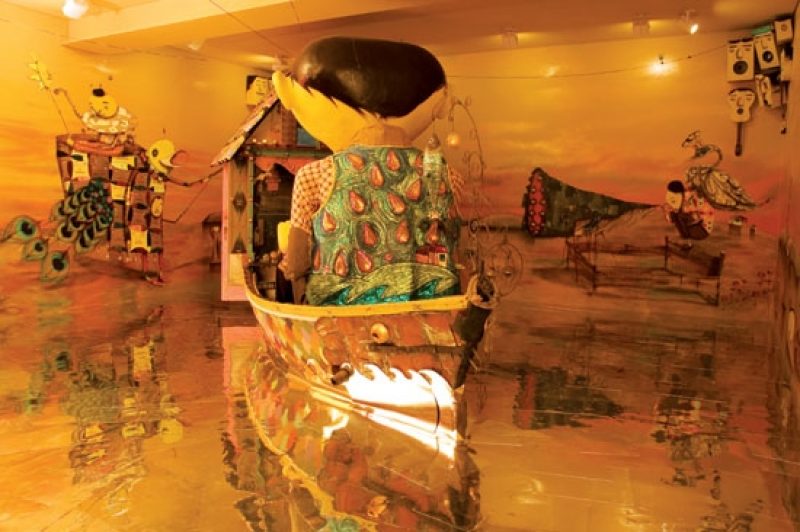