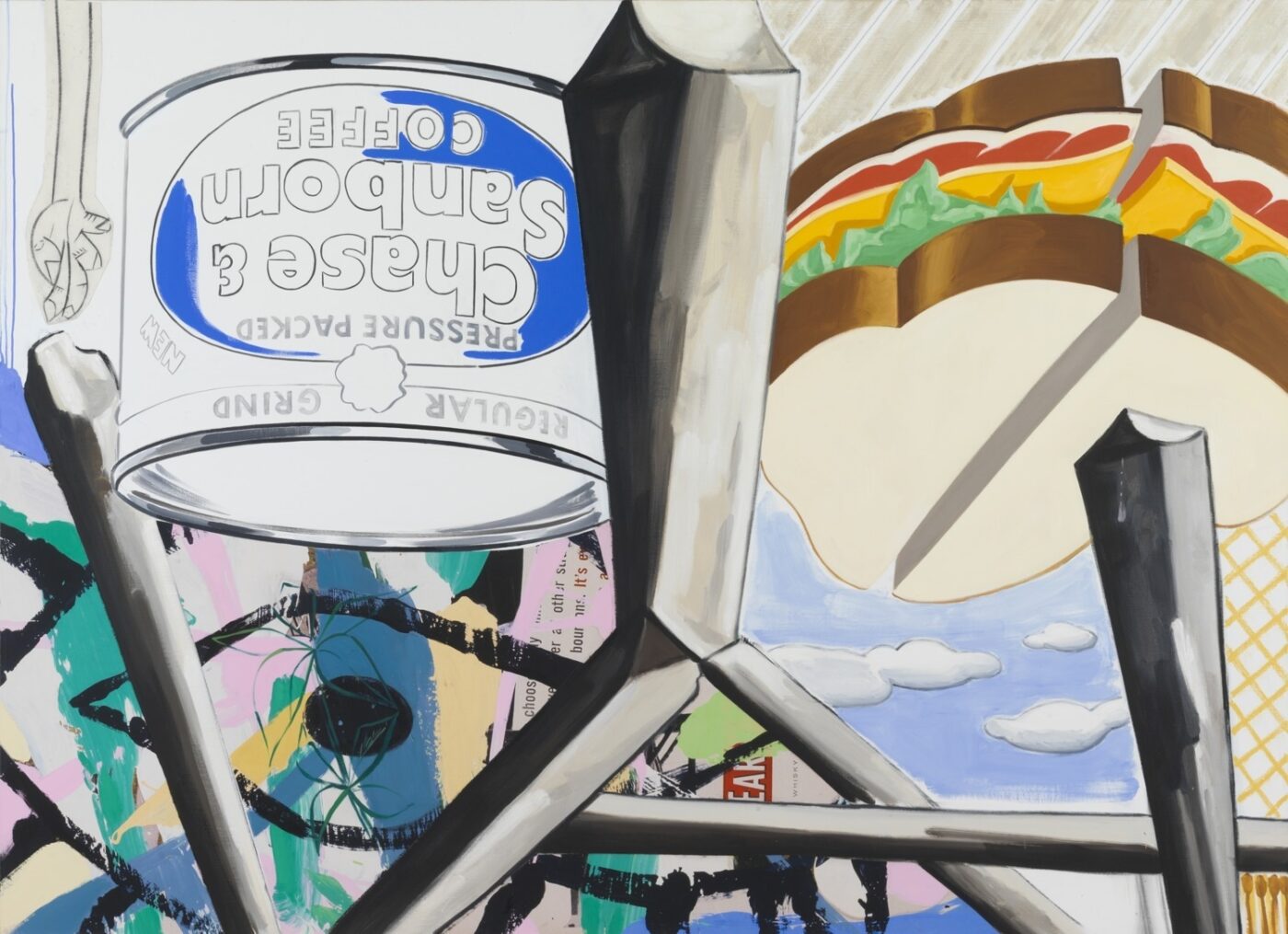 Old Bars (after M.H.) began as a little wager with myself. As everyone knows, putting two more or less equal masses on either side of a painting’s centerline is, compositionally speaking, instant death. I bet you can’t make a painting with that structure. So what the hell. The painting is saved from certain death by three upright forms, the stakes or staves, the old bars, which, in their original appearance, were part of a split rail fence edging the flinty coastal landscape of Gloucester, Mass., courtesy of Marsden Hartley. The three forms, along with the smaller diagonal “legs” and the horizontal post, are big, and assertive, and they solve a lot of problems, compositionally speaking that is. Thanks, Marsden, for the assist.

How the ham and cheese sandwich becomes, upside down and rakishly angled just above eye level, a flying saucer-sandwich in the sky.

How the painting manages to say open and airy even with the massive, darkly shaded old bars.

How the yellow-greenish-gold diagonal stripes in the upper right corner turn into the free-hand diagonal grid on the right edge below the sandwich, and how that further morphs into the overlay of dripping paint daubs at the very bottom right corner. Things turning into other things; matter taking different forms, like water turning to ice, or steam.

How creamy the warm beige bread appears against the blue sky below.

How the collaged element below the coffee can on the painting’s left half sneakily uses the same pattern repeated at two different scales.

How the painting of the coffee-can label is “un-finished.”

How jaunty, and buoyant the clouds appear, and also how they give enormous scale to the sandwich. Hey, that’s a really big sandwich!

How the painting has breadth as well as breath.

The painting is about these things: structure; open vs. closed space; descriptive vs. gestural marks; color, both color as it relates to structure and, as always, the intervals between colors.

On references, borrowed images, subtext, and history vs. nostalgia:

First of all, let’s retire the word appropriation. It no longer means anything. It’s true that the structure is provided, so to speak, by Marsden Hartley, by the dark, moody hunks of wood that I extracted from one of his paintings. Here they have been re-purposed, and exaggerated for effect. As part of my painting, the bars speak one kind of historical language. They evoke the pessimistic fatalism of early 20th-century Modernism. The sandwich and the coffee can, as painted images, speak an aesthetic language associated with the 1960s, a historical moment of, visually speaking, confidence and optimism. The unlikely meshing together of these two pictorial worlds gives the painting a texture, an associative complexity which does not need to be resolved, just taken in. Neither historical nor futuristic; this is our world. The painting has another “adapted quotation”, as I call it, in the upper left corner—a collaged charcoal drawing of a hand and arm, derived more or less from Uncle Picasso extends itself into the mix. As the three blackened bars thrust upwards, the elongated arm reaches down in counterpoint, almost but not quite touching one of the bars. In the elegant space between the cupped fingers and the tip of the wooden stake, the painting holds its breath.

David Salle’s Ham and Cheese and Other Paintings is on view at Skarstedt New York through October 28, 2017.

His work can be found in the collections of many of the world’s major museums, such as the Centre Georges Pompidou, the Los Angeles County Museum of Art, the Museum of Modern Art, the Stedelijk Museum, the Tate Modern, the Walker Art Center, the Guggenheim Museum, and the Whitney Museum of American Art. Salle is also a celebrated writer whose essays and reviews have been published in Artforum, T: The New York Times Style Magazine, Art in America, Modern Painters, and The Paris Review, as well as numerous exhibition catalogs and anthologies. A volume of Salle’s collected writing, How to See, was published by W.W. Norton in October 2016, and his memoir is forthcoming from that publisher soon.