tUnE-YaRdS released her BiRd-BrAiNs album in 2009 and has just released a new album titled whokill, a mix of freak folk, R&B and African that forms initially jarring, but ultimately beautiful, experimental collections. 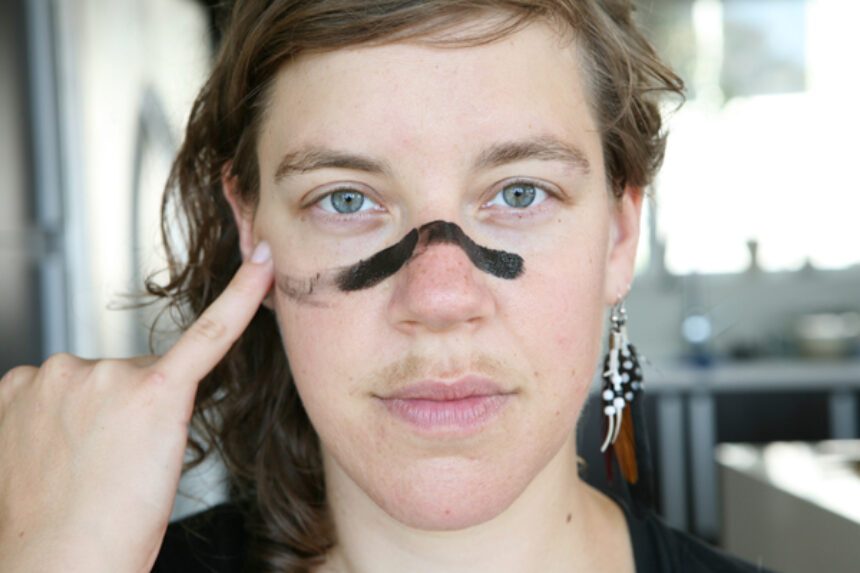 People tend to be skeptical about tUnE-YaRdS. After all, her moniker looks like a pre-teen’s AIM screenname. She loops and records her music on a voice recorder, and she beat boxes with a ukulele. The husky-toned hippie, born Merrill Garbus, released her BiRd-BrAiNs album and BiRd-DrOpPiNgS EP in 2009, a mix of freak folk, R&B and African that forms initially jarring, but ultimately beautiful, experimental collections. Some think maybe she’s too experimental, too weird to connect with. But Garbus faced the North American skeptics for over three months touring with Brooklyn-bred darlings Dirty Projectors and Spencer Krug side project Sunset Rubdown, winning crowds over one wail at a time. It all came to an end this past weekend, giving the songbird some much-needed rest. Her live shows are energy-packed, so it’s no wonder she’s exhausted. On one of her last shows of the Dirty Projectors tour, she faced the audience, zebra-striped shirt exposing her breasts and whimsical eye-liner crawling out of her left eye. A slight yodel trickled out of her mouth, slowly evolving into a booming screech as her eyes grew with a mix of ire and joy. She was possessed.

The music then prompted her to bang on her floor toms and stomp on her effects pedals, while bassist Nate Brenner—the only other human on stage with her—held down the rhythm. “Throw your money on the ground!” Garbus exalted demonically, exploding from the steady flow of the music, and the crowd responded with a burst of acceptance. Some yelled out words like “ridiculous” and “fucking insane,” fueling Garbus, who was both a child, smiling and prancing on stage during songs like “Hatari;” and a roaring sex-pot, breathing “Real Live Flesh” into the mic. Garbus’ voice has the personality of countless characters and animals. She sounds like birds, like Amazonians, like banshees, like a modern-day Joplin with Joplin pipes and Joplin flare. Unlike many other acts, her quality doesn’t get compromised during live sets. Instead, it becomes more raw than imagined. It becomes ridiculous and fucking insane.

But now the craziness is temporarily over—she has ten days total of normalcy—and Garbus can retreat to her nest in Merrillville (sometimes Montreal, sometimes the road, mostly her head) and play music on her floor boards, eat spicy tuna rolls (her breakfast of choice on the road), and work on some follow-up recordings. On a cross-country trek to California, a 14-hour solo drive Garbus described as a “rite of passage,” she discussed over the phone her confusing Montreal-via-Vermont-via-Connecticut living situation, growing up in a folk summer camp, and Japanese puppetry. All of this while chomping on some sushi.

Paola Capó-García I always read that you’re based in Vermont, but where are you actually from?

Merrill Garbus I grew up in Connecticut for the majority of my life. Connecticut was a hard place to grow up for me. Where I particularly grew up was very wealthy and my parents were not. The cultural things going on were country clubs and tennis matches and there wasn’t a whole lot of understanding that people could be different. The culture was going to Dave Matthews Band shows—which I did, I won’t deny that. I think I felt way more comfortable saying I was from Vermont and just attaching myself to that state, but recently I’ve just said, “I’m from Connecticut.”

PCG Where are you living now?

MG I have been living in Montreal for the past three years, but I lived in Vermont for four years after college. I worked for a theatre called Sandglass Theater based in Putney, Vermont. It specializes in Japanese style puppetry using a large doll, and it would often take three people to handle the puppet. It’s puppets for adults. It was a very strong schooling in the creation of a piece of art and that has affected the way I even compose a song.

PCG Would you do theater again?

MG I think the way that I perform is pretty theatrical. Theater can mean so many different things. If I pull [the audience] out of their comfort zone through a performance, I think that is theater. That comes from the theater’s tradition.

PCG What about musical tradition, does that come from your parents?

MG My parents are both musicians, and now my sister is too. We’re all musicians. It’s a definite tradition in our family.

PCG Do you ever perform together, family troupe style?

MG Specifically for my grandpa’s birthday, he’s now 92. That’s what unified us. It was really hard for me and my sister to admit we were what our parents were. As teenagers you never want to be what your parents are. It took us both a while to be comfortable enough so that we could go play together as a family. My sister and I both play the fiddle, old timey folk stuff that my dad taught us.

PCG When did you start singing the way that you do? I can’t quite imagine a five-year-old Merrill belting it out the way you do now.

MG I’ve sung my entire life. I really think that my voice is something that people talk about the most in terms of my music, but if you listen to recordings of me at 26, you’re like “Who is that?” It’s only been recently that I’ve been like, “Oh, this is my voice. I can really use it for all it’s worth.” That was being built my whole life and I didn’t know it. It takes a while to find your voice and I’m not even sure that I have yet. When you first start as a musician you start singing like other people. You’re not sure how you yourself sing. You’re just trying to emulate other people. I was simply emulating instead of deriving sound solely from myself.

PCG Do you remember your first encounters with creating music?

MG I grew up at a camp that was a camp for adults to go and play different kinds of folk music—which sounds sort of dorky but was truly amazing—and it exposed me to so many kinds of music. There was music all around us, sort of emulating what our parents were doing. And then there were teenage years of playing guitar for two days and writing angry songs to my parents. It wasn’t until my mom bought me a ukulele that I seriously spent time on the songs.

PCG Do you have a case of sense memory, of a specific song transporting you to a specific moment in your life?

MG I remember “Maggie May.” I listened to the oldies station a lot with my sister, I made tapes and I took my walkman when we went on a trip to Kentucky. I remember the mandolin at the end of that song, which is so dreamy, and as a 10-year-old I just remember having that sort of warm tingly feeling all over being in the back of my parent’s car and loving life. That song brings me back to that very specific moment.

PCG How do you go about writing your lyrics?

MG For BiRd-BrAiNs I just sat with my ukulele playing to myself in what was a soul shooting process. With a song like “Little Tiger,” a lot of that was feeling deep-seated guilt of being from the Western world when I spent time in Africa. It’s different for every song. But it’s that sense that I do not understand and that I’m attempting to. To find a process that makes living my life every day easier or more pleasurable.

PCG The way you create music is unique, by looping and layering and using household items. Go through the steps of creating a tUnE-YaRdS song.

MG I don’t think I used looping pedals for the recordings. Those came out of the need after I recorded the songs to figure out a way to perform them. I would compose the song usually on ukulele. The structure of the song would already be there, the melody would already be there, but when I sat down to record, I would have this palette. I had gone around capturing sounds during my days doing my other jobs and living my other life. Sometimes I would stomp the floor and that would be the kick drum. I eventually did start using drums, and I would sample those through the voice recorder. I would say I needed a snare drum, and I had these boards and I would slap the boards together. I just had this way of instantaneously capturing live sound of where I was geographically. That would become an instrument. I would come up with drums and loops that I liked and would cut and copy and paste. I was essentially programming a drum beat. Everything else is on top of that and would still go straight back to the voice recorder and that was my method of putting things digitally into the computer. Sometimes I would go into my car, drive it somewhere remote, and do the lead vocals in my car listening to the instrumental recording on my Walkman. It’s so weird even trying to explain it, because when I try I start to go over the history of it—and it’s insane. Every song has its own past.

PCG How long did it take you to record your first album, BiRd-BrAiNs?

MG From the time I started the first song, it was two years, but the majority of it I did in two weeks. I had these three songs that were demos for a long time and I was trying to use them to create interest in the project and really no one cared. Everyone ignored me or probably laughed at me. But I realized I really wanted to complete an album, so I gave myself two weeks.

PCG Some of the songs you’ve been performing on the road aren’t on the album or EP. Are they sneak peeks of something upcoming?

MG Definitely. The question is how to record them. I can’t go back to that voice recorder way, because my brain was wanting to record faster than that medium would allow. But as soon as I recuperate from the past couple of months, that’s the plan.

PCG You must be exhausted.

MG I’ve been on the road since September 1. And now it’s what? November…Oh my god, it’s December! I have to go home!

Listen to tUnE-YaRdS on MySpace.