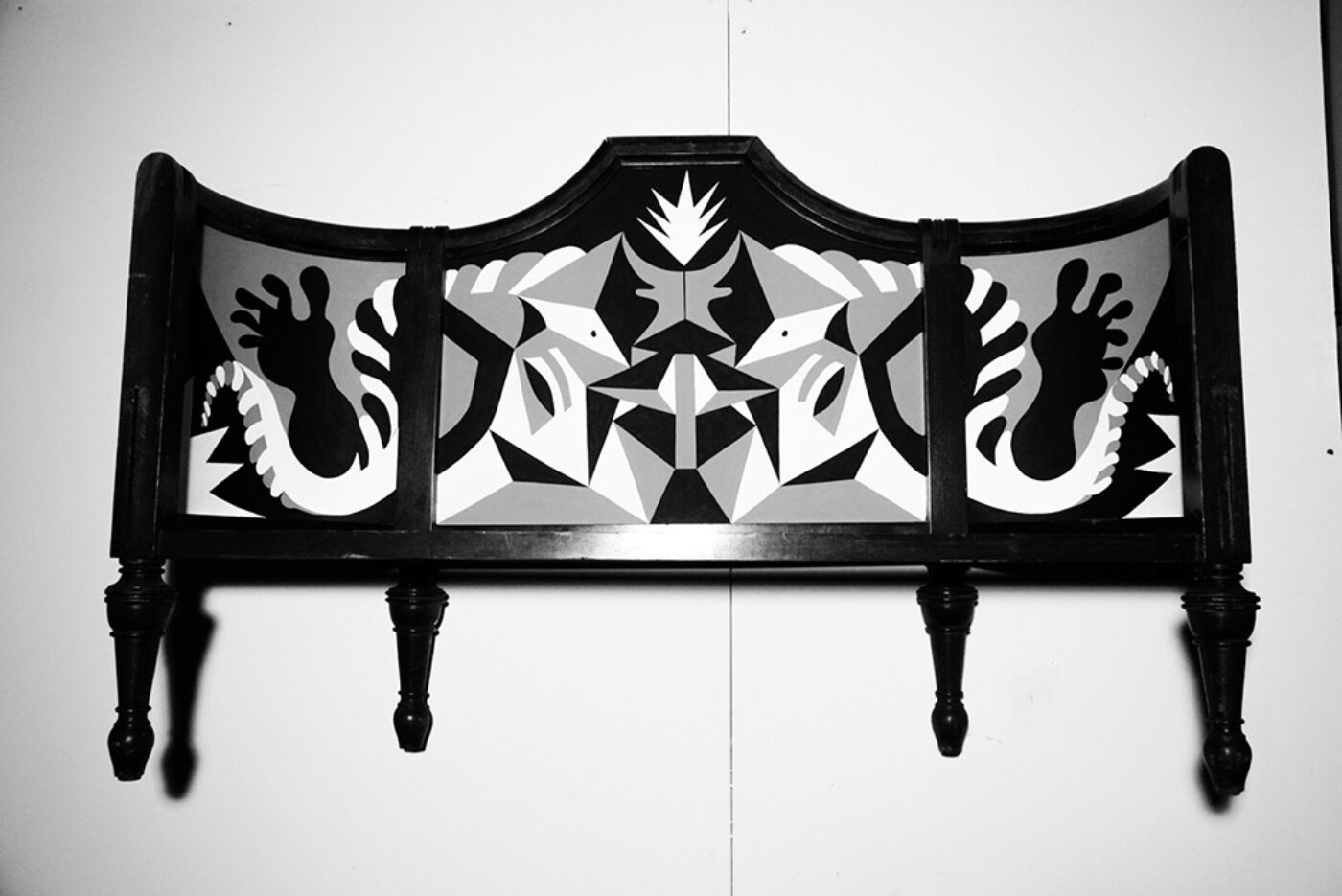 Visual artist Ryan Bock has created a world of darkness, populated with strange characters, enigmatic architectures, and a perpetual twilight that are reminders of reality while operating within the realms of the fantastical and eerie. If the artwork is the portal into the world of Bock’s creation, then the artist is the oracle, beckoning us to examine the cryptic and veiled labyrinth we experience over the course of our lives. Bock’s world is painted in black, white, and gray, and its shapes and gestures bloom from Czech Cubism and German Expressionism. Perhaps more important, however, are elements of the work that are overwhelmingly felt but whose cause cannot be pinpointed. In the case of his newest body of work, inspired by the landmark 1920 horror film The Cabinet of Dr. Caligari, I experience an atmospheric melancholy that arises from my own associations with memory, story, sorrow, and solitude. What is so devastatingly beautiful about his current exhibition is how personally the work speaks to each viewer. As the title Somnambulist suggests, Bock’s work is the stuff of dreams, creating a multitude of experiences that can be relayed but not relived, communicated but never re-created.

Naomi Falk How did the character Cesare’s portrayal in the film The Cabinet of Dr. Caligari serve as inspiration for Somnambulist?

Ryan Bock For me, Cesare is an everyperson. We all sleep, so he could be you or me, which is what makes The Cabinet of Dr. Caligari scary. Sleep is our most vulnerable state, both physically and mentally, during which we could be susceptible to things and not even know. More personally, I see Cesare as an artist like myself. Caligari claims Cesare can see into the past and future in his sleeplike trance, but any prophecy Cesare has is manifested by his own hands, even if his actions are being controlled remotely by Caligari. We never find out if he can really see into the future or not. That could probably be my new artist statement.

NF What else is it about his exploitation and lack of control that resonates with you?

RB I think we’re all exploited in some fashion, some of us more than others, not necessarily always by an individual but by our environments. By society as a whole. I feel like artists and entertainers have always struggled with these issues. Look at the Renaissance, considered an artistic highpoint, right? There’s a reason all the artwork is Christian. The Catholic Church was the only institution with the capital to spend on art. They controlled the entire narrative at this time. It’s like when the CIA funded Jackson Pollock, using modern art as leverage against the Soviets during the Cold War. There’s a reason why certain things boom in culture when they do. Some exterior force is controlling the narrative of artistic output and ensuring success or failure.

NF When we think about dreams, we are oftentimes referring not to nightmares, although by definition a nightmare is a subcategory of the term “dream.” Why do you think we’ve come to single out nightmares yet lack categorizations for dreams that bring us great pleasure, etc.?

RB Is this a sexy dream question already? I think we do have categories for other types of dreams. Maybe people are just more prone to remembering what scares them. 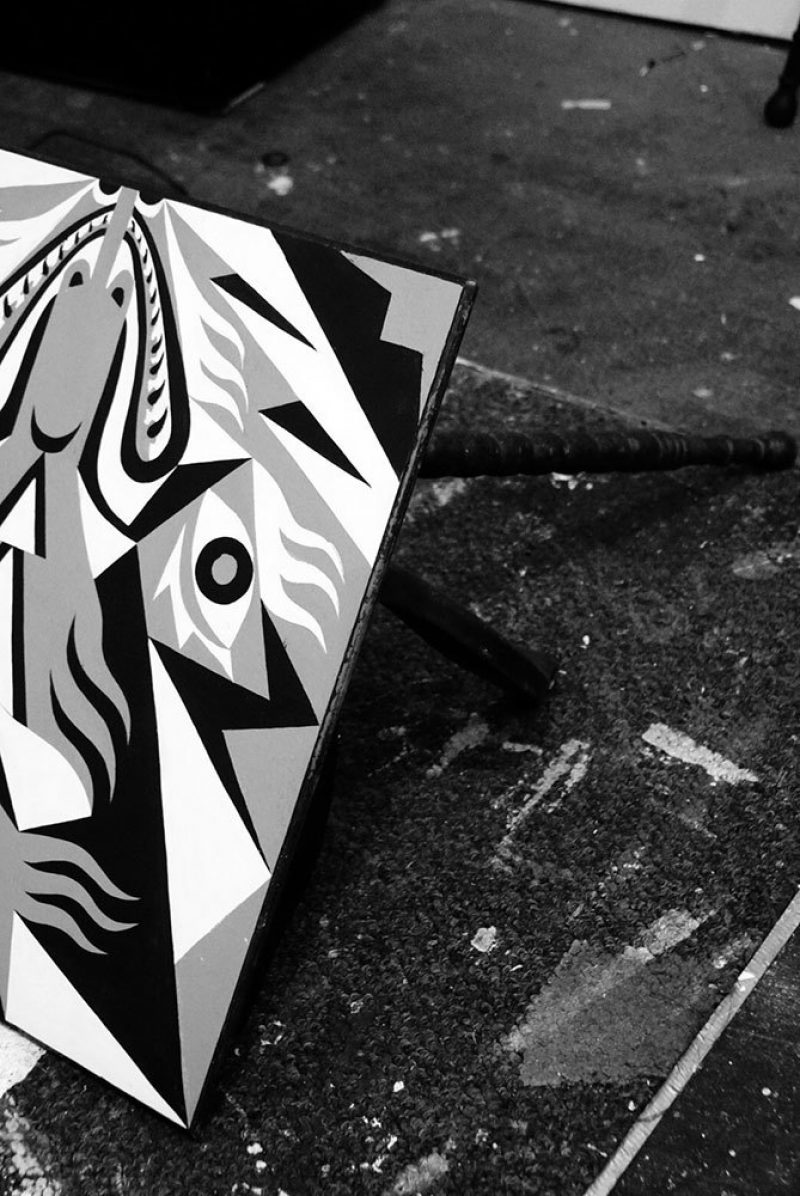 NF So you think it is the horror-esque element of your work that tends to resonate with people?

RB There have been situations where I’ve benefited from this directly. I connected with Juxtapoz Mag when one of the guys apparently dreamt he was being dragged into the colosseum by one of my shadow figures. He contacted someone I was working with at the time, told her about the dream, and then proceeded to invite me to Miami to participate in the Juxtapoz Clubhouse during Art Basel Miami.

NF In a similar vein, why is your work almost always preoccupied with narratives that are nightmarish? What is it about your view of the world that you hope to communicate?

RB I guess my view is that the world is preoccupied with nightmares, not me. I’m just a reflection of the times I live in. I’m here to report, not to provide anyone with a false, idealized version of the world. In terms of what I’m trying to communicate: I hope that it’s hopeful. I hope that there is hope. I’m hoping along.

NF This exhibition has been brewing for quite some time. What is it about this point in your life that has prompted its fruition?

RB Hmm, well, I have an intangible list. I keep all my ideas until they ripen. It’s an art knowing when to use which idea. I’ve been collecting bed boards off the streets of Brooklyn since 2014, with the vague idea of creating this body of work. During the past year I hit the jackpot in rural Kentucky during my residency at Boyd Station. There was an old, dusty farmhouse filled with antique furniture. The real stuff. The owner was generous enough to donate the majority of furniture in the exhibition, as well as provide a space to work. It was the perfect catalyst. I wouldn’t have had space to see all the bed frames together otherwise, to observe the dialogue between them. Now I no longer have room for anything else in my life, literally. So time to push this out.

NF Bed frames are just some of the found objects you’ve collected over the years. How do you think your daily experience of the world is shaped by your tendency to always be working?

RB (laughter) It’s true. It’s not something I can turn off. I archive and collect stuff off the street as you can see on my Instagram. You know how rare it is to see something somewhere and not be able to recognize what it is? It’s such a particular feeling. I live for these moments. An undiscovered shape or a chance pattern. An object so specifically designed for its intended function you couldn’t even fathom what it is or how it works. I think of how people used to draw sea creatures on maps. They’d see thirty percent of a dolphin and just make up the rest, like, It probably looks like this, for sure. I’m always looking for something new in my environment to spark inspiration. 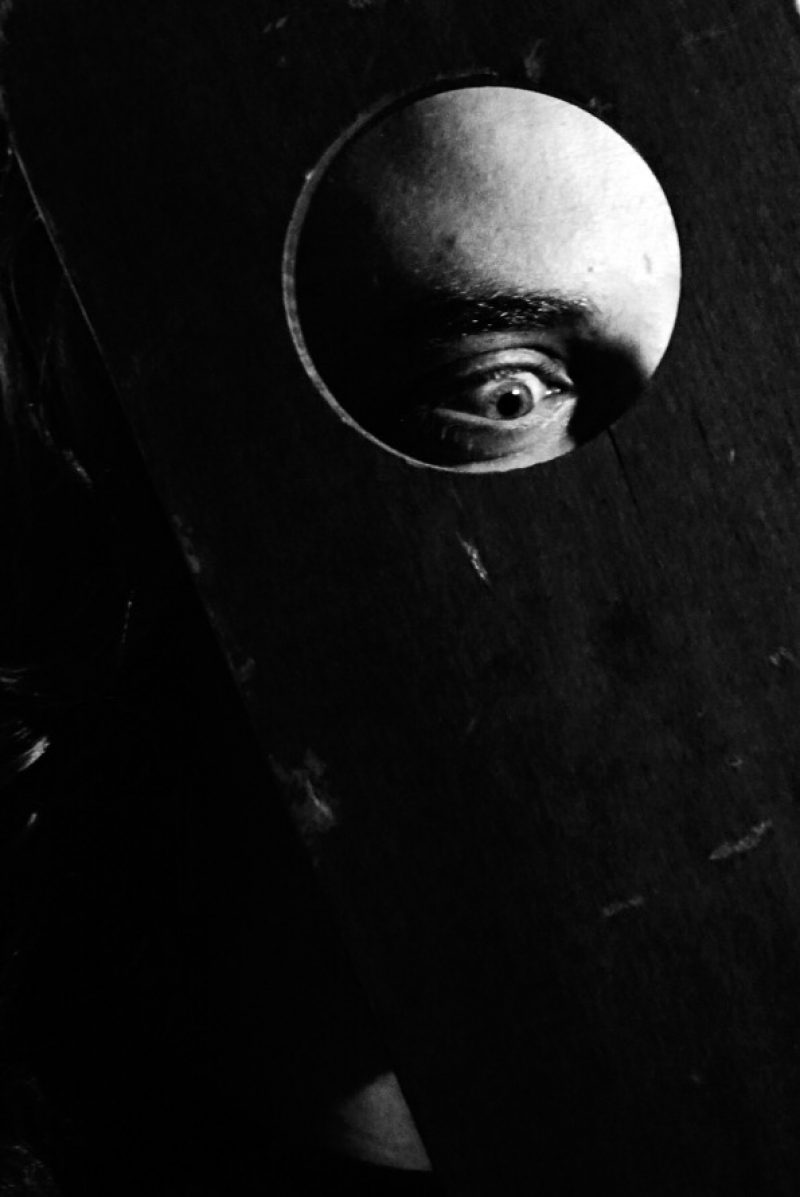 NF This fixation on the materiality of objects certainly plays into the shape-shifting quality of images in your work.

RB Yes, I love to draw attention to material, particularly in my animation and film. Artists can fall into a pitfall exerting so much energy to create an illusion to mask how something was created. For me it’s more interesting to see the elements that make up the larger image. Much of my imagery is generated from what is already present. In some cases I’ve repeated the ornamental design of these bed frames within the paintings on their surfaces.

NF This is your first time integrating Surrealist theory into a body of work.

RB Surrealism has this preconceived disposition toward illusion that I like, but I shy away from when it comes to actual, technical painting. For me, it’s more the materials in this body of work that lend themselves toward Surrealism—the found objects, things you would see and use in your day-to-day. I want to make functional objects nonfunctional, or make them function in unintended and impractical ways, so that the familiar becomes unfamiliar and strange. Dreams work the same way. We always recognize elements of our real lives in dreams no matter how strange, whether they be locations, characters, or scenarios. 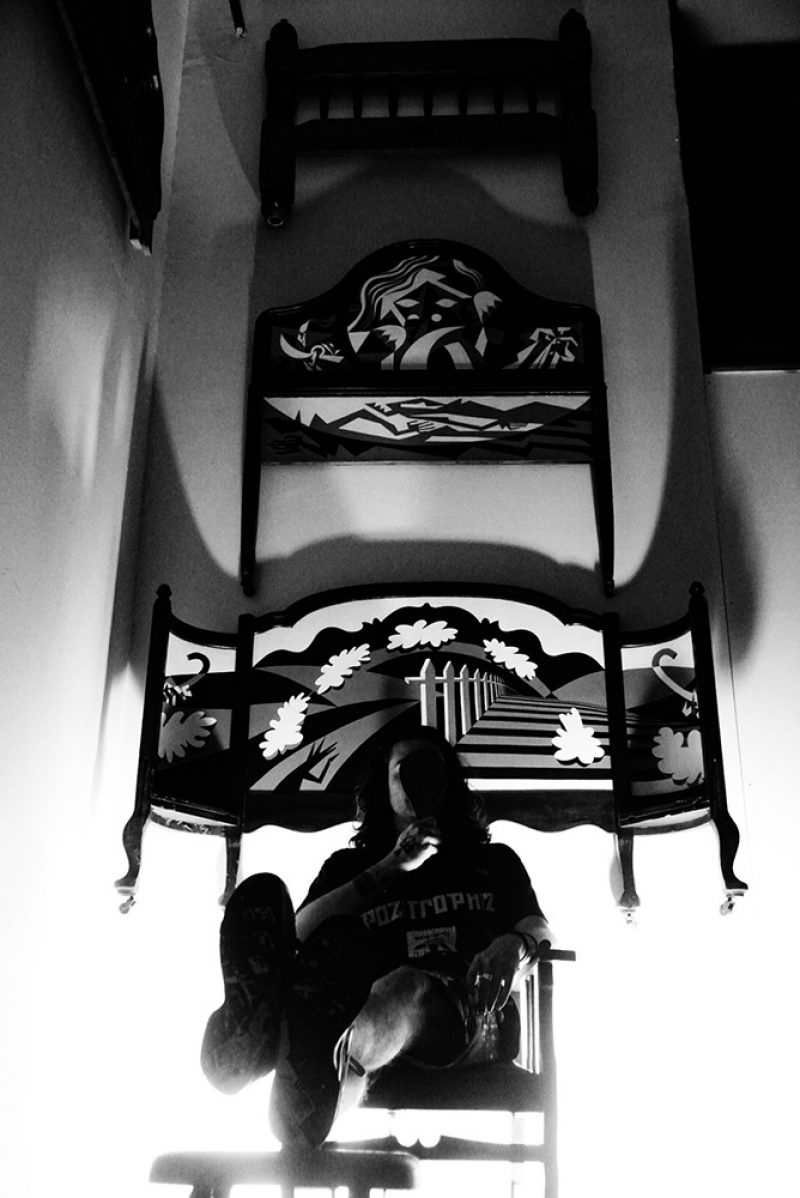 NF There are tiny moments in time when our dreams manifest in reality, such as when we wake up crying from a dream or when we fall asleep thinking about something and immediately dream of it. How do you think the content of your work is informed by your dreams and vice versa?

RB I shied away somewhat from representing my personal dreams, though obviously it’s impossible for some elements not to soak in. I have experienced very vivid, very frightening dreams myself, often times recurring. I’ve had sleep paralysis and felt a presence in the room with me multiple times, even felt someone touch me. I conducted a survey on Instagram and had overwhelming responses, which enabled me to identify patterns, images, or types of dreams that multiple people experience. I wanted to highlight that. From there, I read about how people through the ages have justified these experiences. The images in Somnambulist are an amalgamation of this research I’ve done.

NF So now you’ve tapped into your own elusive subconscious.

RB The nature of the beast seems unknowable to me. Maybe that’s for the best. I had a professor in college who had a favorite quote in relation to humor. I can’t remember it exactly, but it was something like, Humor is like a frog. You can dissect it, but the frog will die.

Ryan Bock Somnambulist is on view at Ki Smith Gallery in New York City until November 23.

Naomi Falk is a writer and editor who lives in Brooklyn. She works at the Museum of Modern Art and is co-founder of NAUSIKÂE NYC.