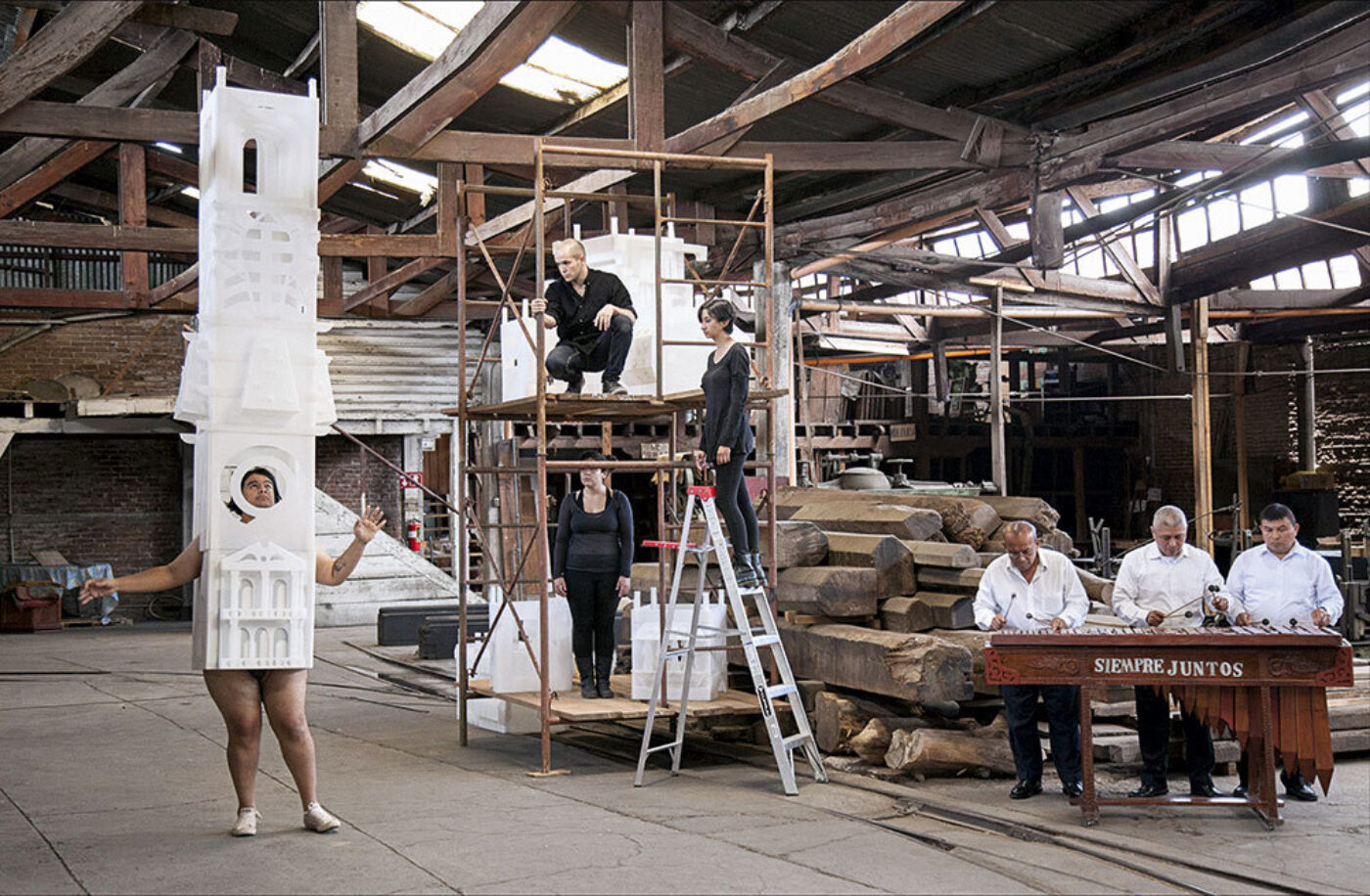 To write about Naufus Ramírez-Figueroa is a difficult task. I know him but know little about him. We met for the first time in Guatemala City in 2004. I can’t remember how or why—only that one day he came to my house in Zone 3, a working-class neighborhood where a bunch of wild artists used to live. Those were sour days. Aníbal López lived across the street. He already was a successful artist traveling around the world, and while I considered myself an artist, I passed my time between an advertising agency and a dive bar. Just like that, one day, Naufus came to my door. His appearance surprised me. He must have had the same reaction. We were exact opposites. I, scrawny and short, almost Lilliputian. He, immense both physically and in heart. We spoke a little bit and he showed me some of his works. One of them, I recall, left me stunned: a performance in which you see him at a market selecting carrots with which he later sodomizes himself. What stands out the most about his early works are their colors—super bright and in the foreground. In fact, color is present throughout his entire work, transforming and transmuting everything, ushering the passage of reality to a dream world, and of dreams to fire. It is there in his sculpture Props for Eréndira, shown in the 2014 Gwangju Biennale, or in Illusion of Matter (2015), his recent performance at the Tate, or in God Save the Queen (2010), that classic video of his in which he’s made up as the Queen of England, dancing in a lovely pastel green dress.

I stopped seeing him. Then came a fire that changed him. I’m sure it did, although we never really spoke about it. Not only did his videos, drawings, watercolors, and archives burn, the blaze in Vancouver also consumed a part of his life, his past. He left behind his years of exile in Mexico and Canada, his memories of a convulsed era in Guatemala. His work, once the fire died, was never the same. It grew, just like flames do. To say that from the ashes emerged a phoenix would be corny, even ridiculous, and yet there’d be some truth to it. 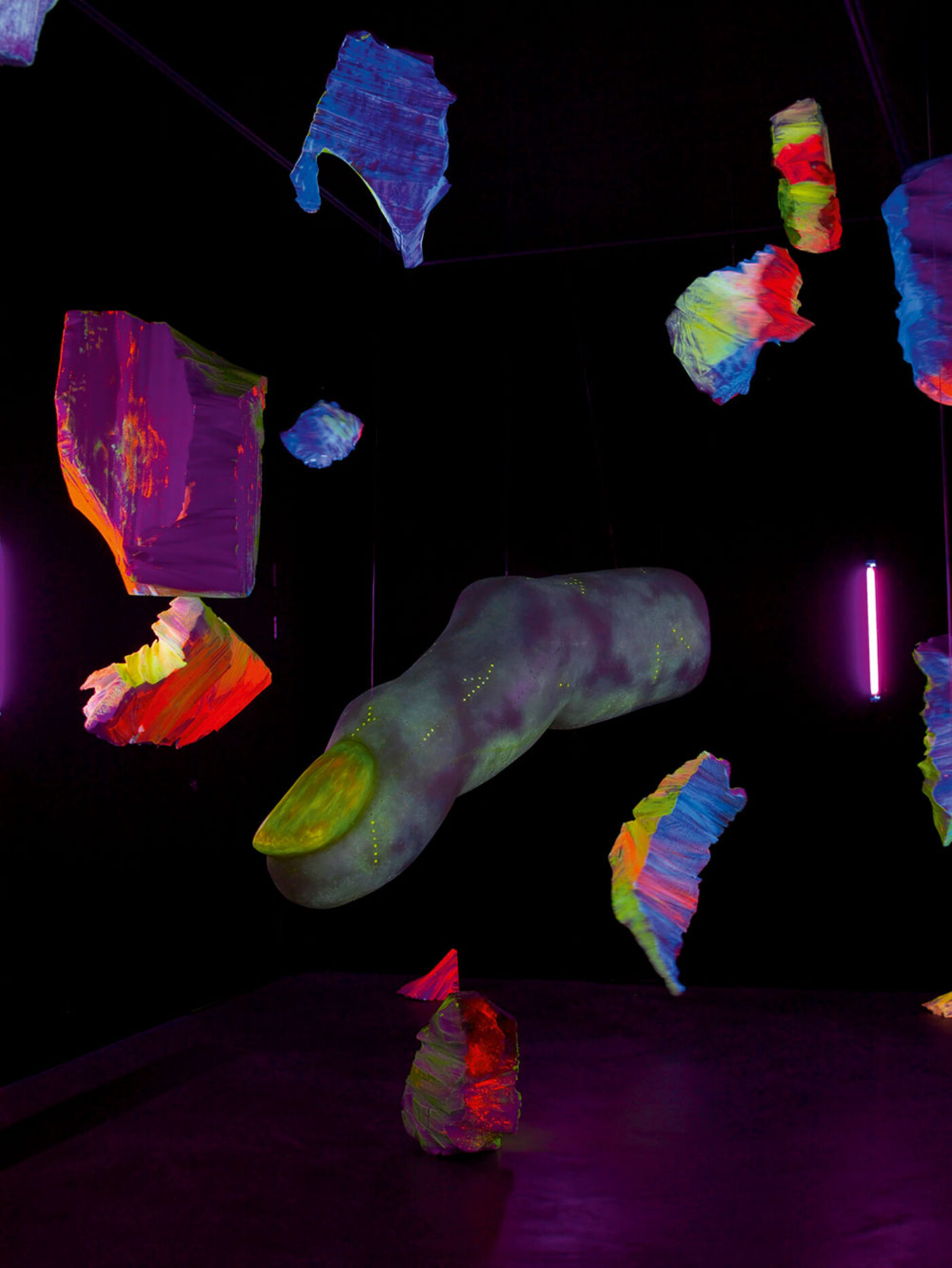 My favorite work of his is the performance Feather Piece (2013), in which he inserts black feathers into his left arm. I have to admit, though, that I like all of his work, or almost all—because it’s puzzling and weird, because it challenges me. Because the polystyrene covering Naufus’s hands and head takes on beautifully perverse shapes. Because his etchings are too good. Because his work has an intriguing dark side but also formal precision. His performance A Brief History of Architecture in Guatemala (2010–13) is proof. The cardboard sculptures in it are perfect, as is the rhythm and pacing of the marimba and the characters’ cadenced dance turning irony to shreds.

I wouldn’t dare say that Naufus’s work is the color of the tropics because he simply doesn’t fit in any preconceived notion. Naufus is Naufus, and he’s huge. He is a rainbow ranging from electric carrot orange to the most melancholic shades of blue. He is luminous and dark. There is something about him I can’t wrap my mind around, and I love him.

Translated from the Spanish by Camino Detorrela.

Regina José Galindo is a performance artist who lives and works in Guatemala City. Her work has been widely exhibited in solo and group exhibitions including Estoy Viva at Padiglione d’Arte Contemporanea in Milan in 2014 and the 49th, 51st, 53rd, and 54th Venice Biennales. Her work is on view in the monographic exhibition Mechanisms of Power at the Frankfurter Kunstverein through April 17, 2016. 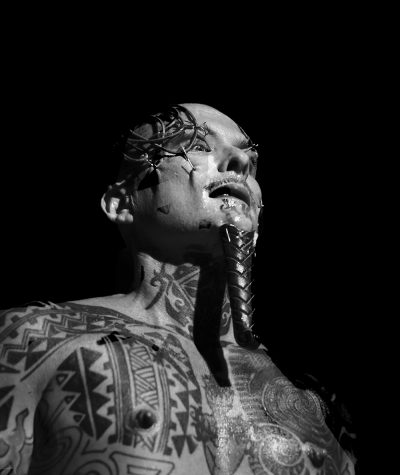 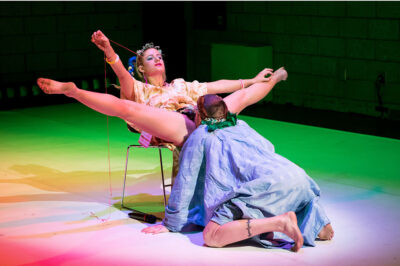 I remember Florentina Holzinger’s first costume. It was an oversize, orange-dyed dress, a muumuu really. She was sitting in a chair center stage. A minute or so earlier, a high fan kick had revealed her lack of underwear. 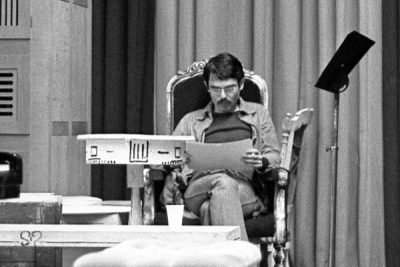 One of Mexico’s most important conceptual artists, Ulises Carrión, is also one of the most overlooked. BOMB Senior Editor Mónica de la Torre is moved to child-speak over poems that might seem gibberish, but are instead Cage-like koans.