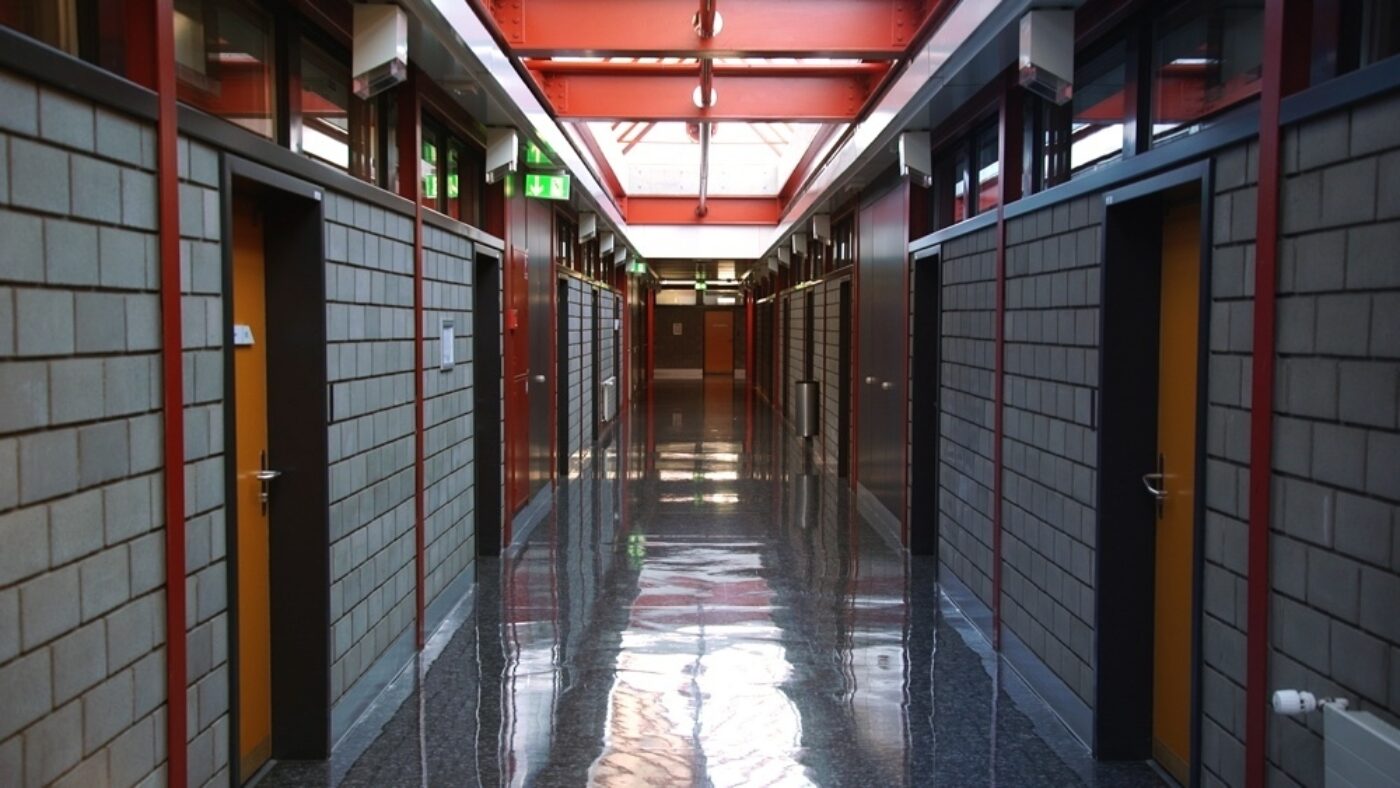 As extralegal repositories for untold amounts of priceless art, freeports operate at the center of the art market and, due to their extreme discretion, somewhat outside of it. Braden King’s short film, premiering here at BOMB, explores the social and capitalist underpinnings to these spaces. Produced by Field of Vision, a documentary unit co-created by Laura Poitras, AJ Schnack, and Charlotte Cook.

Keller Easterling One of the striking things about your film is the way in which it contrasts the lubricated movements of free zones against the stalled movements of migration. The world works very hard to make sure that billions of products and millions of cheap laborers and tourists can move around in zones and international waters. And since a lot of these spaces are also offshore tax havens, or—like we see in your film— places for storing art “bullion,” we are also making sure that a lot of hidden wealth can move around in them. These movements are streamlined and engineered, and yet somehow we have no way of moving x million people away from atrocities in Syria. That is a problem that just can’t be solved. A lot of strenuous legal work has been done to facilitate commerce, but somehow no meaningful ingenuity is applied to the other problem. And for me, your film makes that so clear. There it was, in a kind of slow-motion.

So few people know about this zone phenomenon. Free zones are somehow the most pervasive global formula for making urban space that no one has ever heard of. Even more obscure are these zones for the storage of works of art that we find your film. Hito [Steyerl] wrote the essay “Duty Free Art”, and your film has found even more ways to expose the form.

Braden King I definitely became fascinated by the idea of these literal and metaphorical structures. You know, both the building itself and the legal architectures and frameworks that enable the things that you’re talking about. But finding a way of getting at that—in a condensed way—was extremely difficult at first.

There are any number of rabbit holes one could go down: you could make a feature film about the way art is traded in these freeports, or how offshore tax havens work, or you could interview someone like the infamous art dealer Yves Bouvier. But what I was trying to interrogate initially was the fascination I had with these extraterritorial territories. These legally sanctioned non-legal areas, or these state-defined non-state areas. The paradoxes were completely fascinating to me. 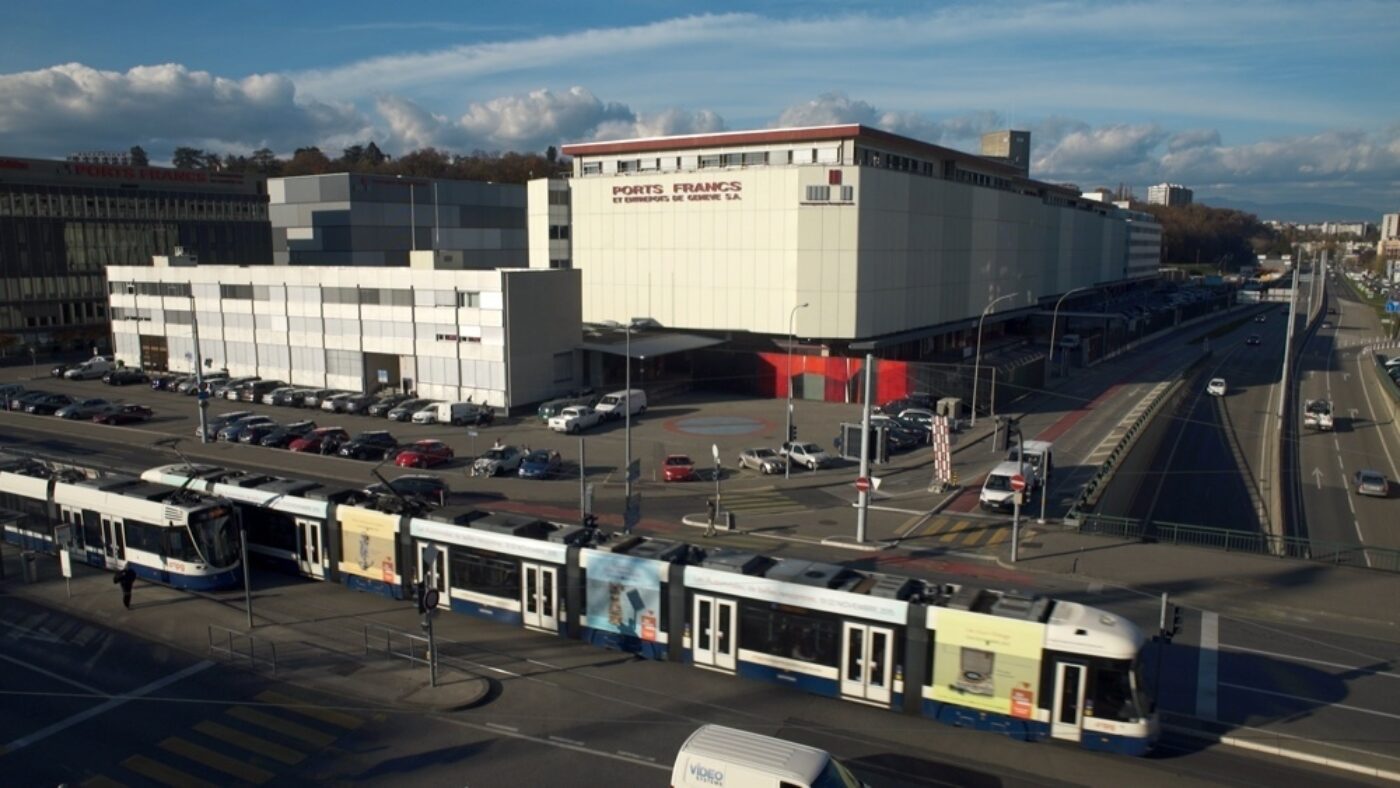 After a while, I started to think, maybe this is actually the dream state of the state. Maybe there need to be these areas that don’t fit into the logical waking life of the state, or a federation like the European Union—or of the United States, for that matter—maybe they’re just necessary for the state to survive in the same way that we have a biological need to sleep and dream in order to maintain our sanity. I was very excited about these ideas, but I also found them difficult to translate into a film.

A major breakthrough occurred when Gilles Labarthe—the journalist who’s interviewed in the film—we were driving around Geneva and looking the various Freeport buildings. And then he showed us the annex over at the airport and said, “Oh, I should show you this other place where I worked. It’s just over there—”

BK Yes. The Red Cross story. At the time I was just completely blown away by the fact that these two structures—one for goods and one for people—existed in such close proximity to each other, right next to this airport runway. I’m not sure I even knew how they fit together at the time, but I knew that we had to shoot them both.

The other thing that was thrown into very stark relief for me, just on a visceral level: there’s a scene in the film of everybody, in a very civilized way, sipping coffee and having drinks in the square in old Geneva…

And it just felt like it was slapping me in the face that this image, this event, this entire system—all of it was built on these other invisible structures and rules. I mean, OK—maybe I knew this in some kind of intellectual way, but I suddenly felt it so deeply, almost physically: a sense of the West being a completely gated community, and the ways in which all of these other invisible structures—including trade and movements of money—are what enable these societies, and our own society, to exist.

KE In a way, maybe because both are often “invisible”, the migration detention facility makes it easier to bring the zone facility into focus. So maybe the town is the third foil to the other two. It is also a legal envelope, but because it’s so old, we now think it’s quaint and charming. But it’s the same thing. It just has some kind of architecture or street life that we associate with urbanity.

I do think you found the perfect narrator. Because Gilles is telling a story that is at the kind of cross-section of all of those things. 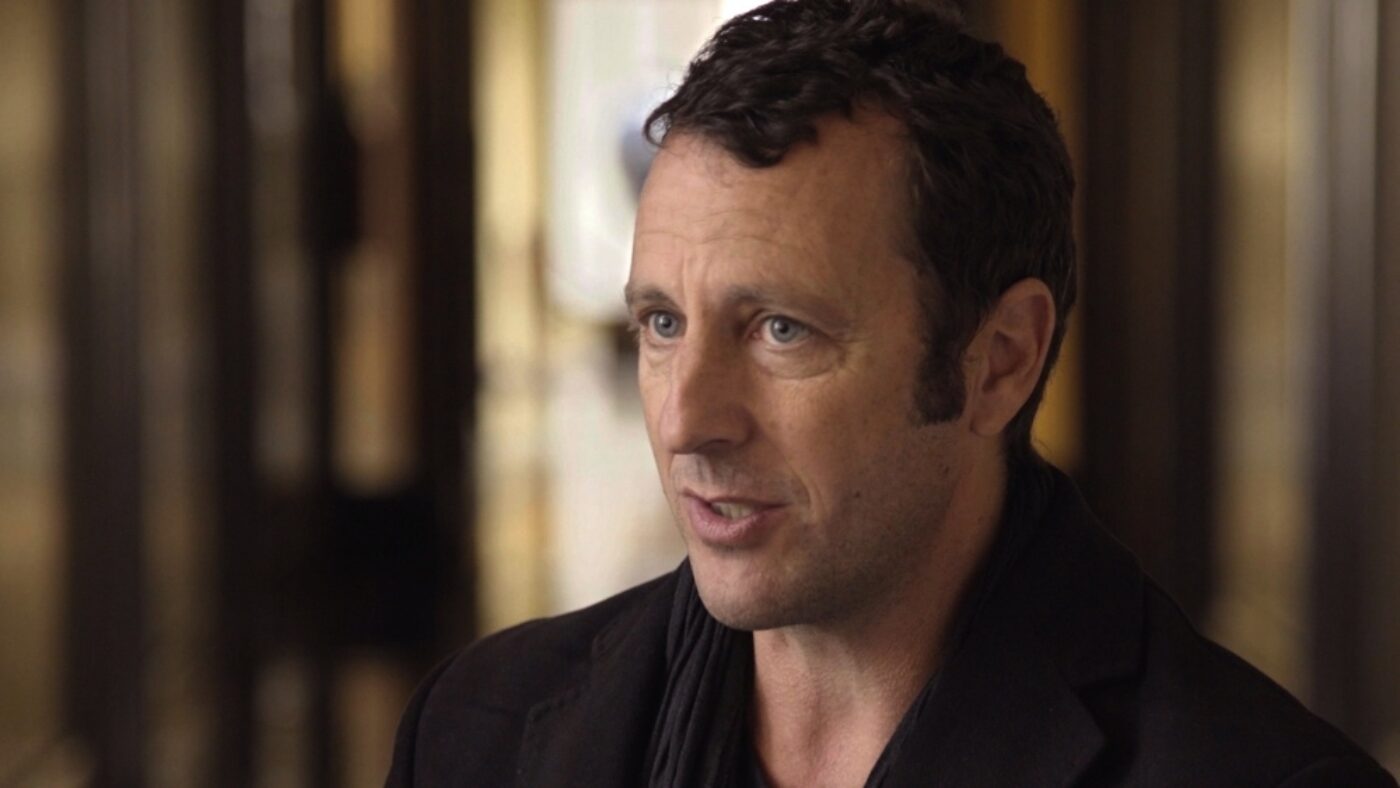 BK I mean, credit where due, it’s very much his story. He’s spent his life thinking about, in a very localized way, these very particular structures. My conversations with him informed a lot of my own connections and realizations. Gilles is really fantastic.

KE How did you find him?

BK When I first embarked on this film, it was a very quick and impulsive thing. Laura Poitras asked me if I’d be interested in doing something for Field of Vision. She was interested in having someone make a piece about these freeports, and specifically the Geneva Freeport, which was something that I was already very familiar with and fascinated by. I’ve made a lot of films about landscape and geography—road movies and things like that. So this idea of the extraterritorial territory was something I’d already come across and was quite familiar with. I immediately took the assignment.

I initially approached it almost as a video installation: no dialogue, almost no information, just an architectural study of these different structures and Geneva neighborhoods and the refugee housing out by the airport. A few months later I sent a cut over to Field of Vision. They looked at it and said, “This is really lovely, but we think we need a little bit more information in here.” (laughter) Rightfully so.

Then came a long period of experimentation—how to tell this story succinctly? We tried everything. At times I felt like I was trying to write a novel with ten sentences. None of it was working. I was throwing up my hands, because I thought, Well, if we go interview someone like Bouvier, it immediately becomes about him. We’ll lose all of these other ideas and connections that feel so important to explore.

I finally realized that what I needed was a cypher. Someone who could lead us through all this without it necessarily becoming about them. And I flashed back to those early conversations I’d had with Gilles, and I was just like, this is the guy.

KE Oh, yeah, I was wondering

BK —in Geneva, which was for me, conceptually perfect. (laughter)

BK It took us longer to get through security than to do the actual interview! They went through every single screw on every single piece of equipment. They brought in two dogs to sniff for explosives! But it was a beautiful space in which to shoot.

KE So he could lace through all the work you had done—all the layers of imagery and information.

BK By the time Gilles and I sat down and did the interview, I’d learned enough to know what to ask. And I knew a lot about him and his thoughts by that point. We talked for quite a long time. The interview was two or three hours long.

KE Some of the material you had from the previous version—the version you had shown to Laura—is still there, right?

KE I collect a lot of visual material from these free zones, but most of it is ephemeral. They produce a wonderfully strange promotional videos about shiney, sparkly skylines. I have a lot of it. And I am often asked to tell the history of this form.

All the stories I tell try to make the hidden violence of these spaces more palpable. Usually it is the violence of denial or exclusion and usually workers are on the losing end. But in the more recent work I have been doing about migration, the zone and the refugee camp emerge as strange cousins. Each occupies the legal flip side of the other. Your film is one that I would refer to, because it helps to make that clear. 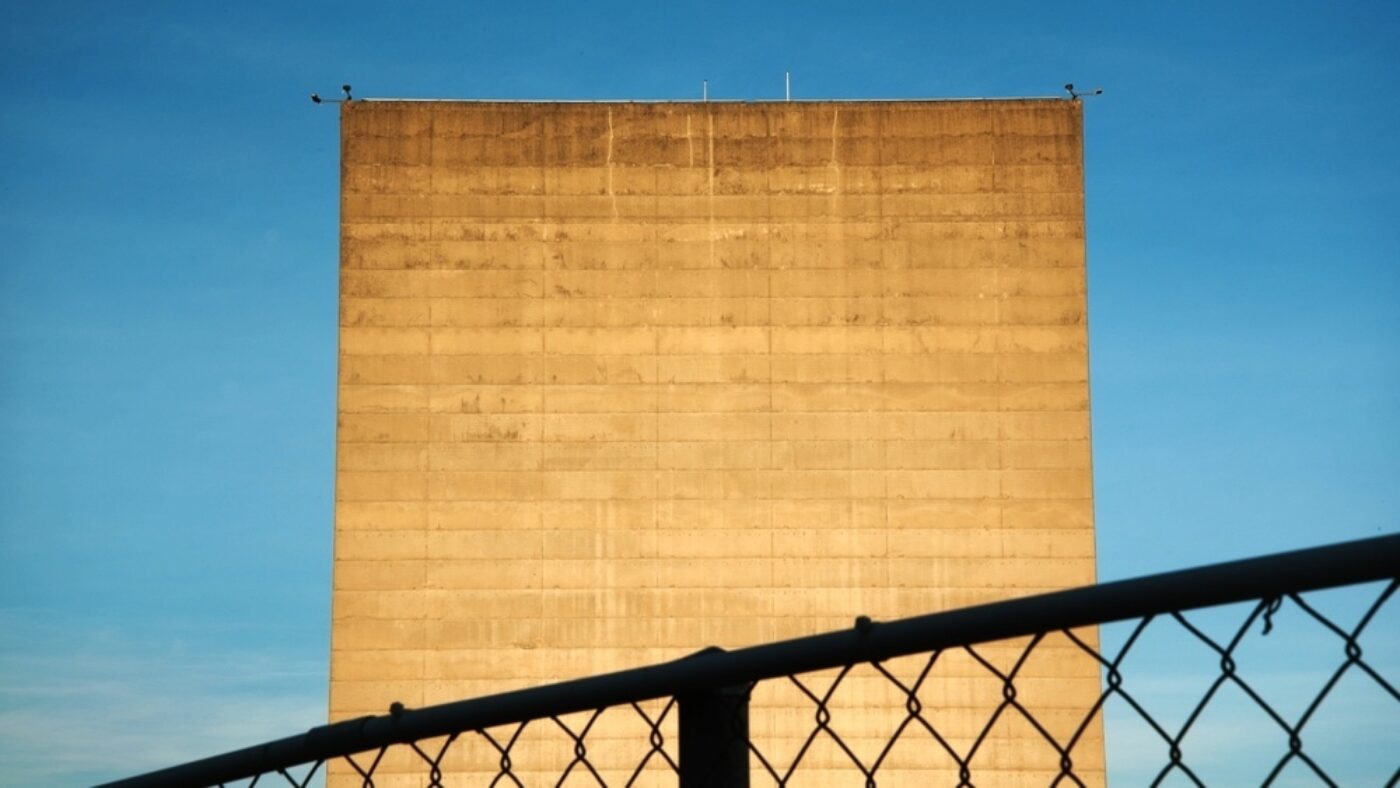 BK The freeport was one of the more difficult topics I’ve wrestled with, because of its invisibility. In some ways, it’s rather banal: accounting and tax regulations. (laughter) Things that are boring on purpose. There’s not a lot of drama there. And yet these legal structures have such a massive influence on global economics, trade, geopolitical power and, as you were discussing earlier, the movements of people.

I’m also fascinated with the ways in which you, Keller, move around the world. Every time we talk, you’re off to Palestine or somewhere else in the Middle East, to give a lecture about these things that are quite heady and academic. This stuff is so esoteric—you yourself seem to inhabit a very specific space in in the world through your work.

For me it means I can write a kind of footnoted fiction, that all I have to do is sequence evidence, and it balloons into a hyperbolic story. And yet it is very real, it’s measurable in human lives, it’s measurable in spectacular waste. It might not look like the violence of war, and all the other darlings of history. It has its own forms of exclusion and closed loops—it’s organizationally violent. There are no drawn swords. Instead it is the violence where nothing happens. There is just the daily aggression of imbalanced power and skyrocketing wealth. So maybe we need other slow motion visuals for this violence where nothing happens. Maybe your film is, among many other things, rehearsing something like that?

BK I love that idea of footnoted fiction. It’s true that if you simply observe and then sequence the scholarship, you end up with a novel—but it’s real. These literal and metaphorical structures tell a very clear story once you see them—and start to listen.

Keller Easterling is an architect, writer and professor at Yale. Her most recent book, Extrastatecraft: The Power of Infrastructure Space (Verso, 2014), looks at global infrastructure as a medium of polity. Another recent book, Subtraction (Sternberg, 2014), considers building removal or how to put the development machine into reverse.

After the Crash by Ellie Robins Christos Ikonomou, Rafael Chirbes, and new fiction from the eurozone.