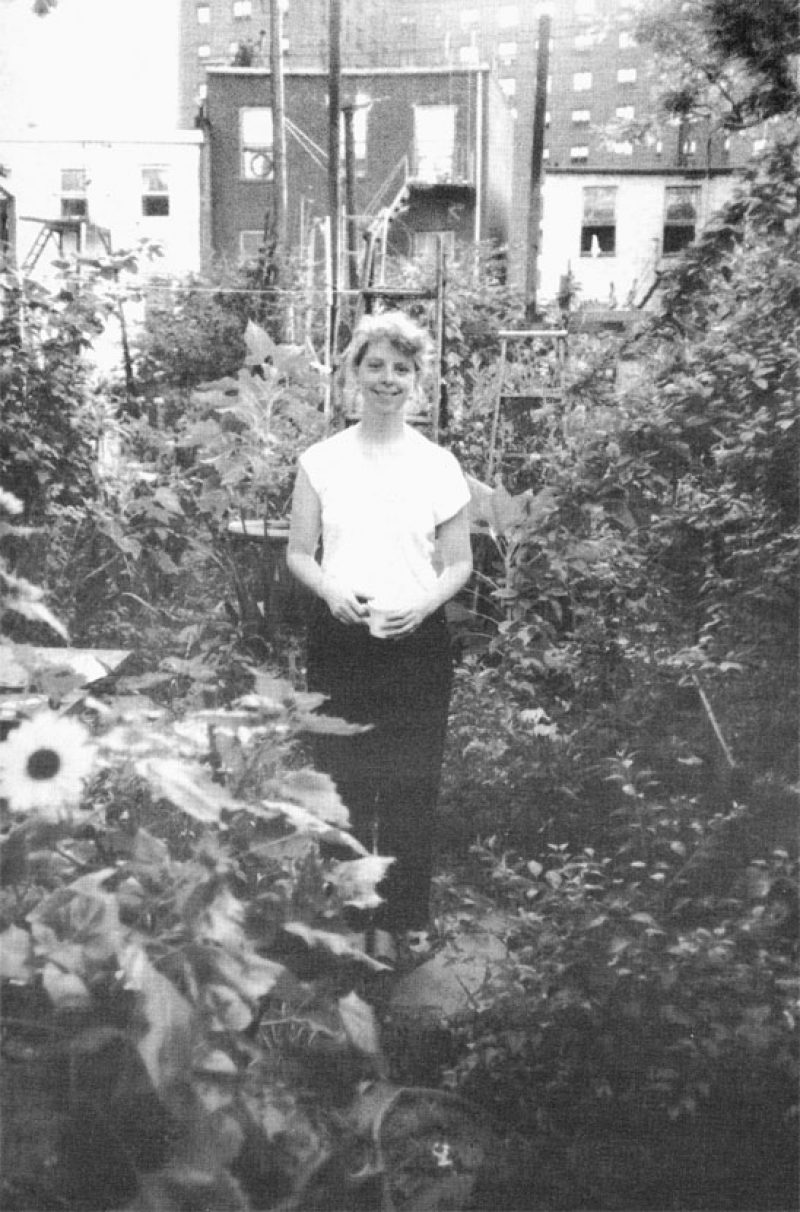 What unites the work of Polly Apfelbaum, Bill Barrette, and Nancy Shaver is their incorporation of objects and images that have a history of prior use, “found” objects and images, if you will. These interviews underscore that the haunting, magical quality in their work has as much to do with the clarity of their presentation as it does with any patina of age that has accumulated around their treasures. And it’s important to note that, whatever common grace their work shares, their motives and intentions are highly singular.

Stephen Westfall When I came over to your studio a week ago, one of the points you made was that it took you a long time to arrive at some sort of formal clarity. When artists use “found” objects, there’s so much attention paid to the object itself, its history, its record of use, whatever culturally or symbolically stands forth in the object—that often attention is diverted elsewhere from formal principles. It’s often held that the use of found objects contests formalism. It struck me as a gentle, revealing irony that one of the things you were very concerned about was this formal presence.

Nancy Shaver That’s true. Those are the elements I look for in the objects I choose and if I choose a landscape it’s because it is a landscape, literally that. It will project meanings but in fact, that is just another sideline of events. When we first talked, you mentioned shopping. Well, I’m reading Life, A User’s Manual, by Georges Perec, and it made me realize that I’m really not a shopper. In fact, I have always been a collector, and that’s where the work comes from.

NS It’s a matter of just having stuff around. Almost anything in my house can end up in a work. There are objects that I horribly hate to give up. But I’ve given them up for the sake of having these objects that I care about seen in a context; where they can be seen visually for a value of which I value them as well.

Perec is a collector, and there’s no end to what he collects and describes: a corner of a tray, a painted tray, and he’ll describe the picture on the tray’s corner that’s present.

SW It’s almost as if he doesn’t stop seeing.

NS There’s no end to this man’s sight. It’s just the most wonderful thing. It’s boggling.

SW A Dickens novel often seems like a collection of lists, there’s a similarly exhaustive process of inventory.

NS I’ve lost my copy of Bleak House and I’ve got to get another one. But it’s really interesting having read that little bit of Dickens and then picking up Life, A Users Manual, because they’re similar in this odd way.

SW Dickens’ description of … I want to call it the antique shop, the sort of junk shop in the Court of Chancery, and the actual Chancery itself with all the loose records in which … to some extent people’s lives stand forth in crumbling sheets of paper that are filed away in endless libraries. Social memory seems to spring out of a collective need for inventory and the resulting record.

It’s funny how history isn’t dead; we’re rewriting history all the time. We now have a history of women, a history of the working class or the peasant class. The way those histories were able to be reconstructed or teased out of the more boldly printed fabric of the history of those in power has been that somehow, somewhere, those artifacts and records pertaining to these buried histories have surfaced.

It seems that as art becomes more anthropological in content that it comes closer and closer to a status as a division of social inventory, historical inventory. Maybe it has always done this. But there remains a notion of the record. There’s an art that deals with found objects and the transformation from their history of prior use into a formal present. One of the strengths of your work is that however the objects you select refer to their own past, their reconfiguration does exist within that mythical formal present, that self-renewing present that an art object must bear, perhaps, in order to continue to be seen.

NS Well I’m very aware of the apprehension of an object’s prior use. I don’t think I would ever use an object unless I felt I could use it in a similar context to what it was originally intended, to give it the dignity of its intent. If it’s a found landscape painting, for instance, it should be viewed as a landscape painting.

The only departure from that would be with such found objects as, say, mechanical devices. I feel the meaning of their use is secondary to the beauty of their shapes and surfaces—the kind of surface an object acquires from age, for instance. It all adds up or comes together, but the first criteria is the formal qualities that make me choose one object over another object.

SW It’s funny how one perceives that in your work, as opposed to a Sol Lewitt, say, there’s a battered Euclidean geometry. In your floor tableau with the funnel and globe the geometry is brought down to earth, or brought into the world.

NS Right, used and abused. But it still maintains its essence of those shapes which are purely wonderful and mesmerizing. 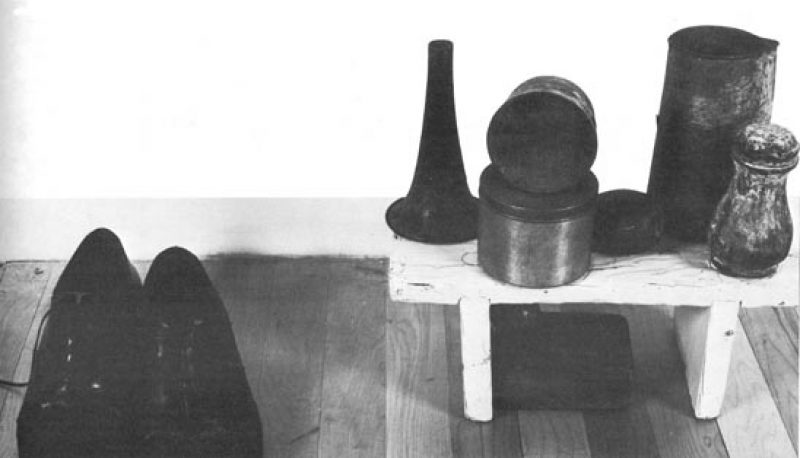 SW One thing I didn’t ask you was of your interest in the Italian Metaphysical painters like Carra and de Chirico. In de Chirico’s depicted studios there’s stacks of frames, and mannequin heads, and old rags. Your work is never as cluttered as that. I imagine your studio being that crowded when it’s not cleaned up, but the work itself seems to come out of that aggregate. It’s the formal isolation and reconfiguration that always seems so precise.

NS Everything is chosen, placed, and seen. You can know whatever remains of these things. Their place is critical and measured to the half inch, and it matters tremendously. But then there’s the odd side of it as well, so much I can’t control, because a lot of these things are so ephemeral. It’s almost built into the structure of use, that they will be crumpled down again and shifted. One hopes that some idea of their prior identity will remain.

SW Do you ever worry about how your work is installed away from your control?

NS I try not to think about it. You hope it won’t matter so much to someone else as it would matter to yourself and hopefully … I mean there are instructions, but I often wonder, in fact, how the work actually exists away from me.

SW A good measure of surrounding space is crucial to your work. A feeling that I get from it is a kind of sacredness … that you have the highest respect for these things.

NS I certainly do. It’s extremely important to me that the dignity of the object becomes apparent. If it’s a painting done by someone else that I’m using, it’s important that it be looked at as a painting, and in terms of the person who did it, and their imagination. This painting by Daisy H. E. Miller, for instance. I mean, who was she? She made a picture of roses. What did that mean to her? Did she have them in front of her? Was it an idea? Is she still alive?

SW And how was it taken from her; how did it escape her?

NS Right, how did it end up in the junk store? It was a flea market, actually, where I got this.

SW For all we know, it could have traveled a long way.

NS Right, and her wanting to make this art, and what was available in her world view.

SW It really seems as though you’re refusing to draw a distinction between critically acute contemporary art and art that has come to be called “naive” or “outsider art.”

NS No, I don’t make any distinctions. I really believe that anyone who puts anything on their wall as decoration, anything that’s not meant to be utilitarian, which they still view with the idea of art, well, then it is art. You know these utensils and ornaments that are made out of silver plastic, they are silver and that is their function in time.

SW The graves behind churches in New Mexico are covered with plastic flowers and it’s not because they’re cheap, but they love the plastic flowers because the brightness of their color and their flower shape lasts forever, or seemingly forever. It’s not a question of economic convenience so much as the availability of something everlasting to be placed on the grave of someone who has passed away.

NS It will remain a flower, and it will be seen as a flower even if it becomes faded and wrecked. I really believe the sense of that.

SW So it’s not bad taste at all. In fact, it’s very practical, very effective.

NS Right. I have read and have always loved Western novels like Louis L’Amour’s. I really enjoy them, but thank God I know about Henry James. I don’t devalue mass culture at all. It’s just a world view and within that the positioning of art changes.

SW In some ways it’s a question of scale. Which is something else your work makes physically urgent. So much of what you do works as metaphor. There is movement from small to large, as when you have a small collection of things on the floor. Given enough room, you realize you can fill the house with them. I mean, you can fill a house with just one sculpture.