Keyboard-to-keyboard and back-to-back, Thomas Bartlett and Nico Muhly shared an island of two piano benches swaying out compositions as one musician.

We are taught the piano is purely percussive, but its anatomy speaks otherwise. Inside a piano, you’ll find strings as well as hammers. Its body stands mid-ground between identities, something of a fish that flies or a bird that swims. Though it’s the action behind the sound that points largely to an instrument’s identity, one is safe to say a piano is percussive because the strings are struck.

But what then when pianos are played in two? The scale is doubled and a depth of sound achieved by four hands. The action is still percussive but now collaborative.

Keyboard-to-keyboard and back-to-back, Thomas Bartlett and Nico Muhly shared an island of two piano benches swaying out compositions as one musician. They were surrounded by pools of lamp light on The Kitchen stage last week and accompanied by a host of collaborators from ACME strings, The National, to Sam Amidon. The evening was divided into two sections: 1.) released and unreleased music by Bartlett and Muhly with interludes of rare gamelan transcriptions by Colin McPhee; played on two pianos by Bartlett and Muhly under the nom de plume Peter Pears (the tenor and life-long partner to Benjamin Britten) 2.) a performance in toto of Bartlett’s latest releaseThe Conformist; played by Bartlett, Muhly, and company as Bartlett’s band Doveman. Their mutable identities and ease in working together complicates traditional notions of authorship and the act of listening.

By taking on two different personae Muhly and Bartlett are able to bracket different bodies of work. They each have their own careers, but come together to collaborate as another musician. Their willingness to work together letting go of the ego, while holding on to their strengths, is refreshing in the highly competitive art world today. In fact, Doveman’s The Conformist is built upon collaboration, including vocals by Nora Jones, Beth Orton, and Martha Wainwright. Knowing the sense of community between these artists makes listening to the work more rich, like making connections from Pears to Britten to Colin McPhee—who was gay, divorced his wife, and moved into a Brooklyn brownstone with Britten and Leonard Bernstein in the early ‘40s.

Though present on the album, the openness and free spirits of Bartlett and Muhly are best seen and heard live. At The Kitchen, their personalities glowed in joking through back story and banter between sets. Muhly’s playing sounded even more crystalline seeing his precise finger work and direction of ACME strings from behind the piano while Bartlett’s voice, as if whispered through bed sheets and blankets, was even more hushed than recorded. Whether performing as Doveman or Peter Pears, Bartlett and Muhly are not to be missed. Their luminous execution, ethereal sound, and sense of music history make their playing sharp and feather-light.

To hear more from Doveman, Muhly, and Peter Pears check out their Myspace pages listed here. 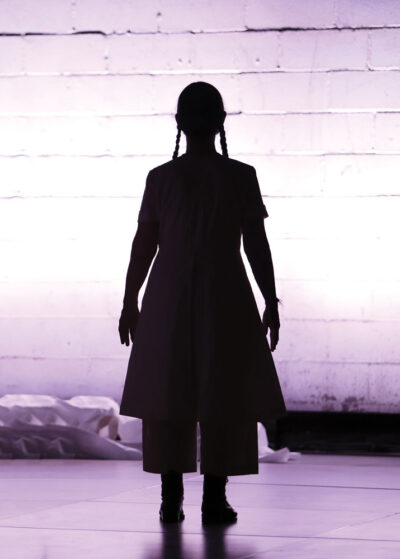 The two artists consider the roles that trust and doubt play in their expressions of the ineffable.