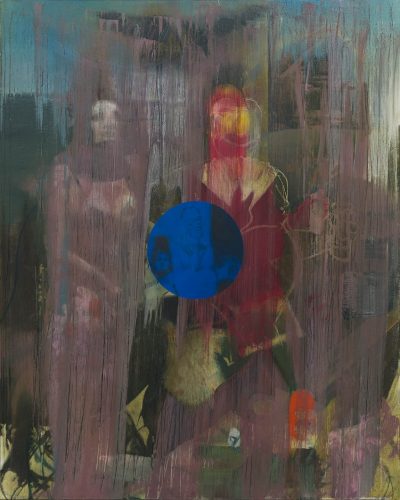 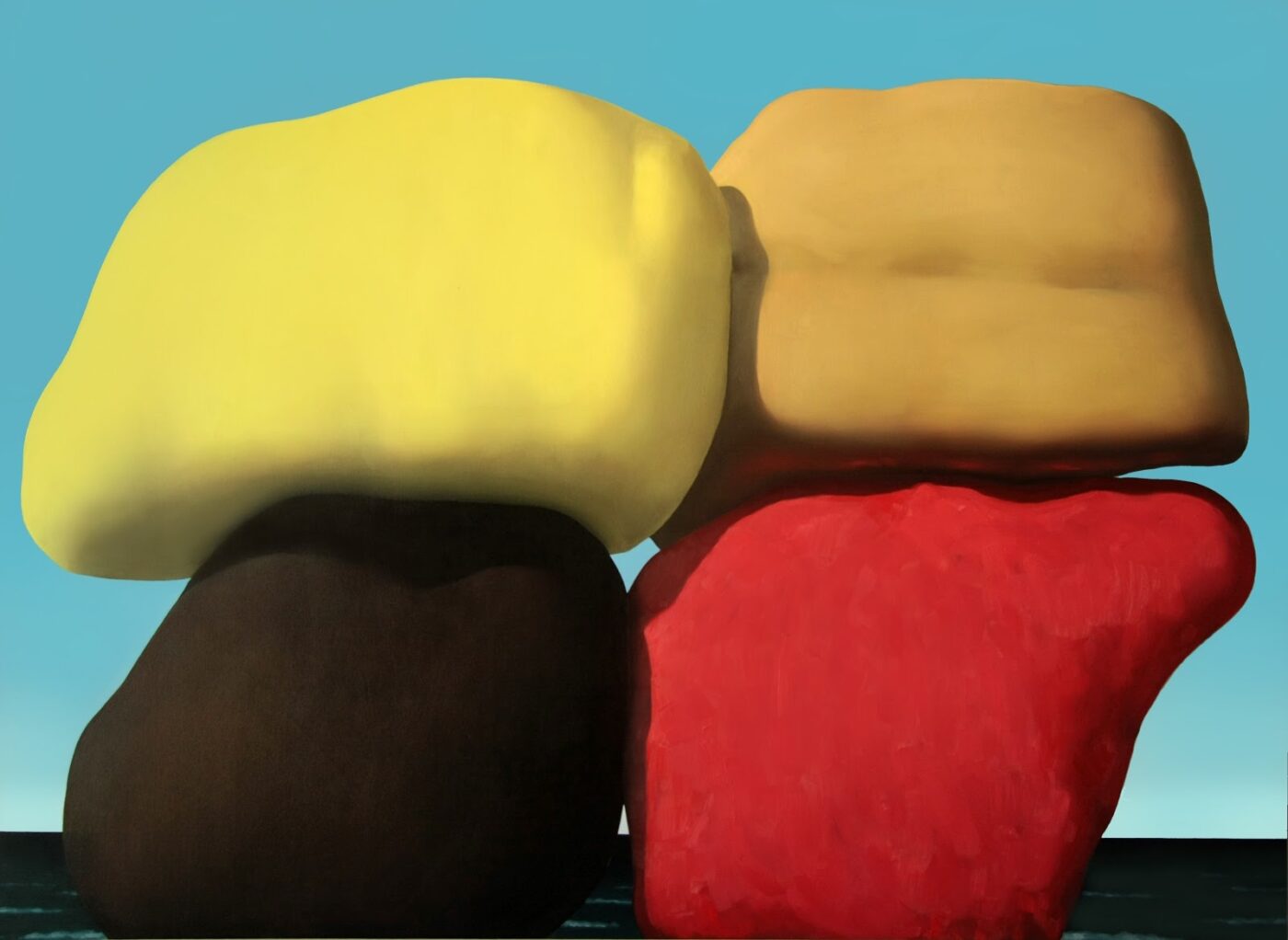 Jordan Kasey. Four Rocks by the Ocean, 2013. Oil on canvas. Courtesy of the artist.

I recently embarrassed myself among savvy friends by showing surprise at the fact that sperm determine the sex of embryos. I had thought they only made males. You knew that, my boyfriend said, looking at me sternly. No, I didn’t, I said later when we were alone outside the restaurant.

I am not surprised when everyone around me seems to take more interest in sex than I do. It seems that sex is something that people are naturally drawn to—they like to watch images of sex moving across screens, and they like to talk about and enact those images with other people.

On the night of my recent embarrassment, we were having dinner at a sushi restaurant known for its high prices and accommodating wait staff, who gladly lie across patrons’ tables to serve hand rolls and sashimi off the exposed parts of themselves. Our dinner companions, a couple, have been trying to conceive. They both want a boy, and they both have many ideas about how they can make this happen. Supposedly, a boy becomes more likely when a woman is inseminated when she is close to ovulating. Girls are caused by yogurt. No yogurt, our friend says. Absolutely none, says her partner.

I eat yogurt every morning for breakfast. It is one of the only things I do regularly. I rarely have sex because I don’t like it. I just don’t know, I tell my boyfriend, maybe try from the other side?

A close friend from childhood who’s now in medical school is fascinated by all that can go wrong in sex and reproduction. Recently she sent me this email:

It means to be pregnant without an embryo. There is only a placenta filled with water. Somehow, when the sperm fertilizes the egg, the genetic material from the mother is lost. Then, either the sperm divides so that there are two pronuclei that fuse to form the nucleus of the new cell, or another sperm fertilizes it.

My friend has told me that she loves having sex. She is married and still can’t get enough of what she loves. A few weeks ago she confided in me that she has been having an affair with her body buddy, another medical student she shares a cadaver with. My friend said that many long nights spent dissecting a dead body with another person lead inexorably to sex. Maybe you should try it, my friend said. She added, We do it with the cadaver in the room.

I have never really been interested in sex or reproduction. In high school, I was a good student except in biology classes. Biology teachers never seemed to like me. It was as if something in them was repulsed by something in me. It occurred to me one day in the class of a particularly hostile teacher that it might be something evolutionary, that maybe there are some people who are genetically predisposed to hate sex and everything that has to do with it, and as most of these people don’t reproduce, there are fewer and fewer of them. Maybe I was one of a dying breed.

Whether or not it’s true—now I feel silly even to admit this, since of course hating sex might not be genetic—I still believe that something like this might be possible, and that eventually, all of the people alive on the planet will be the ones who love having sex and babies.

I have met other sex-haters, though it’s rare to find them. And it isn’t even that we hate sex; we’re simply indifferent. I’ve found that people who actively hate sex tend to have a lot of it, violently, with whips and other implements for torture. I have had sex with one, and while it was interesting for a while to watch the hatred move around behind his face while he contorted his body and mine into different grueling positions, I eventually got bored and soon stopped seeing him except in dreams, where I sometimes still see him, though it isn’t him so much as the hatred I see moving furtively behind thick trunks of deadened trees in pursuit of me.

But indifference is something else. It isn’t the terrifying subject of nightmares but a fact of everyday life for me. It is, like yogurt, my regular thing.

For a while I dated someone who, trying to entice me, would buy me tea. He would pay surprising amounts to have dried leaves shipped from places too remote for me to remember the names of. Usually the packages came scrawled with Chinese characters over which a small label would confer a few words of poorly translated English: Beneficial for her abdomen, and, Take morning for night with mild water, and, Narrow leaf for her interest to drink. This boyfriend also wanted me to make certain sounds over and over. He found a mantra online that he said would have aphrodisiac effects. I made the sounds every night hundreds of times. I just want to go to sleep, I finally said.

Since sleep is a nighttime alternative to sex, I have done a lot of sleeping, and in my sleeping, a lot of dreaming. But dreams do not feel like other people. I keep running and running through those trees not knowing why they’re all dead, and in the morning, when I wake beside another person, I am uncertain what, and how much of it, can be said.

My current boyfriend says that he would like to have children—maybe three. A boy, a girl, and the third could be a surprise. I do not want to have any children, though I wouldn’t mind being pregnant with water. To carry a placenta full of water, even to give birth to a small amount, a cup or two cups—that thought comforts me. I have always liked being around water.

When I imagine giving birth to a human baby, I am filled with a great grief, and something without an end begins to unravel in me.

I suppose it’s sad that, not enjoying sex, I’ve lost an important way to connect with other people. Maybe I feel a little more separate and a little less happy because of it, but I know that I am also not happy having sex.

I am happy when I am walking alone along the narrow path above Cape Perpetua, a foggy outcrop of mountainous, forested land that in photographs appears desolate and remote, which it really is. I’ve come here by myself for a vacation and also—my boyfriend doesn’t know this—to search for a place to live.

I’m worried about you living there by yourself, my friend emailed after I’d sent her a photograph of the cape that I’d taken from the cliff above. Where did you say this place is?

There’s something I’ve found here that’s unlike what I’ve found anywhere else, and I wonder if it approximates the intimate connection people experience while having sex, when the sex is the sort that unifies two people so that they seem to inhabit a single body. I have heard sex described like this, and though I have never felt this unity while having sex, I feel it when I’m walking alone above the cape, looking down a steep drop-off of hundreds of feet to the tide pools and wet debris of a stony beach—I feel that I am two of something that has finally found a single body.

Sometimes the water is calm, I replied to my friend.

Evelyn Hampton is the author of Discomfort, a collection of stories Ellipsis Press will publish in 2014. Her website is Lisp Service. For more work by Jordan Kasey, visit her website.

The Father by Trey Sager

When Angie called he was washing the bottoms of his shoes, concerned that his soles were soiled with the runoff of other donors.