Painter Michael McClard talks with Betsy Sussler about his work, which focuses on mythology and the stars. Betsy Sussler Sure, where, oh! It’s beautiful! What is it?

BS Where do you look?

MM Here I’ll show you—see—and it has filters too.

BS This is great. You have the best view. Look at that there’s an empty apartment. Why didn’t you tell me?

MM Someone just took it.

BS Look! They have the whole front. I can’t believe you didn’t tell me about it.

BS Oh. Gee, you can see everything huh?

MM I use it to look at the stars—that’s what its for.

MM You can collect 50 times as much light with this as with the naked eye. You can even see Andromeda with it.

BS Are we recording?

BS Wouldn’t it be better if you just set the mic up on a table?

MM I want to walk around—Here try the headphones, see if it’s clear.

BS I can hear you but it would be better if you turned the radio down.

MM Can you hear me now?

BS Yes Michael, but it would be better if you turned the radio down.

MM What about now?

BS Michael, turn the radio down.

MM Oh boy, I have a headache.

BS Citron. Take some aspirin. Tell me about the distance thing—the light years between us and Andromeda…Now, the recorder’s on…So the moon is here and…How many miles away it…? C’mon Michael, you remembered before. How many miles in a light-year.

MM When I saw it the other night I couldn’t believe how big it was. It looked almost as wide as the moon even though it’s fifty thousand million times further away. It’s huge but very faint because it’s so far away. So here’s this huge thing in the sky that you can only see on a very clear moonless night.

BS We could be seeing the image of Andromeda 2.2 million light-years after it has exploded and disintegrated.

MM No, in all probability it still exists. There are certain physical phenomena involved that are apparent over a large time scale and you could see if another galaxy were approaching and predict that it could be colliding at such and such a time.

BS But if it takes that long to see the image you are not seeing the phenomenon in the present tense.

MM There’s a continuum. And there is a brief continuum of observers.

BS Who was Andromeda anyway—I mean in mythology?

MM I don’t know, I’ll look it up. “Andromeda, an Ethiopian Princess who was chained to a cliff for a monster to devour but was rescued by Perseus who married her.”

BS Is there a galaxy named Perseus?

MM Listen, “a northern constellation directly south of Cassiopeia between Pegasus and Perseus.” Isn’t that nice?

BS Yes very nice: You use physical phenomenon in some of your paintings as visual puns. There was one in particular…

MM Two Space Ships Passing in the Night. That painting developed out of an obsession with the general theory of relativity.

BS I guess the curved line between the two discs is a clue.

MM There’s an equation, that’s very ironic, developed by somebody named Lorenz. At one time when they became aware of the wave like properties of light, they supposed some sort of mechanical ether that transmitted light. Then they wanted to establish the existence of this ether and they attempted to do it with this experiment and it was a reasonable experiment but they couldn’t no matter what they did, prove the existence of this ether. They were supposedly going to measure variations of velocity of different directions of light—or the motion of the earth through space relative to this ether. But they couldn’t do that so Lorenz devised a mathematical formula that could provide a model for the reason that this phenomenon wasn’t observable. And it was something to the effect that in relationship to this ether that—well something happens with distance and time. So as we’re approaching the ether the measuring instrument becomes shorter in the direction of motion and mechanical action slows down.

BS You mean the closer you get to it the slower your movement so that you can never in fact reach it.

MM It’s a constant ratio depending upon your velocity with respect to the direction of the ether. That equation, which supplied the mathematical filler for this theory—to make the theory more plausible by saying that there’s an ether but you can’t observe it because as you approach it or move away from it, its apparent velocity always remains constant because the time and the distance are altering. Their values are altering at a constant rate. So what Einstein did was dispense totally with the notion of the ether but keep the coordinate Lorenz transformation and apply it directly to space as defined by a coordinate system with the speed of light being a physical constant that never varies.

BS Why use Lorenz rather then Einstein?

MM I’m not choosing him—the thing is it must be a really antique equation—all it is is an elliptical equation and the relative values that you get for the length of one second and the length of one meter at any given velocity, using the Lorenz transformation as Einstein used it…

BS Did you use that equation to establish the distance between the two ellipses in the painting?

MM The focii of the ellipse? Yeah. To establish the ratio and the values of those ellipses were all 25 percent the speed of light.

BS A couple of years ago you did a few plays—theater sets and props which you designed and dialogue which you performed. Want to tell me a little bit about those?

MM Ha, ha, Betsy—some very modest plays each of which I performed only once.

BS What was the one where you were pushing the pencils around with your nose?

MM That was my first performance in New York: No Weighting in the Wings.

BS What about the dance steps? That was great.

MM You liked that one? Temperate Tantrum.

BS Uh huh, and that life-size car made out of cardboard. Do you still have the props? They were art objects.

MM I have the dance steps—the diagrams. I can always build another car.

BS You know, Mondrian used diagrams of dance steps for his paintings.

BS Most of the things that you did with the plaster were characters?

MM Yeah, I guess that’s what they are.

BS Why do you think they are something else? It’s not like you throw the plaster onto the chicken wire, mush it around and paint it. You usually have an image in mind—or do you?

BS Do you put it on, then see what it looks like and make a face out of it?

BS You don’t have a particular face in mind?

BS What sort of abstraction?

MM Oh, I don’t know: a situation, a state of being, an historical person or moment. The process making the work is the process of visualization. The piece is is finished when the visualization is complete.

BS They remind me of 19th-century books on physiognomies and their relation to mental states—the sort of facial structure one develops if one suffers from melancholia.

MM I am fascinated by the plastic variations of the face. Distorted in some ways—or not distorted, it’s so expressive—an expressive apparatus.

BS I think your pieces are very theatrical—for several reasons. First of all the framing which is usually an integral part of the structure—as in a proscenium arch; secondly the faces look out at you—their frontal position makes them seem to be declaiming and finally, they all seem to be characters, largely because of all the gestures you use to build up the facial structure. Your earlier paintings resemble stage sets—backdrops with props or characters in front of them. Do you think about acting much? I mean do you think of the figures in your paintings as actors?

MM Yes, of course. I think “characters” is better. They’re not actors. They’re really more about the abstraction of a character and at the same time they are physical objects which are things in themselves. And it’s interesting the way the idea changes with the direct physical intervention—sort of a nice process.

BS Yes, you always include very witty comments on the process—for instance The Red Birdwhich is actually the shape of the movement of a piece of wire through rise plaster—the piece of wire that fastens the painting to the wall.

Anyway, the earlier work where the figures were actually painted and placed in front of back drops—like that large robed Greek like figure with the yellow plaster face and the two red orbs for eyes hanging down in front of it like pendulums and this green and blue canvas against the wall for heaven and earth.

MM Yes, he’s really a fascinating figure. And it’s true I do fantasize the whole drama of the being who is being represented…

BS And all that atmosphere you give them—Michelangelo in that dark dingy cellar with the cadaver—and you built the lighting for the painting right into his head.

MM He did wear a conical hat with a candle in the top. There’s something in Vasari about it. Someone even tried to bribe him with fine candles because he was known to sculpt with this hat so that he could have both hands free for the hammer and chisel.

BS Bribe him for what—he didn’t have any power did he?

MM He had the power of making art.

BS Oh, a trade-barter. A million candles for one sculpture. Are you interested in mythology—as a reference?

BS They all connect natural phenomena with human motives and emotions.

MM Well, I think it’s quite clear that they’re about being human in relation to phenomenon. 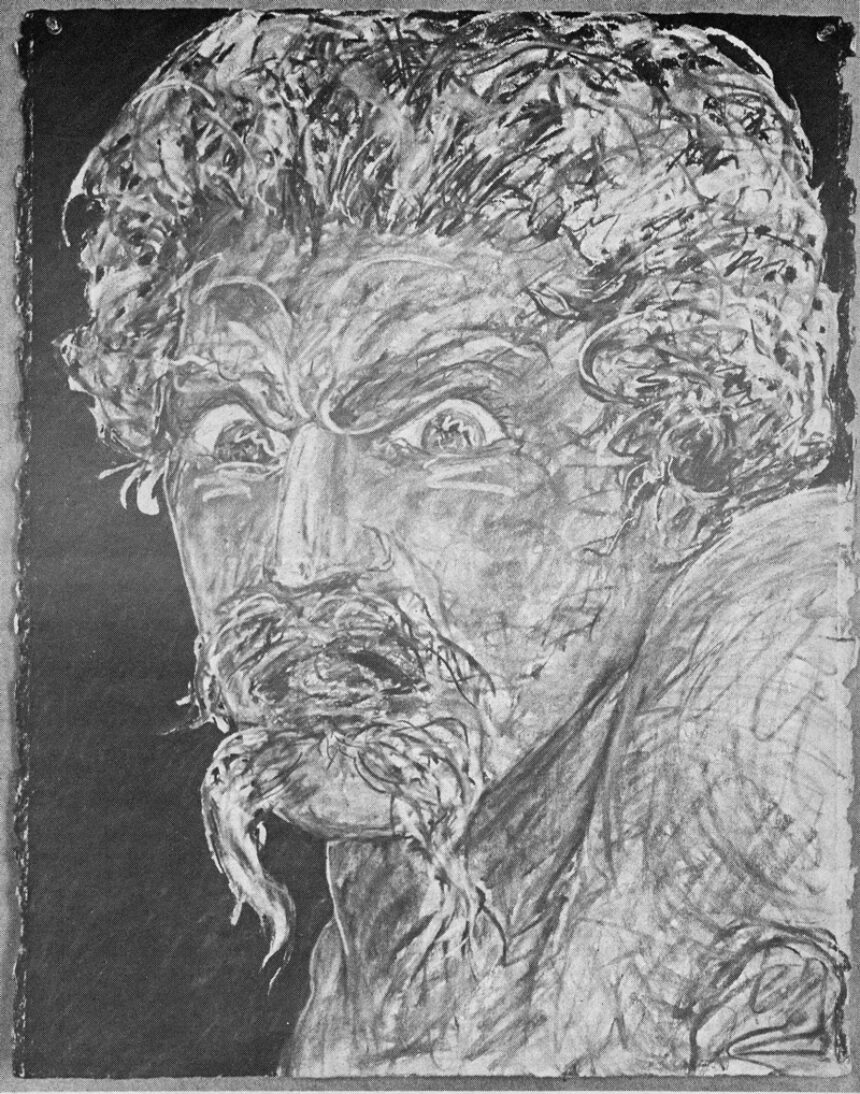 BS The pastel drawings hanging on the wall; are they the Planets portrayed as The Gods or simply The Gods who are used to name the planets?

MM They are the Planets as Roman Gods. I guess—I mean I just wanted to anthropomorphize the planets. I’m just having fun.

BS What’s that big pastel up there? What’s it called?

MM Oh, Liza called it The Children of Paradise.

BS Because of the crowd and the big clown hats, as in the Festival scene in Carne’s film? What do you call it?

BS Are they fighting?

BS Kind of. There’s no blood.

MM Here, I’ll show you. Here are the heads that have been chopped off.

BS And that’s the sword? It looks like a big feather.

BS Oh, I see, that guys getting his head chopped off.

MM And there are bloody bodies on the ground that they are stepping on. I was thinking it was futuristic. Like someday hand-to-hand combat will be the only acceptable way to conduct war.

BS More on the up and up. 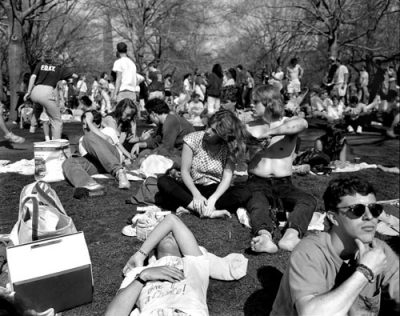 On the occasion of Tod Papageorge’s “The Acropolis” series in Picture Magazine, we revisit his photographs of Central Park in the ’70s and his friendship with Garry Winogrand.