Medium of Sand by Forrest Muelrath

Michael Robinson provides insight into the methodology and philosophy behind his collaged films. 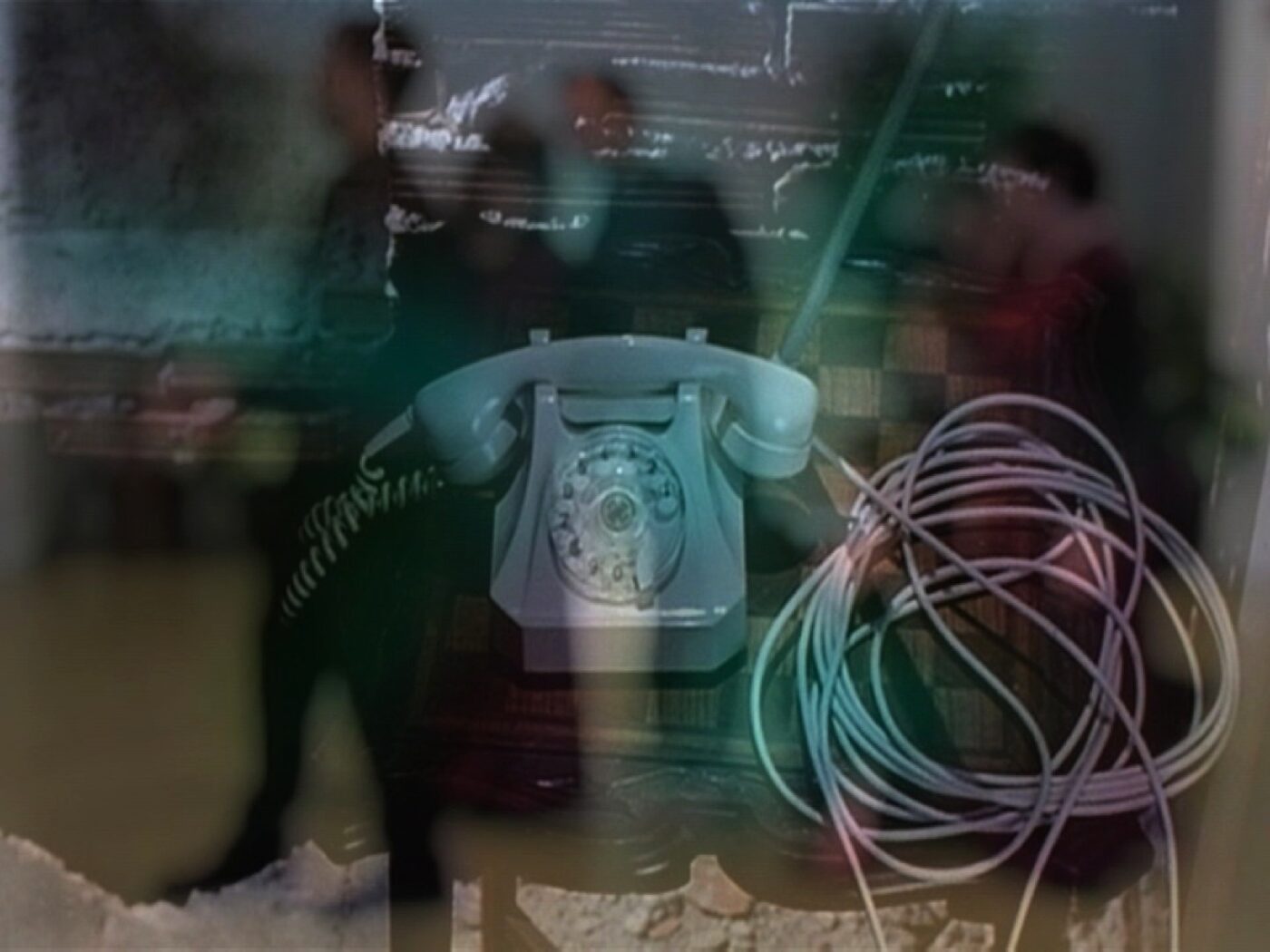 In the early days of public television, programs such as The Medium Is the Medium were produced specifically for experimental video by artists like Nam June Paik to present their work; in today’s world of digital ubiquity it’s as if this early video art has been diluted and disseminated to the myriad of screens we interact with daily, creating a wash of video art noise that hums as consistently as power lines. Many artists who work with video, such as Ryan Trecartin or Actually Huizenga, successfully shout through the wall of simulated video reality with high-volume weirdness. Even more video artists are confined to the art world in gallery-only viewings. Michael Robinson’s work is striking because it communicates without transgressing modern media’s spectacle while, against all odds, accessing the humanity among the digital noise.

Robinson’s films are largely composed of appropriated media that has been altered, as well as original footage shot by the filmmaker. However, the materials and aesthetic are not what make Robinson’s films exciting—these elements are as much a part of a spectacle, as in art world spectacle, as the popular medias he’s borrowing to make his art. What resonates in Robinson’s films is a narrative of a poet’s words drowned-out by the modern media onslaught.

His films are loud, with an array of visual effects that have the power to alter physiology —the screening I saw at the Whitney Biennial came with warning about seizures— so it’s beneficial to see the films on the big screen. Nonetheless he has posted many of his films to Vimeo, and the following video translates fairly well onto the small screen.

Robinson discovers where hope might exist by exploring the void where it does not. The villain of the 1957 Russian animated film The Snow Queen becomes a didactic hero amidst a swirl of modern effects: “Flowers, beauty, joy, love, are all illusions, they do not exist at all. Forget them.” Stripped from its original meaning, this dialog reveal something about the impossibility of romanticism and love when constrained by modern media, spectacle, and fairy tales. Cyndi Lauper’s 1984 single All Through the Night serves as a reminder of love’s innocence and the hope in desire until it is smashed against a wall of noise.

Robinson’s new film Circle in the Sand , which premiered at the New York Film Festival, is a 47-minute fantasy of the aftermath of a future American civil war. I asked him a few questions over email about that film and his previous work in hopes that I might gain some insight into his process and general philosophy. Michael’s responses offer a view into how these films work: how they manage to lull the viewer into a hypnotic state with media that has dreamlike familiarity and then hammer in some cruel reality about the state of the world.

Forrest Muelrath One of the first things that struck me as I started to appreciate your films, was how easy they are to watch, and how affecting they are emotionally, despite feeling dissociated from any characters and struggling to locate a traditional narrative. I think it was during Victory Over the Sun, as I began to realize I was listening to an instrumental version of “November Rain,” that I first had this thought. Is this accessibility something that is intentional or preconceived?

Michael Robinson Absolutely. I’m not opposed to inaccessibility, but I think beginning from a point of familiarity or comfort makes it more purposeful to then to twist things and go elsewhere. The emotional arc of my films is really central, and it’s hard to activate that without some level of seduction. And as much as we long for things we can’t have, we are also drawn to what we know. So while a given film might remain abstract in terms of plot or character, it still adheres to a kind of dramatic progression, which gives the viewer a sense of how to navigate the film, and most of that happens through the sound design. In some ways I’d rather begin from a point of accessibility so as to arrive somewhere less accessible, unraveling familiar elements into a more open-ended mess.

FM Can you talk about “November Rain”—your personal history with the song, and offer some details of this version and why you choose it?

MR Use Your Illusion I was the first CD I ever bought. I was in 6th or 7th grade when “November Rain” came out, and for years it was ubiquitous at any party, school dance, or anywhere with a radio. Looking back, that song feels like a bit of a crux in pop culture – marking a definitive end of the unselfconsciousness the 80’s, killing off one idea of cool to make way for the next. The music video was also hugely popular, yet mysterious and apparently coded with symbols. Axl Rose’s supermodel bride dies at their wedding but we never know how or why.

I made a few versions of Victory Over the Sun before landing on the final one, and I was originally using a heavily processed version of the ABBA song “Arrival”—which sounded like a fanfare of digital bagpipes. That was too uplifting though, and the piece needed more aggression, particularly in the end. The commercial aspect of the World’s Fairs, which really inspired the whole film, felt better complemented by a hugely popular power ballad. The song’s epic nine-minute length, and its “nothing lasts forever” sentiment nicely complemented the abandoned sites in the film.

FM By the end of your screening, and especially with the last film, Line Describing Your Mom, I began to think your films as being incredibly cruel. Like Artaud’s, they harshly expose some truths—truths about American Exceptionalism, Romanticism, Modernism, and other philosophical frameworks—but also cruel in the sense that they physically hurt my eyes. There was a seizure disclaimer at the beginning of the show. Has anyone been physically hurt by watching your films? How do you imagine you would react if someone was physically hurt?

MR I’ve heard reports of people needing to throw up during my films, but I don’t know of anybody actually being physically damaged. Of course I would feel terrible if my work induced a seizure in somebody, so I do appreciate when venues make a point of warning people. As for cruelty, I guess I see the damnation and aggression in the films as pretty humorous, poking fun at themselves more than anything else. The mythology and disillusionment pounded down our throats by mainstream media are way more cruel than anything I’m doing. My films address and mimic cruelty, but I don’t think of them as actually cruel. I’m just trying to make a space to think, and part of that space is concerned with the ways by which media manipulates and shapes our emotional development.

FM There is this line of Artaud’s on the subject of lighting: “The particular action of light upon the mind, the effects of all kinds of luminous vibration must be investigated, along with new ways of spreading the light in waves, in sheets, in fusillades of fiery arrows.” How do you relate to that?

MR In regards to flicker, slowing down the waves of cinema allows for a different sensory and spatial experience, shifting the illusion of reality created by 24 frames-per-second towards something unsettled or overwhelming. So I’m less interested in pointing to the mechanics of any cinema apparatus than I am in creating an expansive sensory experience, and doing so in conjunction with the emotional strains of film – unraveling the image just enough to underscore its mental core. Visually or sonically, I never want the effects and manipulations in my films to feel purely formal—they all play specific emotional or psychological roles, and are meant to be experienced as parts of an abstract narrative.

FM What are your thoughts on your work being seen on the Internet as opposed to in a theater?

MR A few years ago I was hesitant to put anything online, but it has actually been really great having my short films there for anyone to stumble upon or revisit. I still consider a darkened theater to be the ideal place to experience them, but I’m happy to see the films have multiple existences in different contexts. I haven’t decided how I feel about putting longer works online, though. The scattered attention span of Internet viewership could hurt a longer film in the way that doesn’t harm a ten minute piece.

FM Circle in the Sand is longer than any of your other work that I’ve seen. Did you set out to make something this long? Do you see yourself doing feature length work in the future?

MR I imagined this piece would land around 40 to 50 minutes from the beginning. It’s an awkward length in terms of the standards of theatrical screenings, but it’s the same duration as an episode of any television drama, which I find interesting in that it’s long enough to give the audience time to feel immersed but short enough to retain a sense of being fleeting. I am in the early stages of my first feature, which is closely related to Circle in the Sand, but I’m working on a few shorter works as well.

FM Can you talk about your process for collecting the text sources for Circle?

MR The sources came to me in a variety of ways—some books were purchased for their covers, some for their titles, some had been sitting around for years, some I sought out in the weeks before shooting. I wanted a combination of various types of writing, which would complement and complicate the situations and atmospheres of the film— murder mystery (Death Likes it Hot), supernatural trash romance (Eat Pray Love), inane restaurant reviews (Yelp.com), Scientologist sci-fi (Slaves of Sleep), and fierce social deconstruction (Destroy, She Said). Both the spoken and written texts end up working as a kind of off-kilter narration within the film, projecting themselves onto the scenes they appear in while remaining artifacts from the world outside of the film.

FM What is your experience with directing actors? Any theatre background or specific methodologies?

MR I can’t say I have any specific methods other than choosing to work with people I feel comfortable with, and who have the patience to sit around for hours doing very little. For the female characters in Circle in the Sand, I approached three friends who I knew had sharp comic timing, and could make good cranky/bored faces. Everyone in the film is also good looking, which is important after the apocalypse. Shooting Circle in the Sand was actually really fun, which was a new experience for me. There were numerous times I was worried I would shake the camera from laughing too hard.

Robinson’s film Victory Over the Sun is included in the group show Temporary Structures at Walter and McBean galleries in San Francisco, up now until Dec 15. These Hammers Don’t Hurt Us will be included in the group show The Black Lodge at Interstate Projects in Brooklyn, opening on view from October 26 through- December 9. For more on Michael Robinson, go to his website.