Matthew Zapruder’s new book, Come On All You Ghosts, does what many great collections of poems do: it expands a reader’s sense of what is possible, both for poetic form and for reality itself. 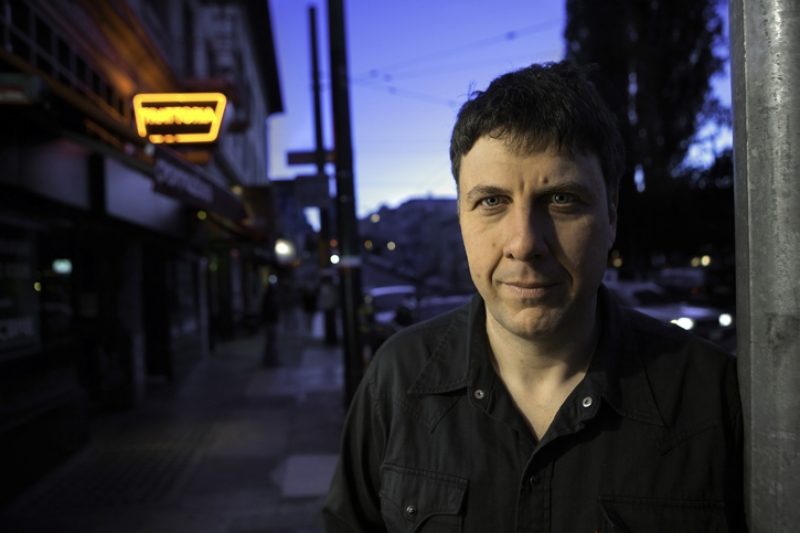 Matthew Zapruder’s new book, Come On All You Ghosts, does what many great collections of poems do: it expands a reader’s sense of what is possible, both for poetic form and for reality itself. With dynamic, logically complex sentences, Zapruder posits a world that is both extraordinary and refreshingly ordinary. In them, a cat may stalk a giant pet snail, or the poet may perceive himself as “a mountain of cell phone chargers.” To read this book is to suddenly see the fantastic elements that suffuse everyday existence.

Zapruder pushes the boundaries of common structures, like the sentence and the simile, to their logical extremes. It’s as if the poems have a surface tension that’s always on the verge of breaking, almost spilling the strange sense they make. There’s a generosity in this abundance that inevitably leads the reader to consider the limits of her own thinking and feeling. We discussed the extremes of experience that guided the writing of Come On All You Ghosts, as well as Zapruder’s work as a translator and editor.

Iris Cushing Many of the poems in Come On All You Ghosts operate by way of long, intricately-structured sentences. How do you map the arc of these sentences? I’m thinking of Proust’s idea of the sentence as a unit that can “encircle the truth with a single—even if long and sinuous—stroke.” 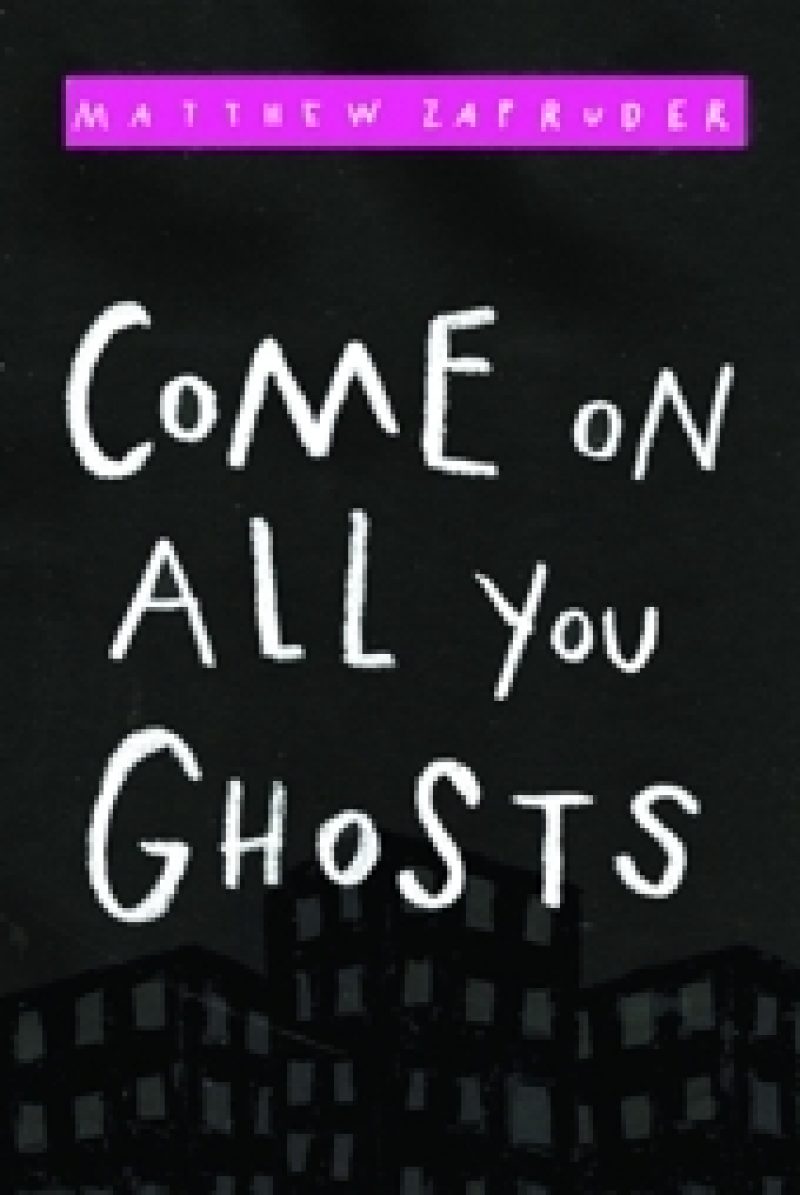 Matthew Zapruder Sometimes I write very simply, with direct, normative syntax, and sometimes the sentences can be more complex and winding. When I am writing, I am in search of something, a feeling that will be produced by certain combinations of the words as I try them out. So I move words around, trying different combinations, taking words out and putting new ones in, letting my mind and my feel for language direct me. I am congenitally uninterested in complexity for complexity’s sake. It’s just sometimes what I am through my explorations led to say is, by its nature, very complicated. Human feelings are as complicated as physics or advanced math. And language is certainly as complex and subtle a mechanism as humans have ever come up with. I want to make things as simple and clear as possible, without being untrue.

Because of the complexity of the instrument of language, and the incredible sensitivity humans have towards it, variations in syntax can have powerful consequences. To take a famous example, it is one thing to say “About suffering they were never wrong / The Old Masters” and entirely another to say “The Old Masters were never wrong about suffering.” Even though the content is identical, each sentence enacts an entirely different feeling about the information being conveyed. I believe poets are people who have an instinctive sense for these differences in language, and who are interested in exploring those differences.

IC One of the most powerful aspects of the title poem in Come On All You Ghosts is the way it directly addresses individuals both broad and specific, both living and dead. A poem as a direct address is closely related, in my mind, to a spell or a prayer; it has the power to make something happen, at least potentially. How, if at all, does offering these imperatives affect how you write?

MZ One big and comical mistake many poets make is to feel that they are somehow special or different for feeling a sense of aloneness, which leads to the melancholy moody stereotypes for which poets have for centuries been sometimes justly accused. Actually, feeling alone is the most common feeling in the world. Eileen Myles writes in “An American Poem,” “Do you know / what the message of Western / Civilization is? I am alone.” It’s a fundamental and for me productive contradiction, that my feeling of aloneness, because it is just like everyone else’s, brings me closer to everyone.

I think the thing that poets want to happen — the spell they might want to cast — is not to be alone anymore, while still getting to be alone, which is, after all, what you probably need to be to write a poem. A classic example of this is Coleridge’s poem “This Lime-Tree Bower My Prison,” (which happens to be “addressed” to his friend Charles Lamb) where Coleridge thinks about his friends who have gone on a walk without him, and imagines them having a great time, and both laments and revels in his distance from them. I bet even Frank O’Hara felt alone when he was writing his poems on typewriters in the middle of fabulous parties.

So when my poems directly address someone or something, it’s probably just that I would like to feel for that moment together with the person, and not so much because I want to conjure that addressee in a mystical way, though now that I think of it, perhaps those are just different ways of saying the same thing.

IC That Coleridge poem is really wonderful. Joshua Beckman, your co-editor at Wave, was the person who first turned me on to that poem. Which leads me to ask…how has being an editor for Wave affected your writing? Your poems themselves often include specific fellow artists (Neko Case, DFW); I imagine being part of the Wave community must factor into your ideas somehow.

MZ Brian Henry, my friend and fellow poet who revivified Verse Magazine, and I started Verse Press (which eventually became Wave Books) in 2000. We published the work of our most admired peers, and getting to work closely with those poems was definitely a further education for me as a poet. I got to think hard, and talk with each of those authors, about what decisions they were making, and why.

Being inside poems, as a respectful, curious, thoughtful observer, and then trying to articulate to a writer what I bring back from that experience, is the most valuable thing I can do as an editor, and a teacher. This concept of being a good reader is I think one way of understanding Keats’s concept of negative capability. Actually if you read the letter, you see that Keats was responding to people’s tendency to need to have an opinion about everything, so that they seem to others to be smart, witty, worldly. I try to put all that away, and just be a good, humble reader, willing to admit my own confusion and uncertainty.

IC You’ve also translated the work of Eugen Jebeleanu. What was that like?

MZ Jebeleanu wasn’t alive any longer when I was doing the translations. I pinned a photograph of him looking directly at the camera right above my desk. Ritualistically I would always take a moment to look at it before I began translating the poems, usually at night after I was done with all my other work, and think to myself, I have an obligation to the work of this great poet, to bring it over into English with respect and accuracy. As if he and I were engaged in some kind of a pact we had made without ever meeting each other.

I was living in the upper story of a very old building in North Hadley, Massachusetts, right at the base of a very old mountain that someone told me had once been much higher than Everest, I don’t know if that’s true. A giant sugar maple made a sort of canopy over the entire front of the house, and the whole place felt quite ancient and solemn, maybe even a little sacred. If there are spirits anywhere in this world they are definitely there.

In order to translate the poems with respect and effectiveness I had to put away my own poetic values. I had the sense that I couldn’t just mindlessly and slavishly imitate what was being done in the original language, Romanian. As a former PhD candidate in Slavic Languages and Literatures, I was well aware that different languages have different ways of organizing and communicating information. However, I also had the sense that trying to put my conclusions about these differences into precepts, and to make decisions about the poems based on those precepts, was very wrong-headed, and would have inevitably led me away from the poetry in the poems.

So I chose to stay as close as possible to the originals. Fortunately, these poems were written in a very clear, idiomatic and conversational tone, which made them feel familiar to me. The poetry in them relied much more on the movement of ideas, concepts, images, emotions, as opposed to on some conventional stylistic idea of what was “poetic.” This made them a lot like the best contemporary American poems. So more often than not, I could stay very closer to the originals, which is what I feel translators should always try to do. All this work being inside those great poems taught me how to be a poet in a way nothing else could.

IC Earlier on you spoke of poets writing out of a space of aloneness. How do you choose what to allow into that otherwise-solitary space with you? The pact you made with Eugen Jebeleanu sounds to me like a very conscious allowance of another (albeit absent) person into one’s practice.

I’m thinking of your poem “Poem for Tony,” which begins with an acknowledgment that a certain person has left your thoughts, after occupying them for some time. The way that poems conveys an interiority of thought, a “very white moment of being alone without any loneliness,” is interesting in light of your thoughts about solitude.

MZ I wrote that poem during the two months I was living in Marfa, Texas on a Lannan Literary Fellowship. I felt terribly alone the whole time: it was a very powerful physical experience. Huge dramatic crying jags driving through the desert, listening to John Denver CDs, etc. Part of this was I was still grieving for the loss of my father, which had happened a year and a half earlier. And part of it was just missing everyone. While it was an incredibly painful time, it was also a useful one. In the quiet and absence I felt my feelings, which are just exactly as complicated and contradictory as anyone else’s, pushing into my poems and moving them in all sorts of ways. I am a very lucky person, and maybe part of my luckiness is that I can venture out onto this ledge of feeling alone and look down and up and experience it and know that it is possible to turn around and walk back into my life.