Matt Debenham is the author of the short story collection The Book of Right and Wrong. Here he and Emily Testa talk about Pee Wee Herman, un-earned endings, and the difference between suffering and conflict. 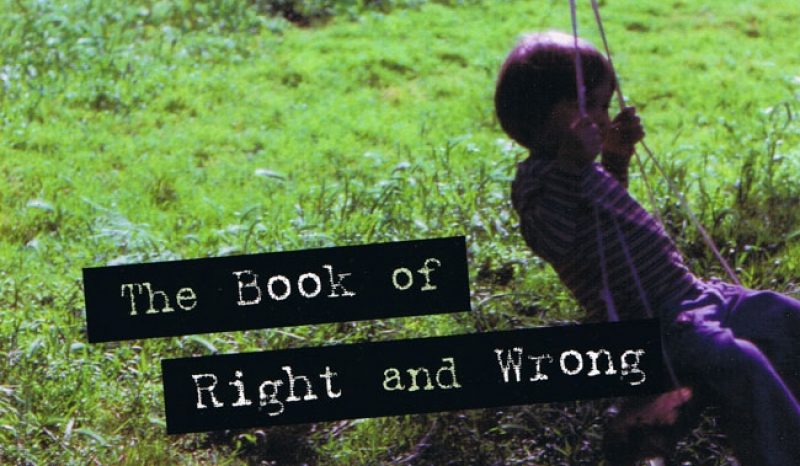 A few days before we were due to speak about his first story collection, The Book of Right and Wrong, Matt Debenham called and asked if we could reschedule. Sure, I said—after all, I’d done it twice already. But Matt’s reason trumps all possible reasons in all corners of the world: he had tickets to Pee Wee Herman. When we finally spoke (he in New England, me in the Lowcountry), our conversation meandered from MFA slurs to cheerless fiction. Still it was great fun because Matt is just as his stories are: charming, puckish, and big of heart.

Emily Testa Sorry for all the rearranging, I’m glad we could work this out.

Matt Debenham Me, too.

ET So how was Pee Wee Herman?

MD It was actually fantastic. I don’t mean to sound surprised, because I knew it was going to be good. But I wasn’t sure quite what to expect, and then we’re sitting in this—it’s a very nice theater—and everything’s very dark and then the lights come on and the stage set is exactly like the set from the TV show, but, like, three-dimensional and unbelievably bright. And the show was so much fun. The woman in front of us cried… .

MD … . with joy. She was a little hammered. That was the secret, I think. Most of the grown-ups were drunk. You could bring your drinks in from the bar in the lobby. I don’t know if that’s a new-ish thing since show tickets are so expensive, but practically everybody in there had a sippy cup.

ET Forgive my ignorance, but are we talking Paul Reubens, the genuine article?

MD Yes. In fact, several of the original cast members were there. Unfortunately Larry Fishburne was unable to resume his role as Cowboy Curtis. I guess he’s doing other stuff now.

ET I wish all interviews began this way. OK, first real question: In press materials, The Book of Right and Wrong is billed as “short fiction for people who think they don’t like short fiction.” Can you talk a bit about that?

MD Well, it was written by somebody who’s frustrated with a lot of short fiction. So many stories seem timid about plot, or outrightly, aggressively disdainful of plot or, say, character development—things that are really important to me as a reader. These things have sort of become the domain of the novel, and yet, so many of our first experiences with sophisticated fiction are with short stories. We read Edgar Allen Poe when we’re kids, and Shirley Jackson. But much of what makes those stories resonate is absent in more current short fiction, which seems to concern itself with atmosphere, and mood. Still, quiet moments.

ET That reminds me of a comment to Deborah Treisman I once read, where somebody asked what’s with all the doom and gloom in fiction. Why does fiction—and especially short fiction—have to be so sad? And she said, of course, that conflict is a necessary force in storytelling. The reason I bring it up is that despite the fact they’re centered around some fairly gigantic crises of conscience, your stories are a real antidote to the general pessimism of fiction.

MD You can thank my wife for that. We’ve been together since college, and when I started to write she’d say, “This is good, but it’s dark. And you’re not a dark person.” I think I had just assumed that for fiction to be serious and to matter, somebody had to die or have caused the death of somebody else, because that’s what suffering is, and fiction isn’t fiction without suffering. I didn’t understand the difference between suffering and conflict.

ET That must be a common confusion.

MD Even now, some of my favorite writers just never goddamn let up. I find myself taking breaks when it gets to be too much. Did they forget to be funny? Did they forget that most real people don’t live suspended in these torturous states? I’m always conscious of how a story might feel for a reader, because reading is what made me want to write in the first place.

ET How do you reconcile your concern for readers with your penchant for cliffhangers? Maybe we should call them something else since your stories aren’t serial. Let’s call them Big Scary Endings. In the middles of your stories, you situate quiet moments other writers might choose to end on, and then you end with less finished—and often more ominous—moments.

MD I studied with Amy Hempel at Bennington, and her great advice was, “Leave the reader and the story on the precipice.” Just that word implies that there’s something beyond, rather than an unspecific, wistful feeling at the end. Believe me, I love wist. But I also love to feel snapped to attention.

ET But what about those “cheap ending” comments writers the world around learned to hurl at each other in workshop? Do you ever worry about those kinds of things when you’re deciding to end a story with a swarm of killer bees attacking a small child?

MD I know. To me, “un-earned” really cuts to the core.

MD Still, a moment like the one you described just felt like the right place to end. And you have to trust your instincts.

ET It’s interesting to hear you name Amy Hempel as an influence. Knowing that, I can see you have one foot in this bizarro-world she inhabits, but the other one is planted very firmly in realism. In fact, it’s kind of a gleeful realism. And your characters tend to be transfixed by their adolescent insecurities.

MD I think that comes from me. I was the kid who looked normal but said really odd things, just a weird, unpleasant sucker punch of a kid who was always talking about hobbits and stuff. And even now, even though I’m 40 and I have a bunch of stuff going on, at least once every day I’m struck by this feeling of, “Am I still thirteen?” And I do tend to write about lower middle class environments because that’s what I know. I don’t know much about country clubs or prep schools, or even academia. I have an MFA, but I don’t teach at a college. I’m probably not going to write a university novel.

ET You approach most of your stories from the side, too. We meet everybody just before or just after the giant thing happens.

MD That’s an artifact of how long my early drafts tend to be. I was telling somebody the other day that I went into an MFA program thinking I’d walk out with a book contract in hand. And in my most logical moments I knew that wasn’t how it was going to be, but for a while was really resistant to the idea that my writing needed to change, even though it definitely did.

MD And then I took a seminar with Mary Beth Hughes, and she decided she’d only let me submit 20 pages a month, and it had to be more than one story. So I had to relearn everything. At first I’d write my usual way and then choose the most interesting moment and rebuild the story around it. I guess it is kind of an oblique way to approach storytelling. Also, I’m sure my writing is affected by the impulse I’ve always had as a reader, which is to wonder what happens after the story ends. What about the next day? How does that go, exactly? I wonder whether the lovers still love each other, sure, but also how they divide small household tasks. I’m into finding out about after the after.

ET Last question: can you tell me a bit about Ohio State’s literary prize? What was it like to go through that publishing process?

MD Well I submitted to manuscript contests beginning in 2007, and I didn’t get anything, so I retooled the entire manuscript and sent it out again in 2008—still nothing. Then, in 2009, Ohio State called me, and though I had planned to be a totally cool customer, I cried. Like, right there on the phone.

The Book of Right and Wrong is available now from Ohio State University Press.