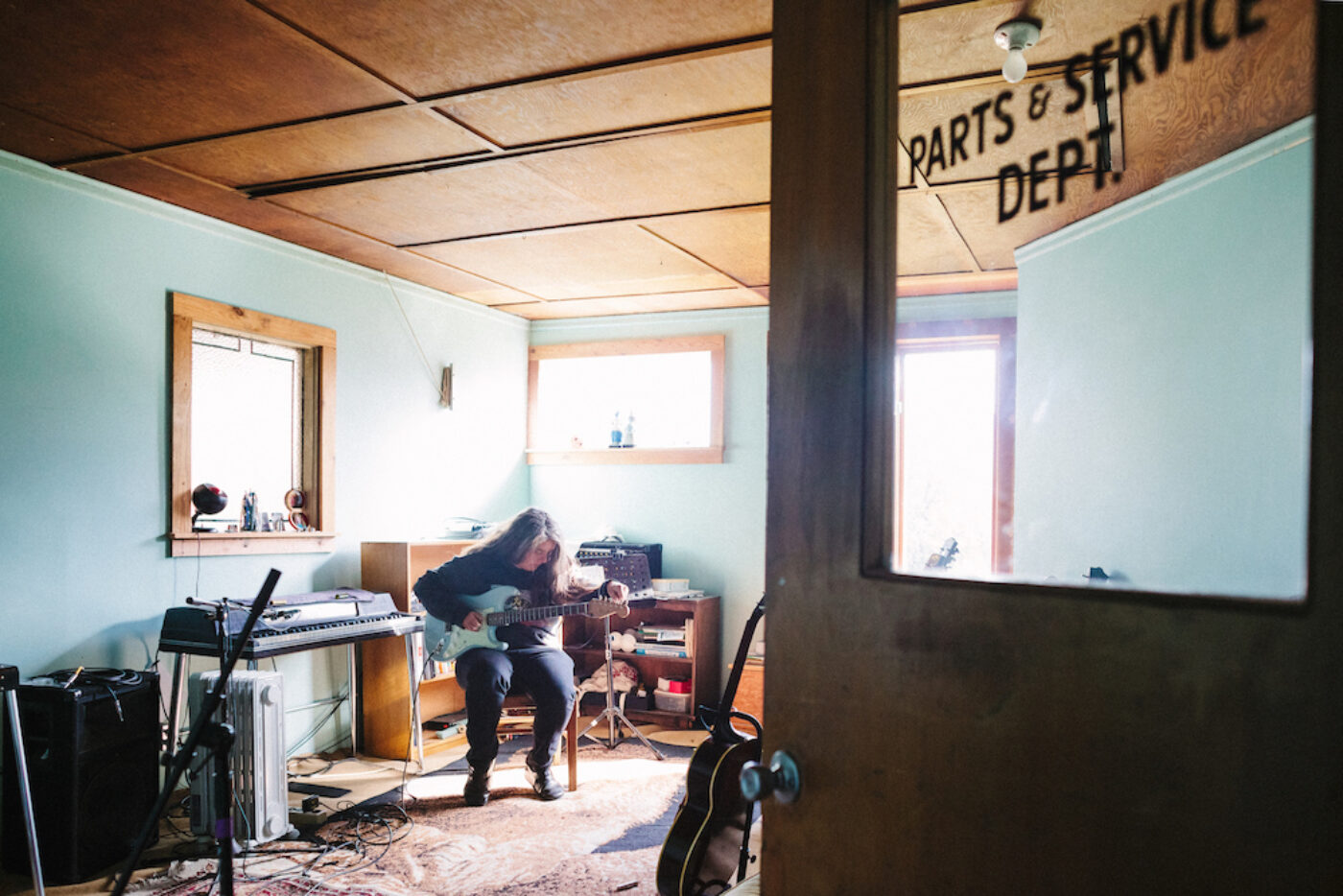 Marisa Anderson’s compositions often begin with a simple pulse on a single electric guitar and then slowly and mesmerizingly move in different directions. A chooglin’ rhythm will give way to a stark silence or pause; an initially unaccompanied slide guitar can call up an electric piano for a brief duet; and what sounds like an expository improvisation will later reveal itself to be part of an intricate and precisely repeated melody. Listening along, too, you can find yourself pulled between calling up memories of places and people that have gone by and focusing closely on the small shifts in tone and texture of the music unfolding in front of you.

On her 2013 Traditional and Public Domain Songs, Anderson included a beautiful rendition of the hymnal “Uncloudy Day.” That version has a lot in common with the one recorded by Willie Nelson in 1977, but when I first listened to Anderson’s new album Cloud Corner, I thought of the Staple Singers’ earlier, foggier recording. There, Mavis Staples’s deepening voice and Pops Staples’s tremolo-washed electric guitar cast shadows and lightning over the hymn’s promises of a land free from storm clouds. Such a clear day has not yet come, so Anderson’s music continues to respond to the conditions at hand. 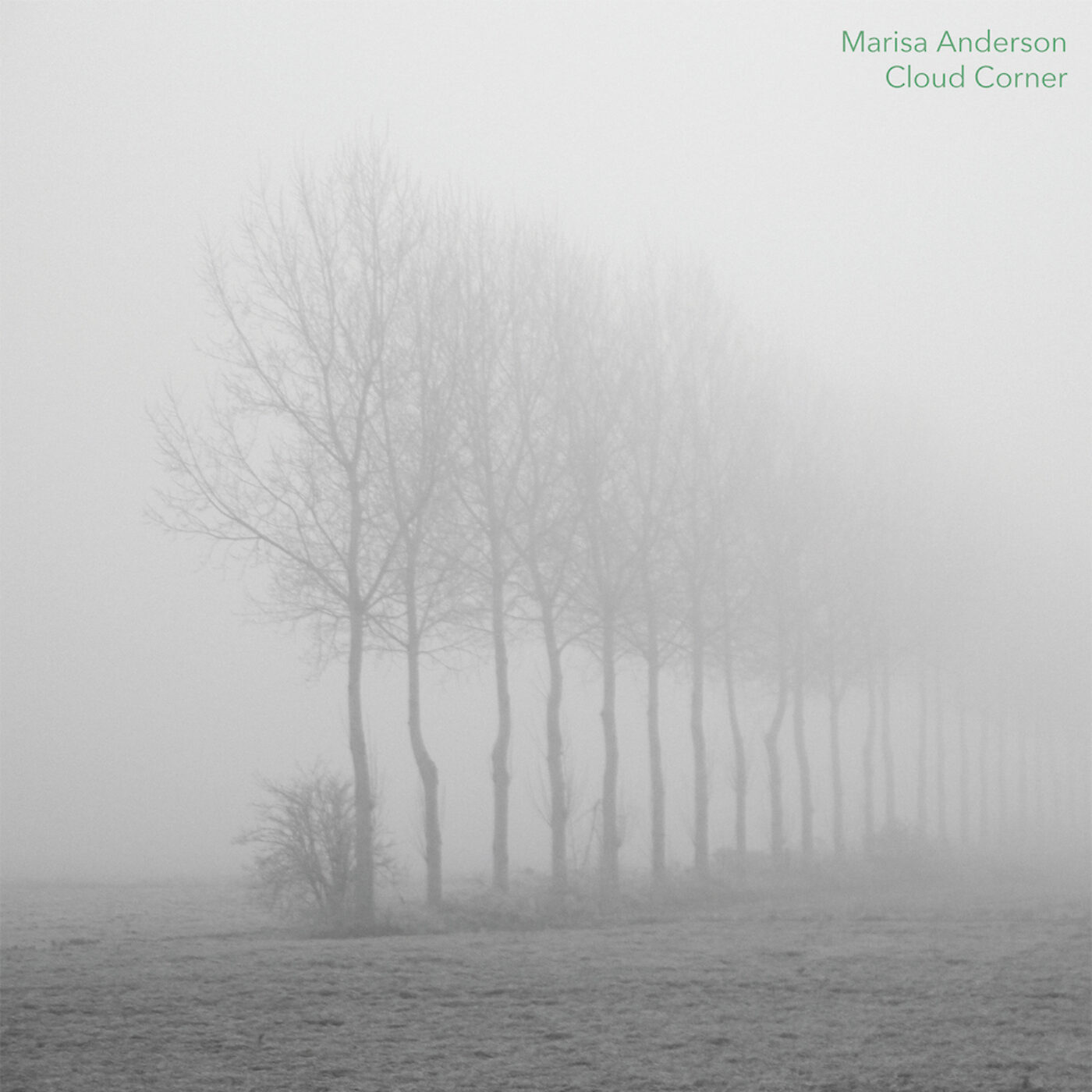 Marisa AndersonThe recordings for Cloud Corner began as kind of a happy accident. I started working on the record in January 2017, which was an unusually cold month that year. I have a studio in my garage but had to move into the house to record because it was too cold. The electricity in the house is not very clean, which gave me a lot of difficulty in getting a good sound out of my amplifiers, so I ended up getting a different amp—an Ampeg v-22, which is a huge, loud beast compared to the small Fender amps I usually use. I was working in a couple of different rooms in the house, setting up on the fly when nobody was home and just trying to capture some ideas, thinking I’d come back to the recordings and flesh them out once the weather calmed down. I wasn’t really paying much attention to the rooms I was working in, and I ended up getting these really beautiful, very clean tones bouncing back off the walls, long sustaining notes that lingered in the air. I thought I was making rough drafts, but the sounds were so beautiful I ended up keeping them. Those tones really defined the record moving forward.

Compositionally, this record is more textured than layered. I consider a few of the songs to be duets, and a couple of them are defined by ostinato lines that allow for many instruments to sing in one voice. Among other things, I was inspired by breath, air, light, wind, clouds, and fog, as well as ideas about clarity and obscurity.

MBDid setting up on the fly also mean composing on the fly?

MAMy records have always been largely improvised, or spontaneously composed. I generally have a backlog—a vocabulary of sonic colors, melodic fragments, or technical puzzles I’m interested in solving. When I go to record, my intention is to get to the core of this vocabulary. I play until I get to the place where these ideas or inspirations feel clearly expressed. Usually I’m not thinking in terms of song or structure or arrangement. That comes much later, if at all.

MBThere’s a cloudiness in how the overtones overlap and mix with each other, and how they emerge from the buzz of the big amp. Sometimes it sounds dense, or even ominous, on compositions like “Slow Ascent.” But clear and resolute-sounding melodies also form out of thick blocks of bass notes, like on “Angel’s Rest” or “Sanctuary.”

MAWhat is the sonic equivalent of a cloud? And how does a cloud seem to both hold form and change shape? I was working a lot with the technical puzzle of trying to make a piece of music that moved but didn’t move, simultaneously tangible and ephemeral. I think I got the closest to realizing that intention with “Pulse.” What about the clouds of spray off the back of an ocean wave? I was trying to conjure those using reverb and tremolo throughout the record. And yes, with “Angel’s Rest” or “Sanctuary” I hoped to evoke the form that arises and dissipates even as it is taking shape.

MBYou make such varied use of the electric guitar. Things like distortion, tone, amplifier noise, tremolo, or reverb can often feel like sonic tricks. But in your compositions, those sounds are an essential part of how you’re mixing melody and rhythm with a single instrument.

MAThis record is very textural and very tone-based. These were the starting points for me creatively. I also used silence and space as a voice in the compositions. Playing rhythm and melody at the same time is key to my guitar technique. I think of my thumb as the drummer, my first couple of fingers as inner voices/melody, and my ring finger as ornamentation or additional emphasis. In the same way that a drummer works for four-limb independence, I work for four-finger independence.

MBYour 2013 album Traditional and Public Domain Songs, which was just reissued this past year, translates songs that many of us are accustomed to hearing in different contexts—for acoustic guitar, piano, choral arrangements, maybe even sheet music—into arrangements and interpretations for unaccompanied amplified guitar. I love how on the Bandcamp version you’ve added the lyrics to these traditionals, so you can follow along not only to the melodies of “The Battle Hymn of the Republic” or “Pretty Polly,” but also think about how you’re evoking words sung by the human voice through the expressiveness of the guitar, or maybe even commenting on the lyrics in a way that singing them more directly might not have allowed. All these different histories smash up against each other, coming from one guitar and one person.

MAI followed the lyrics when I recorded the songs, so the voices were definitely in my head as I was playing. A lot of these melodies are older than the words we currently affix to them, and I was excited by the challenge of showing these melodies in a way that illuminated how powerful many of them are. The record is mostly church and state songs, propaganda, so of course the melodies are the strongest!

MBOn the albums since, you’ve added instruments beyond the guitar so that the songs almost become performed by bands or orchestras of one. The pedal steel and Wurlitzer piano on 2016’s Into The Light looked, among other sources, to music of the American Southwest. On Cloud Corner, you play the Andean charango and the Mexican requinto jarocho, as well as referencing West African guitar music. How did these instruments find their way into your music and the album?

MAThe charango was a gift from a friend who brought it back from a trip to Bolivia many years ago. It’s an instrument I’ve had around for a while and enjoyed playing, but it never had a spot on the earlier records, mostly because the timbre of the instrument didn’t fit the sonic palette. I use it on the song “Lift,” on the new record, and it comes in as a final highlighting voice in the repetitive riff that makes up the bulk of the song.

The requinto jarocho is an instrument that I’ve been slowly learning over the past year. It is traditionally used in Son Jarocho music, and I’ve been learning some songs from that tradition on both the jarana and the requinto. On the record, I use it on “Sun Song” and “Lift.” “Sun Song” is a solo requinto improvisation, and on “Lift” the requinto is the main voice of the song. I’ve had that riff for years, trying to build a piece out of it, and when I transposed it onto the requinto it fell perfectly onto the instrument.

MBNot only are the songs interested in evoking surfaces, weather patterns, or clouds and water, they are also often titled in memory of or in tribute to specific places. On the new album, there’s “Sant Feliu de Guixols,” named after a seaside town in Catalonia, and “Angel’s Rest” recalls a specific hiking trail in Portland. How do you think of the music and its interaction with specific places? And when you’re out on tour, how do these compositions dedicated to one place change over time and in response to where you’re performing?

MAI’ve been on the road in one way or another since I was eighteen years old (I’m forty-seven now), so that’s thirty years of people, places, skies, horizons… I give the songs titles mostly to keep the ideas that inform them separate from one another. If I didn’t label them I’m afraid I would try to put all of my ideas into every song, which I don’t think would sound very good! I name the songs after what I know, experiences I’ve had, places with evocative names or names that have personal meaning.

The songs always change. Night to night, audience to audience, they reveal themselves slowly over time. I feel like the recordings of the songs are simply the jumping-off points, the beginning of what they teach me. I stop playing songs when I stop being interested in them.

Cloud Corner is out now on Thrill Jockey.

Michael Blair is the coauthor, with Joe Bucciero, of a book about Young Marble Giants’ 1980 album Colossal Youth and a contributing editor at BOMB. 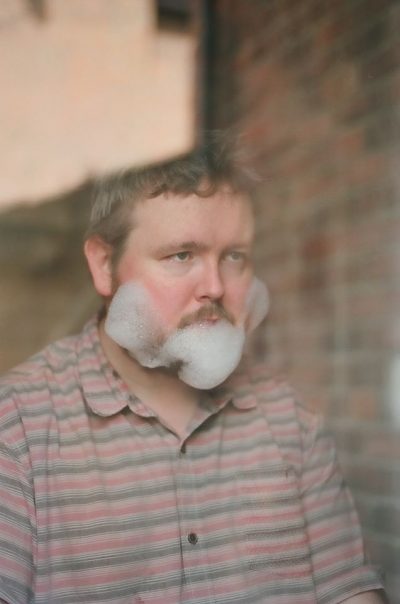 On being nothing, looking outward, and the obstinant relevance of that popular art form, song.