Mariana Valencia on her sculptural arrangements of bodies and objects, teenagers in parking lots, and Bushwick sunsets. 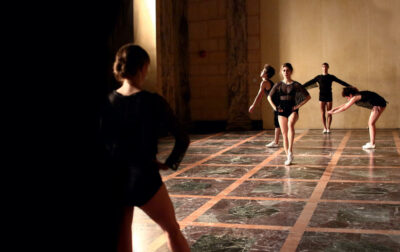 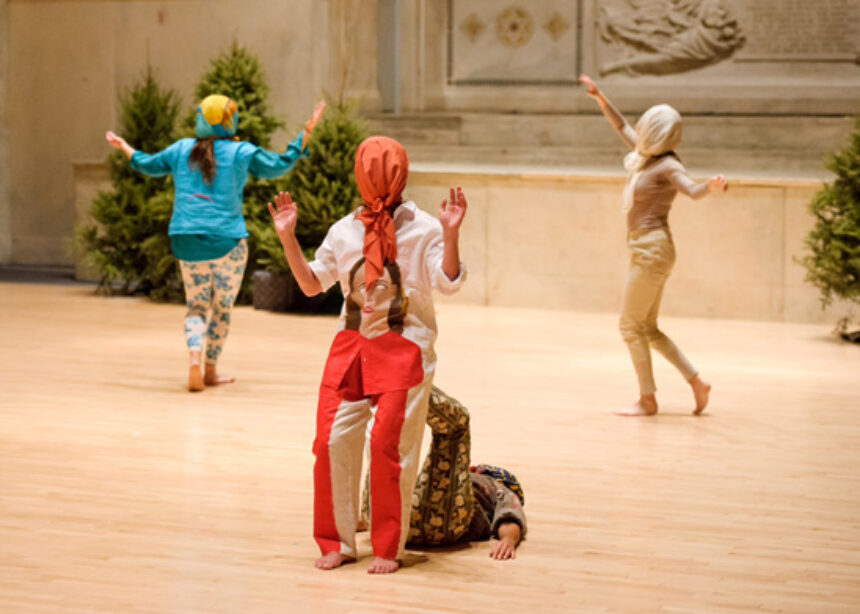 PHRESH is a word Mariana and I invented to talk about the things we like, things that are crisp, playful, and cool. My ADIDAS original high tops are PHRESH. Mariana’s collection of succulents on her windowsill are PHRESH. Like #hashtags, PHRESH carries embodied meaning, and defines itself the more often we use it. Referencing the conventionally spelled nineties term of the same name, PHRESH is fresh’s contemporary, queer sister. It is the objects we like to wear and the things we like to do. PHRESH is ours for the taking and the making.

Mariana’s installation and dance work is undeniably PHRESH and, like the term itself, her pieces resurrect embodied histories and codes while inscribing vibrant new happenings in the church attics, galleries, and theaters they occupy. Her work—while full of objects and colors and bodies—functions as a visual palette cleanser, deliberately constructed to create room for our digestion of its multifarious elements. Her work is a gateway to an unknown world that is controlled yet wild, one in which every shape, movement, sound, and object is equally understandable and mysterious.

Mariana and I conversed on her roof where we discussed #milk, #parkinglots, and #longbodies.

Mariana Valencia The name of the dance is Milk—well the name of it is M.I.A.M.I., but it’s an acronym. I secretly want this dance to be called Miami but I wanted it to be a whole sentence so we decided Milk is a Mother’s Idea was the best acronym.

Effie Bowen How did your process with this dance begin?

MV We were thinking about parking lots as a place to be.

EB To hang out?

MV Yeah. The parking lot is where you hang out, you can make out in the back of a car, you can just be alone. It’s a little angsty. It’s a place for a certain age of people where they locate autonomy. Teenagers’ safe space is a parking lot.

MV It’s not welcoming. It’s asphalt. There’s maybe one light. It can be really sunny there or really dark. Cause there are no trees except the landscaped ones in between the cars. I suppose the parking lot kind of sounds like Milk is a Mother’s Idea. Like someone at a parking lot would say, “Ugh, milk is such like a mother’s idea.” Cause you’re so over your parents you just want to be hanging with your other teens.

EB To me, Milk is a Mother’s Idea is super sci fi. It illustrates something I would imagine in a feminist science fiction novel: A world in which women don’t allow natural bodily processes to occur but instead, construct them. They conceive milk—it’s about their desires and their agency.

MV Yeah. It’s feminine. Milk is very feminine. And we all identify as women in the dance.

EB And in the world.

MV We identify as queer women which is another thing. We’re all queer women.

EB When did you start this project?

MV Two years ago. This is the first dance I ever made with Lauren and I was trying to get to know her. I’ve made dances with Lydia for a long time. Lydia and I are a similar body type and height and this thing started happening in my dance where Lydia and I were very exacting twins. We wanted to glamour the shit out of the audience. We wanted to be very visible together. We were obsessed with each other but then that also meant that I was obsessed with myself and needed to be watched and the best way I could be watched was to watch this other person who needed to be watched too. This dance is a break from those duets; It’s about meter, it’s about temper, it’s about shape and how three bodies can experience those things with each other. 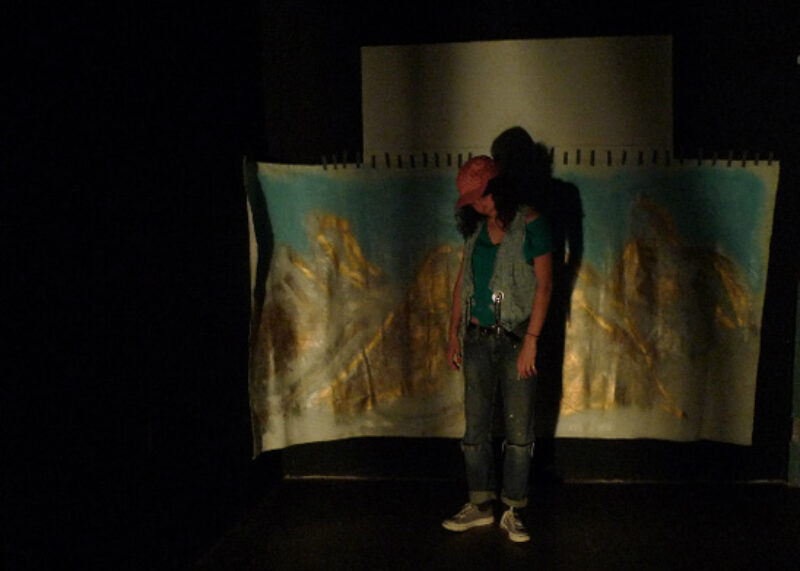 EB Were there difficulties bringing in someone new into that duet space?

MV I realized Lauren was a person I needed to develop language for to allow her into the process. The way I conveyed my ideas became challenged because I was inviting someone into a world they had no history with. I gave Lydia and Lauren the parking lot as an image just because it is so vast. There’s so much potential in an idea like that, it’s referential. The other thing in my casting of Lauren is that I was looking for someone long.

EB When you’re arranging the trio, were the sculptural elements of Lauren’s body a deciding factor to include her or something you realized you liked after the fact?

MV I noticed those things after I decided she would be in my dance. I didn’t think of her as long until we were together in rehearsal. I would say, “I’m going to make you feel really, really long.” The dance was made from shapes and how they can stand next to each other and how three people can meet and relate.

EB Yeah, at the end it’s this beautiful moment where you guys are trading off carrying one another—so two people carry one person and it flips and then keeps flipping—and, it’s really funny. People in the audience when I saw it at Dixon Place were laughing … but it’s also sad and deep and exhausting. But it’s not just a dance that repeats itself until everyone is exhausted.

EB It’s not all sad or all funny. Each person is involved in directing the action, right?

MV Mhm. There’s a grid on the floor in our minds and each person gets carried through their designated square, basically, and we communicate about how to move that person from their square to the next person’s square. We’re moving logs, that’s the imagery I was using to describe it—lumber. We’re just workers and we’re moving lumber and that’s how it should feel to do that action. Our time is for us—there just happens to be an audience right there.

MV Yeah, less glamour. It’s about being witnessed and so I wasn’t expecting anything of myself because I didn’t know what each repetition and performance of this work was going to give me. I know what happens inside of it but I don’t know for how long … I don’t know what has more weight to it because we took more time on it. It’s about witnessing our dance ourselves and be witnessed doing it.

EB How does your formal installation work affect or impact this piece or maybe your other dance works?

MV I recently did that picture project. I painted a mural at the Movement Research Festival. It was a backdrop and I posed people in front of it and took pictures of them. The images are based off of El Hoyo Maravilla. It’s a book of photography by Janette Beckman, and linked to youth, gang—

MV Yeah, parking lots, posing. And holding space for what you represent. These gangs have really cool outfits on. It’s in 1984, the girls pluck the shit out of their eyebrows and they’re so cool. They’re just so cool and they believe that they are the only people in the world. That kind of installation work usually bleeds into my dance work because in some way or another I’m exploring a similar idea, it’s just being manifested with people or with items. Like that installation I made at Bodega where there was a bunch of stuff …

MV To me they were posing. The idea for that was to pick everything that’s bright in my house, anything that was a color that would look good next to another color and to arrange it so they look good all together.

EB Were the objects posing just due to the nature of themselves as objects and then you’re just arranging those poses?

MV Yeah, I’m making them work. I really love color so in that Bodega installation I used a lot of color. I use my installations as research for what works currently in the movement-based things that I do. 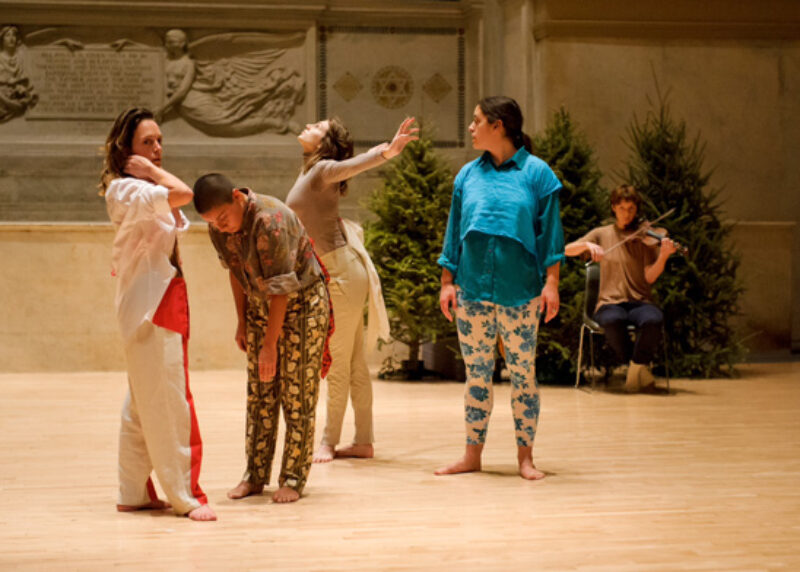 EB Does your process come from a really different place than it did in college?

MV I almost didn’t even identify as a dance maker in college. I identified as a dance history person.

MV But I mean, I made dances, and my thesis was a dance that I made, but it was very much about, what can I read in a book about dance? I didn’t grow up dancing in a studio so my first introduction to dance was at Hampshire College and so I think because of that non-history with dance, I wanted to know so much about it so quickly.

MV When I took my first comp class, I was a bit excited and intimidated by some of the people I would see in the class because they’d be generating movement that’s obviously referential to their jazz training or whatever kind of movement exposure. I was like, “Oh, that’s something I can recognize.” And it’s this person putting it in space but it doesn’t feel like that’s that person’s movement. That’s the movement they’ve learned. And so because I didn’t have that, I felt like this medium is exciting for me because I don’t have any baggage with it or something. My movement is my movement.

MV I like that people have histories with their bodies and dance. Lydia danced when she was a kid and I’m sure Lauren did too, I don’t really know, maybe ballet or something?

EB She did competition dance.

MV That is hilarious. Um. So … I lost my train of thought because of competition dance.

MV I like that my people have histories and I like that I don’t share that history with them. I like that though they have histories, they can still delve into my movement-making, my thought process, and become clean slates for me. It’s really hard to unlearn your body. I’ve been taking Alexander technique, and that learning, the mechanics of what a body can do and what you can unteach it to do, kind of got into this dance a little bit.

EB What are you unteaching your body?

MV How not to do this, like right now I’m like crunching my neck. Like, how to just try to be. I don’t know if you noticed the music in the dance, do you even remember it?

MV It was scales, I think the F minor scale on a keyboard.

MV Yeah, no, there wasn’t music throughout, but it would come in and out, and the way that I imagined that sound was because I have a neighbor who practices music, and you can hear it sometimes.

EB In New York. What else do you have going on? What’s coming up?

MV I’m making a new dance … I have an off hours residency at Chez Bushwick this summer so I will be rehearsing very late at night and in the spring, I have a Studio Series at New York Live Arts.

MV But yeah. Sunsets at Chez Bushwick are exciting.

EB Do you have final thoughts?

Mariana Valencia’s new work will be performed September 12th and 13th in the Chez Bushwick AIR show at Center for Performance Research and in March 2014 at New York Live Arts as a part of her Studio Series residency. Follow Mariana’s work at her website

Effie Bowen is a performer and contributor to Interview and BOMB Magazine. 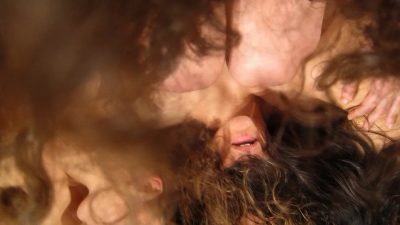