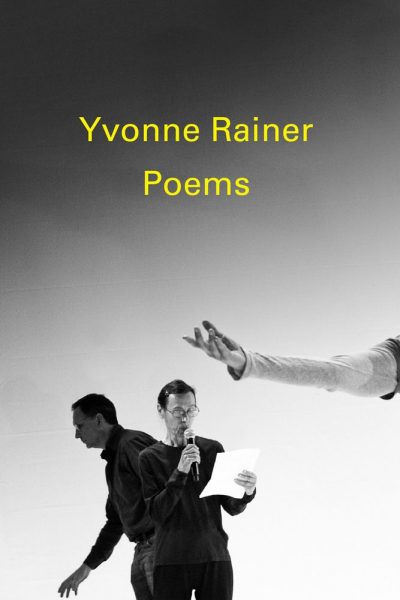 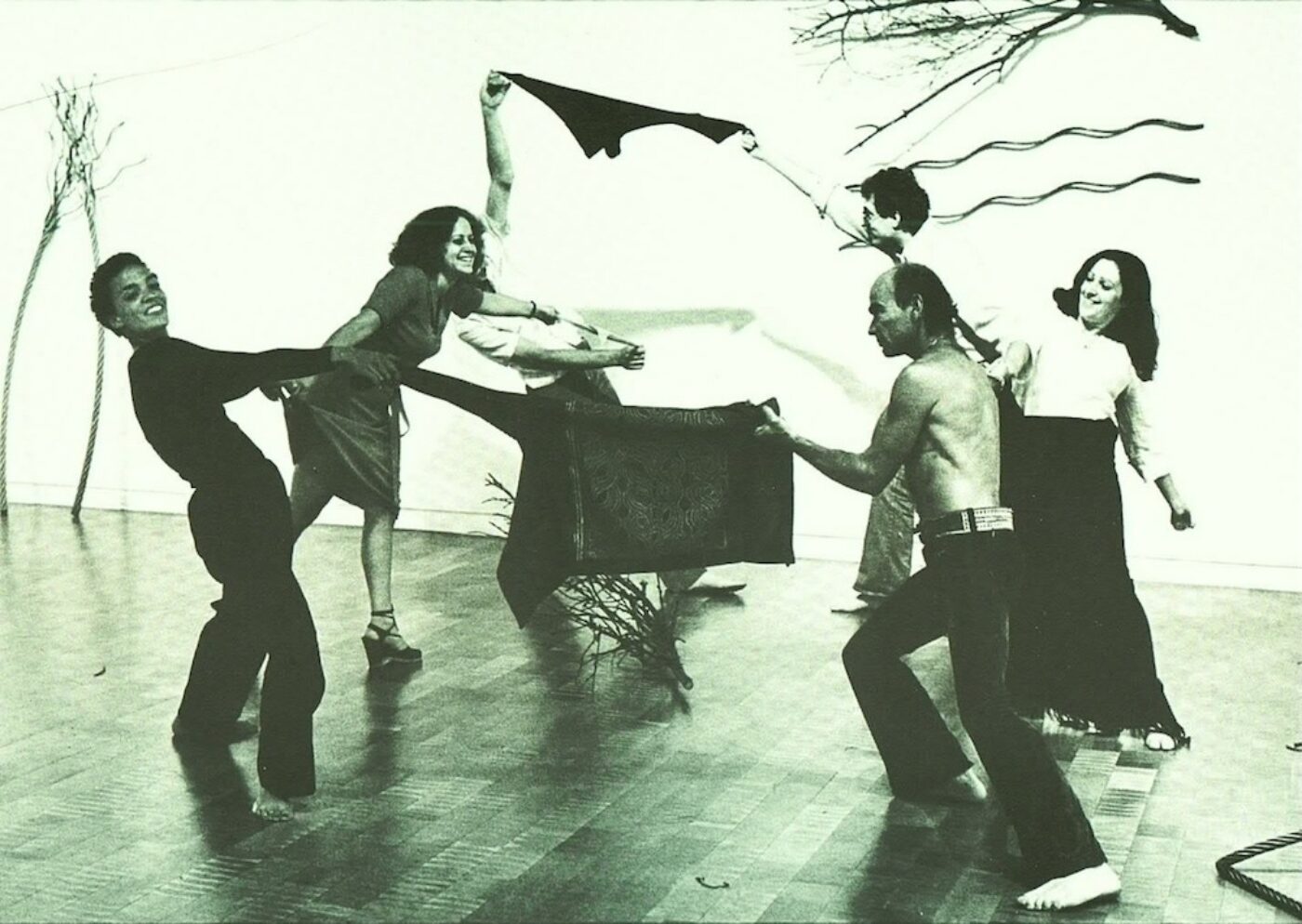 For over four decades, sculptor and performance artist Maren Hassinger, has created powerful images that refer to nature as a complex, psychological space for political and personal transformation. Early pieces resembled stark groves of bare trees; wire rope forms twisted and bent from the heat of her welding torch. Lately her materials have included the underfoot and overlooked: trash, leaves, boxes, and piles of newspaper. Dance and movement are seminal to her work, and from her earliest pieces on, the viewer must circumnavigate and interpret the space, whether it’s a freeway overpass, a pink path, or a crowded, small room.

Maren Hassinger…Dreaming, a retrospective of her works, opens this spring at the Spelman College Museum of Fine Art in Atlanta, “the only museum in the nation emphasizing art by and about women of the African Diaspora,” as the statement on the institution’s website reads.

A native of Los Angeles, Hassinger’s work was included the traveling 2011 exhibition Now Dig This! Art and Black Los Angeles 1960–1980, and in Radical Presence: Black Performance in Contemporary Art in 2012. A residency at the Studio Museum in Harlem brought her to New York City in 1983, and she’s been in the Northeast since, where she raised her two children. Her daughter, Ava Hassinger is also an artist, and the two work collaboratively under the name “Matriarch.” Hassinger and I met in her apartment on Malcolm X Boulevard, in Manhattan. 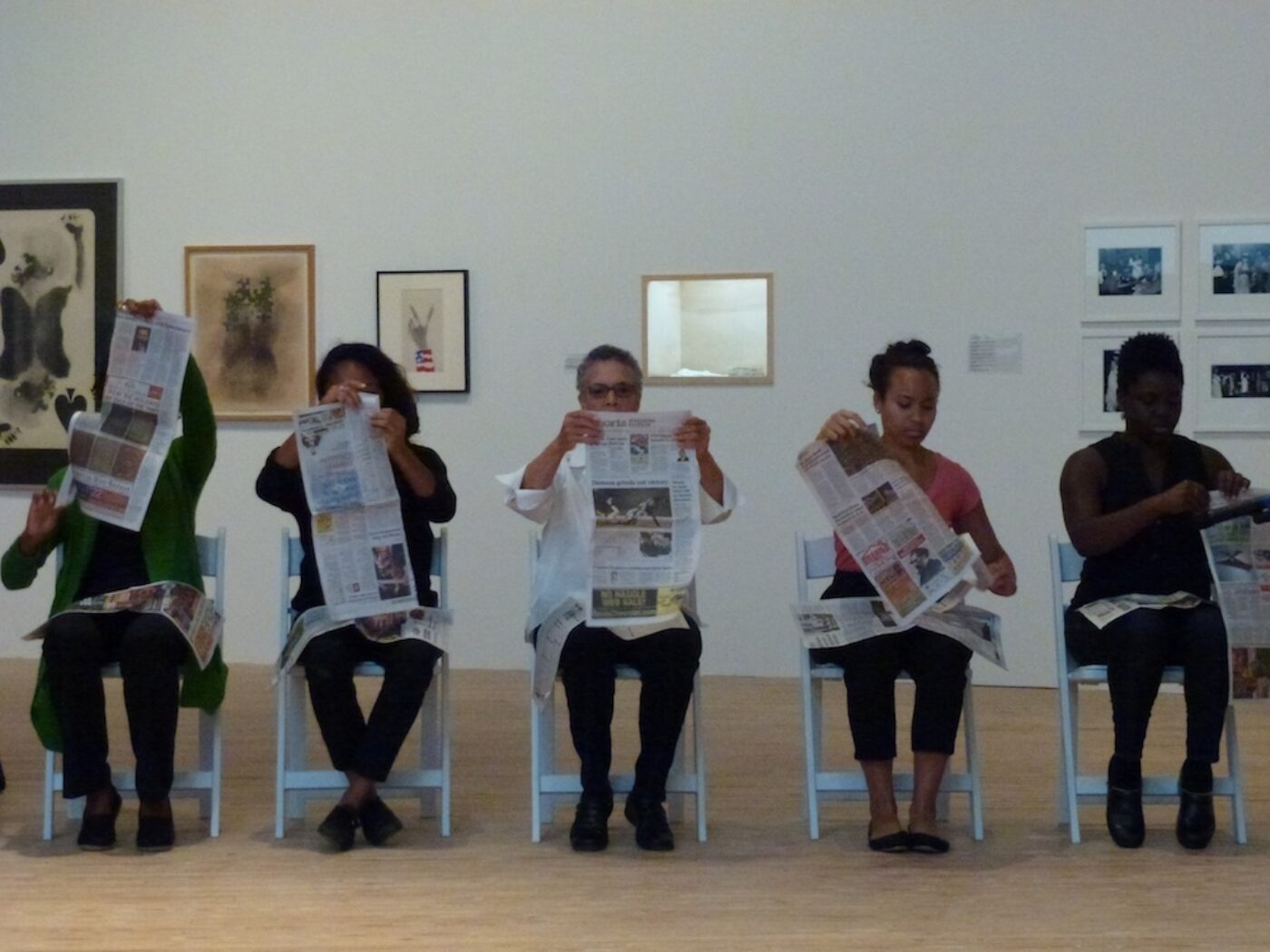 Mary Jones What is the personal significance of your upcoming retrospective?

Maren HassingerSeeing all these pieces together and the evolution of my ideas, especially about nature. The earliest piece is from the mid-1980s and then the show moves to the larger, more recent performative work that expresses my philosophy now: getting beyond the strict nature thing into something else, something about social positions.

At first when I referred to nature, it was about how I thought nature was on its way out. I was very influenced by Walker Percy at the time—I liked how in Percy’s work there actually was no nature. Nature only survived on the golf course or other artificial spaces created solely for the rich. Now, I’m using it to talk about equality. Nature is used as form, like a piece of architecture, not ecology.

MJYour work Pink Trash has had multiple reincarnations, including the decor of your apartment, which is brimming with inflated pink plastic bags! There have been many political interpretations of this piece, most alluding to the sidelong reference to “white trash.”

MHAll this pink work began when Meghan Williams asked me to do a show with her fellow CalArts students in Lynwood, California. in 1982. It was a very blighted neighborhood, where houses had been torn down to make room for a stalled freeway project, and it felt like a weird ghost town. I decided to make some pink paths through this desolate landscape. I remember the dead grass and how the pink popped against the brownish green as I was putting down the paint. So, no, not really, it wasn’t political, it was more about color theory. Nobody gets that. 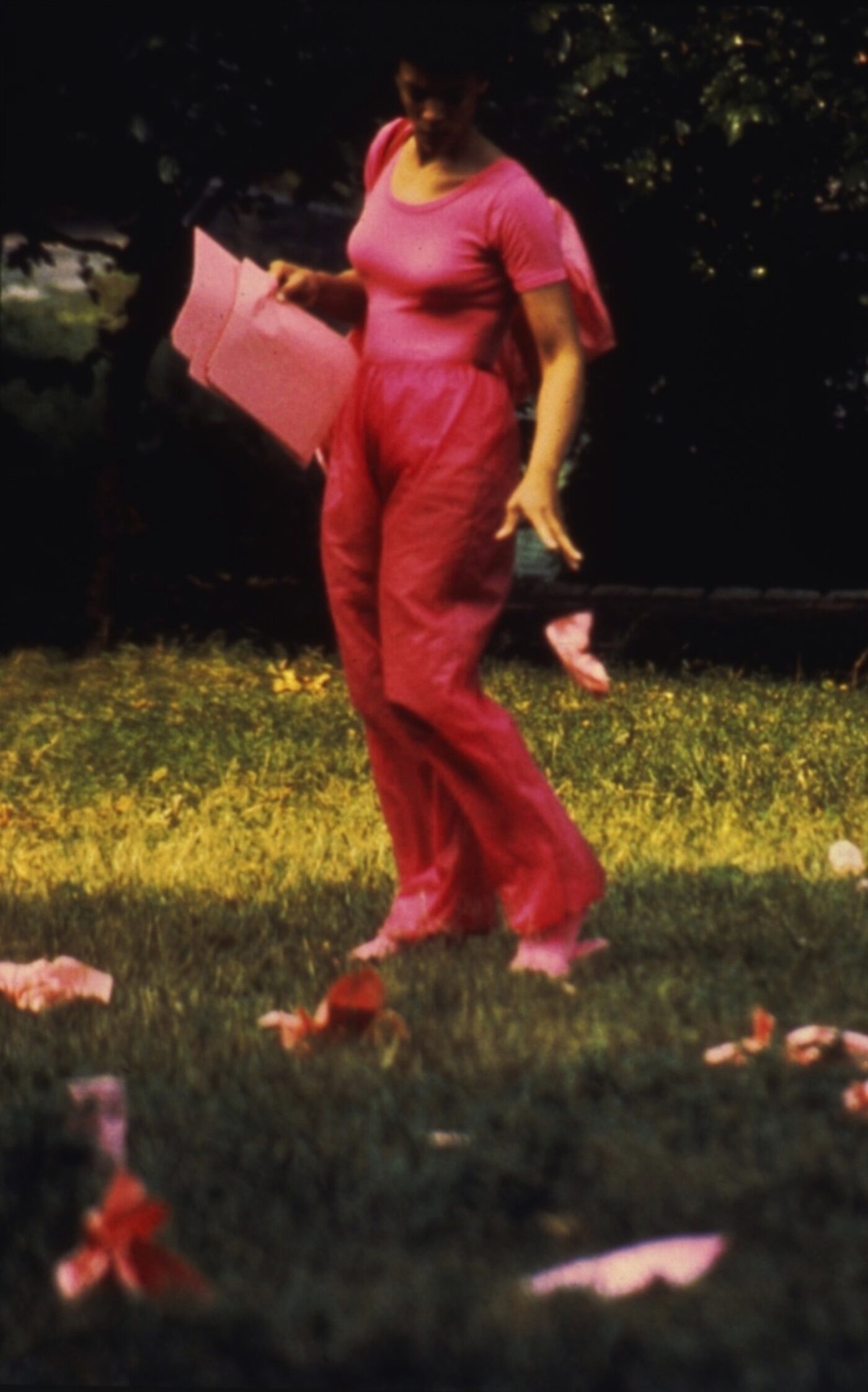 MJEven if the formal aspects give the work its character, do you welcome the political readings as well?

MHYes. Politics are always there, it’s inescapable, if you’re going to be a really good artist, it’s got to be there, because it is there. I always giggle when I tell people that to do the piece, I had to first remove all the white trash.

MJWhat about ecology? You’ve used trash in your work for decades and now you’ve got boxes, sometimes stacked to the ceiling, at other times explosively uncontained. Do they represent urban detritus?

MHAll the pieces with boxes are about our gross need to consume, and where it leads us. Where is the bleeding heart in all of this? I don’t think my work has so much to do with ecology, but focuses on elements, or even problems we all share, and in which we all have a stake. Maybe that’s an ecological statement, but I want it to be an emotional statement. I want it to be a humane and humanistic statement, and maybe that sounds like a hippie carry-over statement from the ’60s, but frankly I think it’s what we need right now. Martin Luther King spoke about it. Even Rodney King said it! “Can’t we all get along?” as they were beating the shit out of him, and then there’s Nelson Mandela, saying how he could not forget but he could forgive.

I really want to get back to some of the issues of the original Civil Rights Movement, where there was a vision of the future, one of equality. I want to be part of that equality and to make that a now situation, as opposed to something way off in the distance. I want to concentrate on issues and environments where we all have a common interest. This is why I’m very tired of the conversation that goes on among many artists of color about being oppressed and victimized. Although that may very well be the case, at this point talking persistently about victimization is not a conversation that I want to hear anymore. I was recently talking with a friend about cultural ecology; I think that is an appropriate description—we can redirect our voices from oppression to the retelling of humans functioning together. 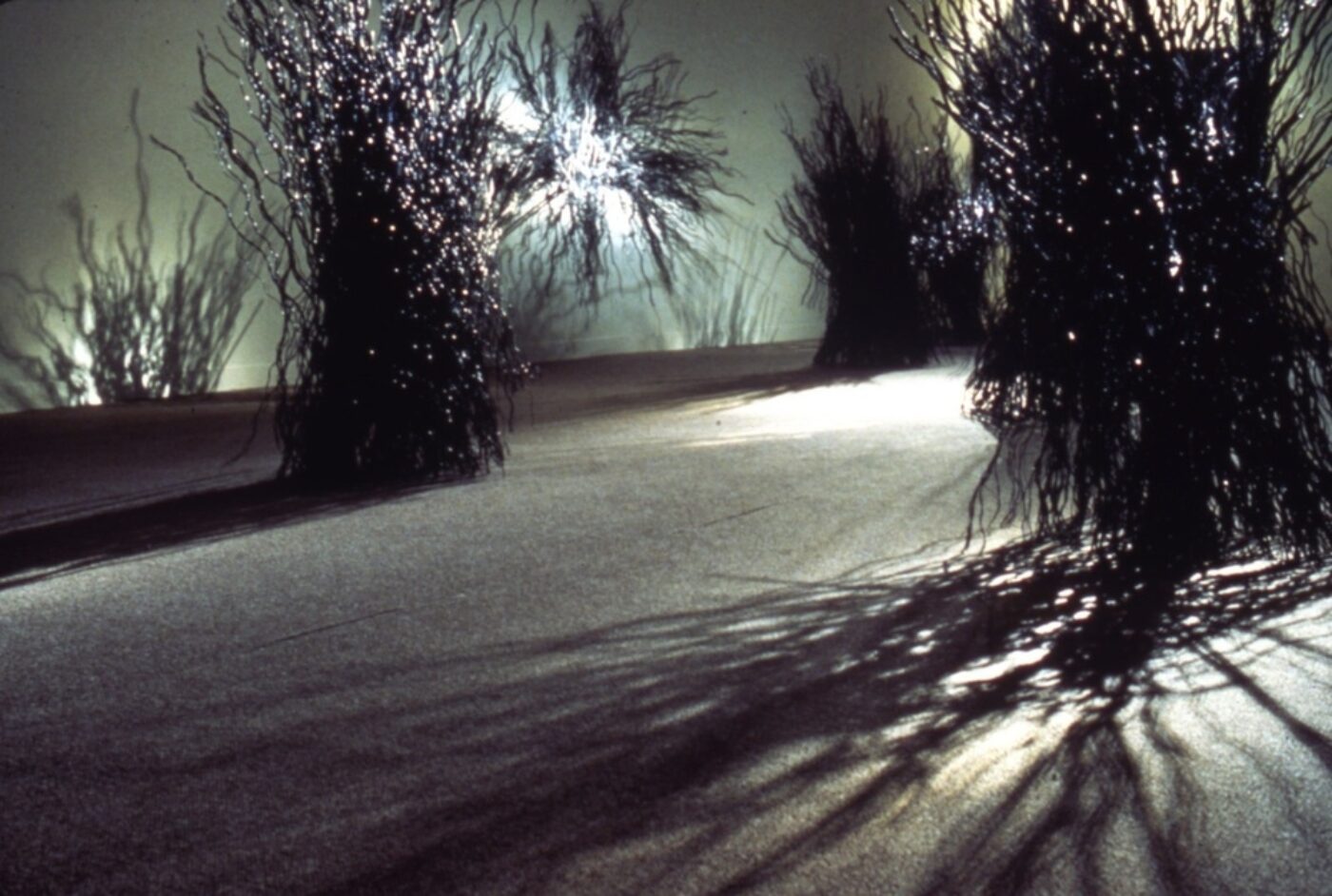 On Dangerous Ground, 1981. Photo by Adam Avila. Image courtesy of the artist.

MJWhat about Malcolm X, and your work Message from Malcolm at the 110th Street subway station for the 2 and 3 lines?

MHI like Malcolm X’s writing because his feelings represent the culmination of a difficult life. He came to his ideas through struggle and taking a hard look at his circumstances and the circumstances of black people in this country and elsewhere. In my piece, there are several texts that describe why I like him. They deal with universal brotherhood and taking responsibility for one’s own future.

MJLet’s get back to equality as part of your conceptualization of nature, and the piece you’re currently developing about the sky. How did you begin?

MHIt was late afternoon, storm clouds were gathering, and I was looking out this window here on the sixteenth floor. Some planes were coming into La Guardia and others were leaving, it was like a rush hour thing, many more planes than usual. When bad weather is coming quickly, they have to get out really fast. I watched as they flew over the middle of Manhattan, right over the Empire State Building, then over Harlem and disappeared into a cloudbank. It was like a ballet. In this apartment it was really loud, one after another, this booming, repeating sound.

The other thing about the sky is that it’s our canopy. To me it seems so potent. I want to capture the images in time, include the sounds and add a voiceover that I hope is poetic and of interest. If we can share the sky we can share other things. I want it to be a very positive message. 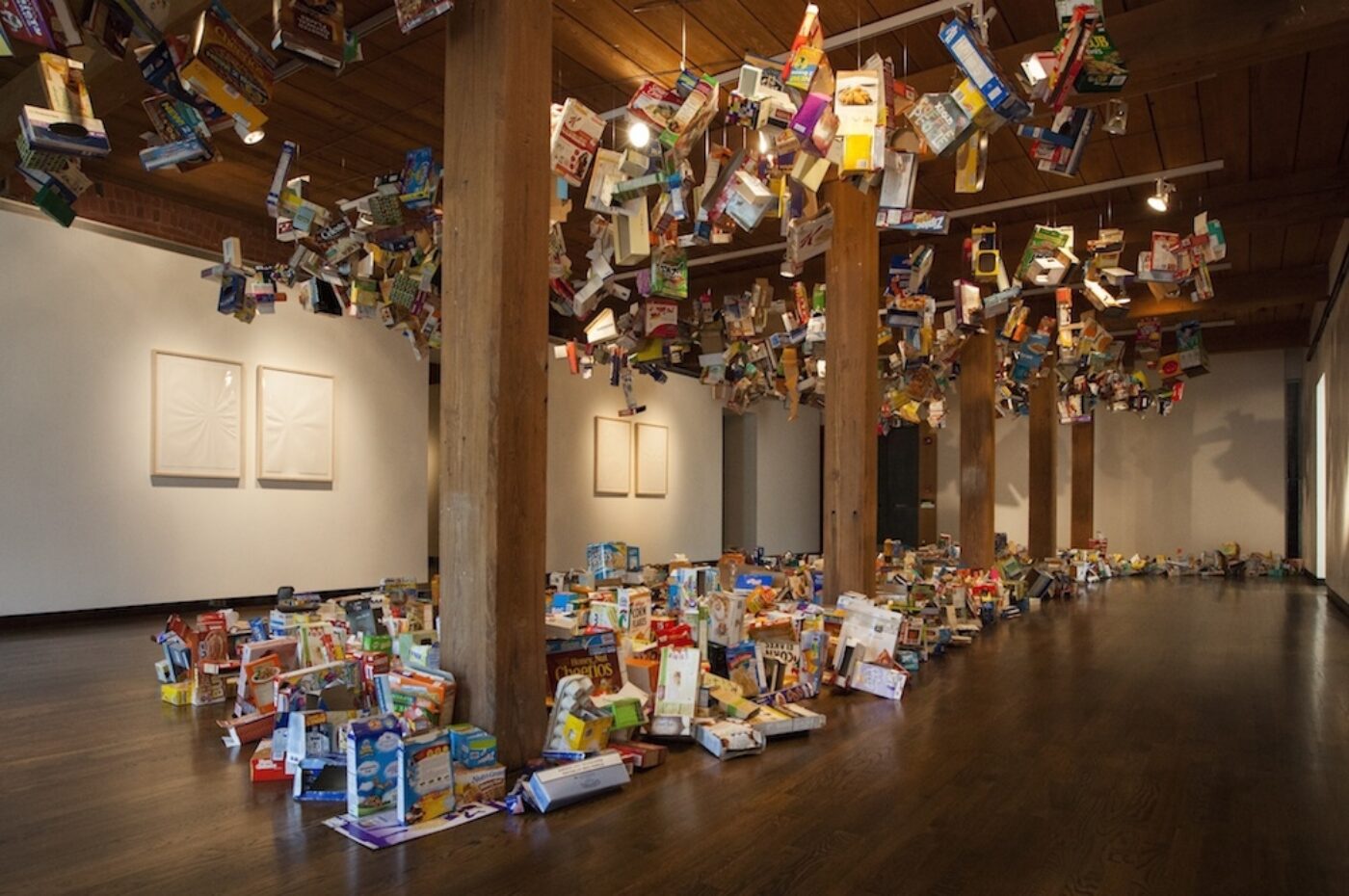 MJLike many artists in the Now Dig This show, you have a complex relationship with Los Angeles. You grew up there, and studied dance and movement there as a child. At Bennington College, you were a dance major before switching to sculpture. Also, you’ve performed with Senga Nengudi, your collaborator for almost forty years.

MHThese lessons happened to be with the former members of the Lester Horton Dance Group. Lester Horton was really a visionary and his dancers had tremendous gifts. One of his students became the famous Alvin Ailey. Lester was one of the few who would integrate his company in the ’50s, and was very influenced by other cultures—Asian, Indian, and especially Native American. My teachers all subscribed to this ideology. I was so fortunate, it was very expansive and inclusive philosophically and physically. Senga had also taken lessons as a child with other members of this company, and reached out to me in 1974 or ‘75, and we’ve been working together ever since. 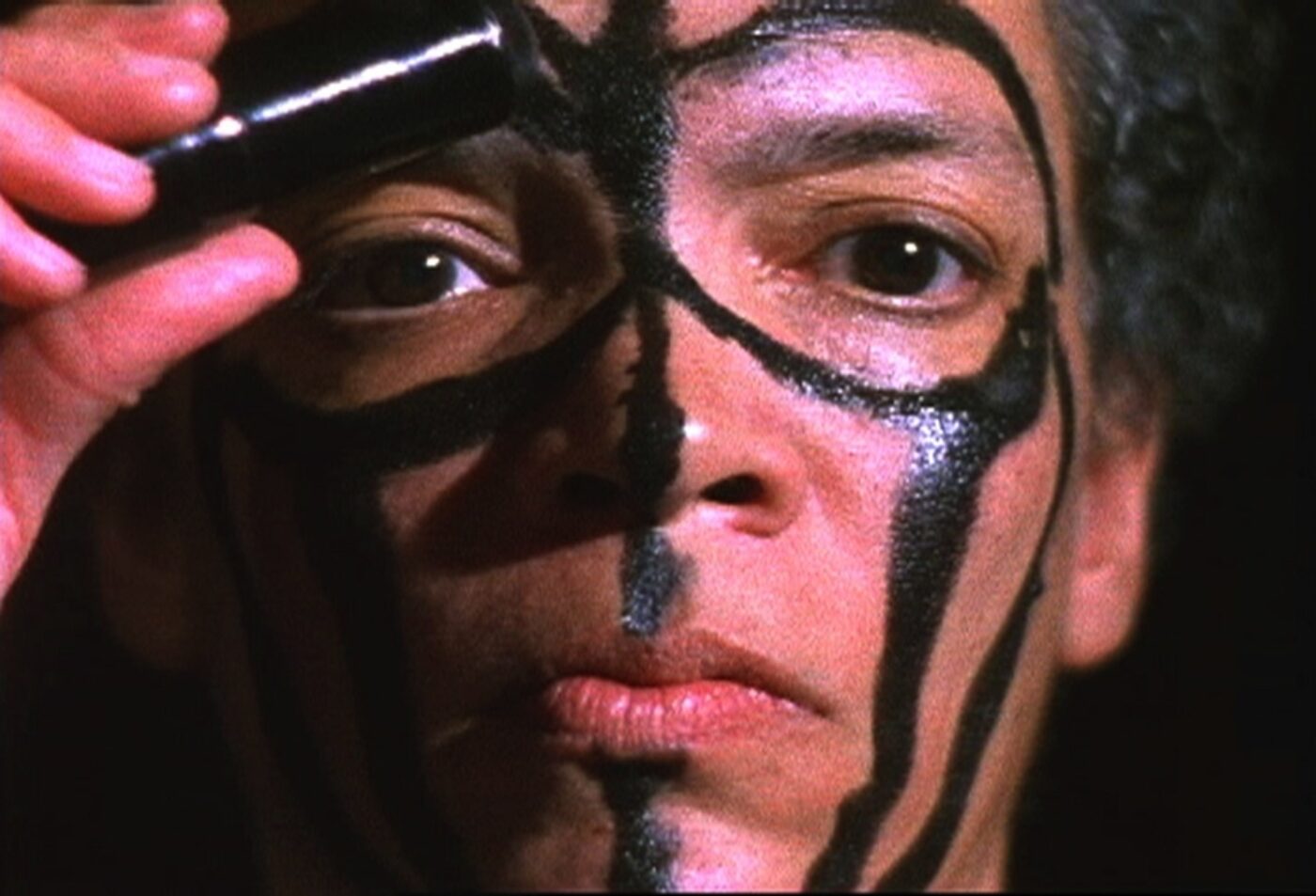 MJYou said one of the things you’ve learned from your collaboration with Senga is about “the possibilities of doing anything, anywhere.” Can you elaborate?

MHInitially, Senga got a group of us together to explore site specific performance. We did performances under the freeway. We had both gotten grants from the Brockman Gallery Productions in 1978–79. I made a series of wire rope trees installed along the freeway. But Senga’s pieces were performative, people playing instruments, dancing wildly to no end while wearing strange costumes and masks she designed, all this happening under the freeway overpass. I was one of them. She called it “Freeway Fets.”

MJYou’ve described collaboration and improvisation as part of your approach to performance, most recently in Women’s Work, at the Walker Arts Center in Minneapolis as part of the Radical Presence show. How so?

MHThe performers and myself were working with newspapers, shredding them and twisting them into a globe. At the end we gave this globe to someone in the audience. At the Walker, the audience included many men, and the performers and I gave the newspapers to everyone in the audience to continue the project. My thinking about that was, “So now everybody’s a woman!” When you’re thinking about equality, we don’t really have to have gender assignments anymore; everybody can share in every gender.

MJYou’ve taught for most of your career, and since 1997 you’ve been the Director of the Rinehart School of Graduate Sculpture at the Maryland Institute and College of Art. What has teaching given you?

MHTeaching. Some really great things have happened from teaching. Women’s Work is about teaching. I decided from the very beginning that I wanted a reading list. I wanted the students to be intellectuals. I think artists are intellectuals, and have to be knowledgeable about the world they’re entering as artists. The late Arlene Raven was the first artist in residence that I chose, and from her experience at The Women’s Building she brought exceptional skills. But most of all, she was so smart, and became a wonderful friend. She recommended I read Pedagogy of the Oppressed by Paulo Freire. I’ll never forget that moment. It was so important. I’m loving that my students now are from all over the world, and represent an international community through their work and ideas, from a Chinese student referencing the golden age of cinema in china, to a student from Wisconsin inspired by Lawrence Welk.

For more information on Maren Hassinger visit her website.

Mary Jones is an artist in NYC, an instructor at SVA, and a Senior Critic at RISD.

Exploring Muslim femininity through the politics of love