Maaza Mengiste‘s debut novel, Beneath the Lion’s Gaze, is a stark account of the Communist revolution in 1970s Ethiopia. 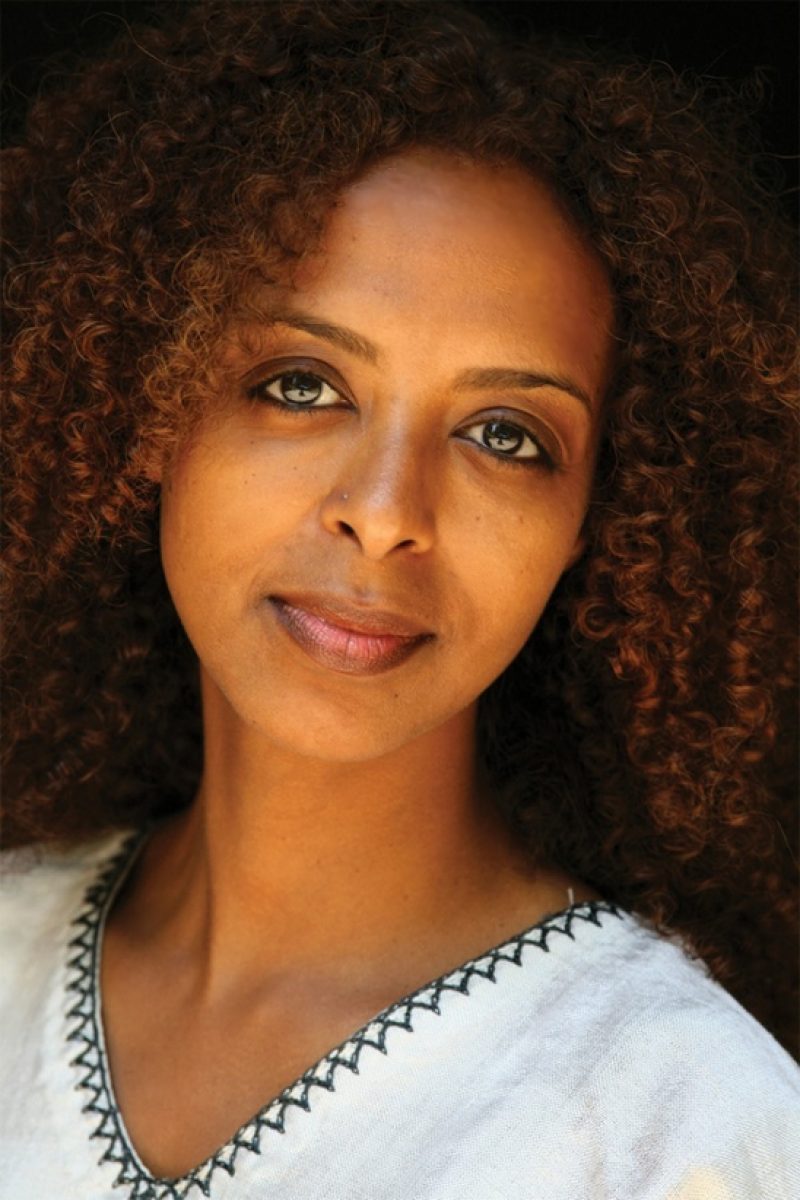 Maaza Mengiste’s debut novel, Beneath the Lion’s Gaze, is a stark account of the Communist revolution in 1970s Ethiopia. The book follows the fall of the Emperor, Haile Selassie, through to the rise of the Derg and the reign of terror imposed upon the people of Ethiopia. Mengiste’s characters are remarkably vivid and she meticulously creates a book with great scope, but also real emotional connection. I met her on a cold October day in the Brooklyn Museum to talk about her new novel and her relationship to the country that inspired it. An extremely friendly and bright woman, it comes as a surprise that Claire Messud writes that “not a single cheerful event brightens this book’s nearly four hundred pages.” Yet the book’s power lies in its refusal to gloss over the realities of the revolution, creating a harrowing but extremely resonant account. It will not come as a surprise if Mengiste emerges as a great new literary talent.

Jack Palmer Beneath the Lion’s Gaze is a very violent book, particularly the scene where Berhane, a small boy, is tortured. Was it emotionally difficult to write?

Maaza Mengiste Yes. That was probably one of the hardest things for me to write. I wasn’t expecting to write it, so it came as a shock to me. Once I was finished with that, there were a few days I had to get up from the computer, shut everything down and I couldn’t sit down at the computer again for a couple of days. I couldn’t go back to revise it for several months after that. It was really difficult.

JP Did you ever worry that the book was too violent?

MM Yes, I did. This book has been a negotiation with history, with what actually happened versus how to convey that in fiction. And so, in the moments when I was wondering about the violence I had to think about what actually happened in situations like that. I would try to remain as true as possible to that era.

JP The character of Dawit becomes a murderer and a revolutionary by the end of the book, yet there is never a condemnation of his actions. Were you cautious of becoming too involved with the characters? Of commentating too much on their actions?

MM I think I was more than trying to commentate, I was trying to show how someone who who is not a violent person—who has no intention of murdering—could commit murder. More than condemning him or anyone else in the book I was trying to get an understanding of how that happened to people back then and to people now.

JP The book features numerous poetic dream sequences; would you characterize them as magical realist or would you refrain from such terminology?

MM I wouldn’t use that terminology, I am not sure why I wouldn’t because I love things that are called magical realism, but for me these moments seem to be not necessarily connected to reality as much as just another dimension, particularly with Berhane, and particularly with Salem. This is another level perhaps of something we don’t experience in reality.

JP Were the dream sequences difficult to write?

MMBerhane’s was, only because I cared about him so much.

JP You left Ethiopia when you were four. How much of the Communist revolution do you remember and did you have to do a lot of research for the book to learn more about the revolution and its political concepts?

MM Surprisingly I remember a lot. The revolution was starting when I was there and there are many things in the book that come from memory and my grandparents. I lived with them and my mother. They were all surprised that I remembered what I did. When I initially wrote the book, a lot was from memory. Once I got a little bit older I would visit on a regular basis. I was there when the dictator was in power, so I remembered a lot of those things. It was then I started researching the details that daily life seems to override. So that’s when I started locking down dates.

JP Did you leave Ethiopia because of the revolution?

MM My family left and we moved to Nigeria. My father worked for Ethiopian Airlines and requested a transfer partly to get us out of that situation. Then we moved to Nairobi, and when we were there my parents were wanted for questioning back home in Ethiopia for revolutionary activities and I had an uncle who was killed at that point in Ethiopia. My mother wanted to get me out of that situation, that is when I came to the US.

JP How long have you been in the US for?

MM For a long time. (laughter) I have been here since I was seven.

JP Chris Abani says you “deliver an important story from a part of Africa too long silent in the World Republic of Letters”. Where would you direct readers interested in learning more about Ethiopia?

MM There are books written about this and one of the books that I read that I felt was really beautifully done was a memoir by a writer named Nega Mezlekia—he’s out of Canada—called Notes from the Hyena’s Belly. I have read so many history books, a more recent book of fiction is Abraham Vergese’s Cutting for Stone which deals in part with this revolution and really gives a good insight into Ethiopia and its culture.

JP How do you feel about your novel as an African novel?

MM As opposed to?

JP To novels by writers who have lived in Africa their whole lives. Do you have any issues of authenticity?

MM It is interesting, I think at some point when more people like me continue to write I think the categories in the publishing industry will probably have to change, about what exactly makes something African, or what might make something an immigrant story. Those labels are I think beginning to merge right now.

MM Yes, exactly, but then we have Dinaw Mengistu who wrote The Beautiful Things That Heaven Bears, which tells the story of an Ethiopian immigrant. I have found people who are having a hard time classifying that book, whether it is African or not. Whether I classify my book as African? I think because this book takes place there, it is. Do I consider myself Ethiopian, I do, but I also consider myself American. So when I write a book based here, then maybe it becomes an American book.

JP The character of Mickey in Beneath the Lion’s Gaze is strongly reminiscent of Ferdinand in V.S. Naipaul’s A Bend in the River, was there any inspiration?

MM I didn’t really take Mickey from that, that’s an interesting comparison, but I read that book so long ago. Mickey’s character came from these stories that I would hear, of people my family would know that would go to the other side. People that you know whom are very decent people, who would end up working for the Derg—how did that happen? This is just one possibility and one answer, that is what interested me.

JP How did you feel about portraying Selassie? It was quite an intimate portrayal.

MM That was hard, because I realized that his figure was so mythic; he is such a large personality historically and also culturally in Ethiopia, that it was really intimidating for a while. I had to figure out how to do it. I was hoping to create him in a way that still maintains a myth of him.

JP How did you get into his mindset? Obviously you cannot really write from within yourself to understand his character.

MM I was really thinking that at the end of his days he probably was an old man, tired, and couldn’t quite understand how everything got to the point of where it was. So I was trying to write from that perspective.

MM It was hard. I hadn’t really written before, I was doing copywriting and trying to do a script. This book started out as a short story that I wrote for admission to NYU. I didn’t intend for it to become a book, I just thought Let’s try this and see if I can do it. I was intending on doing a collection of short stories which would probably trace a family’s life here, the same way that my life went, but once I got to NYU and there were just so many questions people were asking about the historical background, and the more questions I had to answer, the more I realized it was a book.

JP Did you always aspire to be a writer?

JP You are a very poetic writer and part of the novel is quite historical, did you feel you had to control your writing style?

MM The history kept me grounded, but there were moments when I had to pull back because you have to convey information and for this book it tended to set parameters.

JP Was it difficult representing Ethiopia? When was the last time you had gone back?

JP Did you go purposefully with the idea of writing about it?

MM I was there for family reasons. I had already done a lot of the book. I had gone to see my brother getting married. I took my camera, I took my notebook. All the things I knew would be in the book I tried to take pictures of and asked my mother and father a lot of questions.

JP Do you think you will write about Ethiopia again after the experience?

MM Probably, I have tried doing things set in the US and for some reason I can’t do it.

JP Brooklyn has a very strong writers’ identity. Do you feel a part of that?

MM (laughter) I love Brooklyn, I feel like I am a part of Brooklyn but if I sit down and write I can’t describe my street for some reason. Imagination just doesn’t kick in that way. I’ve heard of writers who have to be away from a place in order to write, and maybe that’s what it is.

JP Do you feel Brooklyn is overdescribed?

MM It is interesting, as many things that I have read from writers writing of Brooklyn I still think there is room for more, because I think Brooklyn is constantly changing. I am excited to see what else comes out from that, I don’t think it has been overdone yet.

Beneath the Lion’s Gaze is out from W. W. Norton & Company.