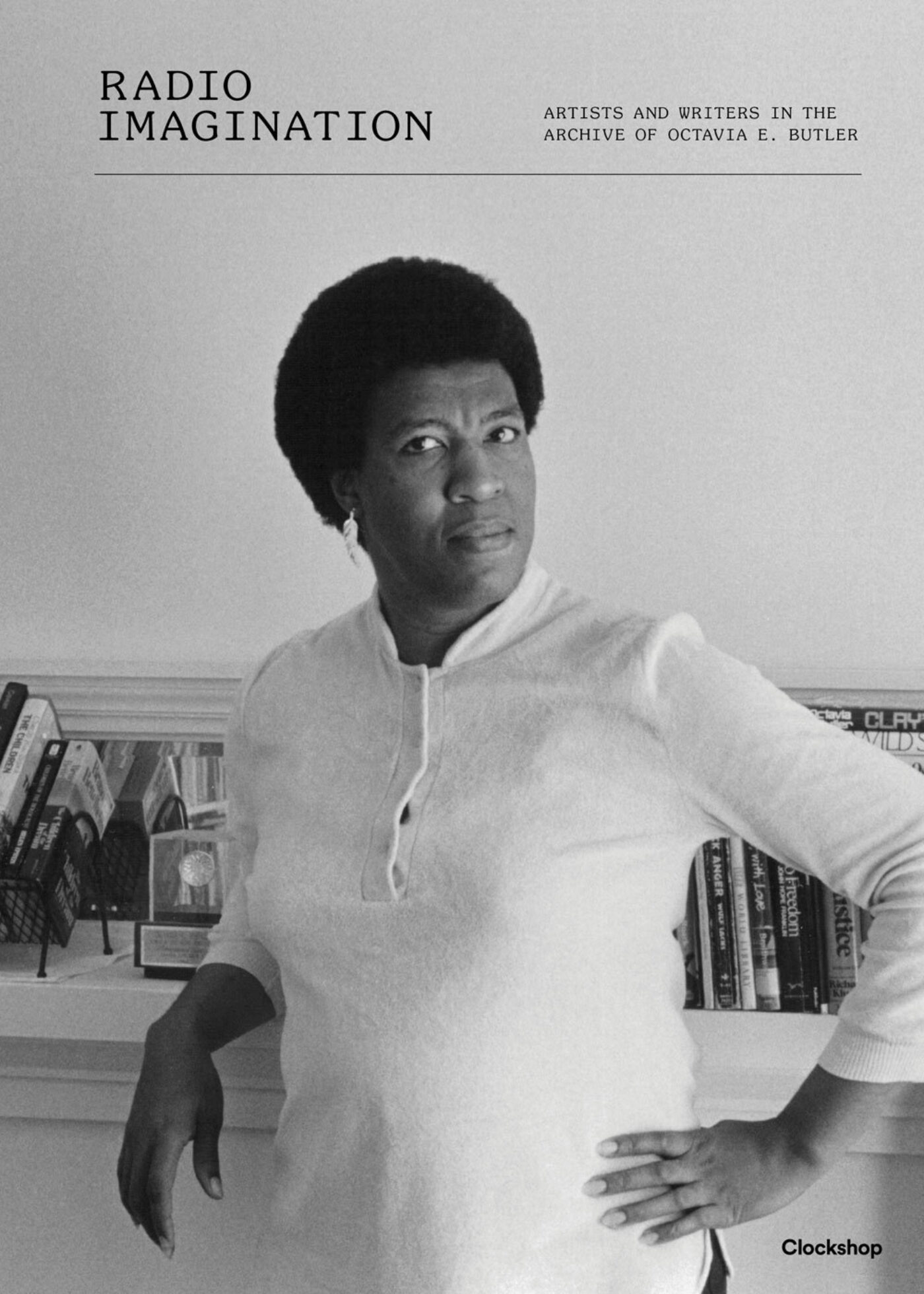 Radio Imagination: Artists and Writers in the Archive of Octavia E. Butler, Clockshop, 2018.

I interviewed journalist Lynell George about “Free and Clear,” her posthumous interview with African American science fiction writer Octavia E. Butler. George crafted her piece from extensive research of Butler’s voluminous archive at the Huntington Library, San Marino, California. Both George and myself were commissioned by Clockshop (Los Angeles) to produce new works for the exhibition and year-long (2016–17) programming Radio Imagination: Artists and Writers in the Archive of Octavia E. Butler. A recently published catalogue of the writings and art produced for Radio Imagination, including “Free and Clear,” is available through Clockshop’s website.

Connie Samaras How did the idea for “Free and Clear” come about?

Lynell GeorgeThe director of Clockshop, Julia Meltzer, invited me to do a piece about Butler. Because I am a journalist, she thought it would be interesting if I did a posthumous interview. I said I would love to. So I came here to the archive and found over three hundred boxes of material. I was overwhelmed. [Laughter.]

CS Yes, actually thousands of pieces and something like 345 boxes. We should mention here the incredible work of Huntington Library Curator Natalie Russell who meticulously indexed the entirety of Butler’s papers.

LG Yes, and as I say to people, I got to know Natalie as well as Octavia as I moved through the archive. I kept thinking about what her job must’ve been like trying to create some sort of order.

CS So given the magnitude of the archive, what was your process in coming to shape your posthumous interview with Butler?

LG I gave myself a deadline of one month, but I wasn’t really sure what the interview was going to look like. I didn’t want to impose too much of a frame on it. I certainly didn’t want to do something that felt as if I was having a séance. I started with her most personal papers. I wanted her interior voice; I didn’t want the formal writing. I went immediately to her diaries and letters and to the commonplace books. From there I started looking at the marginalia because I was getting a sense of wanting to know what was on her mind while she was writing in her journals. What was she watching on television? What were her distractions, her shopping lists? What did her day look like? As I began to push through, I realized that she is constantly asking questions of herself, about the world around her, about her life, about problems she’s encountering in her writing. And then she answers them, maybe days later, maybe years later, maybe weeks later. So it occurred to me: this should be Octavia E. Butler interviewing herself.

CS It’s interesting that you and Butler are both native Los Angelenas and from families that came here in the Great Migration from New Orleans. Also, you now live in Pasadena where Butler wrote and lived most of her life. Did you ever meet?

LG I met her a couple of times. The first time was when I was still in college and I went to a reading at either Eso Won bookstore or Midnight Special. I remember I went with my mother who was a Butler fan. She was the one who purchased the Butler books! She was the one who wanted to go and see her read.

CS Had you read Butler at that point?

LG No, I had not. At that time Kindred had probably just come out. But what I remember most was that she didn’t read. She explained that she didn’t do readings. Instead she talked about her process of writing the book. What I was struck by was her stature and her voice—this beautiful, deep voice. I saw her again years later when Parable of the Sower came out. By then I was a journalist and wanted to write about her for the Los Angeles Times. Later I ended up in Seattle for the “Black to the Future” conference, a science fiction convention for African American science fiction writers and enthusiasts. Butler was giving the keynote. Afterward I found her, and we chatted. By then she was living in the Pacific Northwest. I told her I hoped to be able to come back up and interview her. She was amenable. But the saddest part about this was that she died a couple of years later, so I was never able to do an interview. In a way, working on this project allowed me to have my time with Butler.

CS The opening line of your piece is: “How long do you wait for a presence, not a ghost, but a feeling.”

LG It really was that. When I was feeling unsure I had to remind myself as a journalist that you always trust the process and that this was just a different way of trying to get somebody to open up. She wasn’t there physically, but she was still leading me. Sometimes just before leaving the archives I would write down an address. On my way home I would go by the location; it might have been her childhood home or an apartment she had lived in briefly. I did it so I could get a sense of where she was while she was working on the particular thing I was thinking about that day. And that’s when it started to come together when I could see her moving through her world. Seeing her shopping lists, her calculations for how much she needed to pay for rent, her notes for a public-speaking gig she was frightened to do and how she made herself less frightened. It was seeing the way she started to put together her life and a persona that started to feel real.

CS Money was a constant struggle, something you make evident in “Free and Clear.” And even in light of the MacArthur she received in her late forties, she writes in her later journals that her ability to continue to produce novels was a looming financial concern.

LG I don’t think she ever felt comfortable. She was still caring for her mother at the end of her mom’s life, and when she was ready to move to Washington State in 1999, she was counting her pennies to be able to go. And, yes, she was able to live a more comfortable life, but I don’t think she ever stopped thinking, “How do I plan this out? What’s the next phase, because these are the books I need to write, this is what I need to do in order to be able to keep the roof over my head.”

CS Working with Butler’s papers one is struck by the repeated affirmations like: “You will be a famous writer. So be it! So see it!”

LG She figured out fairly early that she was the only one who was going to advocate for herself. She had shared her dream of wanting to be a writer with a relative, and the relative looked at her like she was crazy. “You’re a smart girl, but that’s not a smart thought. Negro girls aren’t writers; you can’t do that.” So she told herself, as she wrote in her journal, “You keep that to yourself,” and she had to find a way to power through. So those affirmations came from her reading books by Napoleon Hill or Norman Vincent Peale, but she turned them into ones that would apply to her. She would start her day by writing out an affirmation, sometimes the same one every day. She also wrote contracts: “I wrote 400 words today. I will write 500 words tomorrow.” And if she hit her goal, she would take herself out to the movies. [Laughter.] She knew how to treat herself.

CS The way “Free and Clear” gets at the process of being a writer, particularly the solitude, is very moving. What is your identification with Butler in that regard both in terms of overlap and difference?

LG There was a point in the archive where I found that Butler thought she wanted to be a journalist but she realized she was too shy and too introverted to actually do the reporting. She read books about doing interviews; she did try a couple of times. I think she would have been a great journalist if she could have been able to get through that. But she took that journalist’s curiosity and applied it to the research she did for her books. She was endlessly researching things. She talks about being a news junkie. She even says that when she was working on her books she would put herself on a news diet. She wouldn’t listen to NPR in the morning because it would fill up her imagination too much. I could entirely relate to some of her process. She just bent it a different way. She was able to deal with topics—like climate change, politics, and social issues—but she did so in the form of speculative fiction.

CS You mention climate change. It’s utterly chilling to be in the archive and read her numerous notations about climate change, some from forty years ago.

LG Everyone now says she was so prescient. She was simply paying attention. And then she just extrapolated. That’s what’s so chilling about a book like Parable of the Sower. Some of it feels like we’re experiencing it now, especially the passages about the drought, and being stunned when we get rain and how excited we feel when rain comes out of the sky. That’s not off the mark.

CS Butler referred to Parable of the Sower as a cautionary tale. It’s an amazing book to read in any political era, but especially now. For those who haven’t yet read Butler, where would you suggest they start?

LG I always tell people to start with Kindred. Especially for people who say they’re not into science fiction, since this isn’t a book about a time machine or technology. It’s a “what if” that looks at the concept of time as being continuous, as something we slip in and out of. And for what it says about slavery, the legacy of slavery, and how we carry it inside of us. For many African Americans we’re already going back and forth in time in the struggle of our day-to-day lives.

Lynell George is a journalist based in Los Angeles. Her books include No Crystal Stair: African Americans in the City of Angels and the recently published Afterimage: Los Angeles Outside the Frame. She’s also the recipient of a 2017 Grammy award.

Connie Samaras is an LA-based artist. Her work was recently included in the New Museum exhibition Trigger: Gender as a Tool and a Weapon. She’s also a contributor to the recent anthology Luminescent Threads: Connections to Octavia E. Butler. 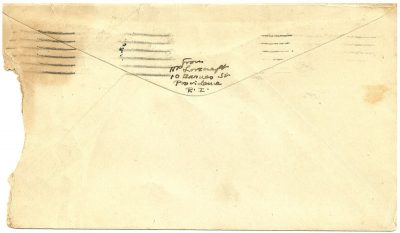