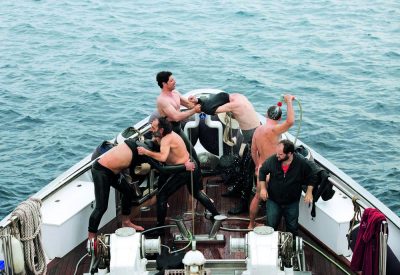 Such futile yet thrilling speculations might have been an initial impetus for Evolution, a mysterious and unsettling film by Paris-based Lucile Hadžihalilović. However, its story, part horror, part sci-fi, unfolds beyond fantasies of gender reversal and taps into anti-Darwinian selection and bioengineering. Masterfully shot on a barren volcanic island, the film has at its core two competing yet interdependent forces—nature’s immense power (and creativity), symbolized by the ocean, and human ingenuity (and cruelty), represented by a rundown hospital that evokes the sorrow-worn interiors of Tarkovsky’s Stalker.

Aptly, Evolution begins underwater, where ten year-old Nicolas (Max Brebant) makes a discovery that robs him of his naiveté. Within the first few minutes we are in the grip of the film’s steadily mounting suspense. We watch uniformly clad young mothers care for their prepubescent sons as they go about their daily lives, which consist, for the children, of diving at the rocky shores, eating slimy seafood concoctions, and falling asleep in spartan adobe homes after imbibing dark, ink-colored medicines administered by their guardians. The rest of life as we know it doesn’t figure into the world of Evolution: there’s no education, no culture, no true community. When neither adult males nor young girls nor elders appear on the scene, we get an ominous feeling. Eroticism and danger seem to hang low in the moist seaside air.

The film brims with symbolism and archetypal image cues. Trying to piece them together is one of the pleasures Evolution provides, even as these cues resist a linear read. Starfish and other sea creatures keep making eerie appearances even when the narrative shifts from the stark beauty of the outdoors to the gloomy interior of the medical facility where all the boys eventually land. The film contains only two hints at more recent technology—an ultrasound monitor, and a video screen showing a Caesarian birth that repeatedly enraptures the all-female hospital staff. A string of disconcerting if not downright shocking treatments occurs, but it remains ambiguous whether they are the young males’ nightmarish projections or part of their reality. Potentially, they are both, just as fear or hallucination can turn into actual experience, and just as “objective” reality doesn’t necessarily match our thoughts or descriptions of it.

This is a film about the primal creature-ness that we humans share with other species. Evolution draws an unadorned arc from birth to death, here bound up with water, be it amniotic or saltwater fluid. Along the way lurks eros followed by reproduction, looming large in a murky and hazardous zone that the boys enter with innocence, menstruating noses, and palpable trepidation. (Hadžihalilović’s earlier feature, Innocence, dabbled at the same threshold, from the vantage point of prepubescent girls.)

As the boys are held hostage, manipulated more and more by their alleged caregivers (or held in thrall by hallucinations), they sicken and succumb—except Nicolas, who experiences with Stella (Roxanne Duran), one of the nurses, a dreamlike maritime initiation that frees him from his incubus, literally, and finally, from his mother.

Evolution has the ring of an ancient tale, full of enigma and silent yet momentous actions, while anything superfluous falls to the wayside—just like in evolution. 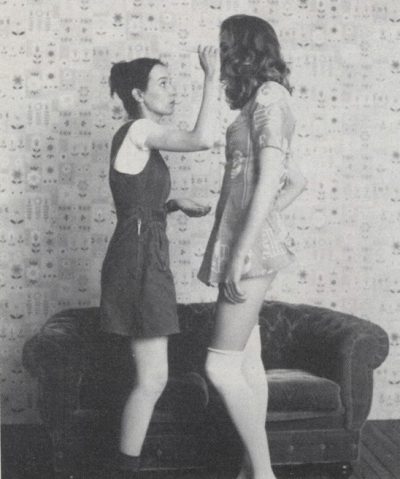 Paris, like New York, is suffering irrevocable change under the rousing banner of real estate development.