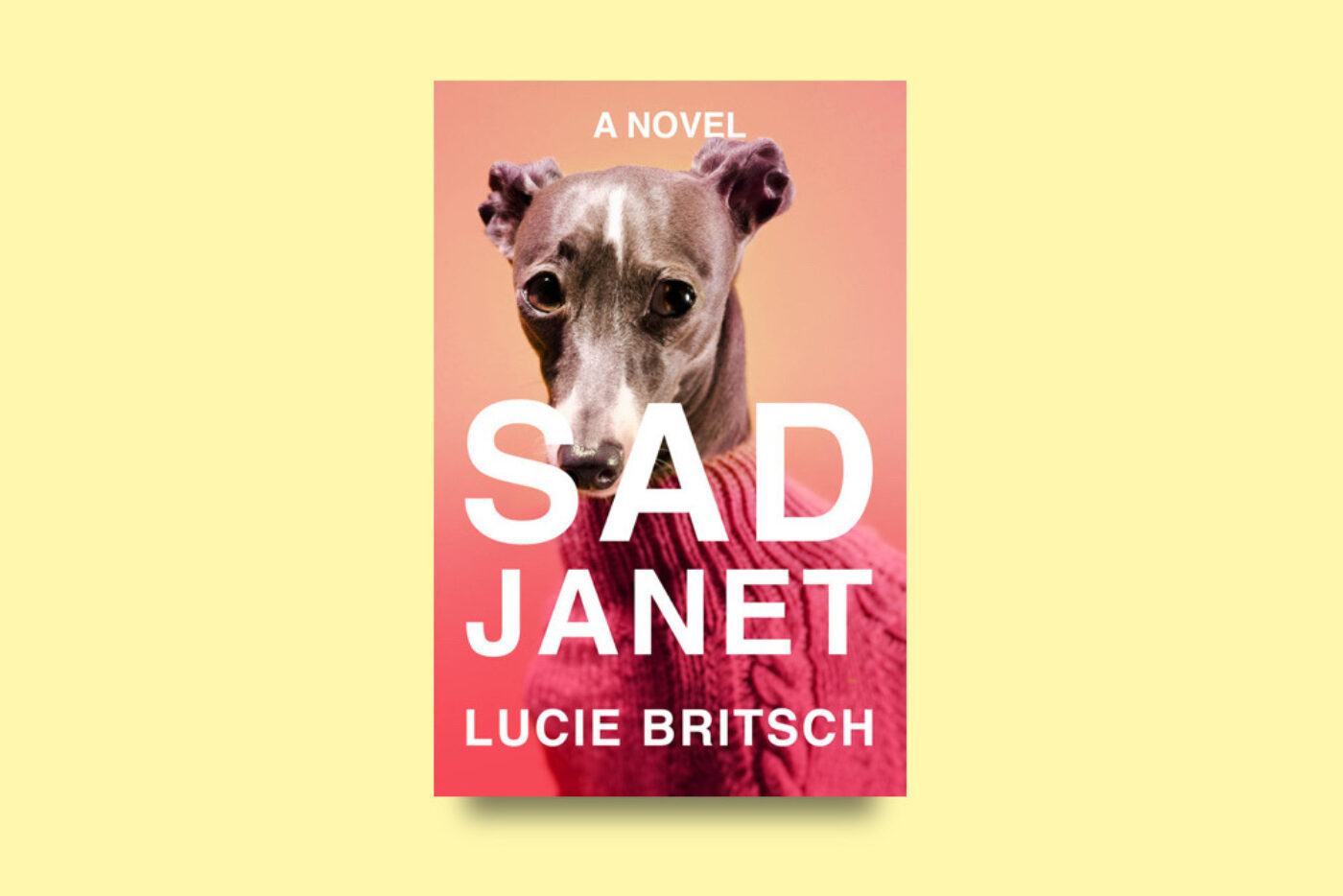 I encountered Lucie Britsch’s debut novel Sad Janet (Riverhead) at the end of 2020—for most of us, an indubitably sad year. Because of our global, shared experience, there’s more discourse than ever about the validity of sadness and other negative affects. Celebrities, memes, and headlines remind us that it’s okay to be anxious; it’s okay to be sad. We just need to remember to drink water, accept where we are, and trust that there are better days ahead. Yet scrolling through these infinite infographics on Instagram doesn’t really make it less isolating.

Sad Janet likewise affirms that sadness is normal. In fact, it reminds us that it’s inescapable in the world where capitalism thrives by selling limitless solutions to the bleak realities it creates. The novel’s titular narrator is skeptical of the remedies that are marketed and sold to us, including everything from pharmaceuticals to most consumer products.

The events of this novel take place as Janet approaches the enforced happiness of the Christmas season and considers whether or not to take a new antidepressant dubbed “The Christmas Pill.” This pill was designed for people who don’t want to take medication in the long-term but need a little extra help through the holidays. It was designed for people like Janet—and in fact, she has the suspicion it was developed specifically for her. As our narrator wrestles with her decision, the novel asks how we can accept sadness, fulfill our responsibilities to ourselves and to the people we love, while also uncovering hope without denying our reality and its ugliness.

Rebecca van Laer How did you decide to write a book centered specifically around Christmas? There are so many expectations throughout the holiday season, and I’m particularly interested in the way you think about Janet’s dread of the Christmas season versus her total avoidance of acknowledging the New Year and the resolutions that come with it.

Lucie Britsch I had a few low Christmases where I wasn’t really feeling it and had to force myself to. I thought, if there was a pill I could take, that would make this easier. I would take that pill! The book came from that idea but also my love of books about experimental drugs coupled with how much I hate the pressure society puts on us to be happy, especially during Christmas.

I think Janet just doesn’t want to feel obligated to do anything because society tells her she should, be it Christmas or New Year’s resolutions. She wants to live her life on her terms. All those big celebrations people put so much emphasis on just leave her feeling cheated out of authentic experiences.

RVL Since Janet so rarely encounters authenticity, she seems to feel that sadness is perhaps the only thing that’s truly authentic. But she is also skeptical of the aesthetic of sadness, like the existentialist, or “cool kid” sadness—an important part of her identity that she’s unkempt and uncool. What do we lose when sadness becomes a meme or an aesthetic?

LB Well, it is those things already isn’t it? A lot of celebrities are jumping on the mental health band wagon, and you can tell who is authentic. Everything is a commodity now, even our feelings. Celebrities know this. People want authentic, so people fake it. Like Janet says, seeing through the bullshit is her superpower. I always joke that if it’s cool to be weird now, do I have to start being normal? There’s this growing feeling among people who consider themselves weirdos or alternative that if this is mainstream now, where do we go? I don’t want some pop star telling me it’s ok to be sad, I knew it was ok before. We get our validation from the wrong places. Our feelings have been hijacked to sell us stuff.

RVL You do such a good job of making that critique while giving us this hilarious inner monologue. How did find a way to strike the careful balance between a funny and painful voice?

LB I think a lot of us have that inner monologue, and I enjoy dark comedy. Life is absurd most of the time, so we have to see the funny side of it. I don’t really enjoy things that are all suffering and pain, books that are supposed to wreck you. I need some humor to cut through it.

RVLAbsolutely. And there is a lot of sadness here. Janet works at a dog shelter, which she calls the “saddest place in the world.” Yet it’s also the only place she can see herself, since time with dogs is so vital to her. Why do you think animal companionship is such a lifeline for the women in this novel who feel alienated from the human world?

LBPeople get something from animals they don’t get from humans. Animals are just better on a lot of levels. They validate us in ways humans can’t, because they don’t put all our human bullshit on things. You can feel like a shitty human, but then a dog sniffs your crotch and gives you a lick and you realize you can’t be that bad. Mostly, they don’t ask us dumb questions or want us to talk about our feelings. They just accept us.

RVLI feel like that’s why sad people love pets and books. On that note, what were you reading while you dreamed up this novel?

LBI don’t really read when I write. I’m one of those weird writers that isn’t good with distraction. I also feel like if I read, I’ll feel bad about what I’m writing or just lose my focus. Sometimes I have to go as far as pretending no other books exist so I can write from a truly authentic place that hasn’t been influenced by anything other than what’s in my head.

RVLIt’s so easy to get caught up in comparison, since the world is designed to foster it. Relatedly, this novel has a strong critique of Big Pharma, which seems to pathologize more and more emotions every day. Beyond that, there’s the lurking specter of Big Data, and the idea that companies are using it to individually target people based on their resistance to past medication. Is this part of why Janet is skeptical of digital life?

LBI mean, we’re basically living in a sci-fi novel already. Unless you live in the woods with no phone, these big companies know your every move. Even then, they know you live in the woods with no phone and they are, this very second, trying to lure you in some way. Without sounding like a nut, all these big companies are looking for the untapped markets—the resisters—because they need total control of us for their evil plan of world domination to work, and for our money.

RVLYes! Janet defines herself as a “resistor,” but there’s loneliness in that—an even further isolation when you feel angry that your own insecurities are being sold back to you. That leads me to my next question about Janet’s tendency to describe “the sad, the bereaved, the lonely” as “Janets,” using her own name to define the whole class of resistors. Throughout the book, this lends itself to hilarity, but I’m also wondering more about what it says about our narrator. Is this a little narcissistic? Or hopeful?

LBI don’t think she sees anyone’s sadness as being like her own. She recognizes other people’s sadness and wants to honor that, and she secretly wants to feel part of something, even if that thing is sadness. It helps her feel less alone mostly. Also, Big Pharma basically hacked her life to make this pill, so she’s just playing them at their own game, making herself a commodity.

RVLJanet generally has the sense that men are terrible, although almost all of the male characters in this book seem to have some redeeming qualities. Was it a conscious decision to leave male violence at the margins of the book?

LBI wanted to write a book about one woman’s adventures in sadness, and the women in her life. The men in Janet’s life aren’t that bad really, but I wanted it to be about women, as these are the relationships that define her. There are plenty of books about how awful men are; I didn’t want to add to that. If anything, this is a book about how great women are.

RVLWe need more of those! On another note, what has it been like to keep writing through the chaos of 2020? Has it changed the themes and topics that you writing about?

LBIf I wasn’t working on a book, I would have gone insane this year. My writing has really saved me the way it’s supposed to. Shutting myself away and immersing myself in something else has kept me sane. I have no desire to write anything set in 2020, nor do I want to read anything set then. I lived it, thanks, so my writing hasn’t really been affected. Everything I write is set before now or further in the future so I’m avoiding dealing with this year for as long as possible! I don’t think I’ll be able to process it for a long time, or ever? I’ll keep writing my odd little books I hope other people enjoy.

RVLI’m glad we’ll have more to look forward to in the future! And, while Sad Janet is very much a book about sadness, it’s also about hope. How do you think Janet would look forward to 2021?

LBI think like most of us she would just take it one day at a time and not fully trust it won’t just be a different kind of awful. Maybe she would be optimistically cautious. If we survived 2020, we can get though anything, right?

Rebecca van Laer is a writer based in Kingston, New York. Her work appears in TriQuarterly, Salamander, Hobart, Electric Literature, and elsewhere. She is the author of a chapbook, Don’t Nod (Long Day Press 2019) and holds a Ph.D in English from Brown University. 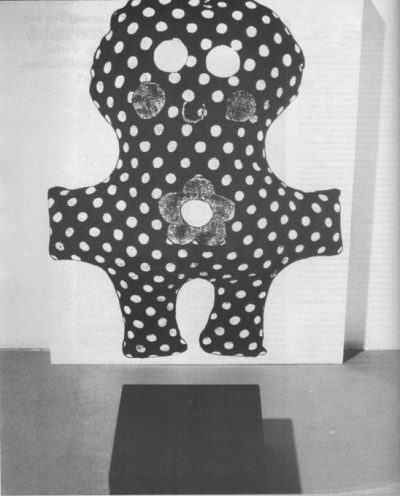 “Perhaps because people have a short attention span you can get away with illogical developments if you make them unfold over a long period of time. People will assume that it is logical because they can’t remember what happened before.” 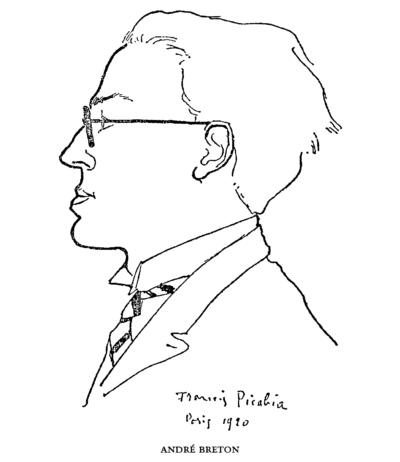 In 1919, André Breton and Philippe Soupault were coming of age in the wake of World War I and the Spanish influenza pandemic.

A Subject of Speculation: Stephanie LaCava Interviewed by Katie Ebbitt 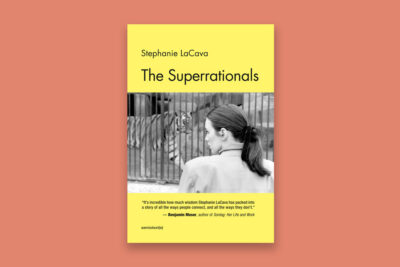 On process, inspiration, and the psychoanalytic underpinnings of The Superrationals.