Lisa Radon on her recent PICA residency, the white magic of books, and transforming radical skepticism into Radical Openness. 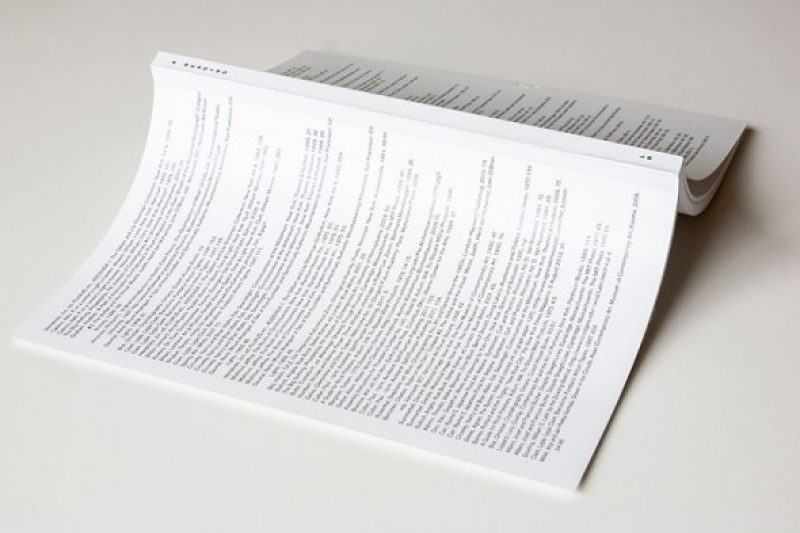 Lisa Radon makes essays, poems, performances, and publications that carry with them a mesmerizing ethereal quality despite the density of their content. She continues the tradition of the artist who not only postulates, but also creates; devising works that combine her stream of consciousness research with a smart design sensibility.

I corresponded with Lisa at the end of her Resource Room Residency (RRR) at Portland Institute for Contemporary Art (PICA). Begun in 2012, the RRR is conceived for artists whose methodologies utilize text, design, and research. The residents are granted a stipend and unlimited access to PICA’s archive and library for a three-month period.

Mack McFarland Lisa, the press release for your Resource Room Residency, titled WHITE MOUNTAIN, is a lovely bit of prose poetry that does not describe much of what you were doing in the Resource Room, though it does leave us with some tantalizing images. Taken with the quotes from René Daumal’s Mount Analogue: A Tale of Non-Euclidian and Symbolically Authentic Mountaineering Adventures and Blaise Cendrars’s, The Astonished Man, I am sensing a feeling of scientific wonder towards the incomprehensible largeness and stealthy nature of language. You write: “WHITE MOUNTAIN is a constellation.” What are some of the points of that constellation?

Lisa Radon It all comes from and through language (language is my primary medium, after all) and reading specifically (Cendrars says, “…eating the book is the highest form of white magic.”)—but that’s just where I started.

I’d imagined this residency as a temporary autonomous zone, a time and space for thinking-through with my Invisible College, my Thinking Fellows, living and dead.

What’s a book for? It is a tool against forgetting, a container for the ideas of the writer, and so a way of transmitting those ideas through space and time. A book is a technology for putting me in touch with my dead Thinking Fellows. The living ones, we just have lunch and talk.

I’d also conceived of this project as “taking a reading of” the Resource Room, of engaging in a kind of bookshelf divination. But one never comes to a reading with naked mind. So yes, I had this kind of constellation of things I’d been thinking about, including memory and forgetting and with regard to forgetting, the impossibility of the unmediated experience in the house of language. Everything else is secondary to the question of “What is consciousness, and how does it interface with the world?” Incidentally, this led to thinking about magic as research into memory systems beginning in Ancient Greece and leading up to the Renaissance. Did I expect to be able to think about consciousness or magic through the books in the Resource Room? Not really, but until we spend some time trying to understand consciousness, the rest of my questions are kind of gravy.

MM What were some of the outcomes of the bookshelf divination?

LR I should say that I use that phrase because it happens so often to me that I can be standing in front of a bookshelf and pull down a book and open it to a passage that speaks directly or obliquely to what I am thinking through at the moment. It’s magical, real, and I’ve come to expect it rather than be surprised by it, as I was for a long time.

The process was one of locating bright and unexpected lines between passages, pages, ideas of disparate books to make this luminous net crossing time and genre and space in the way a pile of books does so well, and reaching well beyond the circumscribed art zone that I expected. I have this idea about knots—which I love, by the way—having this incredible power of introducing different parts of the line to one another, having them rub up against one another in ways that in a knotless, linear world would be impossible. So each of the nodes of this net is a productive zone of idea generation, future research, reorientation of idea sets, etcetera.

Although it is probably not evident in the actual outcomes of the project, it was productive to engage the practices and thinking of a lot of great ladies. I didn’t go in looking for them, but starting with Lucy Lippard’s From the Center and touching on Agnes Denes, Lygia Clark, Agnes Martin, Roni Horn, Hilma af Klint, among others, there was a lot there. I went also went pretty deep into a handful of books dealing with physics, consciousness, metaphysics, and perception. 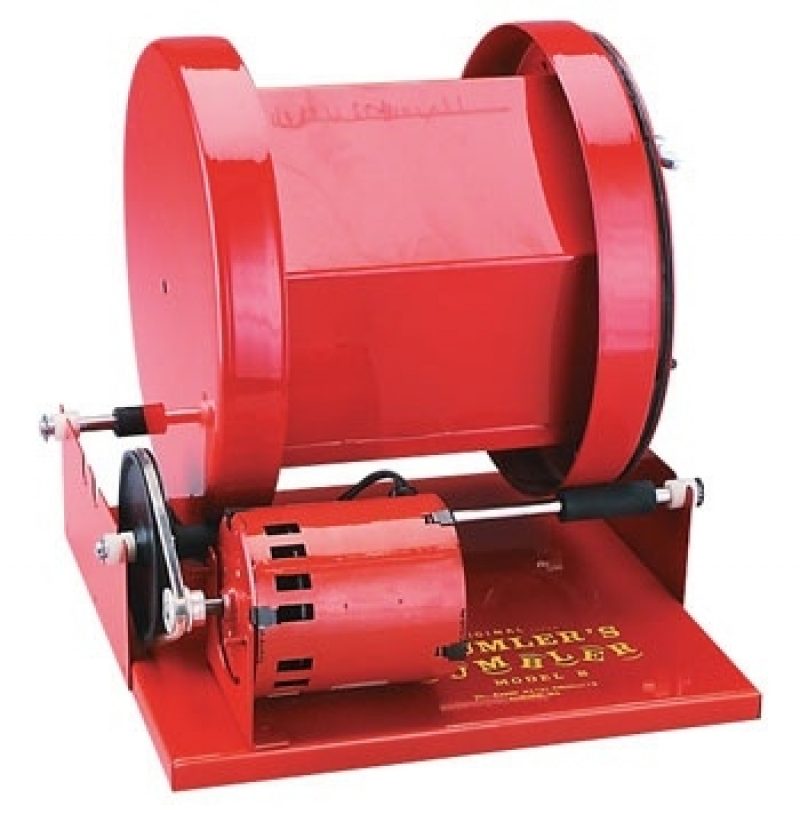 Lisa Radon. Looking at some circles, 2012. Tumbler. Photo courtesy of the artist.

MM I want to chat about those outcomes, but first I’d like to know about the physical alterations you made to the space, such as the white throws you placed over some of the dark furniture in the Resource Room. And of course, I have to ask you about the rock tumbler…

LR Oh, I had just been thinking generally about how one goes about “setting conditions.” In this case, setting the conditions or clearing space for productive thinking and for excavating whatever I needed to find in those books. I was thinking about clearing, grounding, and carving out space. The Resource Room is completely open, which feels vulnerable and weird for what I imagined as a study… You know how in Christopher Alexander’s A Pattern Language he talks about carving out smaller human-scale alcoves from greater spaces? I built a metaphoric wall and did some clearing of the space, both concretely and in more esoteric ways. I excised a few disruptive visual elements and brought in important things like the ocean, the earth, and the engine. I made a trip to my home place and brought back stuff like ocean water, sand, and rocks. And of course I am way too in love with that beautiful, shiny red rock tumbler.

MM That tumbler evokes a nice metaphor for your method, not just the pinballing around the bookshelves, hardbacks, or paragraphs, but also the kind of “re-” prefix that I often associate with your work. In your installation and performance, ἐπί ἡμέρα at the University of Oregon’s White Box, (where you transcribed passages and poems on to white paper with white ink, that you had previously collected into several small chapbooks titled The Mine King), you cite a shift in thinking for the residency from “re-searching” to “re-knowing.” You further state, “My idea about re-knowing was simply that it is all too easy to cast one’s net wider and wider and perhaps forget where one’s feet are planted.” To me, this is what the rock tumbler does, or what your brain does; pour in, turn, and return some gems.

LR “Gems” perhaps suggests too much polish on these rocks. The real metaphor of that tumbler is the tossing together of stones like and unlike: they will touch in ways they might not otherwise. They work with the grit to grind each other into beautiful and unexpected notions. All I care about at the moment (and I’m working on a new project that is benefiting from this kind of magic) is the fresh perspective generated by the juxtaposition of otherwise isolated ideas, notions, or passages. The Dewey Decimal System is a fine thing, but sometimes the pages of something in 811 want to have a conversation with something in 838 or 944, say.

When you are talking about the prefix “re-” you are thinking, I imagine, of the fact that this practice involves an excavation? A re-membering or re-reading? Perhaps that I refer or point to? I’m very interested in digging down to the roots of things, but I’m not nostalgic, that’s for sure. As much as I’d like to hang out with Epicurus or Gertrude Stein, I love my iPhone and Google, too. Access to Ideas!

The notion of re-knowing had to do with circling in on things I Know with a capital K about how the world works. In spite of a longtime practice of radical skepticism, I’ve been willing to accept these ideas that are not rational or in any way logically defensible. Re-knowing those things led me to flip my skepticism on its head and to try out instead a ‘Radical Openness.’ Instead of the ‘Show Me’ state, I’m now the ‘Benefit of the Doubt’ state. Not sure how this is going to play out, but to quote poet ruth weiss, “THIS IS REALLY REAL.”

Lisa Radon has exhibited at White Box, Car Hole, Worksound, and galleryHOMELAND. She curated the exhibition Reading.Writing. in 2011. Her book, Sentences on Sentences on Paragraphs on Paragraphs (2011) was published by Publication Studio Book of Knots, a book-length poem, is forthcoming from c_L. She is the editor of EIGHTS

Mack Mcfarland is the curator for the Feldman Gallery and Project Space at the Pacific Northwest College of Art. He is also an artist who creates his home in Portland, OR. McFarland has been quoted as saying, “Wherever I am, I’m making.” His post-studio mantra has taken him to archives, karaoke microphones, canoes, and into his studio.