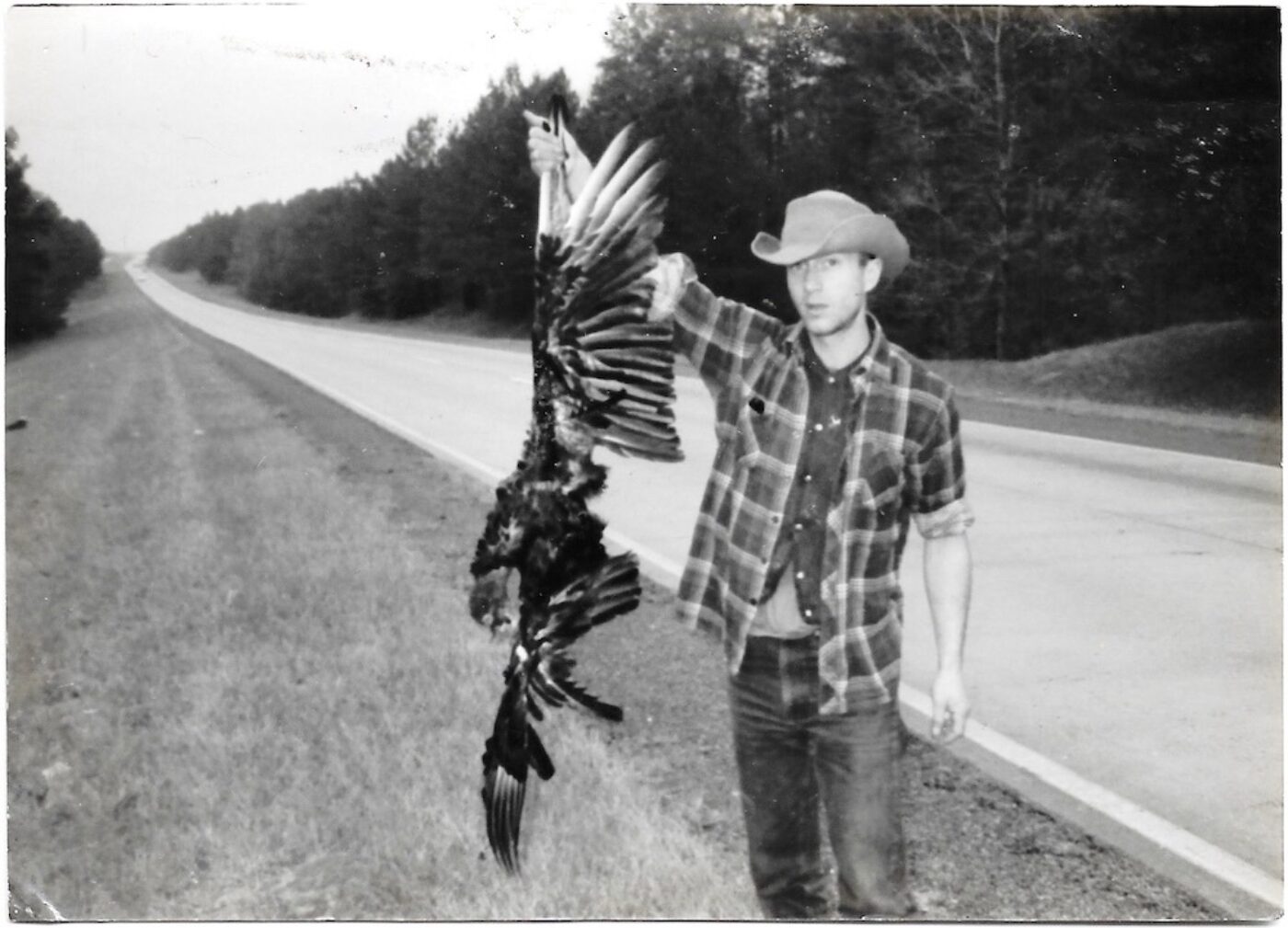 Photo of Joe Schactman, the author’s father. From Negative Space, by Lilly Dancyger, 2021.

In the summer of 1981, about a year after he left his first love, Cathy, because she wouldn’t stop doing heroin, my father hitchhiked through Mexico. He’d been gone about a month when he called the apartment he shared with a bunch of friends in New Haven, to say hi and see how everyone was doing. Bud, one of the guys who lived there, told me decades later that they’d been waiting for his call so they could tell him that Cathy had overdosed and died.

I thought immediately of the moment I found out my father was dead, how all light and sound collapsed in around me. I wondered how he handled that blow when it came for him. I imagined him, a young man out adventuring, skin tanned and clothes dirty. Stubble on his face, smoking hand-rolled cigarettes. Light and free and living his life. And then boom.

Did he fall to his knees on the street in whatever Mexican town he was in? Did he yell “no” over and over again, like I did? Did he think maybe he had misheard, that maybe he could go back and hear it differently? Nobody was there with him, and Bud couldn’t remember who’d actually broken the news, so I’ll never know how he responded.

But I do know that he got drunk and passed out on the beach, and got robbed of everything he had with him—it was a story I’d heard him tell, but without the context of why he’d gotten so drunk on that particular night. I pictured him, sitting in the sand on an empty beach in jeans and a flannel shirt, staring out at the moonlight reflecting on dark waves, wondering what he could have done differently to save her, taking big swigs straight from a bottle of tequila. And waking up in the morning, baking in the sun, his mouth as dried out as the sand, his pockets looted, the memory of the news he’d gotten the day before as harsh as the morning sun.

Hearing his adventure stories as a child, I pictured him as the hero in one of the Westerns he loved so much—his John Wayne impression was spot on—but placing this one in the context of his grief over the death of his first love, he no longer sounded like a cowboy but like a sad, lost boy. Every detail I learned about his life while researching the book I was writing about him seemed to have this effect: bringing him just a tiny bit closer to reality, letting me see him just a little bit more as a person than a myth.

After Cathy’s death, his artwork changed. He abandoned the color palette she had introduced, the electric blues and yellows they used when they painted together, the spray-paints and bold splashes. His friend Mark remembers that everything turned to gray tones and browns—the palette he would primarily work in for the rest of his life. The dark, natural tones of dried leaves and unfinished wood, of concrete and scrap metal and lead.

And this was when he first started making art out of dead things. He’d been working with found objects for a few years, but now he introduced roadkill. He would sneak into the Yale libraries and Xerox dead birds, and then draw over the Xeroxes, creating multi-layered images of women with real bird wings. A black-and-white photo from the time shows him standing on the side of the road, wearing a plaid shirt tucked into blue jeans, a vest, and a cowboy hat, triumphantly holding a mangled dead bird from one wing tip, the wingspan hanging down longer than his torso. His face is boyish and excited, a look what I found! expression. 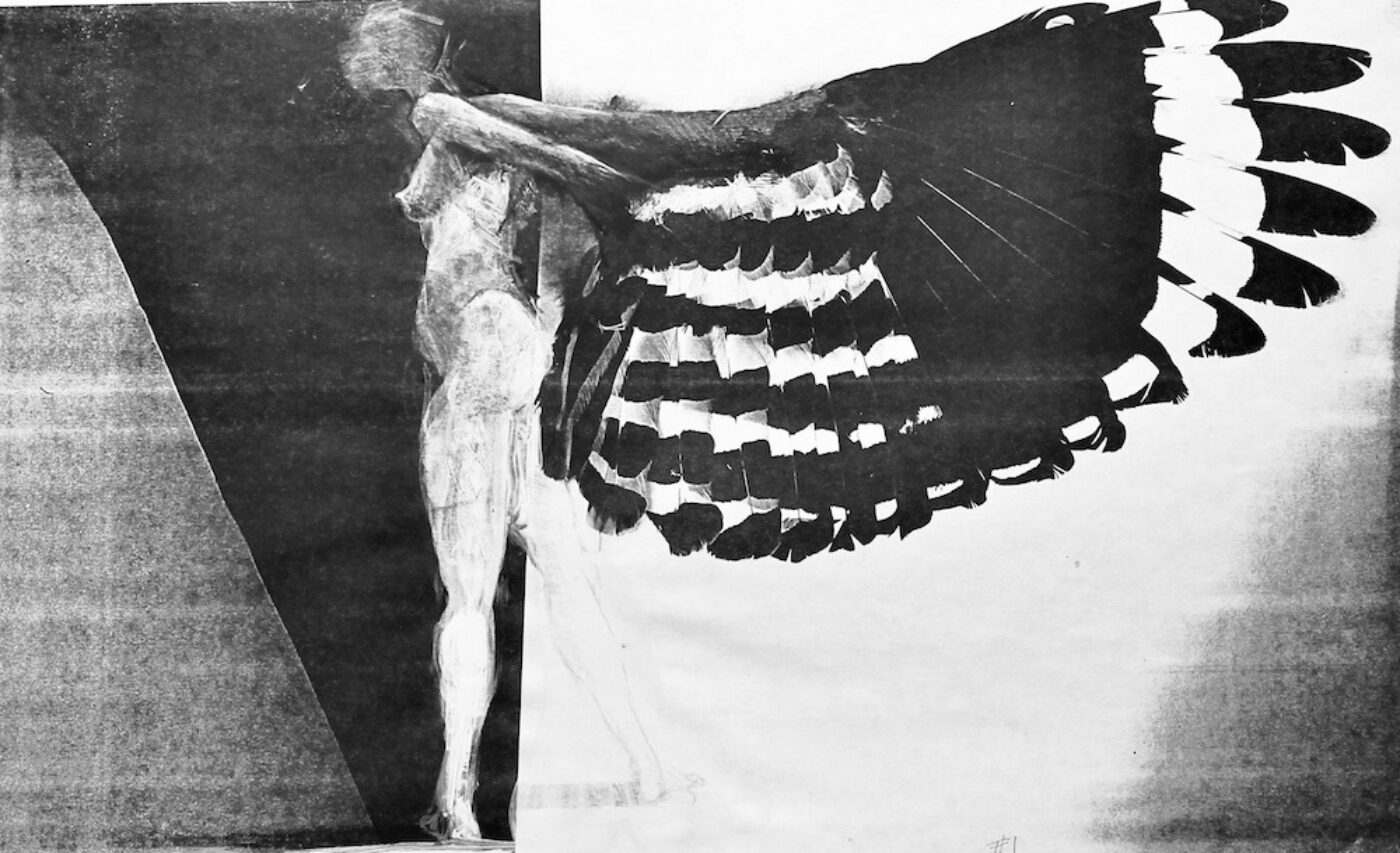 Image by Joe Schactman. From Negative Space, by Lilly Dancyger, 2021.

I once carried a festering bird carcass on a Greyhound bus to make my father happy. When I was nine or ten, my cat killed a hummingbird. I wrapped it in several paper towels, put it in a Ziploc bag, and carried it in my travel bag on the three-hour bus ride I took from the Central Coast up to San Francisco to see my father on weekends. My mom had packed a peanut butter and banana sandwich for me to eat on the bus, but when I saw the two Ziploc bags next to each other, I lost my appetite.

It was worth it though. When we got to his apartment, I immediately took out the bag with the hummingbird in it, careful not to hold it too tightly because I didn’t want to feel its little feet through the paper towels and plastic, and handed it to him. He looked surprised, and a little skeptical, when I told him to open it. As he carefully lifted the paper towels off of the tiny corpse, he let out a breathy, “Wow!”

He was thrilled with the gift. He made a wire cage for the dead bird, which he hung outside his bedroom window so it could decompose without stinking up the apartment. He would eventually turn its bones and wings into sculpture material. 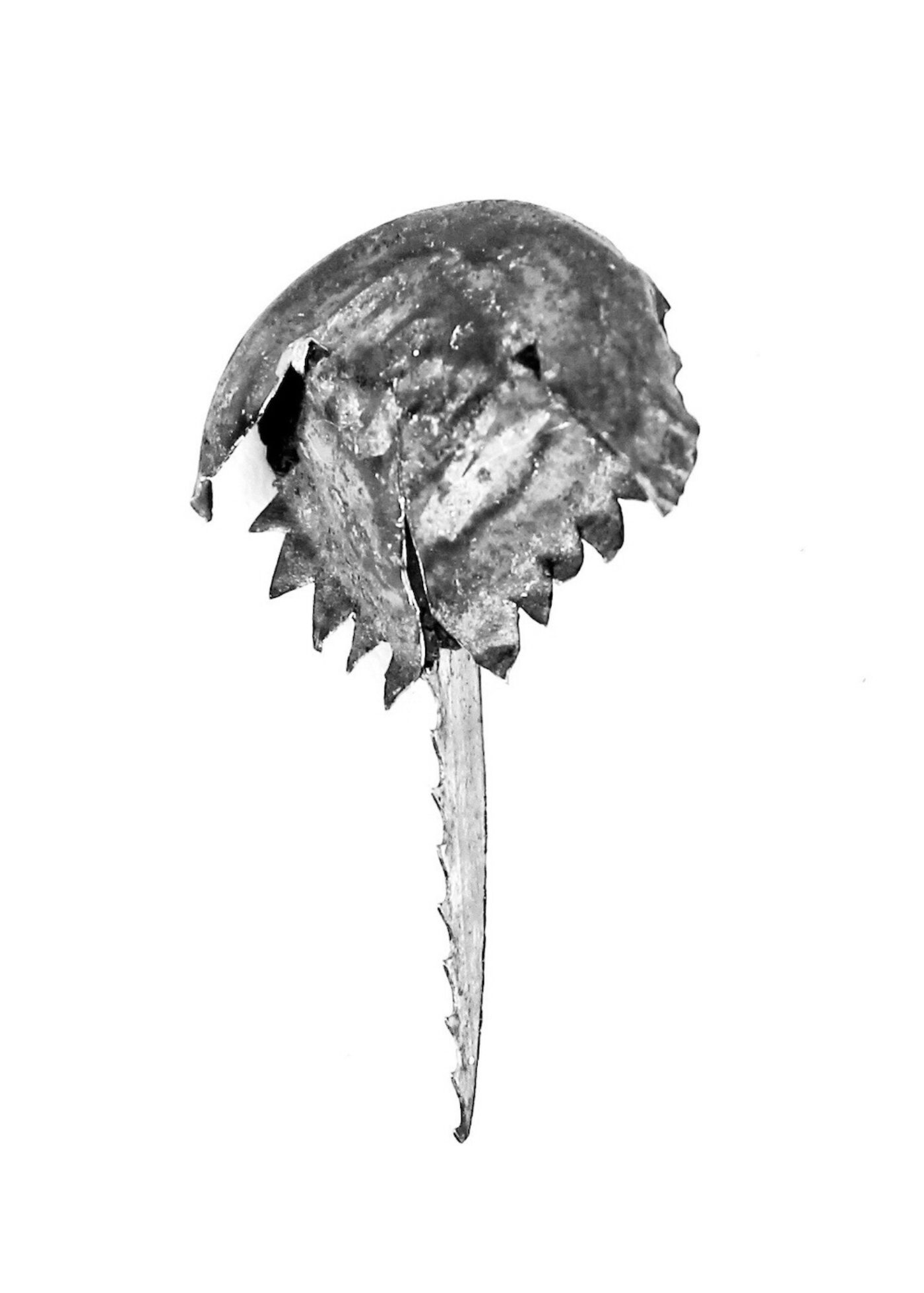 A horseshoe crab pin by Joe Schactman. From Negative Space, by Lilly Dancyger, 2021.

Even after he died, dead things always appear to me as presents for him. I grew up with his ow pins (little horseshoe crab pins he made out of rusted beer bottle caps and razor blades—which I named ow pins because the one he wore on his leather jacket scraped my baby arms when he picked me up), but I didn’t see a real horseshoe crab until I was thirteen, and my father had been dead for just over a year. I was walking along the beach when I spotted it, right there in my tracks: a giant, rotting ow pin tangled in seaweed. Marveling at how accurately nature had imitated my father’s work, I picked it up with an inside-out plastic bag, careful not to touch the sharp spines that used to scratch my skin.

I thought of how happy he’d been when I brought him the hummingbird, his beaming face clear in my mind as I stuffed the mangled, too-fleshy ow pin into my bag, alongside my water bottle and sunscreen. The stench of rotting sea-life was overpowering, especially for a squeamish, vegetarian adolescent girl, but I had to collect this real-life Schactman piece and bring it home, ignoring the cognitive dissonance of a gift for a dead man.

My father did the same thing after Cathy died, his art a series of gifts for a dead woman. He continued the guerilla installations they had started together, making sculptures and then abandoning them, letting them deteriorate. He took a trip out to the woods upstate and left sculptures hanging in trees, photographing them before leaving them to the elements. The process of rotting in the woods was the last stage of the development of these pieces, like paint drying or glue setting; their destruction was their creation.

I always thought that these pieces and his interest in how they changed were all about his enjoyment of materials, his curiosity about how they behaved over time. But learning that this work started when he was mourning Cathy, it felt clear that they were also about loss. He was creating sculptures that would “die,” making his grief tangible.

Before I had ever experienced loss, my father taught me to surrender the things I’d made. When he took the bus down from San Francisco to visit me in Carmel, we walked to the beach that was just a few blocks from where I was living with my mother. Carmel Beach is breathtakingly gorgeous, the kind of beach that’s photographed to advertise California tourism. I loved that beach, but I spent a lot of time there being lonely, resenting my mom and our move to the quiet seaside town, missing my father and feeling like I didn’t belong. But with him there, I felt like it was finally ok to really enjoy this magical place that was practically in my backyard.

We walked around collecting shells for a while, and then started playing a game, at his instigation, where we drew pictures in the sand with long sticks as quickly as we could and then watched them be erased by the lapping waves. I drew mostly abstract shapes, maybe a couple of cat faces, but his trained hand managed to create animals in motion, fleeing the tide. We had only a few seconds for each round of drawing before a new wave would rush over it, soaking our legs and erasing our work like a giant Etch A Sketch. It was a game that involved a lot of shrieking and running, but underneath the playful surface was a valuable lesson in impermanence.

The work he made after Cathy died was about deterioration and letting go, and it was also about holding on. He conjured her, over and over again, in his artwork, by making the things they had once made together. He continued to draw and sculpt dogs, though they were tortured, like he was. He showed them surrounded in darkness, or starved near to death, with their ribs showing. He showed them hanging by the waist from ropes, suspended and helpless. He’d gone from the loyal companion following Cathy to New Haven, to the ferocious guard dog fighting to save her from addiction, and finally ended up grizzled, abandoned, near death. The last stage in the evolution of the imagery of his first love.

As I thought about how much art he made about and for Cathy after her death, I couldn’t help but draw the parallel; I was doing a similar kind of conjuring by writing a book about him: art as a spell to raise the dead. Creating him on the page like he created Cathy in his studio. Writing my grief into these pages to make it tangible, so it would exist somewhere outside of me and I wouldn’t have to drag its weight with me always.

Lilly Dancyger is a contributing editor at Catapult, and assistant editor at Barrelhouse Books. She’s the editor of Burn It Down, a critically acclaimed anthology of essays on women’s anger, and her writing has been published by Rolling Stone, The Washington Post, The Atlantic, Playboy, Glamour, Longreads, The Rumpus, and more. She lives in New York City.

Did You Enjoy The Piece? by Gideon Jacobs 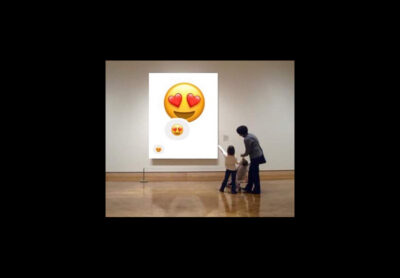 In this short story, an artist father and his son, an art critic, have a dramatic and telling confrontation at a gallery opening.

Make a List of Everything You Have Lost: Claire Vaye Watkins Interviewed by Madelaine Lucas 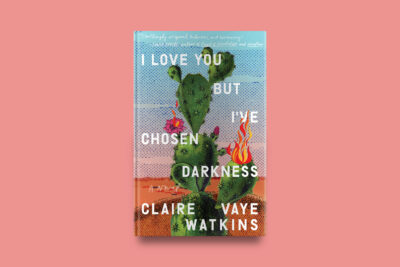 A transgressive novel that careens through the desert landscapes of a childhood fraught with addiction, climate collapse, ties to the Manson family, and more.