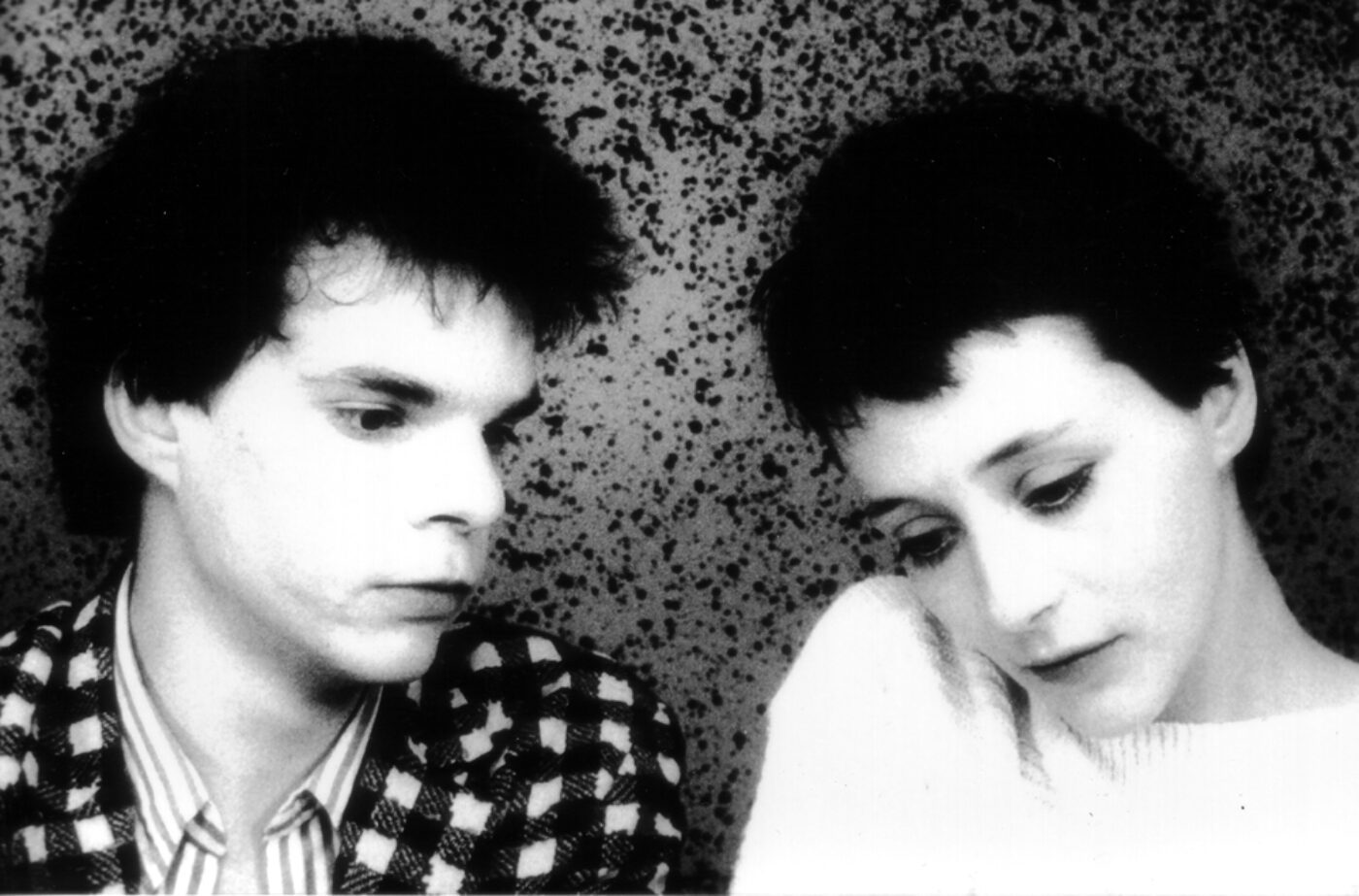 The French director Leos Carax made Boy Meets Girl (1984) at the age of twenty-three. You would expect a filmmaker in such a hurry to get his first feature out the gate to make something that zips past or hurtles forward, a youthful bullet train that leaves you with a smeared impression of shapes and faces and—if all went well—the promise of movies to come. But Boy Meets Girl is a slow movie, moving at a zig-zagging crawl to an inevitable but long-delayed outcome: the meeting of Alex (Denis Lavant), a nocturnal loner betrayed by his girlfriend Florence, and Mireille (Mireille Perrier), left alone on a summer’s night by her insensitive boyfriend. The movie is drawn out by the rich, dark shadows of its black-and-white images—deep pools in which the gaze finds no end—and the way Carax’s constant inventiveness lights up the peripheral action—nearly obscuring the central business of girl meeting boy—with a density of details including a woman driving to the mountains with her skis and ski poles poking through a hole in her windshield, and a man opening a giant empty fridge to kneel before it and cool off.

These images suggest that though Boy Meets Girl is slow as summer, the emotional temperature is wintry. Faces glow with artificial light on powdered skin, not the sheen of sweat. If Rainer Werner Fassbinder hadn’t thought of it first, Boy Meets Girl might be called Love is Colder than Death. Its conclusions on the subject of love may be its most obviously youthful element, a blending of cynical lucidity and atavistic romanticism into a fatalistic trajectory. Before the boy meets the girl, torpid Paris seems to brood with domestic quarrels and romantic betrayals that bleed through walls or explode on the banks of the Seine. The one perfect picture of love is too perfect: a man and woman turning on the Pont Neuf in a slow-mo kiss so artificial that Alex tosses them some coins. A harsher view of coupling comes with the protracted discussion between Alex’s unfaithful girlfriend and her new man. Without using a single word that couldn’t be spoken in a Sunday sermon, the two engage in a meticulous discussion of the methods of oral sex. Heard in voiceover, their words paint a portrait of isolation in sex and selfishness in love. Sex trivializes love.

This is the emotional landscape against which Alex finally meets Mireille, following a romantic’s faith in coincidence to track her down after hearing her voice on an intercom. Once they meet in the kitchen at a society party populated by zombie-like semi-celebrities, the movie shifts into a new phase and settles into a long one-on-one. The periphery vanishes and suddenly words come quickly. But this is not your typical blushing love scene—Carax avoids standard film syntax, moving through a series of increasingly original shots, his frames growing as timelessly radical as Dreyer’s in The Passion of Joan of Arc, so that the unavoidable declaration of love is spoken by an out-of-focus face to one in half-light. The care the director lavishes on his set-ups and poetic dialogue suggests that the love with which he is most concerned is the love of cinema. His slowness is that of a young lover, not tentative, but still making a conscious and surprised effort to take in everything about the one he loves: the freckle on the upper lip or the small but elegant fingers. 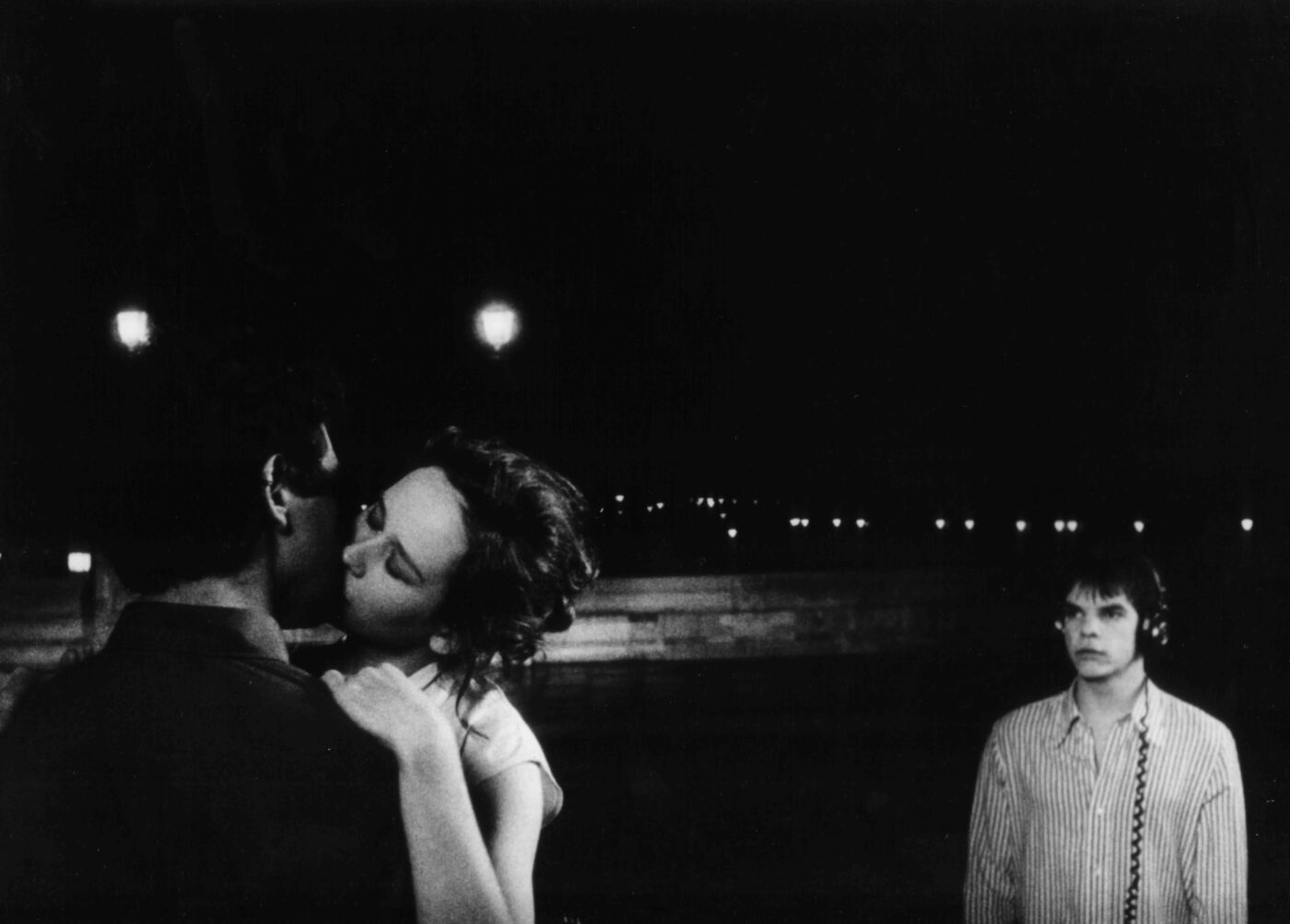 In a typical example of Carax’s dry, slightly surreal sense of humor, an earlier incident at the party finds an elderly man using sign language to tell Alex that the problem with the young generation is that they are too quiet. When Alex tries to explain himself, the deaf man hushes him and keeps signing, telling how he pushed the first tracking shots in the silent cinema. Carax is a product of Jean-Luc Godard and the miraculous period of French silent pictures that were a constantly dynamic mix of experiment and commerce, artifice and reality. He has Godard’s electroshock associative sharpness of montage; the sense that everyone who passes through the frame has a purpose, even if it’s only a shtick (there are no extras); and that punctilious use of sound that can be both alienating and uncannily intimate. The point the deaf man drives home is that sound in film has to do more than earn its keep by providing exposition—you get everything you need to know about Alex from the map of Paris he draws on the wall of his studio apartment, writing in the milestones of his young life (a lovely instance of Carax’s balance of poetic invention and narrative intelligibility). The sound in Boy Meets Girl is every bit as ingenious as the photography: certain locations seem selected for their audio environment (a room full of scanning photocopiers, a café resonating with the pings and pongs of a pinball machine) and certain situations to provide sound that surpasses dialogue (the final conversation between Mireille and her boyfriend takes place over an intercom, emphasizing the distance between them and drowning their words in the Dead Kennedys’s song coming over the intercom with Mireille’s voice, then Alex’s thoughts as he fills in for himself what the boyfriend should say). Carax makes such unusual use of sound that when boy finally meets girl and the talk flows fast and flowery, there is a sense of novelty to the words, though the dialogue is as theatrical as in the early talkies.

Many have gone against cinema’s innate theatrical nature by taking a camera in hand and getting in the subjects’ faces, mimicking documentary while overlooking the fact that a trembling camera is as much of a reminder of the cinematic apparatus as a studio set with a fake moon painted on a flat. These various gestures are dictated by the filmmaker’s intention regarding the world he wants to represent: is he striving to “capture” the world we all live in or is he inviting us into a world of his own making? Carax creates worlds. He embraces artifice, as Boy Meets Girl makes explicit when a shot of the stars turns out to be the spackled floor on which Mireille is tap-dancing. Carax is one of the most important filmmakers of our time because his artificial worlds increasingly reflect the “real” world. His latest feature, Holy Motors (2012), presents a bitter, sorrowful portrait of our era—one where the artifice has caught up with the artificer and the lover of cinema has become a mourner of celluloid—yet it is a constant joy to inhabit because Carax’s inventiveness prevails as a force of resistance. Holy Motors gives us the hope that grim circumstances can still elicit great art, which may in turn be the first step to overcoming grim circumstances. Perhaps the young artist Leos Carax, already a great melancholy elegist, embraced slowness in Boy Meets Girl because he knew the future was coming fast enough. In any case, he left us this luscious reminder that slow can be the furthest thing from boring.

Nicholas Elliott has been the New York correspondent for Cahiers du Cinéma since 2009 and is Contributing Editor for Film at BOMB.