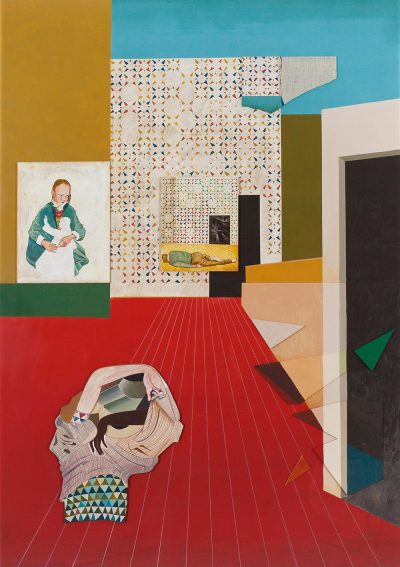 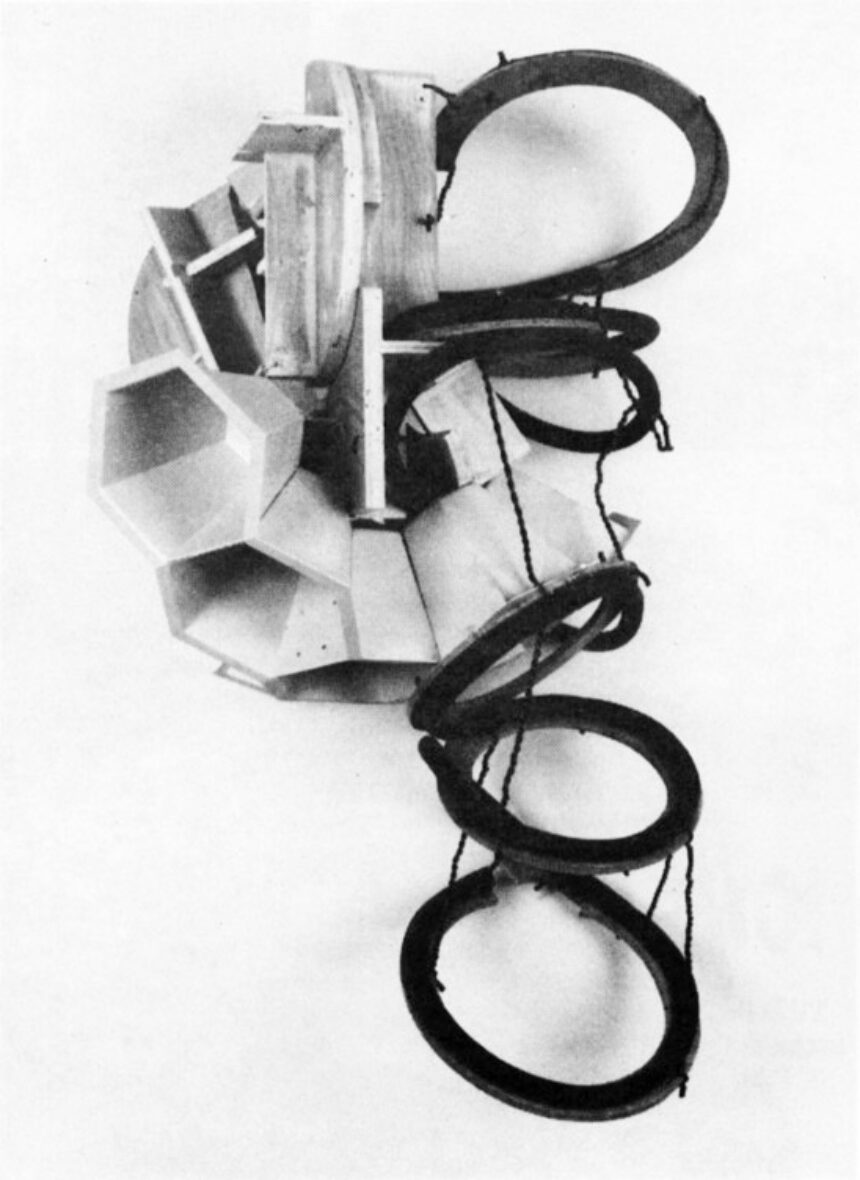 Kenji Fujita’s sculptures of rubber, painted and unpainted wood, plastic, sheet metal and wire, hang off the wall in a refined play on a visual language. Dry and witty in their self-containment, they are at ease in the world. The sculptures are a record of their own making, traces of choices made and unmade that form a continuum of completion and beginning through materials that, under other circumstances, would be considered expendable—cheap, utilitarian and replaceable. It is the choices made and the choices left behind that give these pieces their poignancy. And the fact that they accept the seeming inconsequence of their existence with the stubborn and elegant image of their being, that gives them their grace.

Betsy Sussler You just said that, “My work becomes a record of an engagement with the world.” Does this engagement take the form of play?

Kenji Fujita Yes, I like to have an ample supply of forms that I use, which includes circles, ellipses, hexagons and squares. Because these parts are inexpensive to produce and don’t have an aura of preciousness, it’s easy to choose, combine, eliminate, paint and repaint. That’s where the element of play comes in, I have enough cheap material to feel free to make mistakes, so there’s less pressure to get it right the first time. And so, the “record of an engagement” is not only a record of mistakes corrected, but also a record of the choices not made, the unused shapes still lying in a pile on my studio floor. That becomes a counterpoint to the sculpture that is now “finished ” through negation.

BS The forms play off of each other, hence are dependent upon each other. Entrenched Meander is your most perfect title, I found, because it reflects that dichotomy between the void of infinite possibilities and the commitment of choices made.

KF I got the title when we were traveling through Southern Utah and came upon a river called the Goose Neck. One of those information plaques described its unusual appearance as an example of “entrenched meander,” a winding river that looks like it sank into the earth by etching itself through numerous layers of rock and soil. But yes, I like the implication of wandering in place. From afar, my work always shows the promise of—the look of cohesion but as you get close that falls apart, reflecting a number of permutations that the piece went through to get to that final image.

BS When you have the opportunity to be engaged, amused or intrigued by the relationship developed, is that when you keep that part as a given to build upon?

KF Sometimes. It’s possible that what the pieces end up looking like, is both a reflection of allowing the work to take a direction of its own and having the will power to point it in one direction and away from another.

BS I look at your work and think of infinite circles that go over the same material at different points in time.

KF Or like a maze in which one wants to go from one point to another but keeps getting lost and ending up at the same point. What’s interesting is the route taken, and how one re-experiences the point that one reluctantly returns to.

BS Why those materials?

KF I started out with wood which is pliable, easy to use and cheap. Then I started using rubber and cast hydro-stone because I wanted actual material differences. Those differences make it possible to think about the work as a process of putting a kind of meaning together out of different parts.

BS Property differences. Have people ever likened your work to sentence structure—to writing? It’s like poetry.

KF I don’t know. I use simple geometric shapes repeatedly. A language which is precise and intelligible but also limited; and make objects which transcend that language without destroying it.

BS Like an alphabet, they are anonymous as forms. So one doesn’t infer meaning outside of the work itself.

KF Even though people make associations to plants, machines and models found in a science classroom, there is no willed program to accomplish anything. In other words, the association always follows the completion of the sculpture and is part of the act of interpretation.

BS Do you feel uneasy or unfamiliar when you work on these? They seem so cerebral.

KF Well, they are at once contained and uncontained. When I work on them there’s always a moment when I feel at home with them but that sense of calm is tenuous, and dependent on the cooperation of all the parts that hold it together. Take away a few of those parts and the whole piece comes undone. They do seem cerebral, but also fragile, like a house without walls.

BS Play, to me, is subversive, and gives one an emotional or ironic distance. It’s like the fourth wall in theater, another dimension.

KF Yes, but the work isn’t really ironic. The irony is subsumed by a desire for a kind of integrity and partly by the fact that I want to make something beautiful.

BS There’s something very kind about taking these anonymous, ubiquitous and, in some instances, negligible materials and making something beautiful with them.

KF They’re all from the same order—sheet metal, and cast plastic and rubber and wood all occupy the same level of importance or non-importance. Even though I make these objects, which from a distance try to appear beautiful, you get up close to them and you also see the blemishes, the screw marks and putty holes and cuts into the wood; what could have been. They’re held together with wire and cheap materials. Everything is revealed and flexible so what starts out as something that appears serene and coherent at a distance breaks down at close range.

BS There is a responsibility to choice that is a sort of noblesse oblige.

KF Maybe because my work looks like an image arrested from perpetual motion. Getting back to this idea of play, it’s like the children’s game when someone yells, “Freeze!” and your freely moving body stiffens up into an uncontrolled pose. But there’s always a split second between the shape that your body is supposed to take and the shape that you show to the others. That split second between the image that chooses you and the image that you choose may have something to do with how I think about my sculpture. 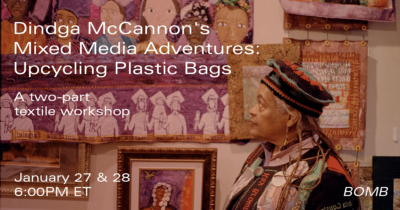 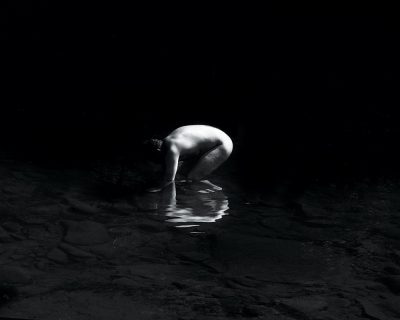 In Mark McKnight’s photographs, the material of the terrestrial world merges with a celestial aspect. Dark bodies, asphalt, oily birds, decomposing stone, and dimpled flesh all radiate from a field of tarry shadow. 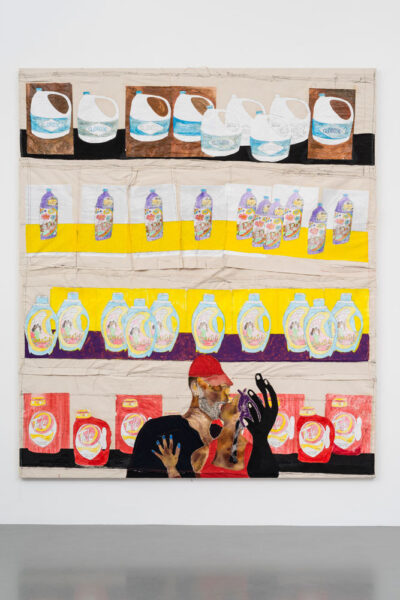