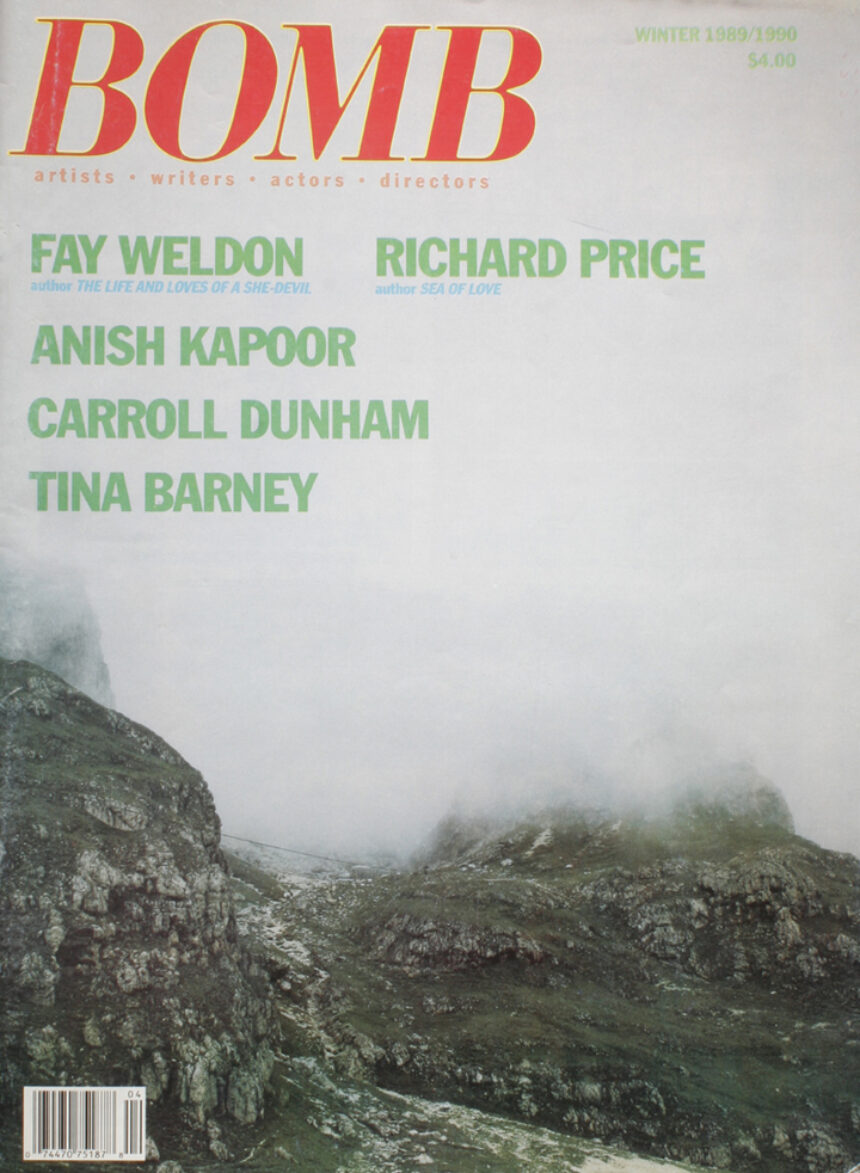 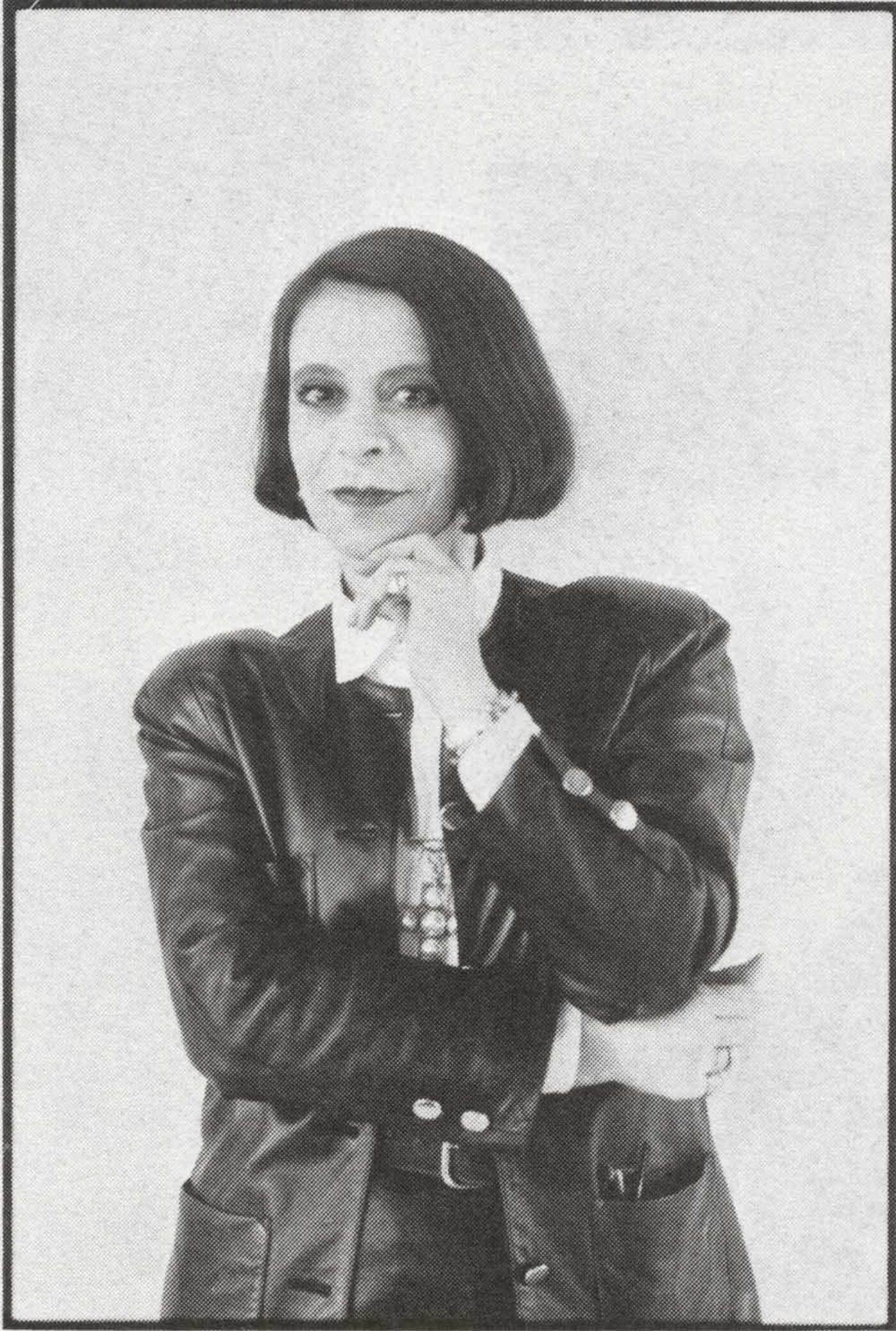 Katell le Bourhis has worked at the Costume Institute of the Metropolitan Museum in New York since 1981. She is currently working as the Commissaire for an exhibition entitled, The Age of Napoleon: Costume from Revolution to Empire, scheduled to open this December to coincide with the bicentennial of the French Revolution.

The interview took place in her office in the basement of the Metropolitan Museum, which she calls her “sanctuary.” Closed off from the business-like reception area, it is a museum within a museum. High ceilings, red-lacquered walls, and a profusion of books, paintings, posters, images and objects: it reflects her immersion in the period she is working on—the 26 years immediately following the storming of the Bastille. Seated on a leopard-print draped chair, she is the lioness in her den. Her immaculate red suit, red lipstick and red-lacquered nails match perfectly the red of the walls. Her fair skin is framed by dark, bobbed hair and animated by her serious, yet lively eyes. Her style is a hybrid of classic French chic and witty flamboyance. She’s a woman’s woman—passionate and self-invented.

It’s not surprising that the three great influences in le Bourhis’s life have been strong-willed women. Her mother and grandmother imbued her with a sense of culture and independent thinking. “My mother taught me to express my ideas and impressions,” she says, “and not just to touch on the superficial but to penetrate the surface.” When her grandmother spoke of seeing Mistinguett, Sarah Bernhardt, and Josephine Baker on the stage, the images created were real for her. In the old house in Brittany, the atmosphere was a creative one. “I grew up quickly in the attic of my mother’s house,” le Bourhis says, half jokingly, “reading all the old magazines which were never thrown away, but stored in numerous trunks. There was no TV which meant that the life of the imagination was very important.”

Le Bourhis took a circuitous route to Paris. She studied law because art, which she would have preferred to study, was not something her mother felt one could learn in school, rather it was “absorbed with life.” Law was more practical, but for le Bourhis, it was the vehicle which brought her to the cosmopolis where she worked with the designer Daniel Hechter. She designed theater costumes and worked on film documentaries, for which, she says, she used a cultural history rather than a journalistic approach.

A love affair brought her move to New York around 1978. She laughs now saying that it was a “disaster!” Through sheer determination, she seized the opportunity and turned a bad situation into a good one. “It forced me to make my way, all alone, in a city that was not my own. Actually it gave me freedom. It strengthened me.”

It was in New York that she met another woman who was to become a strong influence on her life—Diana Vreeland. Introduced socially, it was not long before Mrs. Vreeland asked le Bourhis to work at the Metropolitan helping her as a Research Associate for the costume exhibitions. The first show she worked on was The 18th-century Woman in 1981. “I learned from Mrs. Vreeland the real meaning of hard work,” le Bourhis says, “but also, and as importantly, she taught me what it means, ‘to dare.’”

In speaking of “dear Madame,” as le Bourhis affectionately refers to Mrs. Vreeland, it becomes clear that she has learned many other things as well. “A point-of-view is non-negotiable.” “If one’s ideas are well-thought out, they must be expressed no matter if, and especially if, no one else shares them.” “Always look for the ‘next reality.’” “Above all, one must not lose the sense of play.” Le Bourhis has inherited the passion. She has also learned to decipher the cryptic, often surrealistic method in which Mrs. Vreeland communicates, which she and her colleagues refer to as the “KGB work.”

Robert Lefèvre, Napoleon in His Imperial Costume for the Coronation of 1804, 1806, oil on canvas. 2

“I was working on the St. Laurent retrospective and looking for paintings that would be appropriate for the exhibition. Mrs. Vreeland had an idea that I should include ‘The Maiden of France’. I know her mind so well that actually I can understand what she means, or if not, I just ask her. But this time, perhaps because I am French, I was too embarrassed to admit that I had absolutely no idea what she meant by ‘The Maiden of France’. I was in France shortly after this, still trying to puzzle it out when I called Mrs. Vreeland and mentioned that I had been that day at the Louvre to look again at the early 19th-century paintings. “Ah,” she exclaimed, “so you have seen The Maiden!” It was just as though she was speaking of an old friend of hers. It then hit me that she was referring to the painting by Ingres of Joan of Arc. I still did not see the connection between the painting and the show. “Well, don’t you see,” she replied, “Joan of Arc was accused of practicing witchcraft because she wore men’s gear, and St. Laurent has helped liberate women by giving them the pants-suit.”

She credits Mrs. Vreeland for conceiving and supporting all the ideas for the 15 costume shows to date. “When she was no longer able to come to the office, she became my spirit. She created an ambiance in the costume exhibition galleries in which the clothes were perceived with paintings, music, and perfume. Many people are doing this now, but she was the first. Diane Vreeland was the first to add a Zeitgeist quality to the display of costumes in museums.” 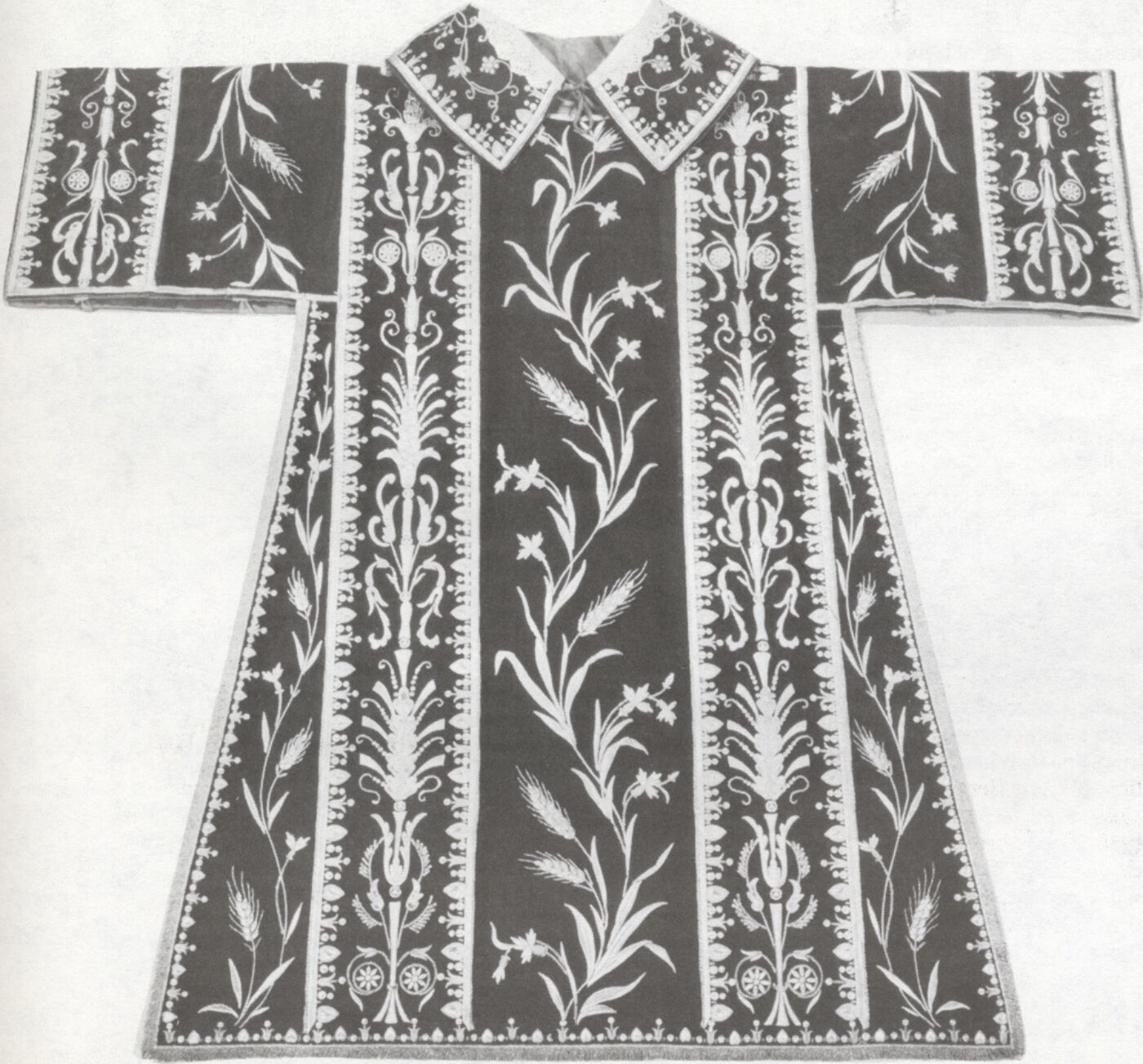 When le Bourhis speaks about her current project, her posture changes. The air becomes electric. There emerge the graceful images of ghosts from another time. “The Directoire was the triumph of the neoclassical style in its purity … . all the white, all the cotton, translucent, transparent, embroidered white. Everyone in white trains and cashmere shawls and white dresses. All the women who had been wearing bodices and whalebone are suddenly with no corset, wearing the most transparent mousseline dresses and looking like Grecian statues; walking half-naked, so-to-speak, in the Palais Royal of the Tuileries. Here come the apex of the eccentrics, the “Incroyables” and the “Merveilleuses.” Ladies wearing red wigs and jockey hats with long visors and a veil hiding their faces. The young men wore drooping grey hair to look old and walked bent and hunched-over, carrying walking sticks shaped like old branches. It’s an extraordinary period. Sociologically, it’s a very sexually positive period as the 1920s were and perhaps also the 1960s. There was an incredible relaxing of morals after the horror of the Terror and the collapse of the Bourbon dynasty and the values of the Ancien Regime. You know, people were no longer going to buy brocaded fabric for their dresses as with the storming of the Bastille, it became a symbol of the Ancien Regime. To set the new Republic as well as the First Empire, a new identity had to be found in clothes—and this was achieved by fashion imitating the ancient Greeks and Romans and reflecting the new political regime. And so went the classical influence in the arts and a revolution as well in fashion. Don’t forget that fashion is not frivolous but an image projected by a society at a certain time—fashion, therefore, is an intrinsic part of cultural history.” 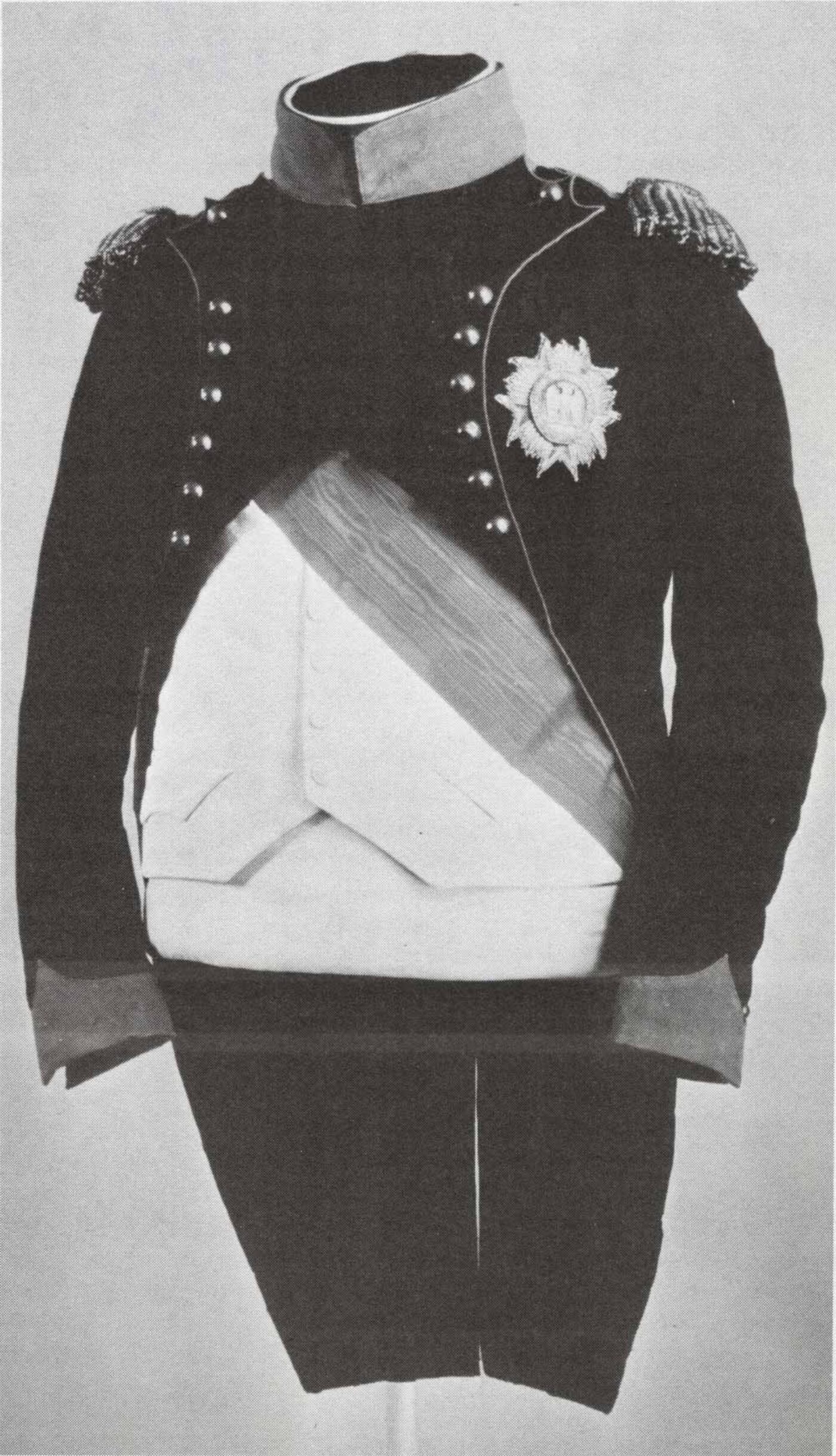 Coat of a Colonel of the chasseurs a cheval of the Guard, worn by Napoleon, ca 1813-15. Given by the Emperor to his mameluke Saint-Denis, called “Ali,” in Saint Helena. Epaulettes of gilt silver, star of the grand eagle of the Legion of Honor in silver; brass buttons.4

A glance at her watch brings le Bourhis back to the work at hand. She is overseeing the photography of costumes for the catalogue which will accompany the exhibition. There are books piled everywhere, open to fashion plates, so that facts can be checked. “How did she hold her shawl? Did she pull the gloves up or wrinkle them down on the wrist?” The work is laborious, but le Bourhis insists it is also great fun.

Undressed mannequins stand in the hall waiting to become courtiers of Napoleon’s new regime or to animate the neoclassical garden room in their flowing white dresses. There is an eerie quality to their facelessness and ready postures.

Within this other worldly atmosphere, le Bourhis is firmly situated in the present. As the likely heir to Vreeland’s cultural legacy at the Met, she looks to the future through eyes enlightened by the past.

“Historically, the fin-de-siècle is traditionally a period of great change and upheaval and a rich point for cultural and art history.” But of our present “fin-de-siècle,” she asks, “Where are the great ideas? Where is the daring and spontaneity? Where are the peaks of beauty found in the pinnacle of decadence in a dying century? In that sense, decadence should not be overlooked pejoratively. Don’t forget, dying beauty is often the apex of creative beauty. We are living in a time of no leadership. There are no role models, and people feel insecure. We look back at what we have done in the last century and are frightened. It is not an atmosphere conducive to the blossoming of creativity. I think this is, unfortunately, typical of our century. Well, we still have at least ten years to go—let’s hope.” 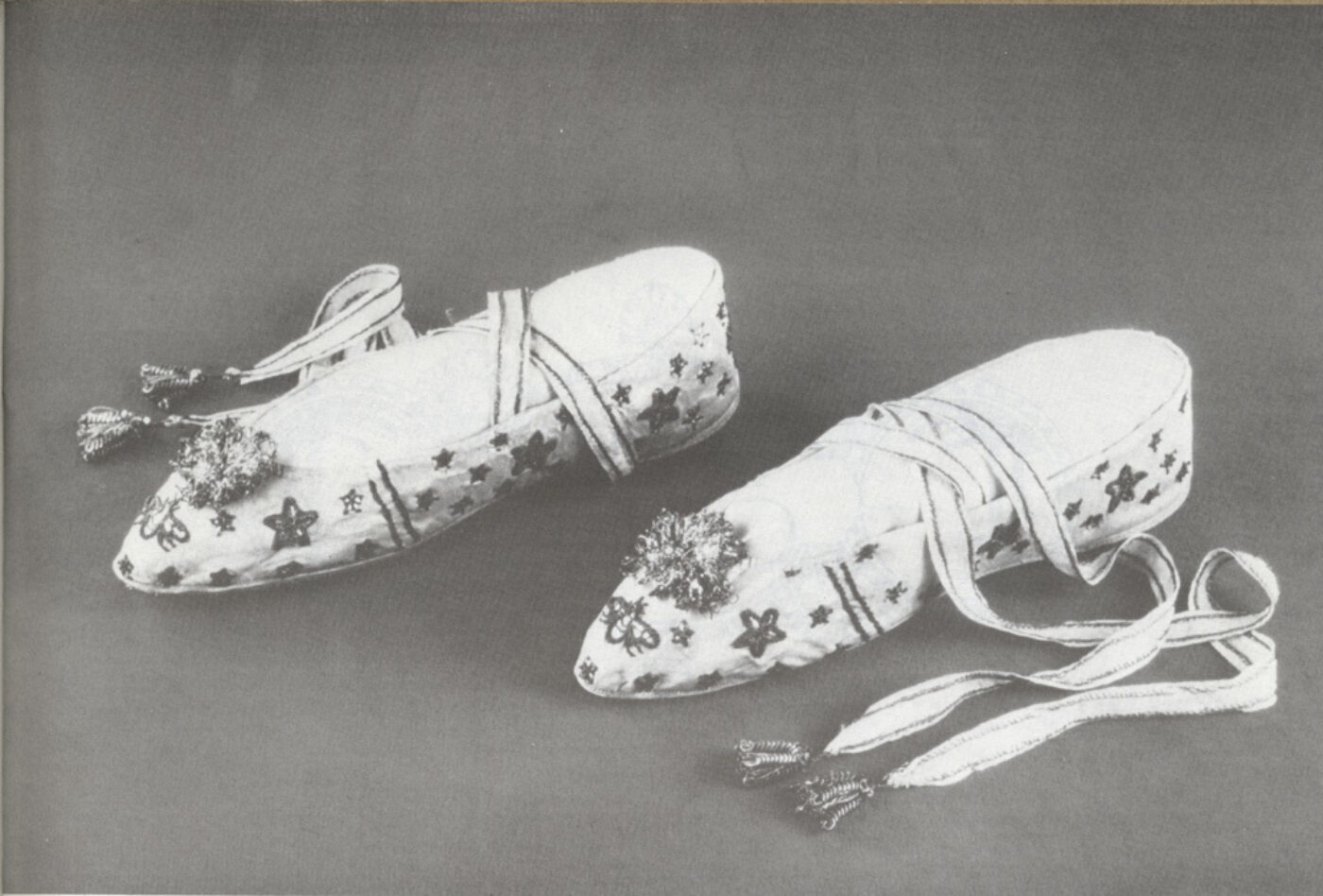 Nevertheless, she is emphatically not nostalgic. Le Bourhis approaches life with profound energy and refreshing curiosity. For after “The Age of Napoleon,” she is already planning the exhibition of the “Theatre de la Mode,” which was first generated in 1945 in France by the Chambre Syndicale de la Haute Couture to raise money for the war relief and to show the world that the impeccable creativity of the French couture was still very much alive after the war years. All the French couturiers and marchands de mode joined together with the artists of the time, such as Berard and Cocteau, to create stage settings for 230 dolls (of one-third human size), all dressed in the latest fashion of 1945. The representation of the Theatre de la Mode is a combined effort of friends and three museums: the Maryhill Museum in Washington State, where the fashion dolls mysteriously ended up in 1946 and were miraculously discovered in 1983; the Musée des Arts de la Mode in Paris, where the Theatre de la Mode started its life at the Pavilion de Marsan in 1945; and the Metropolitan Museum in New York City, which was the first to welcome the Theatre de la Mode in America in 1946. We are looking forward to seeing the fruits of her labor.

Revolutionary buttons mounted on brass with miniatures painted on bone under glass.6

All Images except for Katell’s portrait from exhibition The Age of Napoleon: Costume from Revolution to Empire at the Metropolitan Museum of Art, December 4, 1999–April 15, 1990.

1 Lent by the Kimbell Art Museum, Fort Worth, Texas.

Elizabeth Cannon is a Couture designer and the Fashion Editor of BOMB. 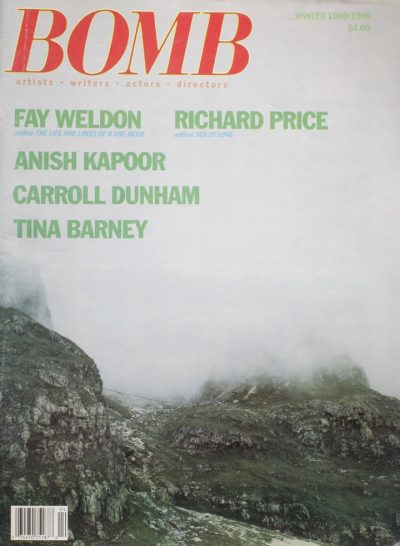