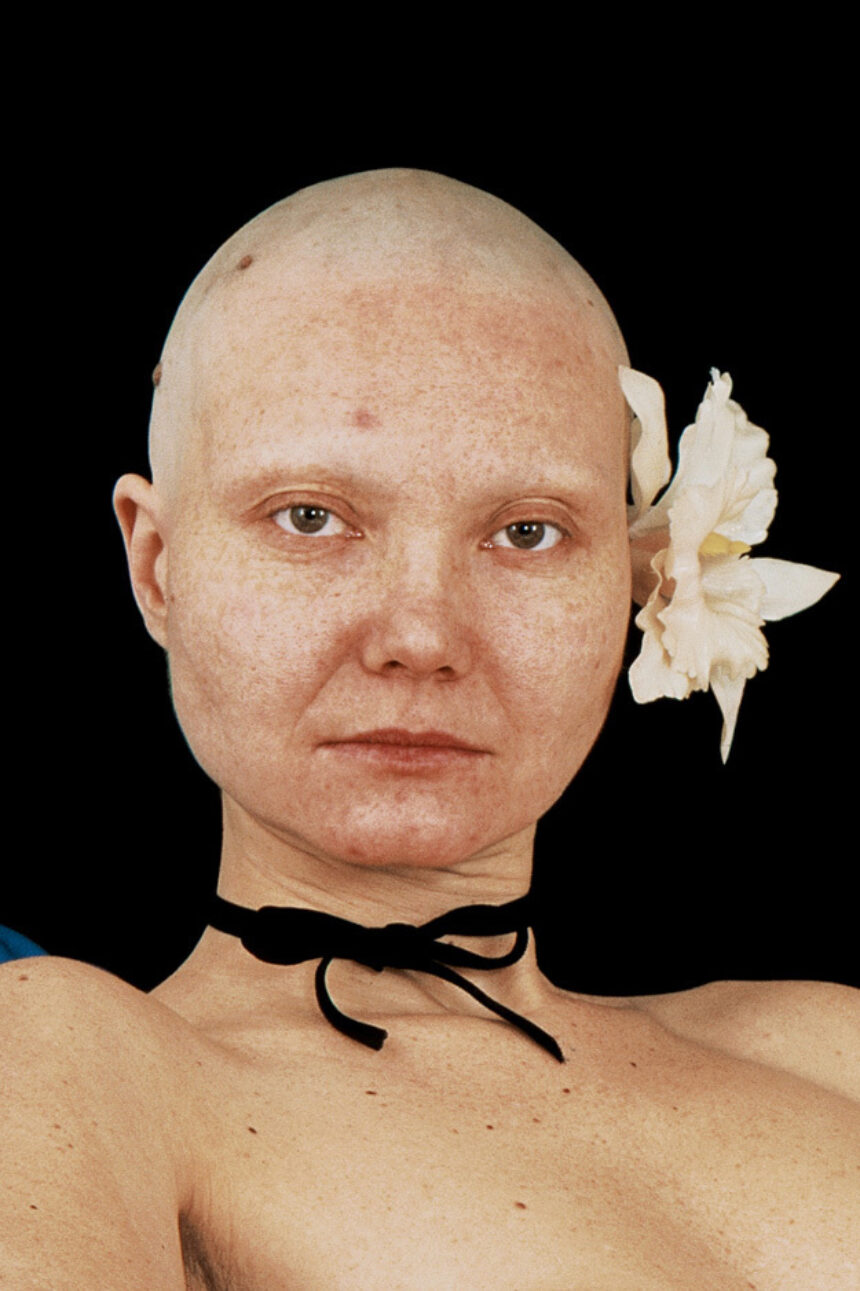 I first met the Polish video artist Katarzyna Kozyra at a “herring party” in Warsaw, hosted by the curator Joanna Klass who introduced us. At the party, Kozyra didn’t talk much and left abruptly after saying she felt sick. For many years, I have carried mental images of Kozyra’s striking self-portraits as Olympia (1996) in a hospital bed: the image is a specter of beauty and illness that has haunted me since the time I initially laid eyes on it in 1997 on my first solo trip back to Poland since my family’s emigration when I was young. The image was like a friendly ghost; Kozyra had made a deep impression on me with her unflinching directness, a mix of sexual playfulness and illness that brought to mind the AIDS epidemic and its fallen heroes. Her almost translucent body was an exponent of a moment in Polish history that—all things considered—felt like recovery.

Kozyra’s work has sparked dialogue and controversy over the past three decades. I spoke with her after reading the catalogue for her Casting (2010) project, in which she recounts her life in hopes of finding an actor to play her in a movie.

Katarzyna Kozyra I remember you, but you didn’t have glasses when we met.

Zbigniew Bzymek They’re called “office” glasses. You can read a book and look at a computer screen—they have double focus.

KK And what are you reading?

ZB Oh, wait—I just grabbed this. (holds up Foucault’s The Birth of the Clinic)

KK I haven’t read Foucault at all.

Well, give it to me.

ZB I pulled something out here. I don’t want to impose. I mean, I’m going to impose.

KK All right, all right.

ZB(reading from The Birth of the Clinic)

One of the tasks of medicine, therefore, is to rejoin its own condition, but by a path in which it must efface each of its steps, because it attains its aim in a gradual neutralization of itself. The condition of its truth is the necessity that blurs its outlines. Hence the strange character of the medical gaze; it is caught up in an endless reciprocity. It is directed upon that which is visible in the disease—but on the basis of the patient, who hides this visible element even as he shows it; consequently, in order to know, he must recognize, while already being in possession of the knowledge that will lend support to his recognition.

What I like most about your work is precisely this breaking or changing of perspective, and doing it in public in order to learn something about oneself from the outside. Would you say that’s right?

KK Well, exactly. But it’s also the other way around: so that others can also see themselves from my perspective, this kind of interpenetration of each other. Otherwise, it’s just talking about yourself. It doesn’t turn me on. For example, with In Art Dreams Come True (2003–8), it’s about other people, to validate me and for me to see myself through their eyes. 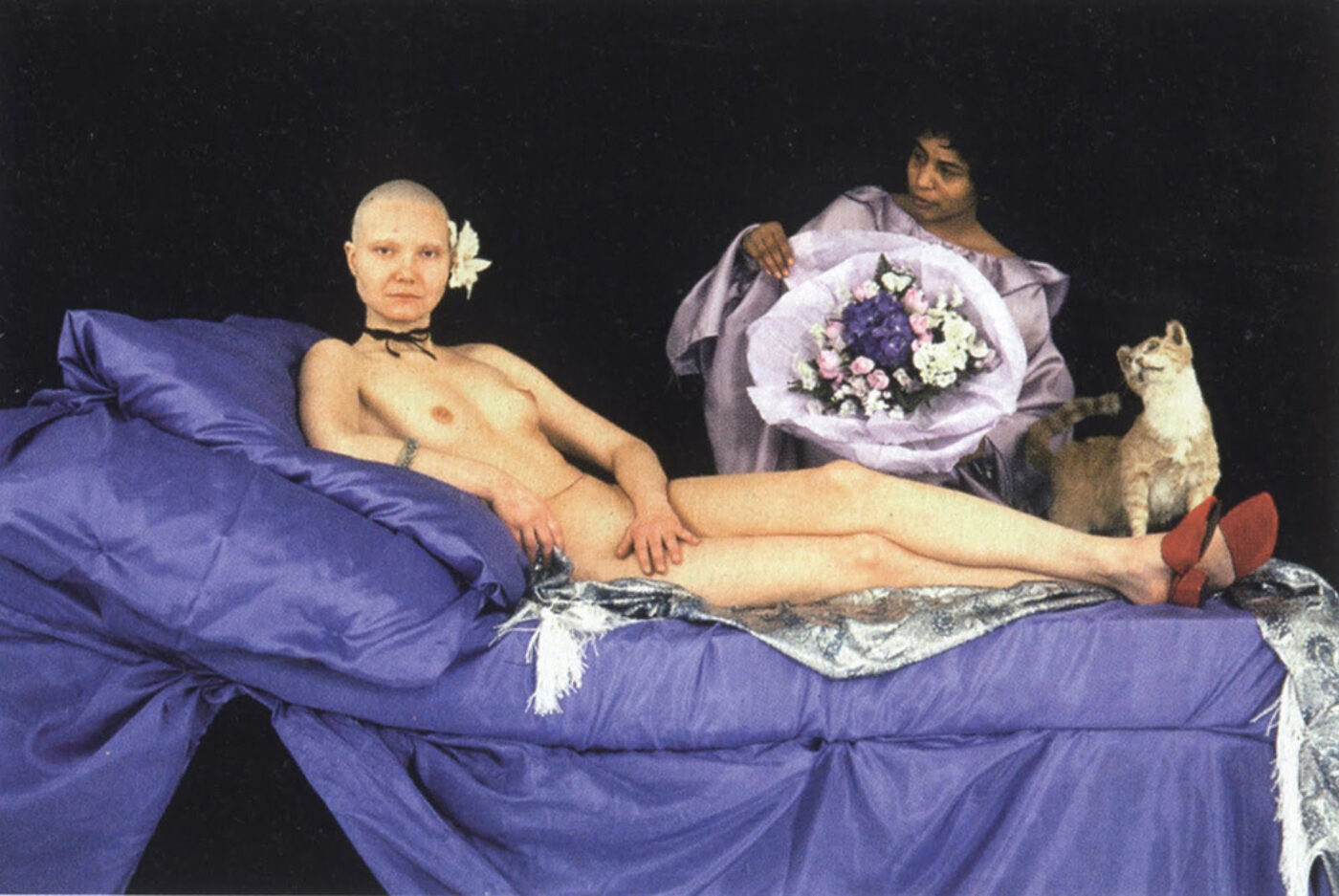 ZB In your work you often decide to show, you know, all—the other side of things—which is what, in the movie biz, for example, they tell you that people don’t want. They try to get you to hide the truth or expose a prepared version of it. They don’t like people who show this other, messy side.

KK They don’t like it because they prefer the sugarcoating and husk that they watch on the TV box, not the reality. They don’t care about real life, because art, in their opinion, is a painting with the title “hang me on the wall.”

ZB Exactly. That’s why it makes sense to me that you are working with illness, because it’s something that just happens to us, but we are told to be embarrassed about it.

KK I just don’t feel disease in a shameful way. It is part of nature. Period.

ZB That makes sense, because you complicate it further. From what I read, you had a relationship with the doctor treating you.

ZB I mean, I imagine a sexual relationship.

KK Yeah, but at the moment it is a friendship. Just today we were talking.

KK Well, we were linked in every which way. He did everything to cure me so that I would be alive and healthy. He’s on his side, with all this apparatus of medical knowledge, and I’m on the other side, with my body and disease. If I’m catching this Foucault correctly, it intersected somewhere. That is the point, right?

My willingness to completely surrender to him on all levels seemed obvious, because he was a body guy at the level of cells, metabolism—that is the basis of biological being. But there is also the body as bodily subjectivity, mine alone. In the German language—I studied German—they distinguish between “Leib” and “Körper.” The first one connotes a more sentient, living body, and the second connotes a more physical body (a lump of flesh, an organism). Doctors are concerned with the latter. 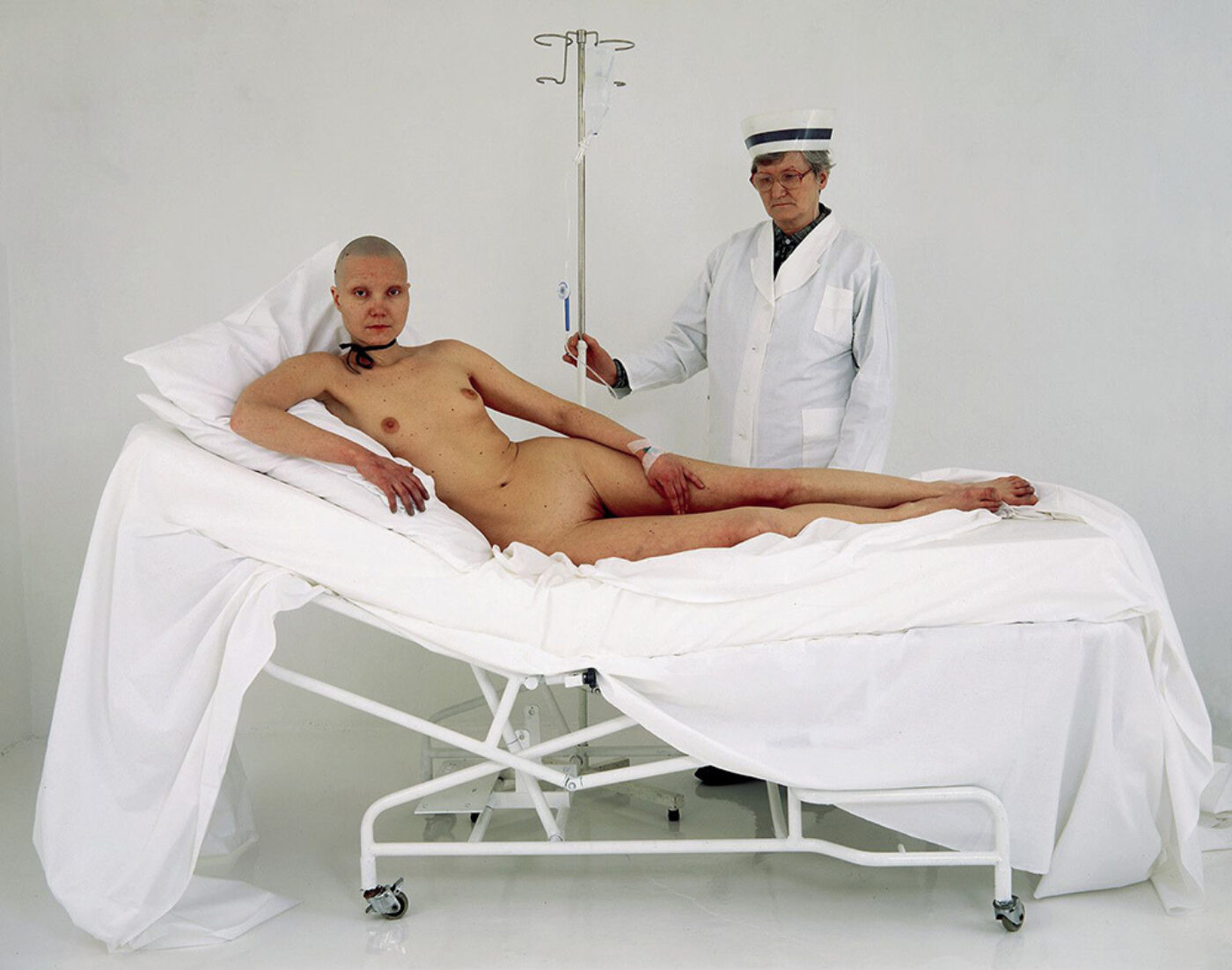 ZB How did things progress between you?

KK It fizzled out after some time. He “fixed” me.

ZB I also read that he was a critic of your art.

KK Well, you know what? With Olympia he overstepped a little and got carried away at the wrong moment. Animal Pyramid (1993) he understood, because in general he understands a lot and is a nice, giving guy. With Olympia he surprised me by saying that “I’m making fun of disease.” What fucking fun? I wasn’t making fun.

It probably had something to do with the scandal at the hospital. It blew up harder than I realized at the time. After my Olympia exhibition was shown on TV, Sister Zosia [the nurse in the picture], the one who gave me the IV, was really upset by the fact that she was suddenly on TV in a photo and in a video together with me. I don’t understand why she was so upset about it. She didn’t want to see me anymore after that. She shouted at me: “Get out of my sight!” I really didn’t understand. After all, she had always given me the IV; only now I was naked.

I don’t know what happened there, but I felt cheated by them, misunderstood. It just ended, and that’s it; but we’re still friends, the doc and I.

ZB It seems to me that you let everything into your work, life too. It’s just blended and “blurred,” as Foucault says, the doctor and even the cells. You have this series [Blood Ties (1995)] in which cabbages and cauliflowers stand in for cells, and you’re showing this micro/macro world, both a wide and a long lens at the same time. It’s somehow bursting the image open, and people are getting offended.

KKPeople see themselves in something that is not their fairy tale. Sister Zosia, with whom I even thought myself to be friends because these therapies had been ongoing for so long, felt misappropriated. Or maybe she sensed “deviations.” Maybe it interfered with her humility. But I am appropriating by doing the work. I am appropriating other people. 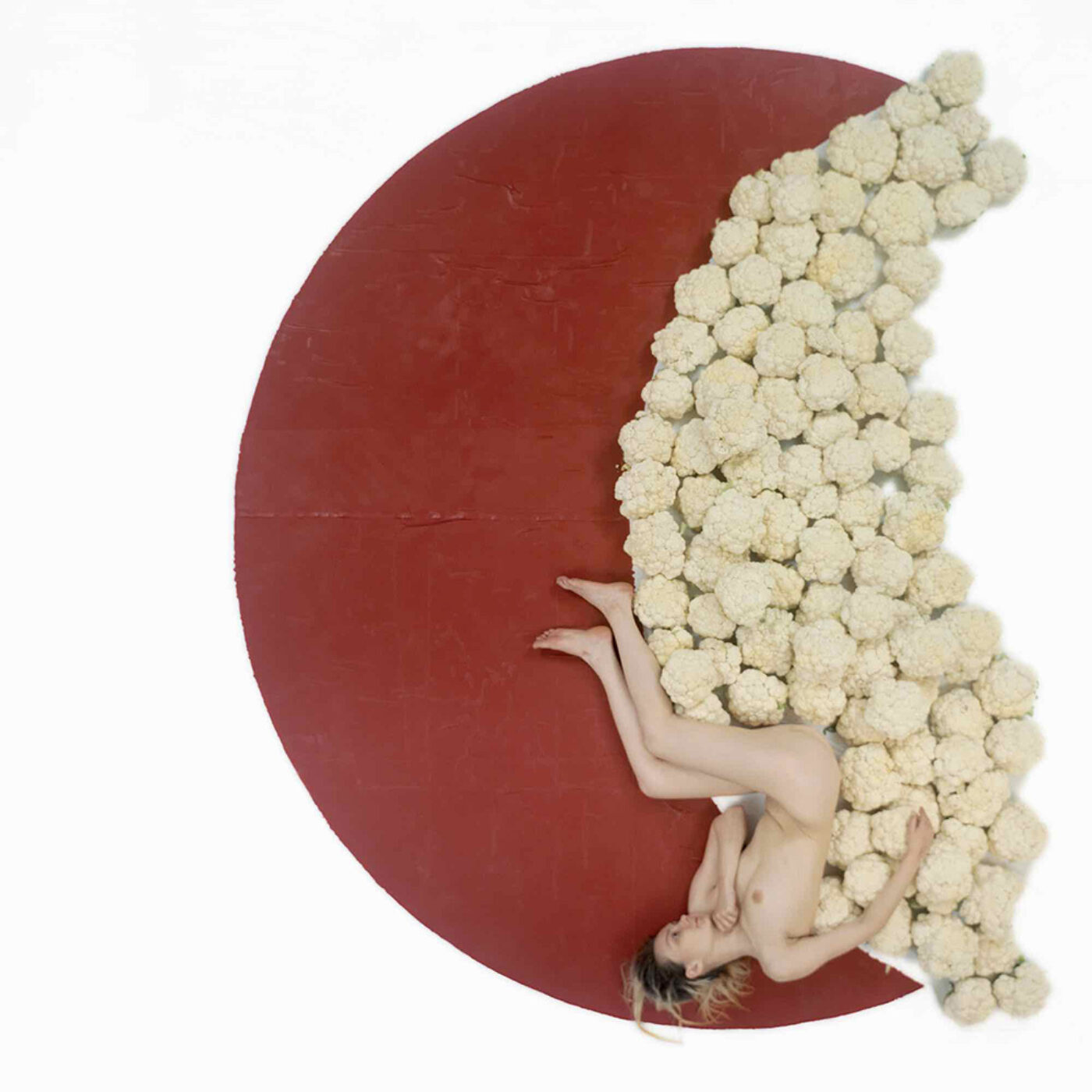 ZB I’m sorry I have to somehow relate it to myself.

KK Of course you do.

ZB I’m still mainly interested in this theme of “endless reciprocity.” Foucault talks about the medical view that reflecting this is some kind of “blur” between what you are and what you show. “The condition of its truth is the necessity that blurs its outlines.…” And I noticed that the next thing you discuss in the Casting catalogue is friendships with homosexuals. You go right from your relationship with the doctor and him being offended by Olympia, which is too much for him, to discussing your homosexual friends. It made sense to me. I saw Olympia a very long time ago; I was probably still a teenager.

ZB And I’m gay, of course. She resonates with me so much. Your work is the most “of our time,” the most powerful Olympia of them all for me.

ZB I’m not surprised that young, gay men imitate you in it. I’ve noticed that they idolize your Olympia. They take pictures of themselves naked with it.

KKIt struck a chord with them. Super. I hope the young gays won’t let her disappear.

ZB I don’t know what you think about this, but when I look at your work I also see the work of a feminist.

KK First of all, it is so damn personal. I was getting used to myself in front of other people. I had never shown my body before, only in Blood Ties and then in Olympia. It was such a breakthrough to practice letting the audience into my vulnerability zone. It’s hard.

What do I think about the fact that the guys are photographing themselves naked with Olympia? Maybe they identify with something, this vulnerability. It is interesting that this word does not really exist in Polish, this “vulnerable.” It’s this conscious exposing yourself with your defenselessness, exposure to another’s gaze.

ZB We have “kruche” and “bezbronne,” but those are really “fragile” and “defenseless.” In Latin, vulnerable” really means “openness to being wounded.”

What do you think about this kind of friendship between gay men and feminist women?

KK Perhaps women and gay men have similar sensitivities and status, relegated through the foreground to the background, or rejected outright. Maybe we just think alike? The world for women and gays is also more dangerous.

KKI don’t use Instagram or YouTube too much. I don’t believe in Instagram. Listen, Instagram’s posturing; I think it’s pretty hypocritical. Everyone just presents themselves in the best light. It’s some other reality. I don’t want all these pictures; there’s too much of it. If you have to interpret everything, it’s paranoia.

ZB Even if you don’t use it, you have to feel the world changing because of it, to some extent.

KK It’s expanding and shrinking too. Since COVID I’ve become more sensitive to others. Maybe it’s because I see less of them. I have less contact, so I sense some kind of solidarity of species. With many people, I got even closer. Maybe the point is that now we as predators are suddenly endangering ourselves, just like we endangered and annihilated other species.

ZB In a sense, because of the pandemic, we are restarting from a more common place.

KK I think we are getting closer through isolation; at least I feel that way.

ZB You just have something so primally subversive.

It tempers you. I try to look at myself from the outside maybe a little bit, and I try to overcome the shame because of the embarrassing moments I get into. So what if I expose my weaknesses? If something doesn’t work out, if I fail to live up to some expectation, I say to myself that I have to just “fuck it up.” Who cares? I’ll feel embarrassed, but others might feel the same way. And that’s really fucking empowering. You can bring these feelings up in others. It’s a kind of tool to move people or to awaken something inside them. I’m not just making images.

Katarzyna Kozyra: Świat Wzorcowy (Model World) is on view at the Institute of Industrial Design in Warsaw, Poland, until May 23.

Zbigniew Bzymek has made hundreds of videos for The Wooster Group’s video journal The Dailies. Recently, he directed a live survey socio/musical performance called Koncert Pytajników (Concert of Question Marks) at Teatrgaleria Studio in the Palace of Culture and Science in Warsaw, Poland. 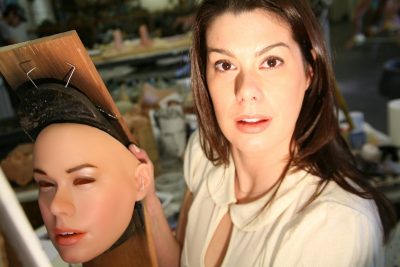