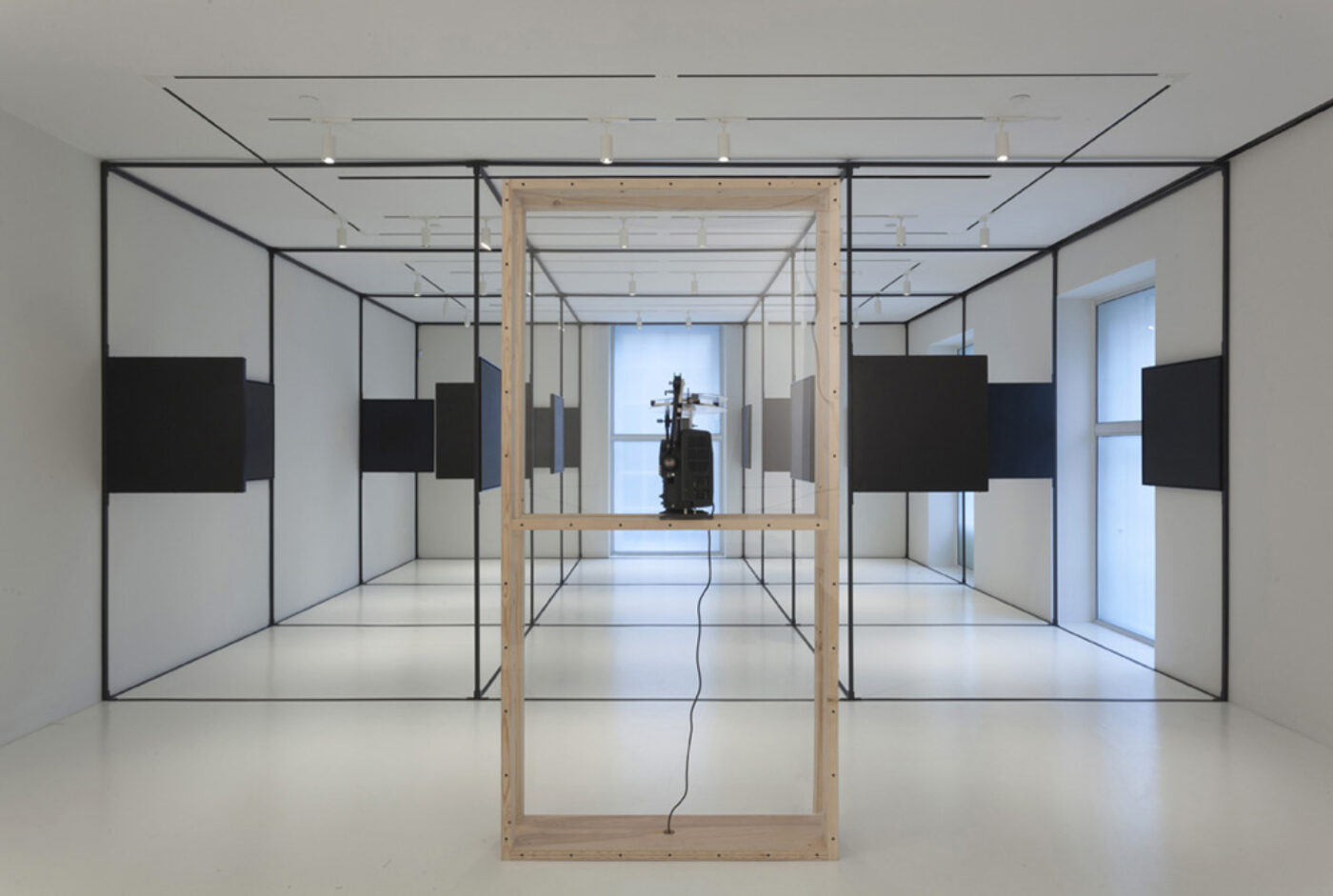 For some people, the old end-game of black painting still elicits a thrill. I am one of them. The first time I saw a slide of the Russian Suprematists’ all-black Last Futurist Exhibition of Paintings 0.10, in a modern art survey course, I was hooked. Here, I thought, was the origin of punk: Art as self-annihilation, as total confrontation, as wiping the slate clean. Of course, artists have deployed black monochromes in the service of various ideas over the years, from political withdrawal to spiritual contemplation, to signifying an evacuation of subjectivity or marginality (many of these themes were explored in Blackness in Abstraction, a group exhibition curated by Adrienne Edwards at Pace Gallery this past summer). But even the Suprematists’ politics weren’t without complication. As Russian researchers from the State Tretyakov Gallery discovered last year, Kazimir Malevich’s infamous Black Square (1915) contained a racist handwritten inscription under the dark shape: “Battle of negroes in a dark cave.” The endless rhetorical permutations of such a “simple” aesthetic gesture as an all-black painting are the stuff that keeps the wheels of art history turning.

Karin Schneider is another black monochrome obsessive, as evidenced in Situational Diagram, her first solo show at Dominique Lévy. The Brazilian-born artist has acquired a hip if underground cachet over the last 20 years as a co-founder of the film production company Union Gaucha Productions (1997–2010), the Lower East Side collective gallery Orchard (2003–2008), and the experimental downtown space CAGE. Schneider’s show of black paintings and sculptures takes its cue from the postwar abstractions of Barnett Newman, Ad Reinhardt, and Mark Rothko, though other artists’ legacies also figure prominently. The exhibition reflects her apparent interests in self-organizing and analyzing networks of information, yet her paintings operate more on the level of citation than expression. As a press text states, “Situational Diagram is an exercise that detours from a politics of aesthetics associated with prevailing modes of authorship, viewership, and dissemination. It creates opportunities for multifaceted encounters with artworks.”

So how do these opportunities arise? In one sense, through information. In addition to a standard press release, Schneider’s show offers viewers an 18-page exhibition guide, complete with an exhibition synopsis, mini-essays on individual artworks, a conceptual diagram, and a floor plan, as well as an extensive catalogue for sale. With titles resembling mathematical formulas, Schneider’s works directly point to her art-historical references. For example, V (MR/RC#1473) (Void)—a huge canvas laid on the third floor that’s coated with a mixture of oil, petroleum and coal—resembles in shape and darkness a panel from Mark Rothko’s Rothko Chapel in Houston. 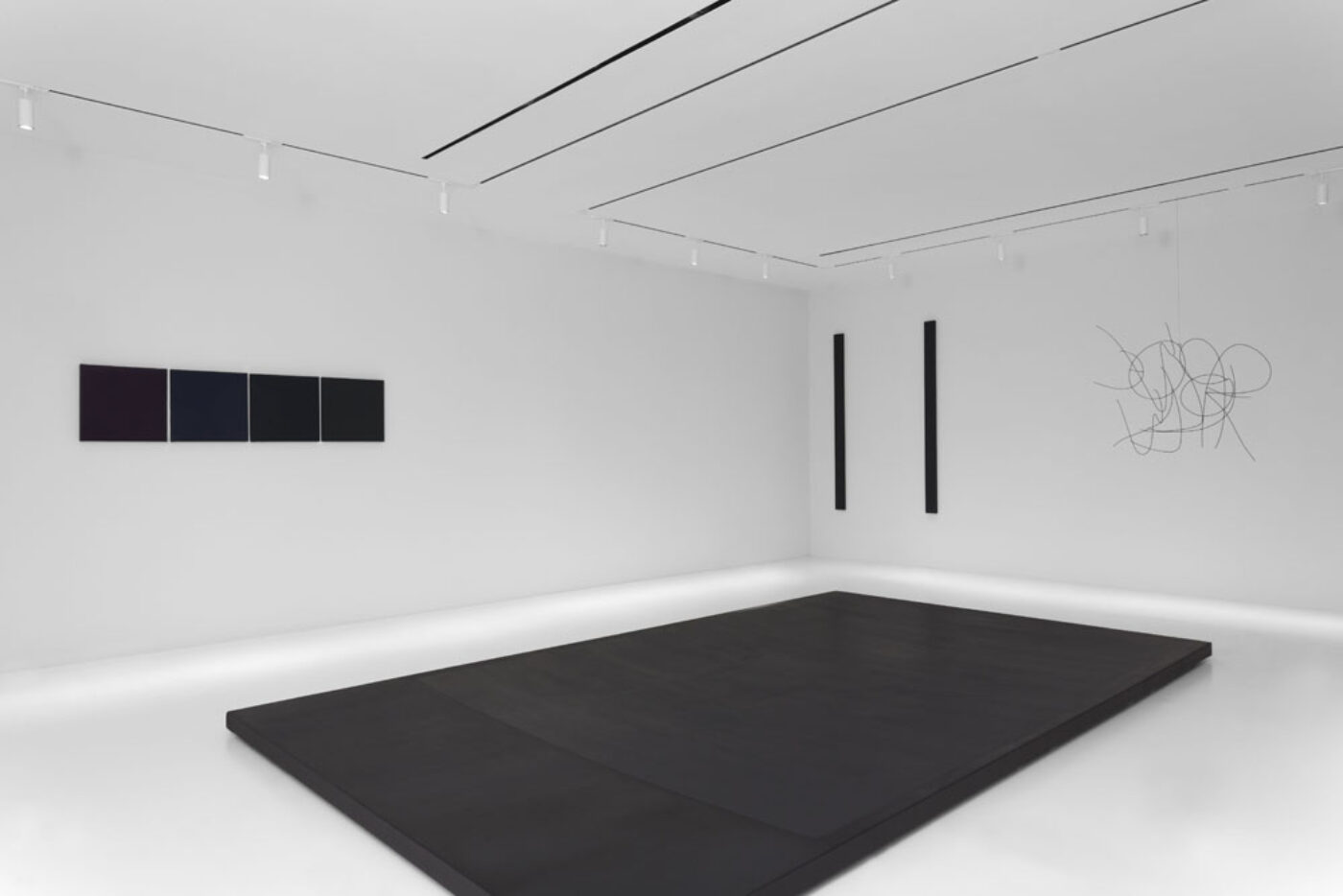 Collaboration is another facet of the exhibition, which opens on the gallery’s second floor with a one-minute black-and-white 16mm film projection of the Adriatic Sea’s horizon line, framed by a simple wall drawing. A steel-gridded apparatus occupies the other half of the floor, to which is affixed 16 black monochromes from the “Obstructional” series. Each features a 16-by-16-inch square on a 30-by-30-inch canvas. Schneider uses different combinations on each of Mars Black pigment mixed with one of four additional colors: Cobalt Blue, Cadmium Yellow, Cadmium Red, or Phthalo Emerald. Viewing these paintings requires intense perceptual focus. Under the shifting daylight, the borders of Schneider’s squares (painted with varying crispness) blur and fade, forming a poetic rhyme with the Adriatic’s horizon line on film. The “Obstructional” paintings have a conceptual twist, however. As the guide makes clear, the panels, sold separately, will be subject at a future date to an unspecified “alteration” by another (unnamed) artist. In the setting of a blue-chip gallery show, Schneider disavows her painterly gesture, and asks her potential patrons to support a future collaboration—albeit a polite one, exercised within the bounds of a petite canvas.

Another angle of the show considers historical occlusions. Both floors feature “Extraction” sculptures, placed on the ground, of figures excised from famous modernist artworks. In the neoprene sculpture E(HM/NB III-I), two figures are fused together from Henri Matisse’s “Blue Nudes” cutouts (1953). The extraction E (TA/AP) reproduces in steel the man from Brazilian artist Tarsila do Amaral’s oil painting Abaporu (1928). Do Amaral, one of the founders of Brazil’s Anthropofagia movement linking Brazil’s colonialist heritage with cultural cannibalism, is also represented by a version of her painting in an Ad Reinhardt black palette, AR(BP)+TA(AP) (Cancellation). Schneider’s consideration of Do Amaral’s work literally against Reinhardt’s is original, but in reducing both to shadows, Schneider suggests an annulment of radical possibility.

Schneider adds questions of political visibility to her inquiry, with additional canvases in homage to Rothko and Newman created from oil and coal, and black-on-black pictures sporting the country names of Poland, Syria and Serbia. A “digital extraction,” in the puzzling form of a print Artforum ad for the show, includes the link to a refugee nonprofit organization on a black page, opposite a news agency photo of a refugee, circling back to the Adriatic. 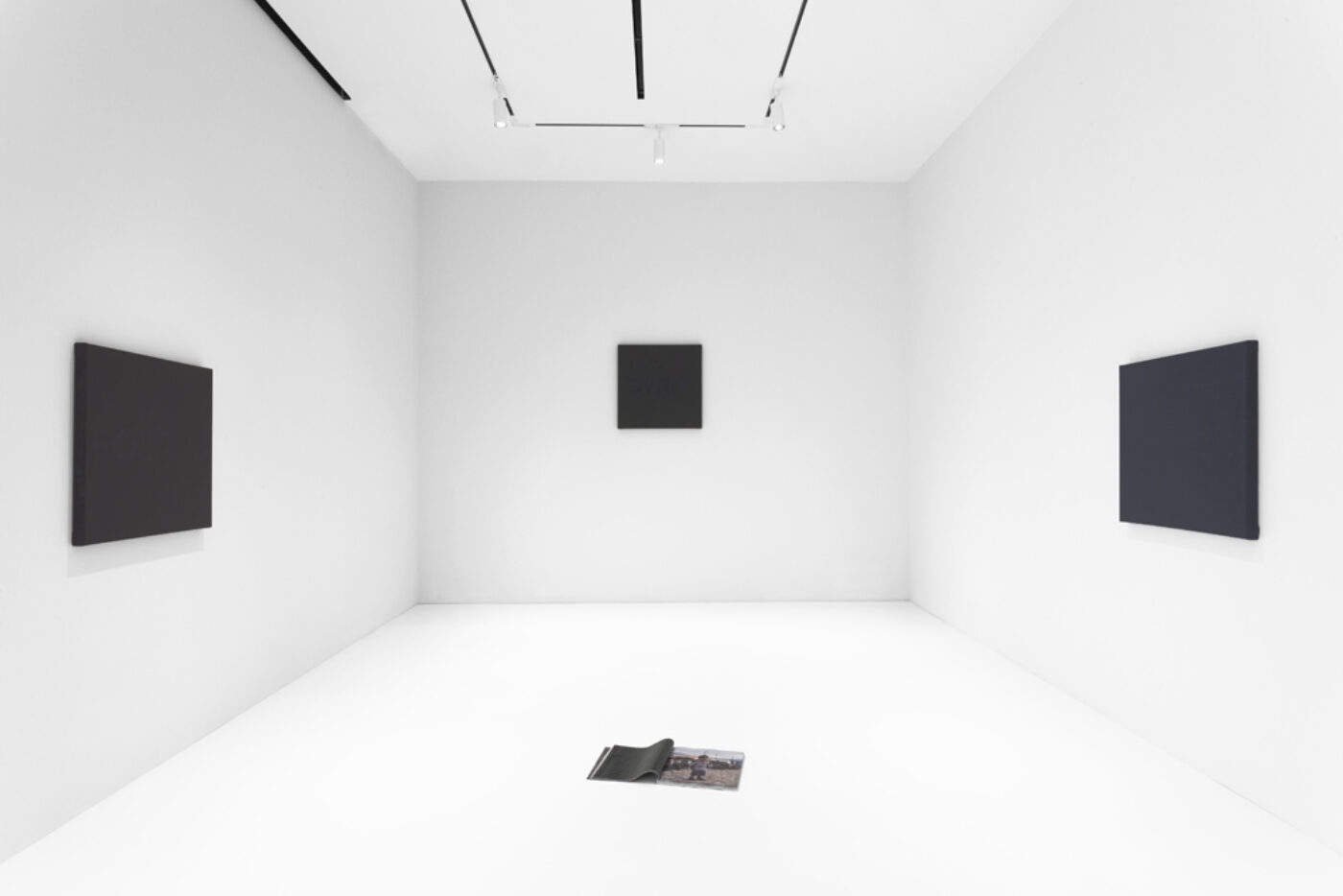 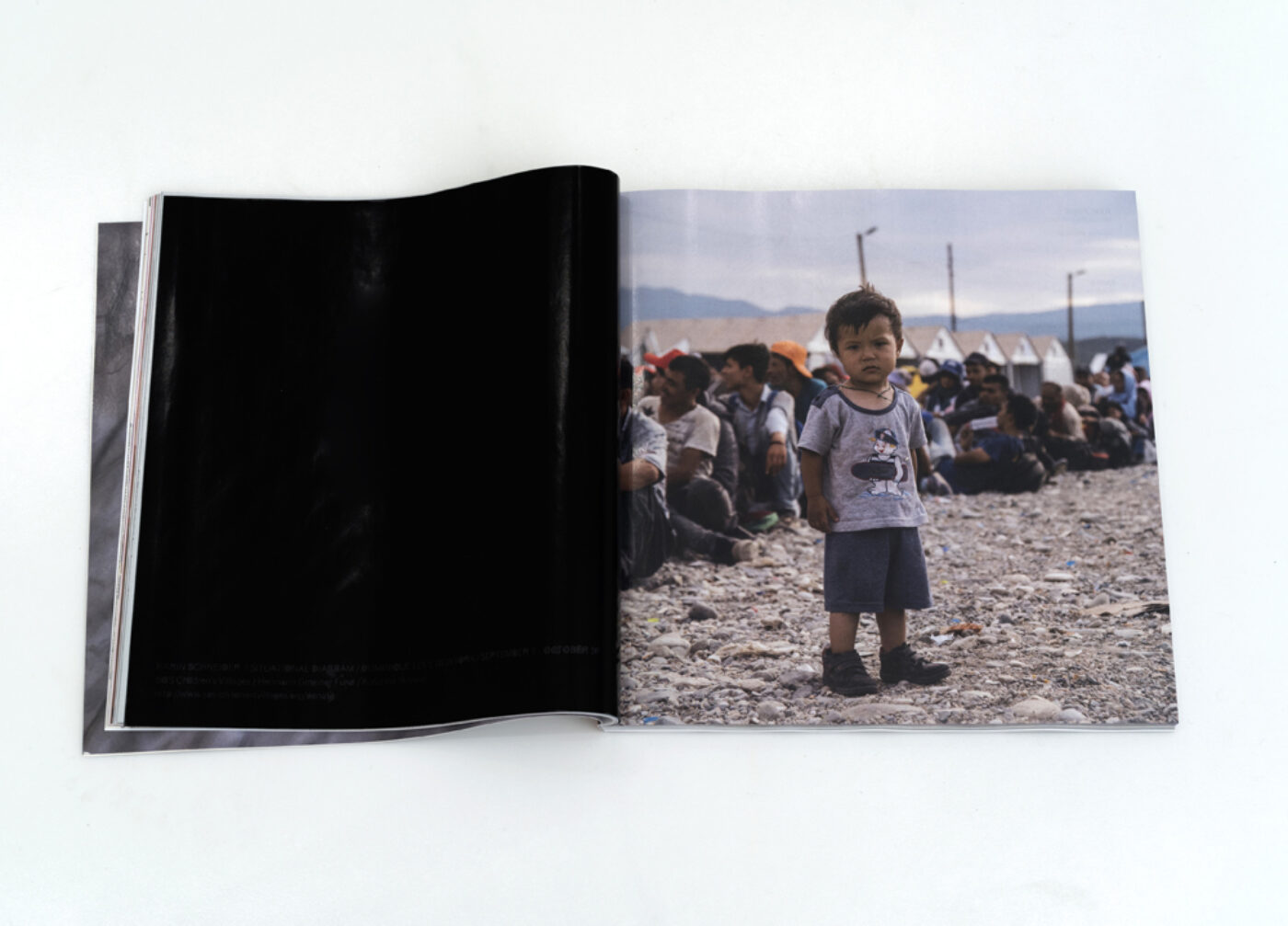 Even with (or maybe because of) its political correctness, there’s something a little too neat about Schneider’s outsider-insider status. While at the gallery, I observed Schneider herself guiding a well-known curator in tight circles around the space, a gallery director walking the space separately with a better-known critic than me, and a well-heeled couple (collectors?) whispering in the corner with another gallery representative. This rehearsed and hierarchical choreography suggested nothing of Schneider’s anti-authorship stance. Despite the work’s provocations about historical and contemporary blind spots, the creation of black paintings, in 2016, signifies nothing so much as good taste. It divides the connoisseurs from the ignorant. Ultimately, it provokes a question: Is painting today just a quotation of historically radical ideas, or can it still transmit them?

Wendy Vogel is a writer and sometimes-curator based in Brooklyn. She has contributed to Artforum.com, art-agenda, Art in America, ArtReview, BrooklynRail, frieze, The New York Times, and Rhizome, among other publications. 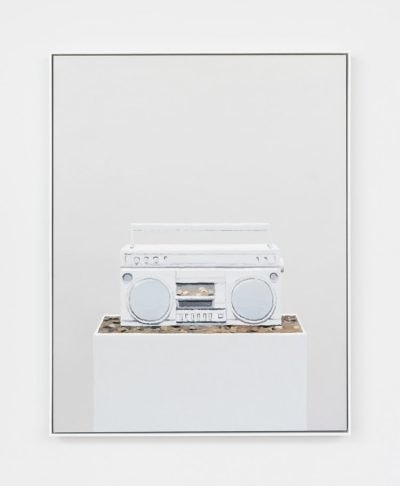 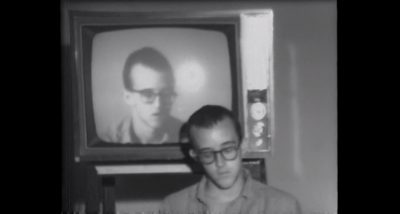