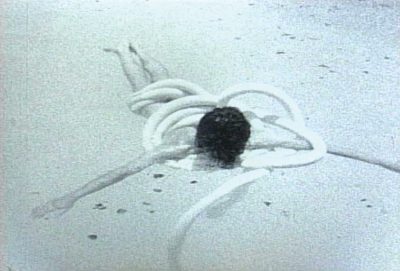 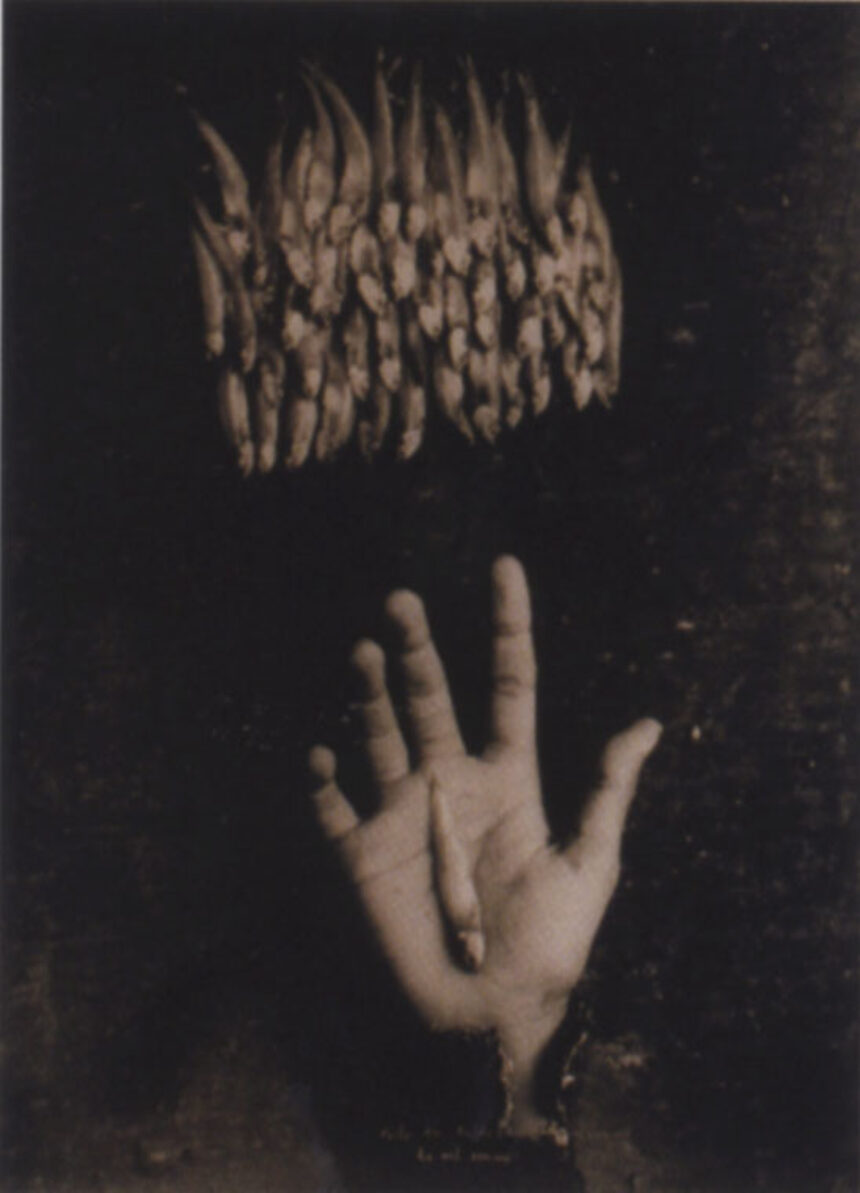 On a recent trip to Cuba I visited the studio of photographer and filmmaker Juan Carlos Alom in the small beach village of Cojimar, outside Havana. Alom had just printed a series of black-and-white photographs of the rural countryside outside the capital. The negatives had been damaged somehow, but Alom had printed from them anyway, and the ghosted prints, speckled white around the black edges, seemed detached from any physical location and impossible to date, though he’d snapped the series just earlier this year. Because of the difficulty in communicating between the island and the United States, there was no way to obtain the prints for reproduction here. Even at the moment I held them in my hand, the landscapes seemed to exist only in the photographs, confounding the Barthesian notion that a photograph is indistinguishable from its referent.

It is typical of Alom’s work that the elements presented confer an absence. The fetishized, object-based photographs in his 1996–97 series El libro oscuro (The dark book) are set in theatrical scenes. The surreal tableaux—delicate birds’ wings nailed to old wood; shiny fish hovering above an outstretched hand—feature symbols of captivity and mortality. Wired together, scratched with words or scraped with nails, these staged metaphorical objects place the responsibility for determining meaning on the viewer and effectively obfuscate an analysis that might be officially deemed problematic. Critic and curator Gerardo Mosquera calls this the “You Know Who” syndrome. “This phrase is used in Cuba to criticize the ‘Maximum Leader’ without mentioning his name,” Mosquera writes. “In the end both [artist and viewer] know what the work refers to, but both are protected in an unusual alliance between censor and censored.” 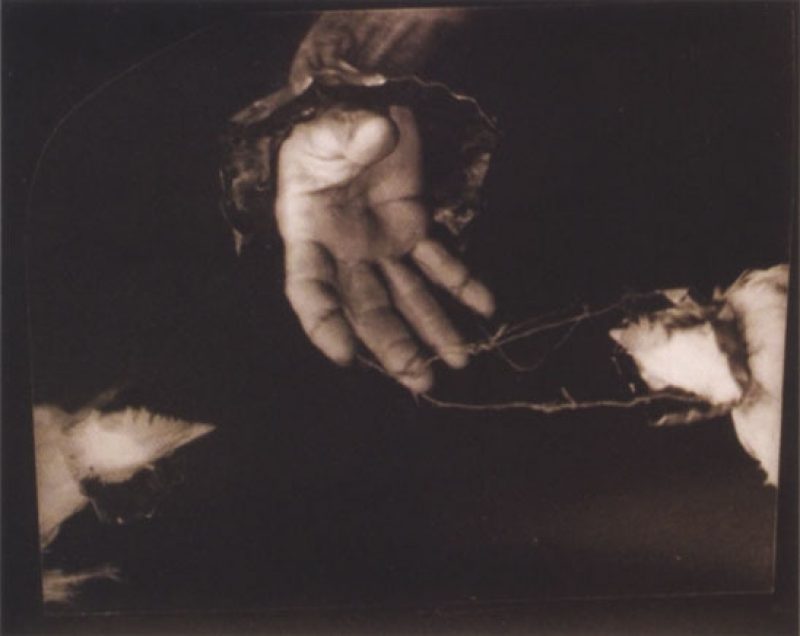 Alom was trained in photography at the Institute of International Journalism in Havana in the late ’80s, a period when the generation of artists ahead of him were struggling to make their presence felt in an atmosphere of increasing government pressure to curtail artistic expression. In a movement that began with the visual arts and spread throughout Cuban culture, a marked separation developed between official and cultural discourse for the first time since the revolution in 1959. A distance was established, and its critical edge was reaching the limits of official tolerance when the Berlin Wall fell, the Soviet bloc collapsed and the United States’s economic embargo tightened, creating a crisis that became known as the Special Period. The social strata cleaved along green lines, but even those with high salaries had to come up with alternative methods of acquiring dollars to survive—from systematized black market enterprises to stealing and prostitution—though the main source of income to Cubans remains family members living in exile. This has created a double economy and a double system of morals that affects all aspects of life on the island. 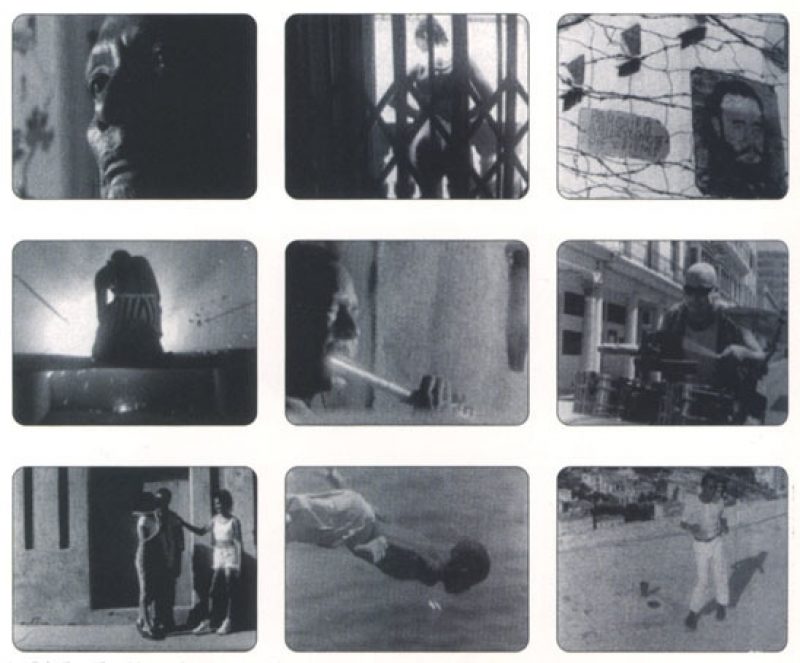 Before my trip, I had seen Alom’s film Habana Solo (2000), a powerful short for which the artist asked street musicians all around Cuba’s capital to offer him a solo: whatever they were hearing in their heads at that moment. He then stitched the footage to unpopulated street shots from around the city, focusing first on isolated shadows, then on the objects that cast them. The film’s score advances in a progression incongruous with but orchestrated in relation to the film’s visuals—the sound aligns with the imagery, then shifts to sound track and back again. The film brings to mind Yugoslavian filmmaker Emir Kusturica’s 1996 filmUnderground, whose title refers to the location where, on the eve of Tito’s rise to power, half the characters in the film are living in the mistaken belief that they are political prisoners. By having a gypsy band follow around the main characters, scoring the film from inside, Kusturica absorbs the sound track into the film’s parallel realities, thereby elaborating an airtight interior logic and suspension of disbelief to the otherwise absurd storyline. It’s Habana Solo’s feat, on the other hand, to remain self-contained while loosening its referents from the tautological. In the last scene of Alom’s film, the sound cuts out for the first time and a man is shown tap dancing on a roof in the middle of the day. His feet would clearly be making a sound, and one becomes acutely aware of the scene’s silence. Alom shoots it from above, the dancer’s shadow affixed to his feet where they meet the rooftop.

Lucy Raven is an artist and associate editor of BOMB. 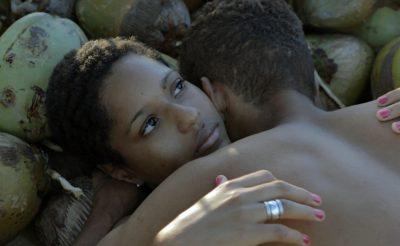