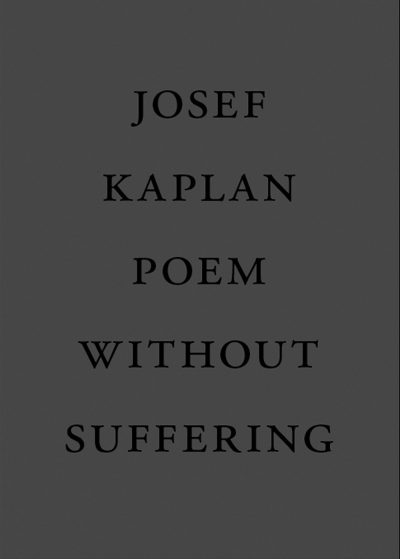 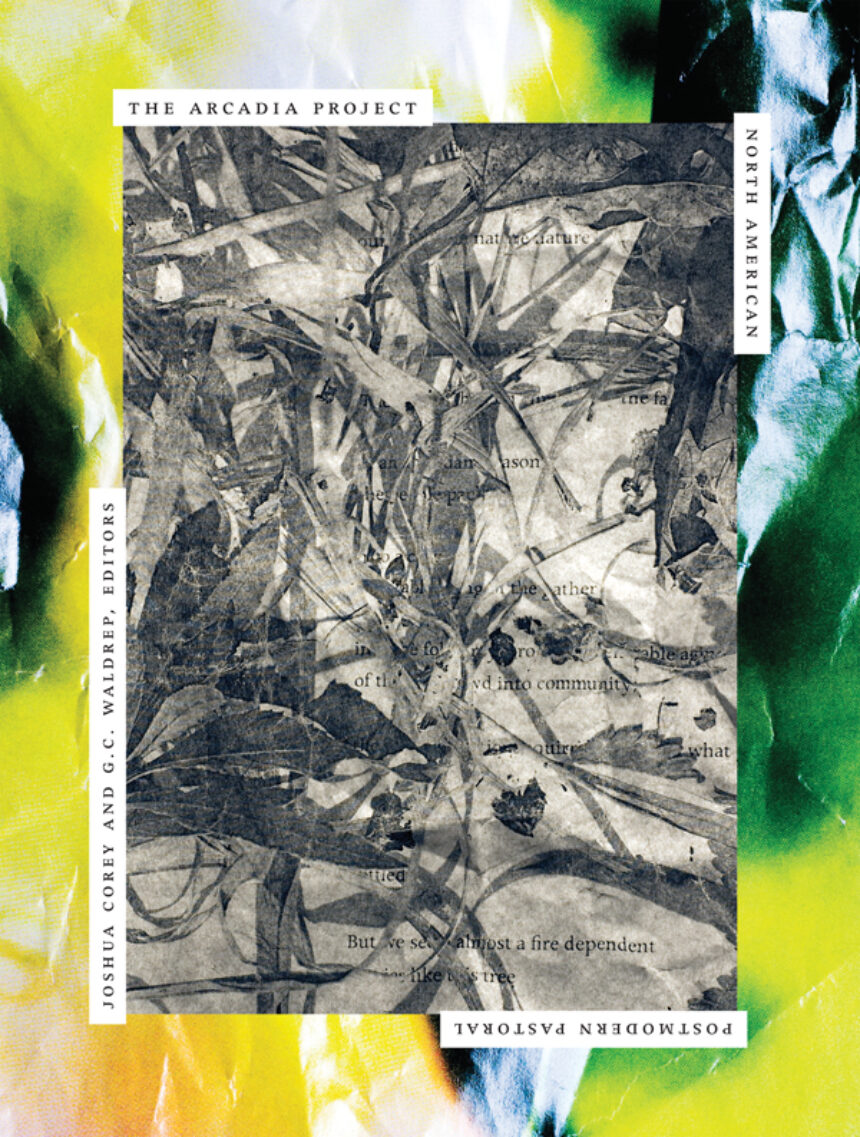 Here is an attractively printed 500-plus-page anthology of “North American Postmodern Pastoral Poetry,” culled from work first published since 1995 and divided into four largely arbitrary piles: “New Trans-cendentalisms,” “Textual Ecologies,” “Local Powers,” and “Necro/Pastoral.” Perhaps the anthology’s title, The Arcadia Project, indicates that the editors have not only Walter Benjamin’s Arcades Project heft in mind, but also its dehierarchized organization of an archive. Juliana Spahr’s “Gentle Now, Don’t Add to Heartache” is classed as “Necro/Pastoral” when its liturgical accumulation of local species names could have just as easily placed it in “Local Powers,” and Brenda Hillman’s California-centric “Cascadia” is similarly displaced into “New Transcendentalisms.” Rob Fitterman’s “LULU” and “Zoomburb” surface in “Necro/Pastoral” when they could have been shelved in “Textual Ecologies” just as convincingly, being visual poetry recyclings of found brand language.

If the county lines inside Arcadia seem a little blurry here, its external edges are just as sludgy, with poems included whose affiliation to pastoral begins and ends with an invocation of nature and an amnesia about just how patently artificial pastoral really was. The editors may mean to imply that the reality of global warming and other ecological damage must be reflected in the way we imagine Arcadia: the anthology at hand implicitly argues that, as “nature” becomes recognizably historical, all poems that invoke it past 1995 may be recognized as affiliated to a now-junked historical genre, that is, pastoral: a generic dilation tied to ecology’s shift into ideology. This is an argument reflected by an anthology that constitutes itself as broad and historical rather than really topical—a periodical anthology recycling an ocean of recent postconsumer poems. We may no longer want a “pastoral” to remain true to its Elizabethan (or earlier) conventions, but work that throws away its defining spirit of “putting the complex into the simple,” as Empson said, at the same time as it tosses pastoral’s suspiciously orotund swains, misses out on the genre’s capacity for an inherently ironic political commentary. While some of the poems here—Cathy Wagner, Lisa Robertson—speak with a pastoral wit as acerbic as leached battery acid, pastoral’s potential is often replaced with the preciosity of nature writing or deadeningly earnest efforts to put the direct into the direct in order to speak “truth”(ideology) to “power” (consumers of “North American Postmodern Pastoral Poetry”).

Now that we’re all panpastoral citizens, as pastoral expands to include all of nature, what does it mean that the genre also erases internal articulations, or replicates them as vacuous branding? Benjamin’s arcades, as the mall’s ancestors, were architecture made from the desire for junk space. The internal disarticulation of pastoral might respond to a desire for generic junk space: Arcadia as the Great Mall of Literature. Pastoral Arcadia was already ideological, but in a negative relation to an ideological exterior: a place you went to, or were sent to against your will, in order to snipe out of both sides of your panpipe. Before it lost its exterior by being conflated with a universalizing and pious “nature,” Arcadia was a delimited place from which to launch ideological critiques—now it is an interminable place in which to consume universal ideologies: a Möbius strip mall. You might as well don a shepherd’s cloak as take quinine before a visit to the Rainforest Café.

Maybe we are not meant to take the anthology’s genre distension earnestly; maybe we are meant to take it pastorally—to take it and leave it. Meanwhile the Angel of History just can’t keep his desktop clean. “Nature is a big series of unimaginable catastrophes,” a really hostile environment, so “we should become more artificial,” notes Žižek. If Beckett’s Happy Days had a third act, we’d be treated to the really pathetic sight of a hill that just won’t shut up.

A RESPONSE FROM THE ARCADIA PROJECT’S COEDITOR

The Arcadia assembled by our anthology is indeed meant to serve, following its Benjaminian model, as a kind of dehierarchized archive of the present. Contending versions of pastoral are mobilized into relations with each other intended to be thought provoking, if not dialectical in the strictest sense. Many of the poets in the anthology are appropriately skeptical toward, and yet engaged by, the pastoral fantasy. The subject—split by language, himself a fantasy—confronts an other that itself does not exist, is not truly Nature, is not truly Other. This is the major distinction between pastoral and “nature poetry.” The latter is preoccupied with policing the boundary between humans and nonhumans, tending to veer to one side or the other: anthropocentrism or misanthropy. Pastoral, on the other hand, is explicitly fantastic if not phantasmic: it has everything to do with our vision of the Animal, or History, or Death, from which we hide for a while, sheltered in the arms of the Big Other, playing a little tune. And this is why most of the works in the anthology present deliberately unstable versions of pastoral that could be termed anti- or post- or urban: their landscapes are really hyperscapes that trouble the distinction between self and nature, figure and ground.

Many of the poets in the anthology still seek against all odds to tune “Emerson antennae” to a viable vision of a transcendental yet earthly commons. Their green hope is a sincere one. But this does not signify naïveté about the ideological uses to which ecology is put. Žižek’s criticism of ecology as the new opiate of the masses misses the possibility that ecology need not manifest as a fascist discourse intended to short-circuit the political or preserve a false idea of a safety net beyond human decision. Rather, ecology has become the ground for what Alain Badiou calls the “truth procedures” that condition philosophy. It no longer speaks to a kumbaya sort of holism but presents a potential site of rupture, from which unclassifiable Events that cannot be accounted for by any existing discourse of control may emerge and be given collective, deeply political names: Katrina, Deepwater Horizon, “Drill baby drill,” Sandy. These events, which only become Events in the Badiouan sense if we pledge our fidelity to the terrifying truth they reveal (there is no limit, there is no boundary), have the capacity to re-create us, readers and thinkers, as new subjects. As Paul Celan put it in his poem “Threadsuns”(translated by John Felstiner):

A tree-
high thought
grasps the light-tone; there are
still songs to sing beyond
mankind.

Ecology in this sense is more than a discourse; it can ground any or all of the four Badiouan truth procedures that can give rise to the Event: art, politics, science, and love. Pastoral, as a manifestly ideological, artificial, and historical version of ecological discourse, is ideally suited to suture that fourfold domain to which the anthology’s four sections very roughly correspond. Art and aesthetic strategy form the major preoccupation for the poems of “Textual Ecologies”; the work in “Local Powers” combines pastoral with scientific empiricism; the “New Transcendentalists” explore the implications of radical commitment to the beloved (bird, bee, flower); and the poets of the “Necro/Pastoral” concern themselves with the vertiginous experience of the collective, the undead line between us and other. Reading the anthology will not, we trust, produce as schematic an experience as this seems to describe: the fourfold sectioning is intended only as an initial point of orientation for readers seeking, in the heightened and urgent sense of what we might term evental ecology, or postmodern pastoral, to get the news from poems.

Jeff Nagy is the author of poems and essays in Hi Zero, LVNG, Petri Press, Drunken Boat, Artforum, and The Claudius App, which he coedits.

Joshua Corey coedited The Arcadia Project with G. C. Waldrep and is the author, most recently, of Severance Songs. 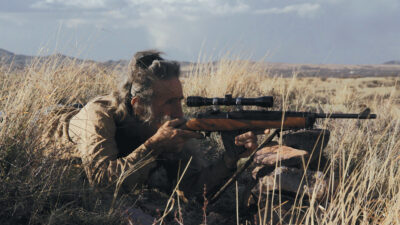 On occasion of Sniadecki’s current project, A Shape of Things to Come, the two filmmakers trade insights on “sensorial cinema” and working with reclusive desert-dwelling subjects.