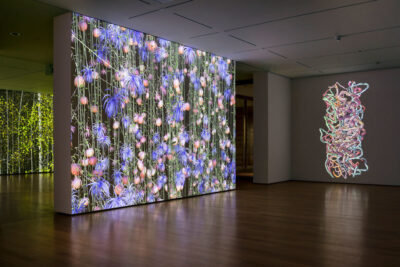 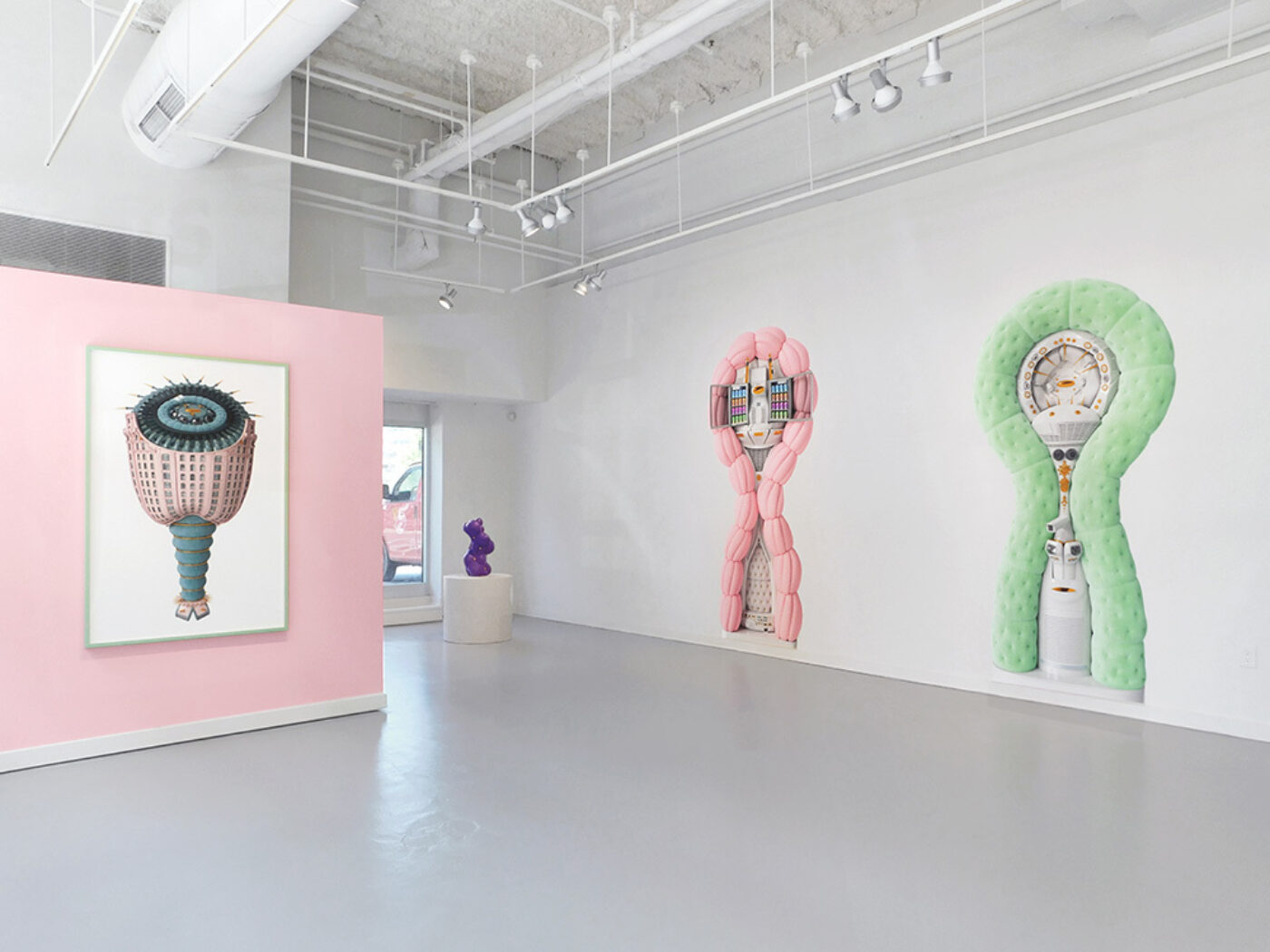 My first exposure to the work of Jonathan Monaghan came not through one of his exhibitions, but by clicking on a link to his online animation portfolio. I was immediately intrigued by his chimeric juxtapositions of video game aesthetics, cyber-surrealism, and humorous (but sharp) cultural commentary. During a recent trip to Maryland, where Jonathan lives and teaches, I had a chance to sit down with him for a conversation about his new work and the prevalent themes that he explores across video, sculpture, print, and installation.

Sean CaponeJonathan, can you tell me a little about your residency and exhibition at the VisArts Center in Maryland?

Jonathan MonaghanThe VisArts Studio Fellowship gave me the opportunity to create a new body of work over a six-month period. The show is called A Trace Left by the Future and uses sculpture, prints, and wallpaper installation to juxtapose imagery of soft fabrics with ambiguous electronic devices and surveillance cameras. Like much of my work, it explores my anxieties about an increasingly technological future.

SCThe last show of yours that I saw back in 2018 at the Walters Art Museum was based on the Fabergé eggs from imperial-era Russia.

JMAfter Fabergé was a series of prints I made in 2015. They are absurd reimaginings of the Fabergé egg, which for me is a symbol of wealth, desire, and power. I replaced the gold and jewels with USB ports, satellite dishes, or bits of anatomy. They became ambiguous, surreal objects, so you’re not quite sure what they are: a commercial product, a spaceship, or something from the future? I was drawn to the Fabergé more for its pop-cultural symbolism—as a way of thinking about modern materialism and consumerism. 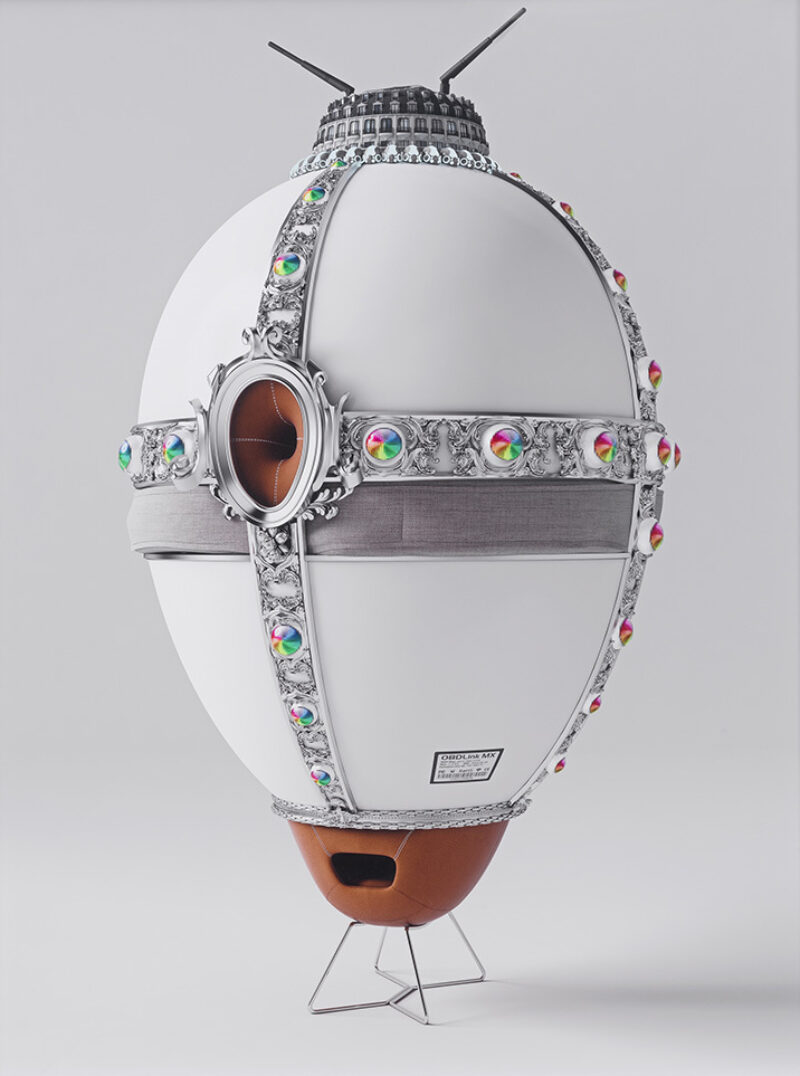 SC You just got back from Russia where you were part of a group show at the Hermitage in St. Petersburg, also home of the Fabergé Museum.

JM The Hermitage is quite over the top to say the least. We could look at a monumental undertaking like the Hermitage, think of the labor and resources—the decadence, the ostentation—and be a little repulsed by it. The same can be said of social media or consumerist culture; those qualities are still there. I try to draw out these parallels in my work.

SC I’ve followed you for several years, but I’ve never seen anything from before you started doing 3-D animation and arrived at this style. What led you to using animation as your art form right from the start?

JM I’m self-taught in animation. As a teen, I didn’t have much of a social life, and I downloaded some 3-D software. What led me there was video game design; I wanted to make environments for games. After that I started taking on the industry-standard 3-D packages, but I was just doing it for fun, teaching myself. I was drawn to the idea of creating an image that could be mistaken for a photograph. So I went to college for computer graphics, but the program was pretty vocational. At some point I decided I could use my skills to say something more challenging, because the stuff I was making was a lot weirder than what Pixar or whatever might like to see.

SC I would love to see Pixar’s discard pile of weird-ass demo reels.

JM When I was in college, back in 2006 or 2007, I started making animations specifically to show in gallery or museum spaces, rather than in a cinematic or commercial context. It was meant to be experienced as a physical installation. Some of the first animations I did were on black backgrounds. I would set them up as projections and mask out the edges, so you would just have a ghost-like, animated form hovering in space. I was interested in animation as a kind of art object. That was the first work I was successful with as an artist. 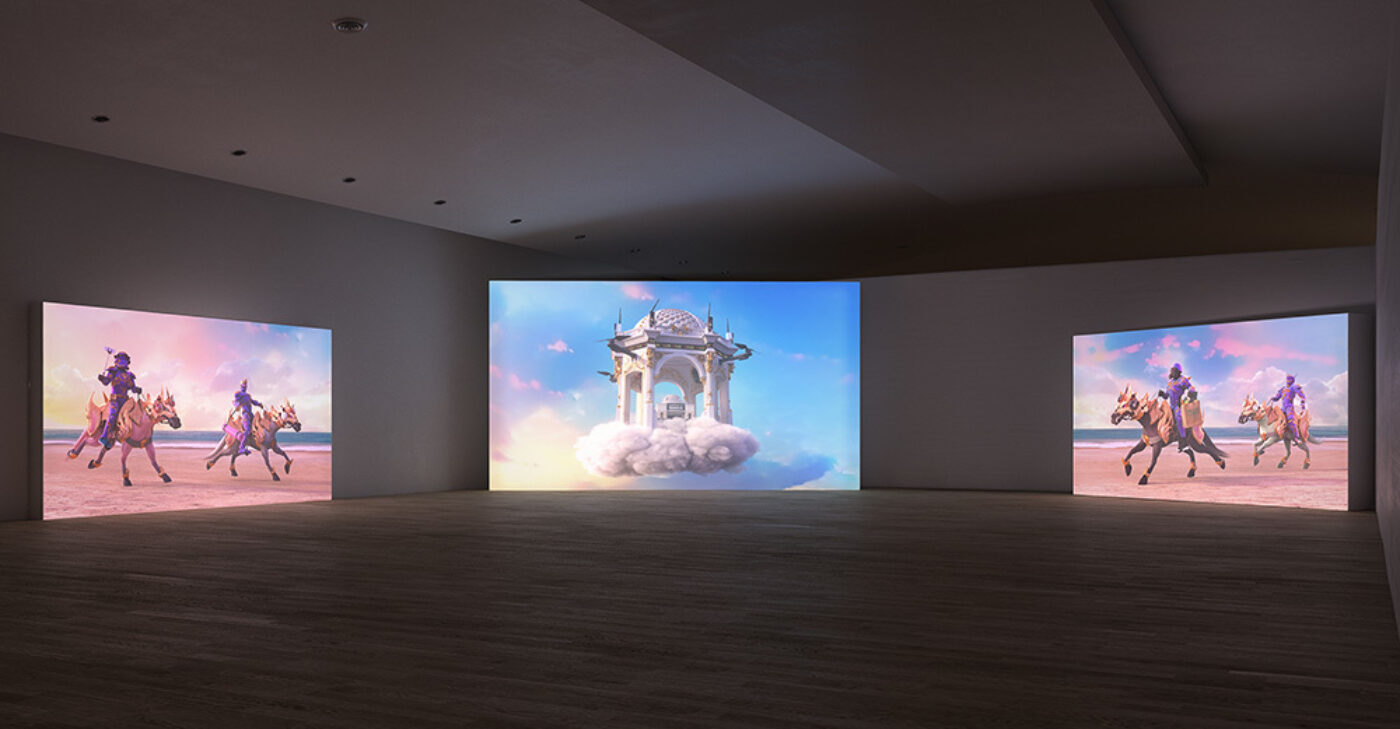 SCI’d like to break down the prevalent motifs in your work. There’s almost always a fantastic animal of some kind; there’s architecture: corporate/luxury spaces and futuristic/baroque environments that are contorted somehow; and finally, lots of rainbows—rainbows everywhere.

JMYeah! Regarding the animals—with all my work I’m trying to create a contemporary form of mythology while referencing historical mythology. Escape Pod (2015) looked at hunting mythology surrounding the deer; Disco Beast (2016) looked at the unicorn. These new myths are a way for me to personify or manifest some of the fears we have about technology and the future.

SCAnthropomorphic animals are part of the DNA of animation.

JM Yes. It’s also a way to poke fun at the commercial aspects of the medium. I think it’s important for any artist to understand the medium they’re working with in a meta sense. With anthropomorphism, I’m trying to show how technology is its own life-form. There’s a lot of birthing and dying, being rebirthed. What is the future holding for us? What is human nature in the digital age? That’s the challenge.

JMA lot of the buildings I reference are historical, related to wealth and power. My series Gotham (2016) is based on the facades of some of the first high-rise luxury apartment buildings to be constructed in New York. They had beautiful, grandiose ornamental facades, which I recreated on the computer and turned into a type of skin, creating a surreal image of architecture floating like fabric, or breathing. In my other films, they’re the houses of former Wall Street banking titans.

JMA lot of it is the “spinning wheel of death” that shows up on Mac computers when the system freezes. (laughter) But for me the rainbow is a symbol of the otherworldly; it has a psychedelic or transitional quality. Many mythologies use the rainbow as a passage to another world—the pot o’ gold, the Rainbow Bridge. The Rainbow Road course from Mario Kart is the reason I use this motif a lot. It’s a bridge between this dreamlike fantasy space and things pulled from our reality. A portal. 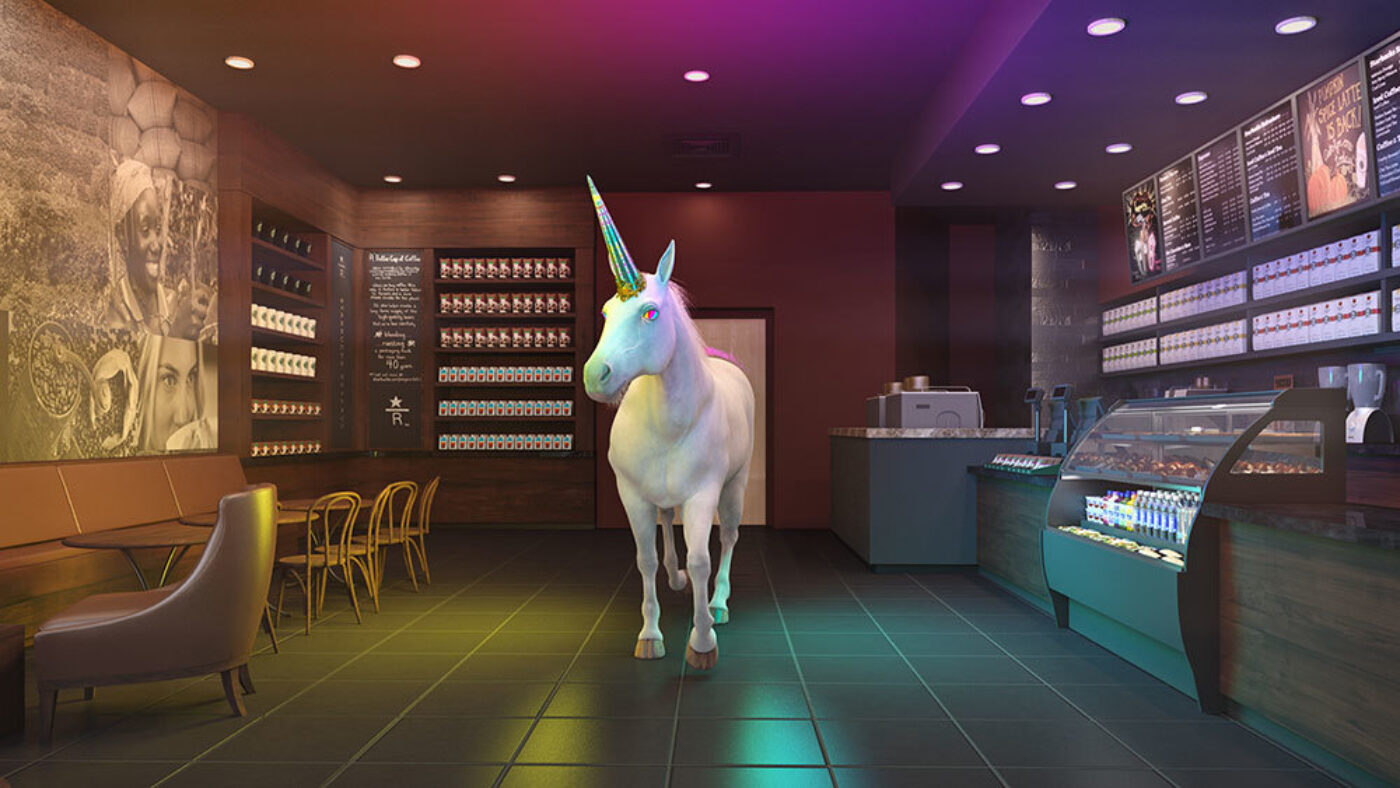 SCYou compose vast single takes that zoom in and out across shifting scales and distances. What is it about the seamlessness of digital cinematography that appeals to you?

JMMy most recent work has no edits or cuts, no beginning or end. They’re seamless loops. Even the earlier works we talked about—those ghostly projections of half-synthetic life-forms—were loops. Even though there were some edits, the pieces were conceived as objects, not films—a moment of another world that’s going to continue in an endless cycle. For example, in my film French Penguin (2009) a penguin embedded in gothic architecture eats its young and births out another in a repeating cycle, continuously propagating itself. I like working in this way. It creates a kind of processional motion where the virtual camera is almost not there.

SCIs that because you’re thinking of these as installations?

JMI think of the films as somewhere between cinema and video games. In a game, there are no cuts: you’re exploring the environment. As the viewer of my work, you’re exploring in “God mode” as you would in a video game, perceiving this virtual space and constructing this different narrative structure. Studying film history, I was less drawn to dialogue and actors and more to films that showed an environment where the camera almost disappears and you’d become part of the space in the film.

SC The environments and objects in your work seem to signify a space of extreme consumerism and artifice, but also science fiction. It brings to mind classic sci-fi films like Metropolis and Logan’s Run—artificial, class-divided societies centered on pleasure and spectacle.

JM A lot of dystopian science fiction mines fears we have about society collapsing or regressing back to nature—nature taking over civilization. My fear has always been the opposite: technology and our hyper-capitalist civilization work too well and consumerism takes over. If technology and hyper-capitalist society succeed, that to me is a more dystopian future than it failing.

Jonathan Monaghan, excerpt from Out of the Abyss, 2018. Courtesy of bitforms gallery, New York City.

JMThere are no humans in any of my animations. The worlds I create are dehumanized. They’re empty. They’re antiseptic, clinical. They don’t have warmth. In Marc Augé’s Non-Places: Introduction to an Anthropology of Supermodernity, he talks about modern capitalist spaces like airports, Starbucks, whatever that are uniform anywhere you go in the world, places that lack a sense of place—non-places. This affects your perception of reality and lowers your ability to critically receive the world around you. By creating this kind of fantasy in my work, I’m thinking through how our contemporary desires are manifested in these aesthetics of luxury and wealth.

SCYour work has a high level of detail and verisimilitude. You could easily choose a rougher or more expressionistic way of rendering the animations. Do you ever get the temptation to rough it up or mess with viewers once you’ve drawn them in?

JMWhen I decided to use 3-D animation, I wanted to do something that could only be done in 3-D. I want the films to be seamless and very seductive. That’s important to me, because it’s what technology does; it’s what commercials do. I’m trying to operate in complicity with the commercial aspects of this medium. I want the viewer to be drawn into these worlds. I think one never-ending shot does that, along with a high attention to detail and perfect surfaces. The question is: What’s behind the commercialism? What’s behind our desires? What part of human nature is manifesting itself in these non-spaces?

SCThere are no “articulate glitches,” no hand-drawn animations, no signs of your hand in the work.

JMIt’s meant to be a … polished mirror.

Jonathan Monaghan: A Trace Left by the Future is on view at the Gibbs Street Gallery at the VisArts Center in Rockville, MD, until August 11.