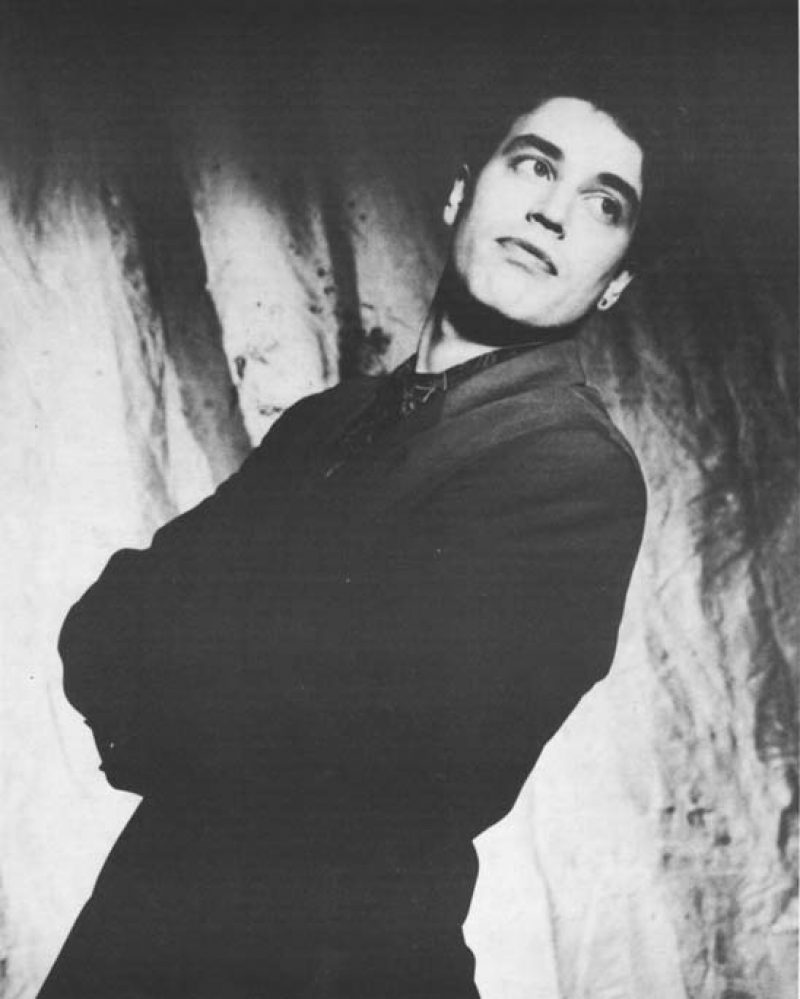 John Wesley Harding, interviewee, and Andy Craft, interviewer, both come from artistic families, have a sibling who performs with the ballet, grew up in the same part of London, lived in Cambridge [Andy as (townie), John (gownie)] and have the same haircut. John or “Wes” as he likes to be called, has a new album, The Name Above the Title , [Sire Records] his second; Andy just wishes he could get a record deal.

John Wesley Harding Somebody asked me a good question the other day, “Do you have any secret fears that nobody else knows about?” I thought it was a really good question, actually.

Andy Craft So what did you tell him?

JWH Well, I’ve got a pulled muscle from doing bar chords and I’m frightened my hand is going to freeze up on stage.

JWH So tell me, are you English?

AC Yeah. I grew up in Shepherds Bush and came here three years ago.

AC Yes. There’s something about living in England that makes you feel like it’s not okay to be who you want to be. I call it the “No, you can’t have another towel for the hotel room syndrome,” and it manifests itself in every part of English life.

JWH Yes, you’re right. Anyway, do you know my music?

AC Yes, I listened to your last album yesterday and there was something I noticed, which was your songs have a lot of words and there’s no lyric sheet, but there is a lot of information in the sleeve notes. Are you purposely trying to tell us something more about yourself?

JWH Well, people usually take the attitude of the music and transpose that attitude into the sleeve notes so you’re reading exactly what you heard anyway. But I’m not like that, there isn’t a particular image to what I’m doing. The nearest would be folk, I suppose. But I’m clearly not folk because it’s a pop album. Those sleeve notes are honestly me. Not that I think being honest is a particularly good thing, but everybody else does because they’re all fighting “sincerity” warfare.

AC Your album didn’t strike me as being what record companies would call “commercial.” It seems they took a risk with you. Who took that risk and why do you think they took it?

JWH I played Seymour [Stein, Sire Records] three songs in his office and he said, “Okay, you’ve got it. You’re signed.”

AC I suppose they get it or they don’t, eh? Have you had any grief from the label?

JWH No, nobody fucks me about.

JWH Well, I do everything. I do the videos, the album sleeves, and I write all the songs. I decide what I’m going to do on which day. And they just let me do it because I don’t spend a lot of money. If my album cost a million, I’d be in trouble, because they’d be going, “All right, how are going to make this million back?” And somebody says, “I know, we’ll make him look like Chris Isaak for the next three videos.” But that doesn’t happen with me, because my albums don’t cost very much. In fact, they make money.

AC Tell me, how old are you?

AC Because the words of your songs suggest considerable experience of the human condition.

JWH Well, that’s nice of you to say.

AC That song that goes, “Why do you do what you do when the things that you do hurt the person you are,” nobody ever told me that.

JWH I know, that’s why you take so many drugs.

AC How do you know what drugs I do! I don’t take any drugs!

AC I know, anyway, it seems to be about why people take drugs.

AC What are you talking about?

AC So what kind of conflict are your words born out of? Because it must have been born out of some conflict or at least observation.

JWH Well, it is. My whole career’s a conflict. Because what I want to do is write great words. But the other thing I want to do is to make good pop songs. In fact, I have a bigger urge to make good pop songs than I do to write great words. I listen to all kinds of shit that people don’t listen to nowadays like The Carpenters, Lovin’ Spoonful, and the Kinks and Creedence Clearwater Revival. They’re my favorite bands. But unfortunately, if “Summer in the City” came out today it wouldn’t get into the charts. And that’s a tragic state of affairs. But that’s the world I’m making pop music for. So there’s a huge conflict in my career because I’m making these pop songs, but they’re not what’s called pop songs anymore. So, yeah, it is out of conflict, conflict in the mind, I mean just from having read certain things. I mean, I’ve had a pretty happy life. It’s not like I’ve been incredibly unhappy at times or incredibly happy at others and it’s been born out of arguing things out in my mind. Each of my songs is about something, but the album’s not about anything. It’s not my African album, or my album about the death of my father or any of that shit. It’s just like a load of pop songs. It’s like a Kinks album. Someone said to me the other day, “I like your new album, Wes, but it’s too varied.” And I thought, thank God for that. Because nothing’s varied nowadays. Everything’s completely unvaried. It’s the this album, the that album; all the bands sound the same, even their albums sound alike.

AC Your words are very witty and to catch that wit, you need to be paying a lot of a attention. But you also need to know a few other things. For instance, there’s a line in one of your songs that says, “The bed’s the same size without you,” which would imply that you already know the Police song, “The Bed’s Too Big Without You.” Do you ever worry about people not understanding your songs?

JWH You don’t have to know everything about Picasso to like his paintings and I don’t think you have to understand things to enjoy them. I don’t like people asking what it’s about, because I’m against interpretation. I think having said that, I do it to a lot of other people, people I like, because it’s my way of paying tribute to them. So I understand why people do it. I mean there was a line on my last album which went, “Bring on the magic sponge.” Nobody in America knows what a magic sponge is. But every Sunday afternoon in England on the big match, Brian Moore would say “And here comes the trainer with the magic sponge.” Lots of English people know that, but Americans don’t. It doesn’t matter. They sing along anyway.

AC I think that any artist needs a response from his audience to keep going. Do you think that way?

JWH No, I don’t think like that. I mean I make the records because they’re to my taste. I make them like I like them because I like them that way. There’s no point to making music, apart from the most people getting the message. The more people that get the message, the more successful the music is. Having said that, there’s a few places that I’m not prepared to let so and so produce the album because it might sell a lot of copies. There’s a lot of ways I can do exactly what I want to do and then try to get as many people to hear it as possible. People say that small record labels are good and big labels are bad. Well, that’s wrong. Big labels are good and small labels, well, they’re not bad you know, but you’re making the music to be heard. It’s just a silly, old argument like all those other silly, old arguments, like isn’t acoustic guitar better than electric guitar?

AC No, it’s not a better thing.

JWH But some people think it’s morally superior to play the acoustic guitar. What a dumb thing to say.

AC Who thinks that?

JWH Yeah, every Tracy Chapman fan in the entire world thinks that.

AC There’s a note on your album that says there are no machines.

JWH That’s not my note though; it was my producer’s. I put it on because he wanted the note. I’ve got nothing against machines. But I personally like the sound of human time rather than [drum] machine time.

AC Do you want to do anything else beside music?

JWH Yeah, there’s a few things I fancy doing. I’m a better actor than I am a musician.

AC What about writing?

JWH I’m a better writer than I am a musician as well. I’ve just had a book out actually.

JWH Collected Stories 1990. They’re the lyrics to my songs written as stories.

AC Tell me, when you write a song about somebody or a situation is there a particular pattern in which the ideas come to you? Because to write a song about something, you’d think someone had been thinking about it awhile. Or at least that it had bugged them to such a degree that they wanted to express something about it. How do you think those things come about with you? Have you noticed a pattern?

JWH In the actual creation, yeah. Things start to bug me and then I start to think about them and then sometimes I think, I just can’t make that into a 24 line song—I just can’t fit it into 24 lines.

AC So, what are you going to do next?

JWH It’s been a long year. I don’t think I’m going to move to New York. I’m going to get a place in San Francisco. That’s where the person I want to live with wants to live, too.

AC Is it difficult being in different places all the time and being so busy?

JWH It’s great for me to be so busy, I’ve just finished being a student.

AC What were you studying?

JWH I got a degree in English. Then I got a PhD in Social and Political Science.

AC Where were you and where did you study?

AC Really, I did all of my adolescence in Cambridge. Did you like it there?

JWH I had quite a good time, but I got sick of it. Then they offered to let me stay and do a PhD, which was great. But then I didn’t know what to do with it, so I decided to concentrate on being a rock star.

AC Did you really want to be a rock star?

JWH No, but I did want to go and play my songs a bit.

AC Did you play in Cambridge?

AC So, how did it start?

JWH Um, I just started learning to play guitar while I was at Cambridge. I’ve only been playing it five or six years now. You don’t need much to write a song. I started writing songs really early, probably before I was any good. And that was that.

Andy Craft is an English musician living in New York.