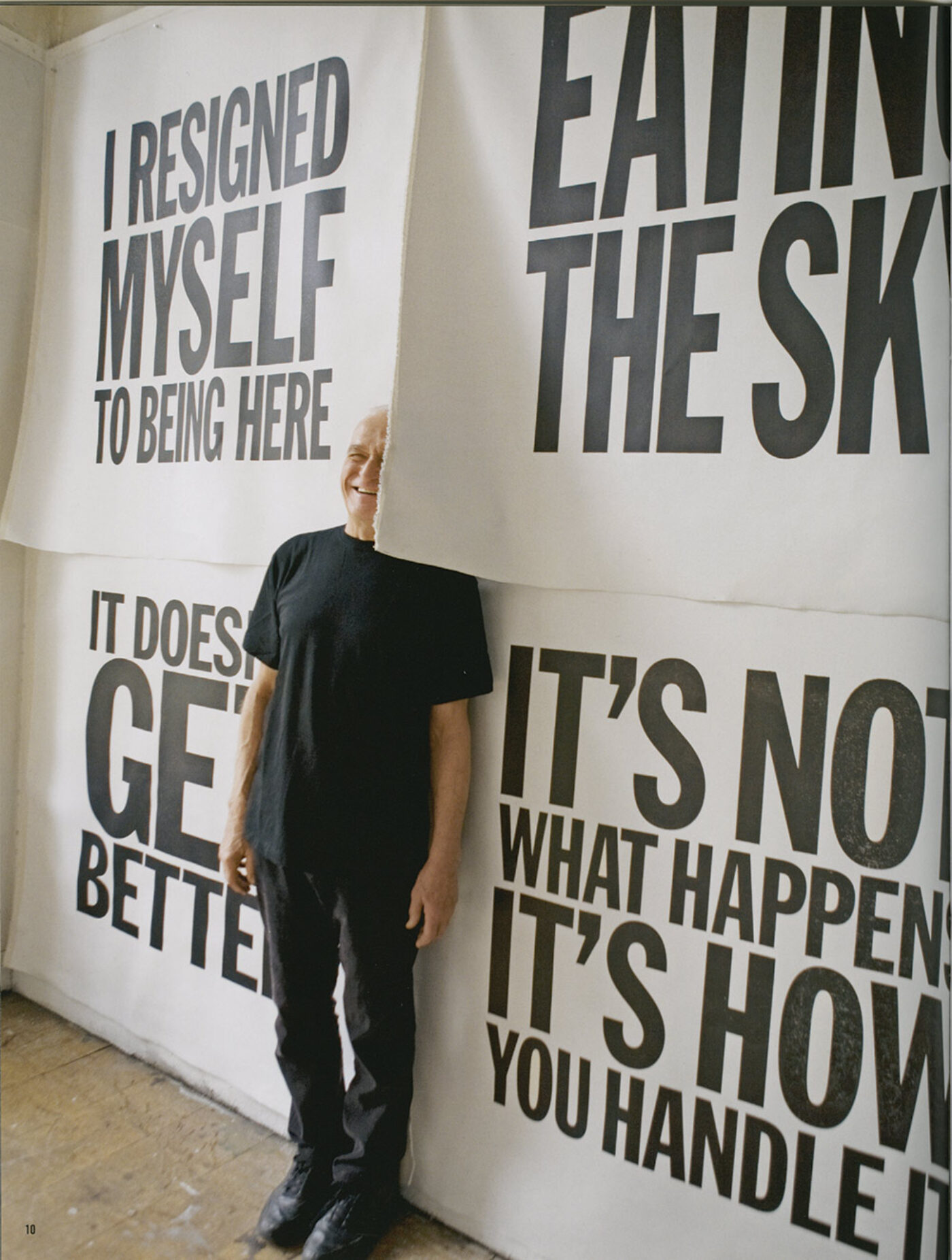 thanks for allowing me to be a poet

a noble effort, doomed, but the only choice.

John Giorno’s influence as a cultural impresario, philanthropist, activist, hero, and éminence grise stretches so widely and across so many generations that one can almost forget that he is primarily a poet. His work is a shining example of how, at their best, poems can act as a form of public address. Giorno recalls hearing that a young man in San Francisco was about to attempt suicide, but changed his mind when he overheard Giorno’s poem “Suicide Sutra” on the radio.

Eileen Myles once remarked, “What is so great—I’ll even say holy—about reading a poem for the first time in front of people is that you’re sharing what you felt in the moment of composition, when you were allowing something.” Giorno’s poems allow everything: desire, jealousy, loneliness, boredom, hatred, contempt. The raw emotions are extremely appealing to younger people, and Giorno himself has hardly mellowed with age. “Huge hugs to the friends who betrayed me, / every friend became an enemy, / sooner or later, / big kisses to my loves that failed,” he writes on the occasion of his seventieth birthday in “THANX 4 NOTHING.” The bad blood in Giorno’s work is tempered by a Buddhist worldview that accepts every emotion as part of a cyclical movement toward clarity, which, like all else, will turn to dust. 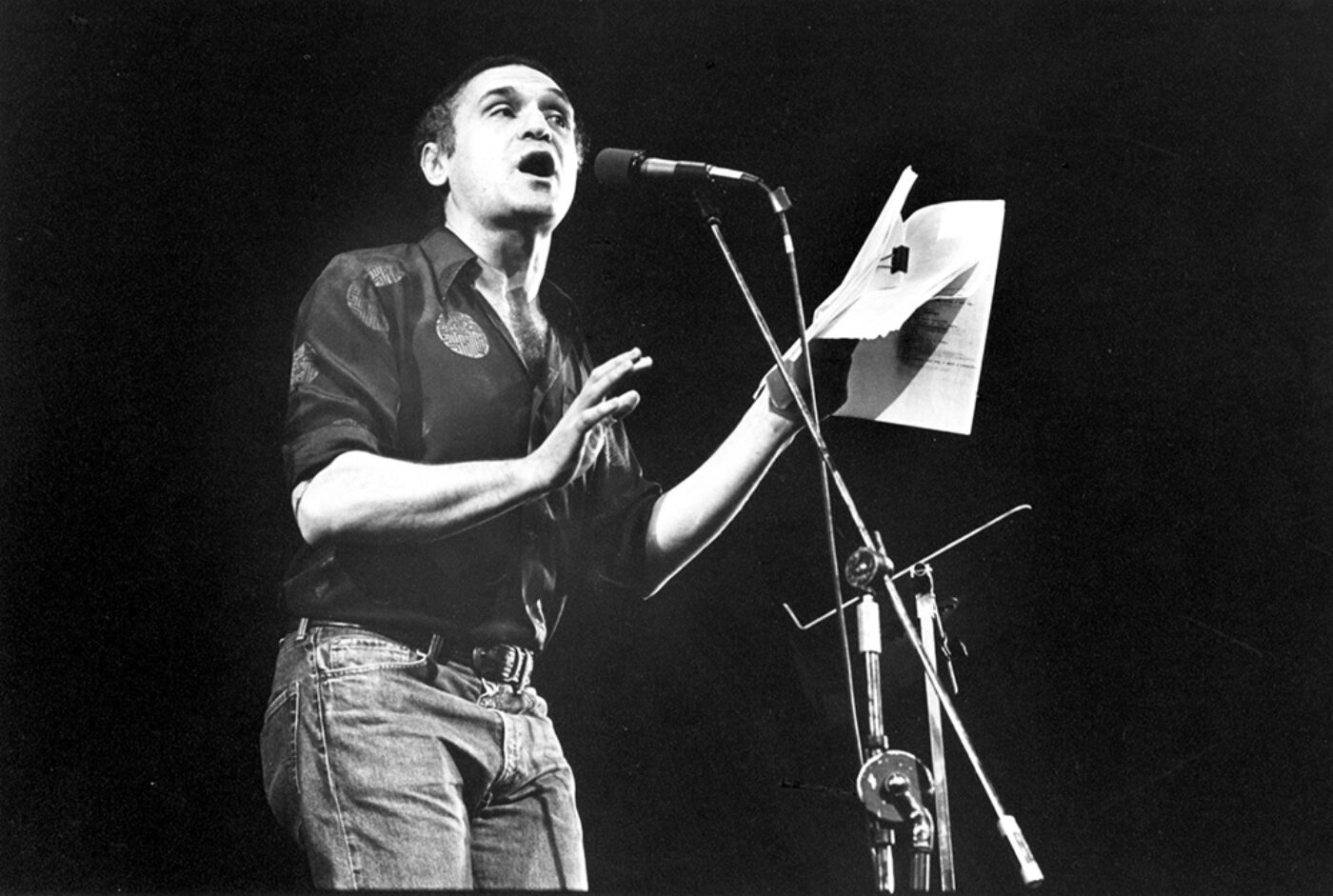 Giorno performing at the Nova Convention, 1978. Photo by James Hamilton.

Giorno’s activities over nearly six decades have been so exhaustive and diverse that he’s become a person much larger than any one medium or artistic lineage—which could be why his notoriety hasn’t kept pace with the expansiveness of his work. This isn’t to say that he is unknown. Giorno has been a highly respected creative force since the 1960s, when he cavorted with the likes of Andy Warhol, Robert Rauschenberg, Jasper Johns, and William S. Burroughs—some of whom were his lovers, and all of whom played important roles in the development of his work. Giorno saw that their strategies of collage and appropriation could be transposed to the composition of poems.

Published the same year as Frank O’Hara’s Lunch Poems (1964)—a time when the poet’s “I” ruled—Giorno’s The American Book of the Dead was audaciously composed from found material. Prefiguring works by contemporary poets like Kenneth Goldsmith and Vanessa Place, Giorno’s Book of the Dead spun poems from fragments of the Declaration of Independence, rock and roll lyrics, and tabloid news. And yet the work invokes pathos: Giorno’s recital of appropriated text springs from an emotional core, presenting small urban scenes of absurdity, disappointment, and injustice in counterpoint to the Declaration’s grand ideals.

Three years later, Giorno worked with the inventor of the synthesizer Bob Moog to create ESPE (Electronic Sensory Poetry Environments), where he electronically twisted and looped his own voice while reciting his poems. Freeing writing from the page, Giorno allowed his audiences to step into the physical space of his poems and strongly influenced techno-punk music pioneers like the bands Suicide and Throbbing Gristle. Yet it’s not Giorno’s use of technology that makes his work memorable, but the sound and texture of his voice. The artist Penny Arcade saw him perform at the Poetry Project in 1969, and said, “I was never the same.” I heard him present his poem “Grasping at Emptiness” at 1978’s Nova Convention, which he organized with Sylvère Lotringer, and I hear his voice still: sinewy, whiny and bold; assertive and longing, but poised. 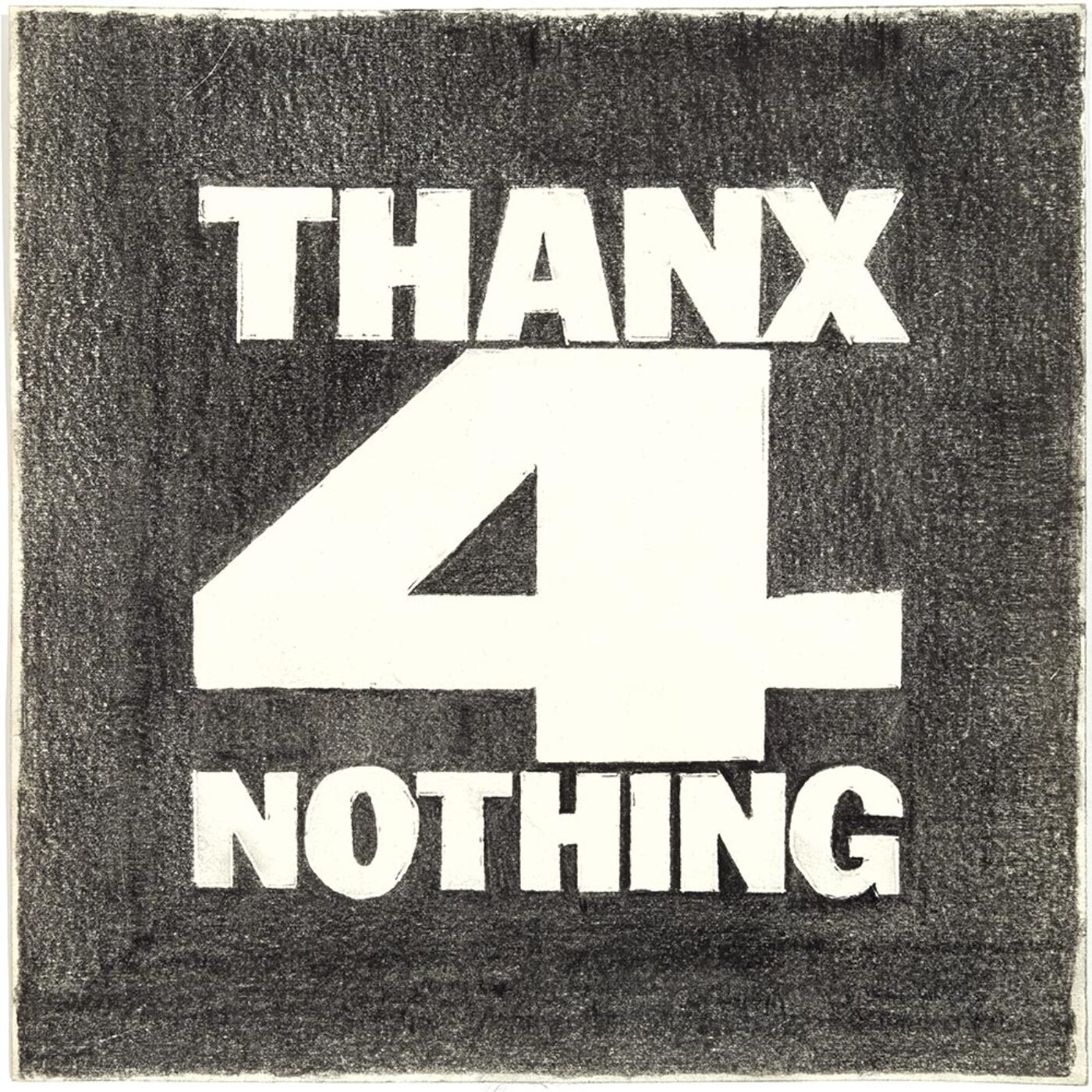 By 1972, Giorno had devised what would become an important part of his signature style: including the echoey loop of his voice in the poem as it appears on the page. The vast body of work he created in the 1970s, collected in Cancer in My Left Ball (1973), Subduing Demons in America (1974), and Shit Piss Blood Pus and Brains (1977), indelibly crystallizes that era. Composed as a series of echoes, the poems capture the claustrophobia in anyone’s head as they walk the streets of New York. Whether he’s reflecting on the news, relationships, isolation, depression, addiction, or sex, Giorno affixes language to the swirling, reverberating fragments in the human mind: “like when you’re sitting / in a telephone booth / just after we’ve hung up, / completely / boring / completely boring / and completely / sad / and completely sad” (from “Eating the Sky”).

His Buddhist practice became key, his poems an attempt to burn through the ego and arrive at a point where the existence of others becomes as real as the self. His work is full of these less-than-glorious moments that are really just ordinary. He never plays them as coyly abject self-aggrandizement. They describe any life at that particular time. 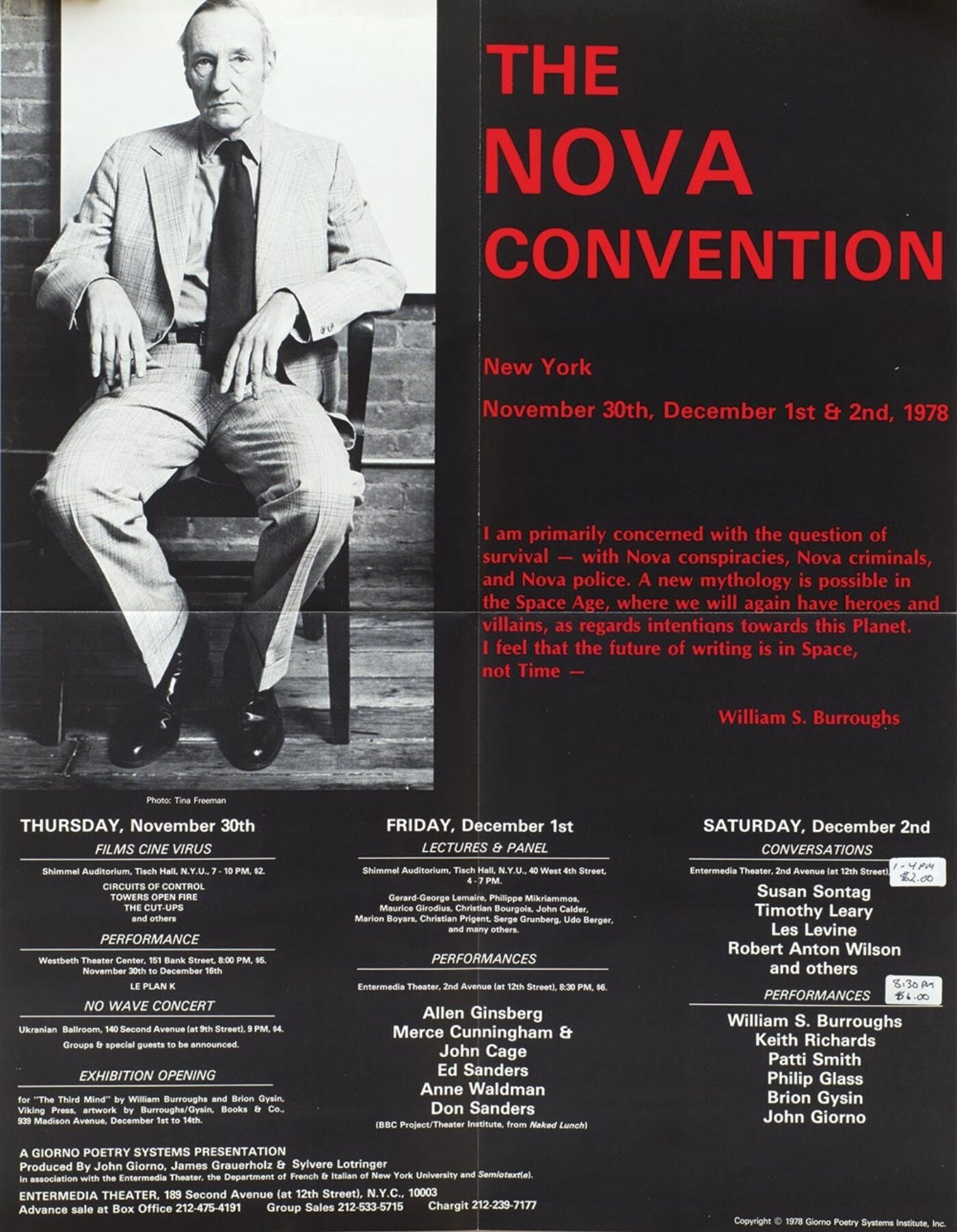 Giorno’s poetics are marked by generosity and hospitality. That spirit isn’t confined to his poems. For decades, his poetry, his social work as the founder of the AIDS Treatment Project, and his activities as a music producer have been virtually inseparable. His groundbreaking Dial-A-Poem project, begun in 1968, is known for the participation of luminaries like Burroughs, Patti Smith, and John Ashbery, but the project presented dozens of lesser-known writers like Susie Timmons, Greg Masters, Rochelle Kraut, and Steve Levine. The various poetry worlds are notorious for their exclusionary hierarchies and cliques, but Giorno’s strategy has always been to widen the circle, turning his competitors and imitators into collaborators. As Eleanor Antin once said, “All good artists are poets.” Giorno is such an extraordinary artist that his poetic achievements have yet to be fully appreciated, but it’s time for the world to catch up.

Chris Kraus is the author of four novels, most recently Summer of Hate (Semiotext(e), 2012), and two books of art and cultural criticism. Her biography of Kathy Acker will be published in August by the MIT Press. She lives in Los Angeles and teaches writing at the European Graduate School. She is a contributing editor of BOMB.

Rebecca Waldron is a writer, critic, and filmmaker. She lives in Los Angeles, where she works for Semiotext(e). Her writing and other projects can be found at themusing.net.