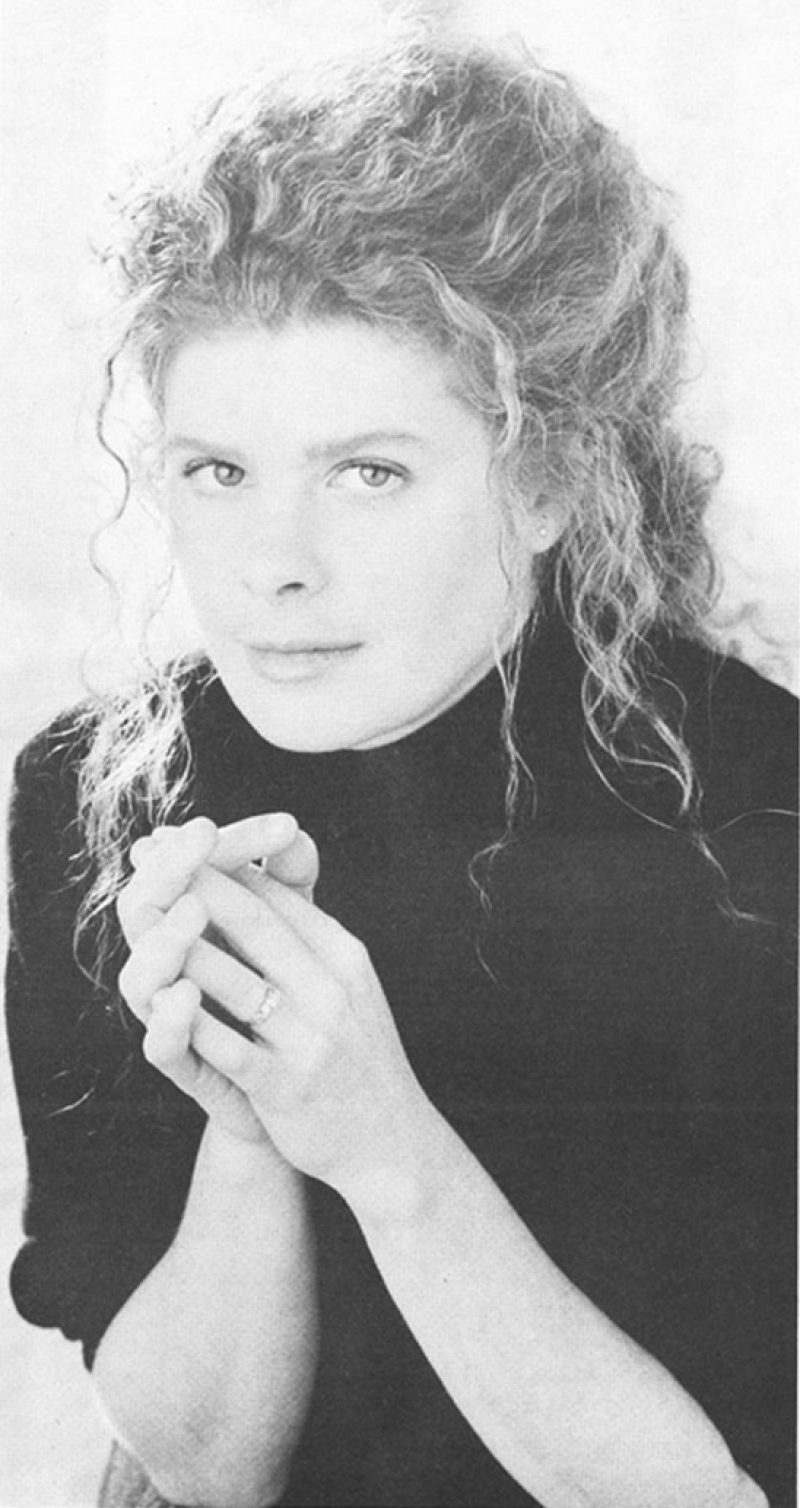 Jill Eisenstadt, the author of two books, From Rockaway (Knopf, Vintage) and the just published Kiss Out (Knopf) said of this piece, “This is really more of a conversation than an interview.” This conversation took place over lunch the first time we met. I found Jill to be exactly like her writing: smart, warm, incisive, and completely unpretentious. And, just like her writing, she seems like an old friend.

Ethan Silverman Let’s start with one of my favorite subjects, sex. In both Kiss Out and From Rockaway, you had an incredible insight into male sexuality. Do you talk to your husband about that?

Jill Eisenstadt I wouldn’t say that we talk about it, but I’ll ask him whether he thinks that it’s believable and he usually says, yes. Actually I find men easier to write about than women, and easier to write from a male point of view than a woman’s. It will probably take someone else to figure out why.

ES I find it much easier to express something creatively from a woman’s point of view.

JE It’s common. It gives you some distance; in the same way it’s easier to write about what you aren’t, or who you haven’t been, or where you’re not.

ES But your standing back really gets inside a very pure, male sexual urge. The male protagonists of both books are unhappy with their sex lives. They want more. And they want to express themselves sexually. That’s very internal. Would you agree with me, first of all, about the characters?

JE Yes. Men seem to be more simple in their sexual urges than women. In women, it’s all complicated and bound up with emotional things. I’m not sure it’s the same with men, I don’t know.

ES Are you jealous of that?

JE Yes. Are you telling me that I write well from a male’s point of view for a woman?

JE If I put a male pseudonym on the book, you wouldn’t question it?

ES No. What I would say, if you put a pseudonym on the books, is that you’re more in touch with men’s vulnerabilities than most. You’re more honest.

ES It’s very particular, the bridge from adolescence to adulthood, accepting responsibility in a different way, I just thought you were very intuitive, that’s all.

ES And not judgmental, which is good. It’s too easy to judge working-class kids who are lifeguards, drink a lot of beer, and beat each other up. Or guys who work in pet shops and sing in Grade D bar mitzvah bands.

ES Yes! We are all multifaceted. As much as feminism has helped women get equal pay and rise to positions of prominence, it’s done a lot to separate the sexes. And that’s sexism of the worst kind. So I’m always thrilled when someone is very involved with the opposite sex’s point of view.

JE Well, I may make a lot of enemies by saying this, but the idea of women’s literature or black literature or Indian literature or Korean literature as separate categories seems reductive and divisive. I’m trying to write the best book I can, that’s doing a lot more for women than complaining.

JE Plenty. I was really taken with Geek Love.

JE I was amazed that it was nominated for a National Book Award, even though it didn’t win.

ES She’s lucky. That’s one book that will never be able to be made into a movie.

JE I don’t know, someone might try, think of Freaks.

JE So, are you just asking me about women writers?

JE I would say that García Márquez is the greatest living writer.

JE Love in the Time of Cholera I have to read again when I’m 45.

ES Do you think that a lot of great literature, art, whatever, is based on not getting something?

JE The real challenge with Claire was to have a passive character and not make the writing seem passive. She just doesn’t know what she wants. She doesn’t really do anything. She needs to belong to something. Carson McCullers’s The Member of the Wedding was a really big book in my adolescence.

ES For me, it was To Kill a Mockingbird with all that kind of Southern …

ES Everyone, no matter where they are in the world, when they reach a certain age, can identify with …

JE The Catcher in the Rye …

ES … the unattainable. In the ’70s and ’80s, sex became obtainable, but that didn’t make love any more attainable.

JE I think it made it less, actually. It made it more confusing.

JE Sometimes, I worry about it because someone like my grandfather, I don’t think he gets very much out of my work.

ES Does he read your books?

JE He read my first book and the only thing he said was, “I hope you don’t know these people.”

ES (laughter) You are trying to do something very different plot-wise than you’ve done before, which is to have a plot-driven book.

JE I’m probably selling myself short by admitting this, but that was the whole aim, to write a novel with a plot, and see if I could do it.

ES Do you have a work ethic? “I’ve got a job to do. I’ve got to get up this morning and go and write and turn out material, meet a deadline.”

JE Not a deadline because that scares me into not doing anything. But it is a job, which, now that I’ve chosen this thing with which I try to make a living, has made it less fun. I’ve just started trying to break into writing travel pieces, I wrote two for the Times, and I’m going to write another one.

ES Where are you going?

JE I’m going to Germany because From Rockaway is coming out in German. So I got an assignment to write about the beer halls there.

ES You’re kidding me! For the New York Times?

ES So now, Michael Drinkard, your husband, is a novelist, and you work together at home?

ES How many rooms is your place?

JE We only have a one bedroom now.

ES So, do you work in the same room?

JE No, he works in the living room/ kitchen part, I work in the bedroom part. We can close the door. I get more done having that sort of barrier against digression. Someone else working inspires you to sit down and just do it.

ES You’ll still be writing about the outer boroughs?

JE Perhaps. I had a teacher at Columbia who’d always encourage me and he was really into outer-borough fiction. That’s not what I’m doing, but that’s what some people call it. I saw Queens Logic the other night. I was watching that movie and thinking, did I write this movie? I didn’t think my two books were alike, but somehow the movie had elements of them both …

ES From Rockaway is darkly sentimental, and Kiss Out exuberantly goofy, but with resonance and not without restraint. From Rockaway reaches a different part of your soul, than Kiss Out.

ES No! Not at all! Definitely not, it’s just a different feel.

JE You know, part of it was a response to people not really thinking From Rockaway was even partly funny. It’s just so rare when you read a book and laugh out loud. That’s the thing about being an adult, when was the last time you were laughing so hard that you were in pain?

ES I’m lucky, you see I live with someone who makes me laugh. I mean like nobody’s …

JE When you were a kid you would laugh that hard every day.

ES I know, I know. I loved laughter.

JE Especially now after the war and all.

ES You should come, you should write about my family. Because my family screams and yells so much, people get frightened sometimes at how loud the voices get. But we laugh like nobody else, we laugh so hard that people literally fall down.

JE You should write about them.

ES Oh yeah. I guess I should.

JE Not me. (laughter) I should write about my family, too, and I’m kind of waiting because I feel …

ES Do you write about your family?

JE I sort of do. I don’t believe that a writer should hold back from writing about their family, but I have personal feelings with not wanting to hurt people.

ES Hurting people … I don’t think anything’s worth a good book, nothing.

JE I know, I don’t think it’s worth it. Am I really going to create such a masterpiece that it’s worth making my mother not talk to me for the rest of my life?

Ethan Silverman is a theater director and screenwriter.